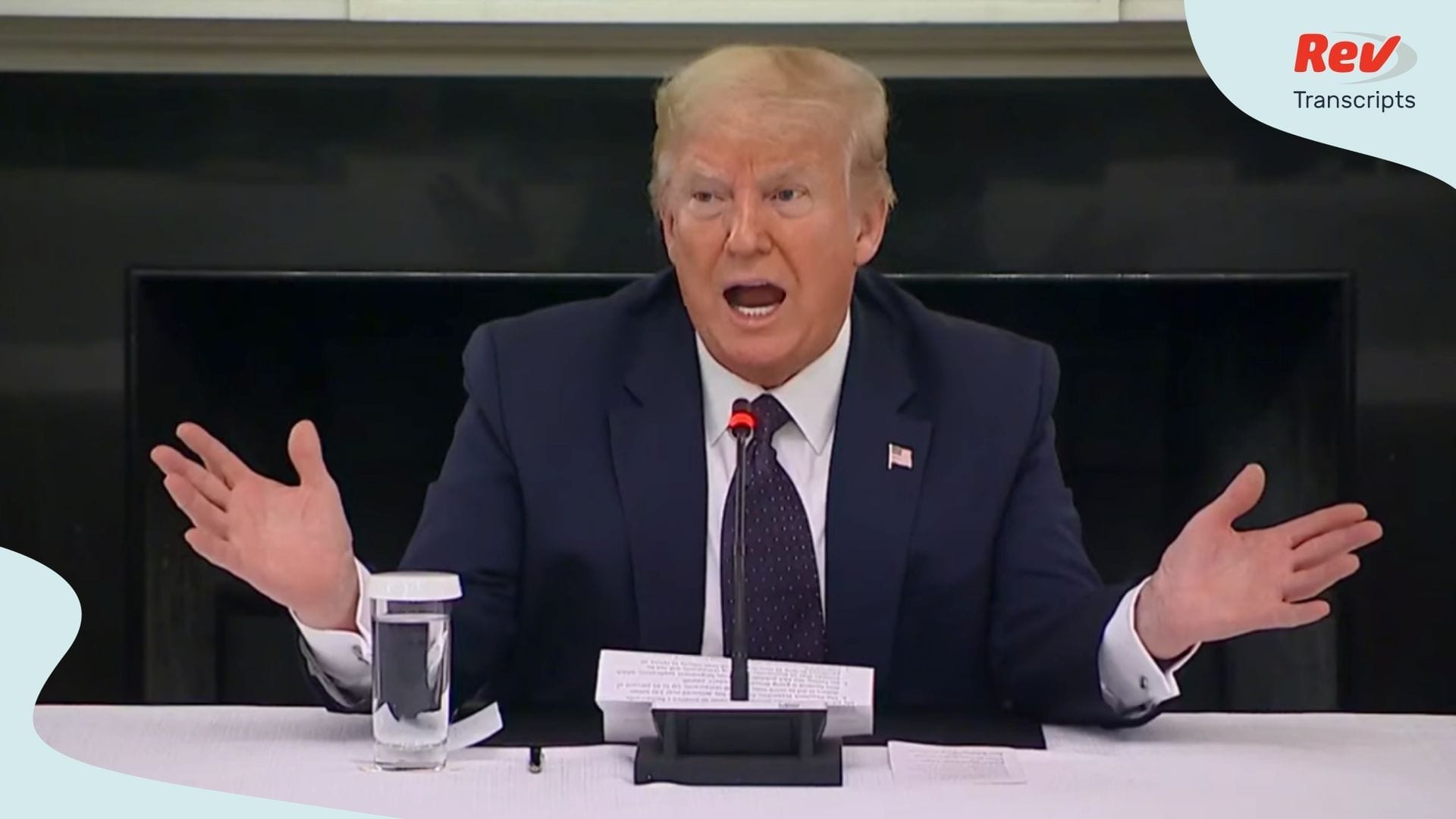 Donald Trump said today that he started taking drug hydroxychloroquine, a malaria & lupus drug he’s been touting for months, a “couple of weeks ago” and that many front line doctors and workers are taking it. He explained that he’s “heard a lot of good stories” about it and that he’s “not gonna get hurt by it.” Read the transcript here.

Donald Trump: (00:20)
I’m taking it, hydroxychloroquine. Right now. Yeah. Couple of weeks ago I started taking it. Because I think it’s good. I’ve heard a lot of good stories. And if it’s not good, I’ll tell you right. I’m not going to get hurt by it. It’s been around for 40 years for malaria, for lupus, for other things. I’d take it. Frontline workers take it. A lot of doctors take it. Excuse me. A lot of doctors take it. I take it. Now, I hope to not be able to take it soon because I hope they come up with some answer. But I think people should be allowed to. I got a letter from a doctor the other day from Westchester, New York, around the area. He didn’t want anything. He just said, “Sir, I have hundreds of patients and I give them hydroxychloroquine. I give them the Z-Pak, which is azithromycin. And I give them zinc. And out of the hundreds of patients, many hundreds, over 300 patients, I haven’t lost one.” He said, “Please keep pressing that, sir.”

Donald Trump: (01:19)
And if you look at that phony report that was put in, that report on the hydroxy was given to people that were in extraordinarily bad condition, extraordinary bad. People that were dying. No, I think for whatever it’s worth, I take it. I would have told you that three, four days ago, but we never had a chance because you never asked me the question.

Media: (01:42)
Did the White House doctor recommend that you take that? Is that why you’re taking it?

Donald Trump: (01:46)
Yeah, White House doctor. He didn’t recommend it. No, I asked him, “What do you think?” He said, “Well, if you’d like it.” I said, “Yeah, I’d like it. I’d like to take it.” A lot of people are taking it. A lot of frontline workers are taking hydroxychloroquine. I don’t take it because hey, people said, “Oh, maybe he owns the company.” No, I don’t own the company. You know what? I want the people of this nation to feel good. I don’t want them being sick. And there’s a very good chance that this has an impact, especially early on. But you look at frontline workers, you look at doctors and nurses, a lot of them are taking it as a preventative. And they’re taking, totally unrelated, but they take the Z-Pak or the azithromycin for possible infection. Now, I haven’t taken that other than an original dose because all you need, you don’t have to take it simultaneously. But the zinc, you do take. So I’m taking the two, the zinc and the hydroxy. And all I can tell you is so far, I seem to be okay.

Media: (02:47)
Can you explain, sir, though, why you started taking it? Have you been exposed?

Donald Trump: (02:51)
No. No, not at all. I just said that I’ve had so many letters from people like the one I told you about, I got it last week. Would you like a copy of it? I’d love to give you … If you ask Molly, she’ll give you a copy of it. But this is a doctor. He doesn’t want anything. I don’t know him, never heard of him. But he treats people that we’re talking about. And he said out of hundreds of people that he’s treated, he hasn’t lost one. And he just wanted me to know about it. That’s all. He wasn’t saying, “Gee, can I have dinner with you, Mr. President? I’d like to come to the White House.”

Donald Trump: (03:21)
But I’ve received many such letters. I’ve received a lot of positive letters. And it seems to have an impact. And maybe it does, maybe it doesn’t. But if it doesn’t, you’re not going to get sick or die. This is a pill that’s been used for a long time, for 30, 40 years on the malaria and on lupus too. And even on arthritis, I guess, from what I understand. So it’s been heavily tested in terms of … I was just waiting to see your eyes light up when I said this, when I announced this, but I’ve taken it for about a week and a half now and I’m still here. I’m still here.

Media: (03:59)
Can you explain, sir, though, what is the evidence that it has a preventative effect?

Donald Trump: (04:04)
Here we go, you ready? Here’s my evidence. I get a lot of positive calls about it. The only negative I’ve heard was the study where they gave it, was it the VA? With people that aren’t big Trump fans gave it. And we’ve done the greatest job, maybe of anything in the VA, because I got VA Choice and VA Accountability both approved. Accountability, Tillman, is where you can fire bad people that work in the VA that you couldn’t fire them. We had thousands of people that were sadists, that were stealing, that were robbers, that were horrible people. They’d beat up our veterans. They couldn’t do it in primetime, but they did it when they were sick. And we got accountability. Nobody thought you could get it because of the unions and civil service. I got it passed so that now you fire bad people in the VA. We got rid of tremendously bad people that should never been there.

Donald Trump: (04:53)
But I also got, probably even more importantly, if you can say that, maybe not, VA Choice. So if you have to wait on line for a doctor, you go outside, you have a private doctor, we pay the bill. We work out deals with doctors. We have pricing. So you go out and you pay the bill. And it was a great thing that we did. So we’ve done a great job with the VA, but they had a report come out. And the results of the report, it was very unscientific report by the way.

Donald Trump: (05:35)
Every day, I take a pill every day. At some point, I’ll stop. What I’d like to do is I’d like to have the cure and/or the vaccine and that’ll happen, I think, very soon.

Donald Trump: (05:49)
Zero symptoms. No, I haven’t had any. No, I tested. I test every couple of days, they want to test me, for obvious reasons. I mean, I am the President. So they want to test me. I don’t want to be tested, but they want to test me. So every couple of days I get tested. And I’ve shown always negative, right? Negative. Is that the term you use for this? Right? Negative. Totally negative. No symptoms, no nothing. But no, I take it because I think I hear very good things. Again, you have to go to frontline workers. Many frontline workers take it and they seem to be doing very well.