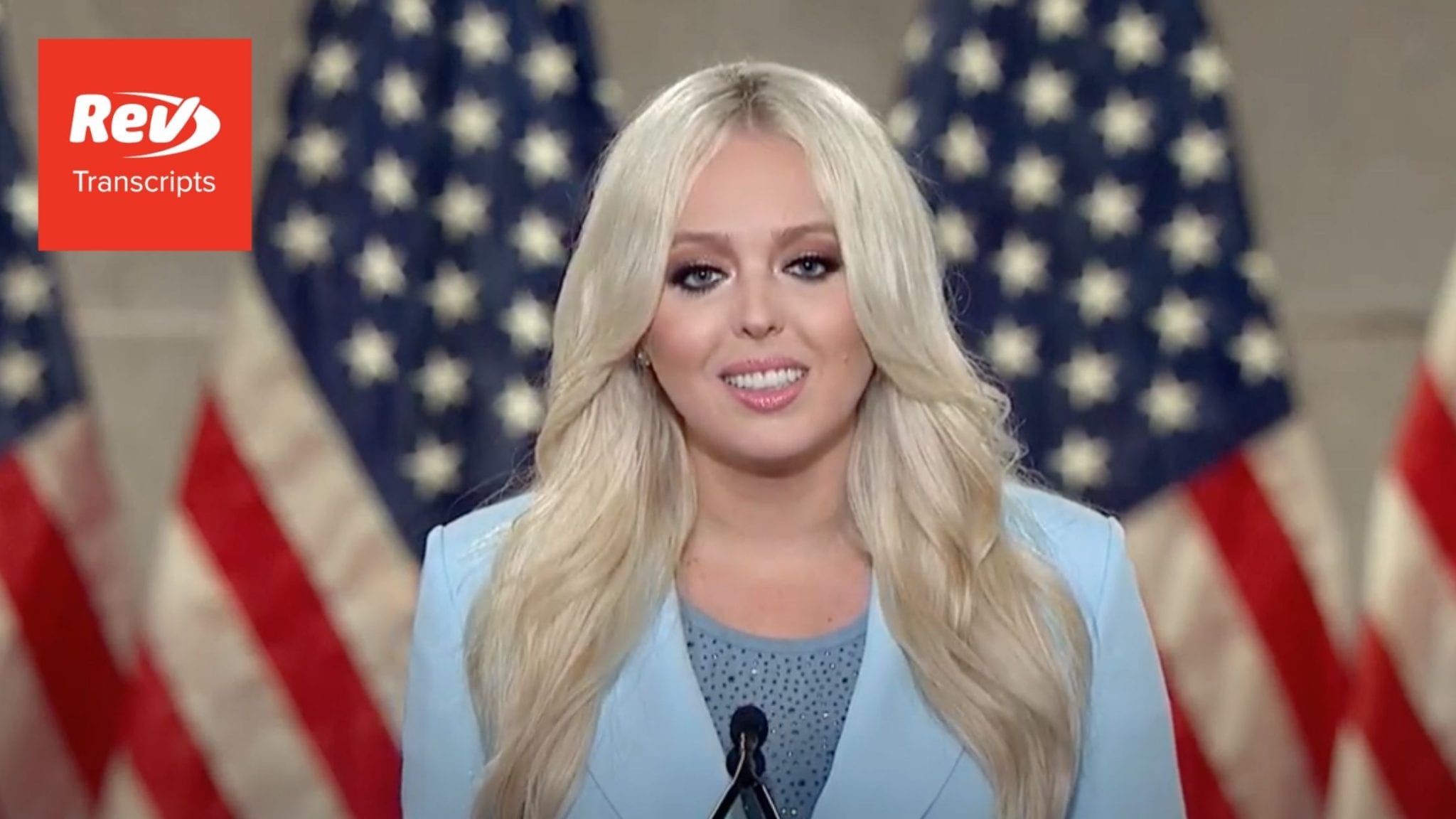 Tiffany Trump: (00:00)
I’m Tiffany Trump. Since speaking at the Republican convention four years ago, so much has changed for the world, for our country, and for my family. Like so many students across the world, I graduated from law school during the pandemic. Our generation is unified in facing the future in uncertain times. And many of us are considering what kind of country we want to live in. As a recent graduate, I can relate to so many of you who might be looking for a job. My father built a thriving economy once and believe me, he will do it again.

Tiffany Trump: (00:39)
This election, I urge each and every one of you to transcend political boundaries. This is a fight for freedom versus oppression, for opportunity versus stagnation, a fight to keep America true to America. I urge you to make judgment based on results and not rhetoric. If you believe in criminal justice reform, there is only one president that passed The FIRST STEP Act, giving people a second chance, a chance at a life once again.

Tiffany Trump: (01:13)
And if you believe in expanding quality and affordable healthcare, only President Trump, my father, signed the Right to Try into law, the Favored Nations Clause, and other actions to lower drug prices and keep Americans from getting ripped off.

Tiffany Trump: (01:31)
People must recognize that our thoughts, our opinions, and even the choice of who we are voting for may and are being manipulated and visibly coerced by the media and tech giants. If you tune into the media, you get one biased opinion or another, and what you share, if it does not fit into the narrative that they seek to promote, then it is either ignored or deemed a lie, regardless of the truth. This manipulation of what information we receive impedes our freedoms. Rather than allowing Americans the right to form our own beliefs, this misinformation system keeps people mentally enslaved to the ideas they deem correct. This has fostered unnecessary fear and divisiveness amongst us. Why are so many in media and technology, and even in our own government, so invested in promoting a biased and fabricated view. Ask yourselves, why are we prevented from seeing certain information? Why is one viewpoint promoted while others are hidden? The answer is control, because division and controversy breed profit.

Tiffany Trump: (02:49)
But what are the consequences when only one side of the story gets out or when only one viewpoint is acceptable? For our education system, it meant sacrificing civil debate by creating an atmosphere where students with contrary opinions are too afraid to speak. Many students find themselves suppressing their beliefs to fit into what the acceptable group think is.

Tiffany Trump: (03:14)
In short, our nation suffers by inhibiting our diversity of thought and inclusion of ideas. Working together outside of our political comfort zones will accomplish so much more. Some cynical politicians do not seem to believe in the miracle of America. Well, I do. As Maximo Alvarez said so eloquently last night, if freedom is lost in this country, there is nowhere else to go. Having hope is not weakness, and believing in miracles is a gift from God.

Tiffany Trump: (03:52)
So tonight I want to tell you the uncensored truth of what we believe in. We believe in equality of opportunity. We believe in freedom of thought and expression. Think what you want, seek out the truth, learn from those with different opinions and then freely make your voice heard to the world. We believe in school choice because a child’s zip code in America should not determine their future. We believe in freedom of religion for all faiths. And we believe in the American spirit, a country founded on ideas, not identity, a country where our differences are embraced and the only country where the word dream has been attached to it. Because in America, your life is yours to chart. So if you’re hearing these things and thinking to yourself, “That is the kind of country that I want to live in.” Well, whether you realize it or not, you are a Trump supporter.

Tiffany Trump: (04:55)
I encourage you to see beyond the facade that so many other politicians employ. They mask themselves in disguises of decency as they try to pressure us to mask our own identities and beliefs. My father is the only person to challenge the establishment, the entrenched bureaucracy, big pharma and media monopolies, to ensure that Americans’ constitutional freedoms are upheld and that justice and truth prevail. My father does not run away from challenges even in the face of outright hatred, because fighting for America is something he will sacrifice anything for. He dreams big dreams for our country, and he is relentless at achieving them.

Tiffany Trump: (05:42)
You see, Make American Great Again is not a slogan for my father. It is what drives him to keep his promise of doing what is right for American citizens. The energy of change and opportunity is with us. God has blessed us with unstoppable spirit. His spirit, the American spirit. My dad has proven to be driven by that spirit. He has demonstrated his faith in his uncompromising heart and actions. My father has made me believe that America can truly be great again.

Tiffany Trump: (06:18)
If you care about living your life without restraints, about rebelling against those who would suppress your voice, and building your American dream, then the choice in this election is clear. A vote for my father, Donald J. Trump is a vote to uphold our American ideals. Be true to yourself and stay true to the dream of America. Thank you, and God bless you all.