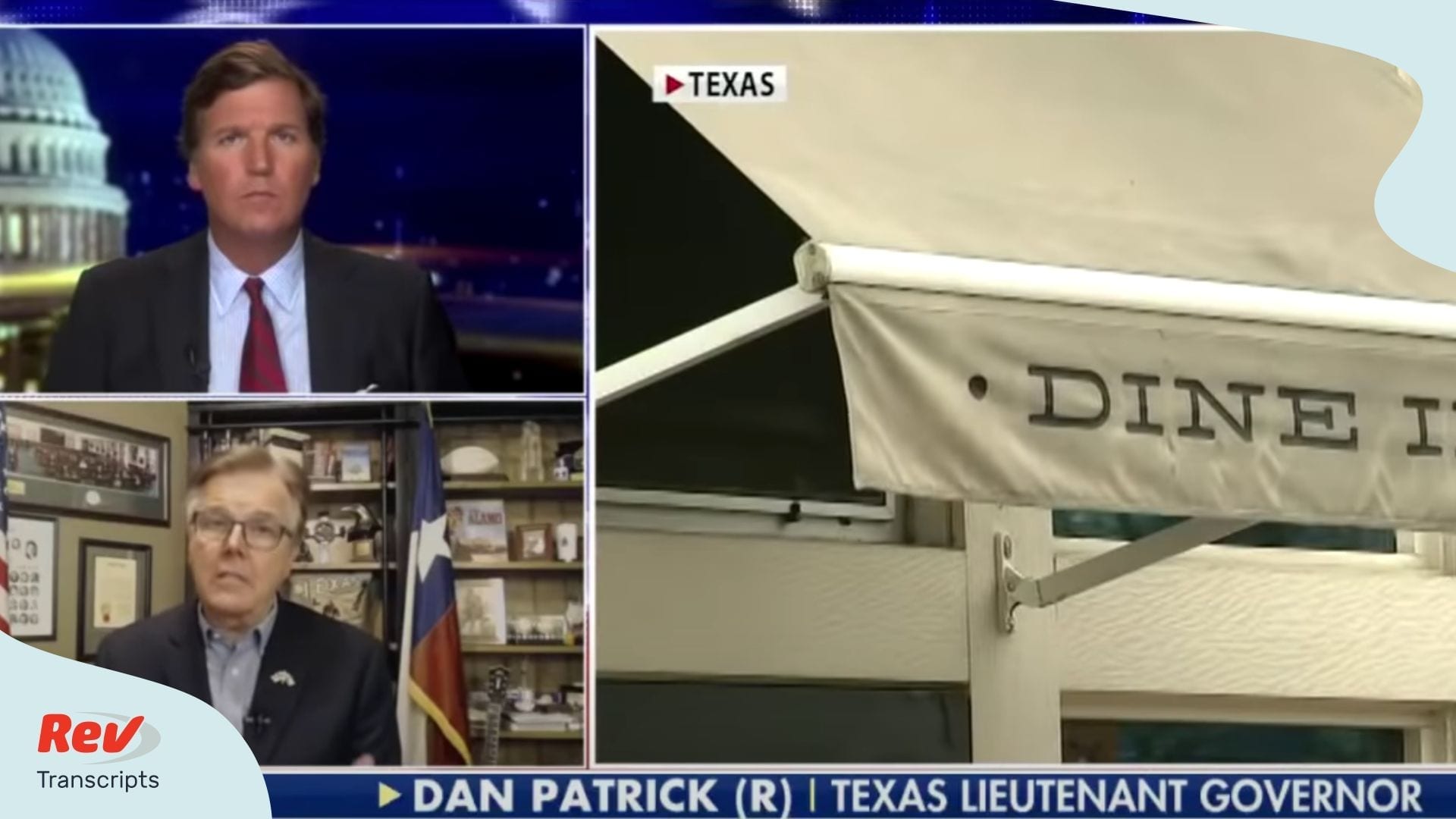 Lieutenant Governor of Texas Dan Patrick is getting more social media attention for an April 20 interview with Tucker Carlson. He said, “there are more important things than living and that’s saving this country,” saying he’s thankful for the reopening of Texas businesses. Read the interview transcript here.

Tucker Carlson: (00:02)
So very early on in this crisis, we welcome Lieutenant Governor of Texas, Dan Patrick, onto this program. He took a very different point of view from that of a lot of politicians at the time. It seemed brave, agree or not, but he was savagely criticized for that. He said that he was willing to assume some risk, he didn’t want to die, but obviously, but he was willing to assume some risk to himself as a man who’s 70 for the sake of his children and grandchildren. Here’s part of it.

Dan Patrick: (00:31)
I’m going to do everything I can to live. But if you said, “Are you willing to take a chance, and if I get sick, I’ll go and try to get better. But if I don’t, I don’t.” And I’m not trying to think of any kind of morbid way, Tucker, but I’m just saying that we’ve got a choice here and we’re going to be in a total collapse recession, depression, collapse in our society. If this goes on another several months, there won’t be any jobs to come back to. For many people.

Tucker Carlson: (01:02)
Well, it’s been about a month since that moment and we wanted to check in again with Lieutenant Governor Patrick who joins us today. And Lieutenant Governor, thanks so much for coming on. So you were pretty clear in what you thought might happen in our conversation a month ago. You said, “If they don’t pull us back a little bit, you’re going to see a lot of people out of work and you’re going to see the economy crushed.” Do you think you’ve been vindicated?

Dan Patrick: (01:27)
Well, I’m sorry that I’m vindicated. I wish it hadn’t happened Tucker, but I’m a small business guy and I’ve been around the block long enough to see what was going to happen when you start shutting down society and people start losing their paychecks and businesses can’t open and governments aren’t getting revenues and go on and on and on and on. So I’m sorry to say that I was right on this. And I’m thankful that we are now talk are finally beginning to open up Texas and other states because it’s been long overdue. They told us, Tucker to follow the science. Well what science? I mean, at the end of January, Dr. Fauci, who I have great respect for, said this wasn’t a big issue. Three weeks later we were going to lose 2 million people. Another few weeks later, it was 1-200,000 now it’s under 60,000. And we’ve had the wrong numbers, the wrong science.

Tucker Carlson: (02:55)
So in the meantime, in the month or so since we’ve spoken your state, which is in some ways the most robust state in a lot of ways out of 50, has really been hurt oil futures down to negative $40 bucks today, which surely is shocking. Neiman Marcus, over a hundred year old company, Texas company, Dallas company, bankrupt?

Dan Patrick: (03:16)
Yeah, bankrupt. And AOC put a tweet up today. She was glad to see the oil industry collapse. Tucker, we cannot ignore this much longer. Every month we stay closed, it’s going to take two to three months to rebuild. And the other things that the President talked about, and I think the President of the same day that I was with you one month ago to this Monday night, we both were saying the same thing. We can do two things at once. And so we’ve listened to the experts and we are doing everything we can to protect life and we have to the best of our ability. And except for New York and a few other hotspots, it’s actually the death rate has been low. And again, every life is precious. I don’t diminish one life, but our country should not have been locked down.

Dan Patrick: (03:59)
And now, I’ve always said if the Democrats ever had total control, they would put people like you and me in jail and throw away the key. And that’s what they’re doing because they now have total control Tucker, they have total control. And everywhere you see this draconian rules of locking down people and keeping businesses shut and destroying our country. It’s mostly Democratic governors, Democrat county judges, Democrat mayors, almost everywhere. And when I saw the Governor of New Jersey last week, say on your show, “”That’s above my pay grade, then you need to resign. That’s what you put your hand on the Bible when you take office. I don’t care what office it is to protect the Constitution of this United States. Don’t mock it. Don’t mock it. So now it’s time to get back to work [crosstalk 00:04:47]-

Tucker Carlson: (04:46)
And now he’s arresting people. Arresting people who criticize him. That’s handy. Lieutenant Governor, thank you for coming on. I never defend politicians, but the abuse you took was so ridiculously disconnected from what you actually said that I wanted to have you back. Thank you for that.