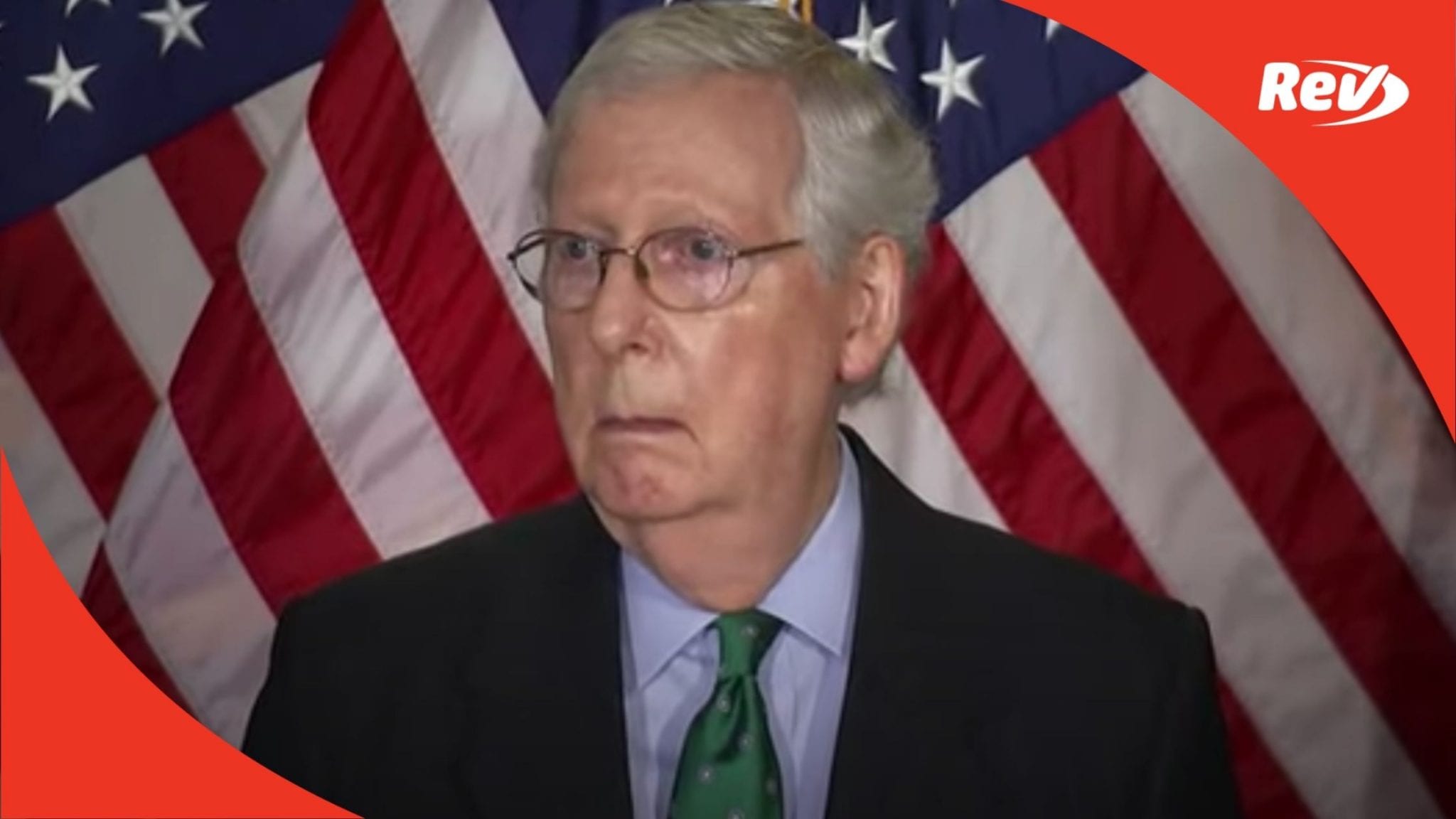 Mitch McConnell: (00:00)
Extraordinarily impressive woman with an outstanding academic record, a strict constructionist who believes in applying the constitution and the laws as they’re written and well deserves to be on the Supreme Court.

Speaker 2: (00:23)
Well, last week, a lot of the Democrats and others were objecting to or talking about the process. But I think the question about the precedent, the historical precedent for this should be settled by now. This is a very different circumstance as we’ve pointed out from 2016, but right now the focus is going to be on the nominee and the qualities that she brings to this job. And as the leader pointed out, she is extraordinarily qualified, not only in her academic resume, but in her experience and background.

Speaker 2: (00:55)
I think if you look at the cases that she has heard and been involved with since she’s been on the circuit, she’s demonstrated a really, a very acute legal mind, but also the kind of restraint that most of us want to see in a judge. Someone who will call balls and strikes, apply the laws and the constitution as written. And that’s the kind of judicial temperament and philosophy that I think we’ve seen in her already. And I think she’s going to impress everybody that she comes into contact with through this nomination process.

Speaker 2: (01:30)
I hope the one thing that they will leave alone are her faith and her family. I see some of these attacks already, and that really is beneath, and that’s something that nobody ought to tolerate for any nominee. And I hope that she will certainly, as people evaluate her, they’ll do it on her record, her accomplishments and her qualifications. And not that.

Speaker 2: (01:53)
The Democrats are talking about slowing things down here, trying to throw roadblocks into the path of the nomination. And I guess if they are willing to do that, we will be prepared accordingly. We will be here as long as it’s necessary to get this done. And if they want to drag this out, we’re happy to continue to add good judges to the district courts. And there’s a good pipeline full of judges that we can act on. And so if the Democrats want to play games with this, want to use dilatory tactics to try and keep this nominee from moving forward, it won’t come without a price. And so we’re prepared to be here, to do whatever it takes to get this nominee across the finish line.

Speaker 3: (02:39)
Well, the Democrats have truly become unhinged about the Supreme Court of the United States. I thought it was bad in the spring when Chuck Schumer was outside the Supreme Court building, yelling at the building, saying Gorsuch, Kavanaugh, you will pay the price, but it really went a lot further this past weekend when the president nominated Amy Coney Barrett to the Supreme Court.

Speaker 3: (03:10)
And this is what Schumer said this weekend, he said, “She stands against just about everything america believes and stands for”. Well, she’s a woman who believes in God and practices her faith. Most Americans believe that as well. She believes in her family, is committed to her family. Most Americans are as well. She believes in life, liberty and the pursuit of happiness. Well, most Americans do as well. But then he went further than that. He said, kids are in the crosshairs. And the liberal left has actually attacked her children. And specifically the two that she’s adopted from Haiti. But then he went further than that. He said, “With Coney Barrett on the court,” he said, “you will never, never,” he said, “be able to get insurance.” He said, “And your health will suffer dramatically.” High drama indeed from the Democrat leader.

Speaker 3: (04:10)
I mean, these are just scare tactics. I mean, this is theatrics. But clearly it is also fear-mongering. Once again, Chuck Schumer is pulling out, in terms of the Supreme Court, the playbook of personal destruction. And once again, the Democrats are going down that muddy low road of attacking personally, nominees for the court. Joe Biden perfected this when he was chairman of the judiciary committee, he did it against Judge Bork, he did it against Justice Thomas, as well as Justice Alito.

Speaker 3: (04:44)
You would have thought the Democrats would have learned their lesson after the debacle of Kavanaugh and the hearings there. The fallout from that episode continues to be a black cloud over their heads. And they paid a significant price and lost Senate seats as a result. Amy Coney Barrett is an exceptional nominee. She will do a terrific job on the Court. She will be a role model for many. You take a look at this nominee. She is someone who is ready to apply the law, not legislate from the bench, she has been vetted by the Senate, confirmed in a bipartisan vote just three years ago to a lower court. She deserves a dignified, respectful hearing and a vote.

Speaker 4: (05:37)
Let me just affirm that the President made an outstanding choice in selecting Indiana’s own Judge Amy Coney Barrett as a nominee to serve as Associate Justice of the Supreme Court of the United States. I’ve come to know Amy, I got to know over the course of her seventh circuit, court of appeals, nomination process. She’s a person of great integrity, very sharp intellect, incredibly strong work ethic, even good humor. The Democrats aren’t going to make this about her qualifications though. We all need to prepare for that. They want to make this about anything but Amy Coney Barrett’s qualifications to serve in the highest court of the land. Instead, they’re going to try and scare Americans that somehow Amy Coney Barrett wants to take away their healthcare and jeopardize people with preexisting conditions. This is a mother of seven children. One of whom has special needs. Of course, Amy Coney Barrett cares about healthcare.

Speaker 4: (06:40)
They’re going to try to make this about her faith as they did in her seven circuit nomination battle. Listen, if she takes her Catholicism too seriously for some of my colleagues, that’s their problem, that says more about that institution than it does the Supreme Court of the United States or Amy Coney Barrett. They need to remember there is no religious test for high office in this country. They’re going to once again, go down that fictitious road and try and indicate that this process is somehow illegitimate, even though it’s firmly grounded in historical precedent. When you have a President and the United States Senate, both of the same party, when a nominee has been made for the highest court in the land, in the course of an election year. So I will unapologetically, I will energetically, I will enthusiastically and ardently fight to ensure that Amy Coney Barrett gets a fair hearing. And I look forward to moving forward with this process without delay. [inaudible 00:07:52]

Speaker 5: (07:55)
So was the opportunity here. Minutian has been here today. Meadows has been here today trying to get a coronavirus bill. I know you’ve criticized Pelosi’s bill, but we’re up to the very end here, where these airlines are going to start laying off people and Disneyland and everybody else. And that seems to be that there’s an urgency here. Do you see a realistic path? And what does that path look like to get something through the Senate? I mean, if it’s not going to be that bill?

Mitch McConnell: (08:21)
Well, I’ve made it clear, and my colleagues have as well that we would like to see another rescue package. We actually had a vote on one that included by the way, coverage for preexisting conditions just a few weeks ago. Every single Democrat prevented us from moving forward with that bill, presumably because they thought it didn’t do enough. So what we see from the Speaker is another massive measure that includes such things as healthcare for illegal immigrants, tax cuts for rich people in New York and California and other things that are totally unrelated to the coronavirus. So I think it’s safe to say we’re far apart. I think a [inaudible 00:09:11] and the Speaker are continuing to speak, but we’re very, very far apart.

Mitch McConnell: (09:24)
I really don’t have anything to add beyond what I just said on that subject.

Mitch McConnell: (09:39)
Yeah, it’s too high. Yeah. I mean, we had 52 out of 53 Republicans willing to spend roughly a half a trillion dollars, highly targeted toward kids in school, education, replenishing the PPP, small business loan program, and liability protection for everyone dealing with the coronavirus, unless you were grossly negligent or engaged in intentional misbehavior. The thought that Senate Republican would go up to 2.2 trillion is outlandish, that wouldn’t happen.

Speaker 7: (10:22)
[crosstalk 00:10:22] McConnell. Is it a problem that last night, the President did not directly rebuke white supremacy? And is it, was his debate performance problematic for independent women who Republicans need in Senate races across the country?

Mitch McConnell: (10:37)
Well, let me just say with the debate, it was not Lincoln-Douglas. And second, with regard to the white supremacy issue, I want to associate myself with the remarks of Senator Tim Scott, that he put out earlier today. I think he said it exactly correctly. And that’s exactly how I would express myself on that issue.

Speaker 7: (10:59)
What are those remarks? Can you explain what Tim Scott said that you endorse?

Mitch McConnell: (11:05)
Yeah. He said it was unacceptable not to condemn white supremacists. And so I do so in the strongest possible way.

Speaker 5: (11:17)
The President had the opportunity though, on the national stage, to make that case, and also to say to the, [inaudible 00:11:22] stand by and stand back. Was that appropriate for him to say that specifically about the [inaudible 00:11:30]?

Speaker 7: (11:36)
Does it hurt Senate Republicans down ballot, those sorts of things in the president’s debate performance last night?

Mitch McConnell: (11:44)
No, I don’t know any of my colleagues who will have problems as a result of that. Anyone else?