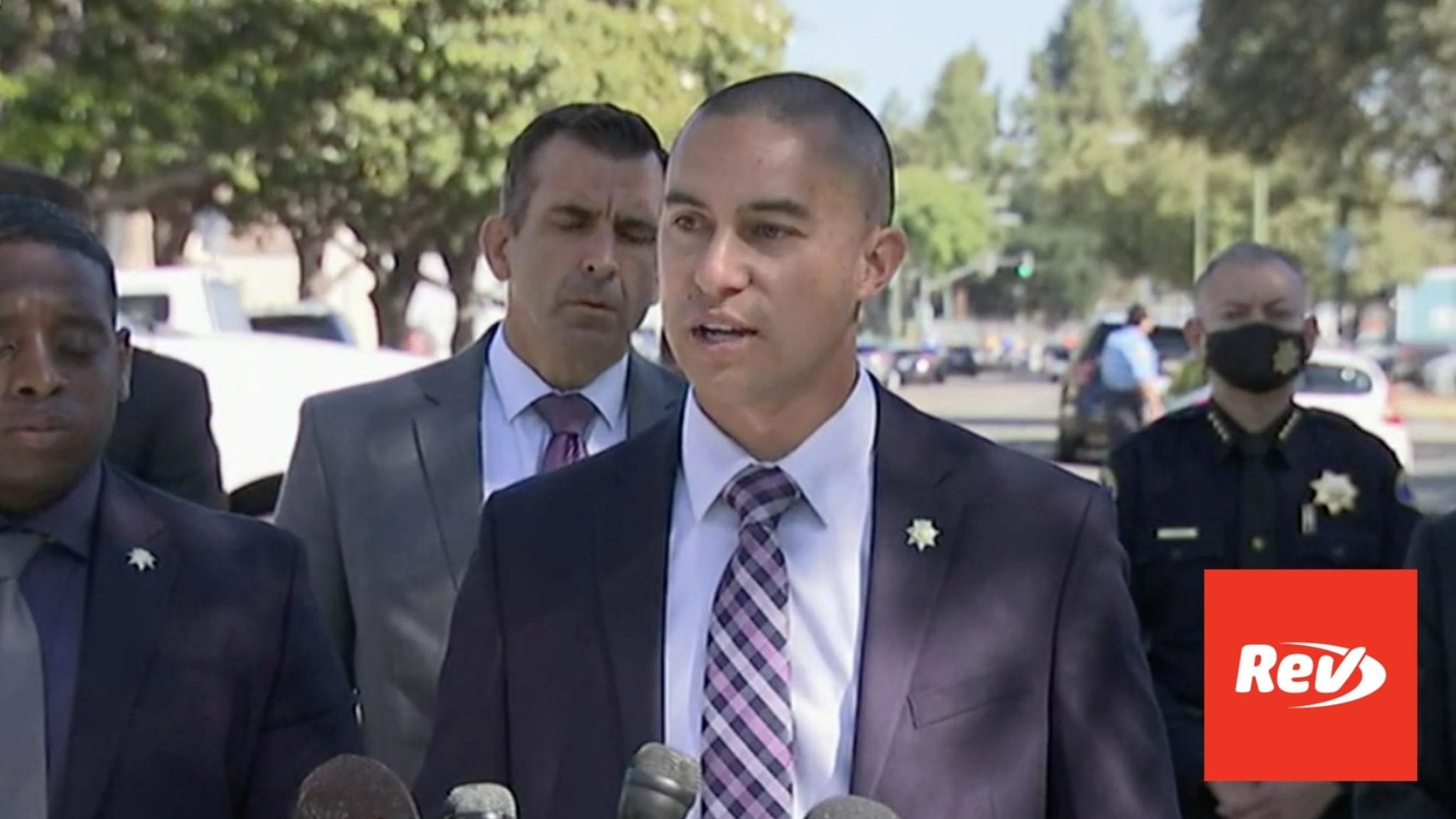 San Jose, California officials held a press conference on May 26, 2021 to address the shooting that took place at a rail yard. They announced that there were multiple fatalities and injuries. Read the transcript of the briefing here.

Russell Davis: (00:00)
This is a tragic and ongoing investigation that we’re dealing with right now. So we asked for the privacy for the family members until we can get everything sorted and figured out from here. Okay.

Russell Davis: (00:09)
This morning at 6:34 AM, Santa Clara County Communications Center received multiple 911 calls of a shots fired call located in the area of 101 West Younger Avenue in the city of San Jose, which is a Valley Transportation Authority hub for VTA.

Russell Davis: (00:30)
Upon receiving multiple phone calls of shots fired, deputies showed up to the scene and learned that there were multiple victims that were shot at the scene and there were multiple injuries and multiple casualties from this incident. I can’t confirm with you at this point on how many injuries there are, or how many casualties, this is still a fluid and ongoing investigation, and we’re still trying to collaborate everything what exactly happened with this incident.

Russell Davis: (00:57)
I will tell you right now, the suspect involved with this incident is deceased. I’m not going to go into details as to what was the cause of death at that point, but he is deceased. And the biggest thing we want to ensure is public safety for our community out there. And right now public safety is assured at this point.

Russell Davis: (01:46)
That’s all the information I have at this point. I will tell you that our reunification center is here next door at 70 West Hedding. It’s going to be over at our Isaac Newton Center, which is downstairs. So if anyone that is looking for a family member or trying to get in contact, it’s going to be over here at 70 West Hedding.

Speaker 2: (02:04)
Russell. Do you know the relationship between the shooter and the VTA and what type of weapon he may have used?

Russell Davis: (02:09)
So I’m not going to go into details. It’s still preliminary at this point. As to the shooter, their information, at this point any type of information in regards with anyone that is deceased is going to go through the Santa Clara County Coroner’s Office. Okay, because they have to do their investigation and find out the next of kin and contacting from that case. In regards to what the weapon involved, I don’t have that information at this point.

Speaker 3: (02:29)
Did any deputies or police officers open fire on the suspect?

Russell Davis: (02:34)
I don’t have that information right now if deputies or police officers open fired from the scene.

Russell Davis: (02:41)
So I don’t know if it was indoors or outdoors. I will tell you it was a male subject and that’s all I have the information at this point.

Speaker 5: (02:47)
Was there a connection between the male suspect and VTA at all?

Russell Davis: (02:51)
I don’t have that information at this point. This is all preliminary. I will tell you, I would say in about an hour from now, 10:30, we will have an update with that information. Right now, I’m going to route it over to Mayor Sam Liccardo, San Jose Mayor, and he’ll speak on behalf and then we’ll go from there.

Speaker 6: (03:05)
Before you go, do you have phone number that family members could call should they not be in the area for the reunification center?

Speaker 7: (03:31)
At any point, was there a rescue operation of sorts where authorities had to go in and get people out of the building?

Russell Davis: (03:38)
Yes, there was a rescue operation. So, pretty much we formed multiple tactical teams that came into the building to extricate victims out as well as fire departments came in, multiple agencies came in and initiated what we call as a rescue task force. That is part of our active shooter protocol, where they come in and they assist and come into pretty much what we call as a warm zone, to assist to extricate victims out. The biggest thing is public safety. We want to get them over and get medical aid as fast as we can.

Speaker 3: (04:25)
Was there a gun battle between arriving officers and the shooter?

Russell Davis: (04:29)
I don’t have that information right now. It’s still preliminary in that case.

Russell Davis: (04:32)
So I don’t have that hard number at this point. I will give you an update once we have that information. Again, this is still preliminary. We asked for the privacy for the families and the victims at this case. Okay. So what I’m going to do is I’m going to route it over to Mr. Glenn Hendricks. He is the VTA President. Okay.

Glenn Hendricks: (04:54)
My name is Glenn Hendrick. I’m the chairperson of the VTA Board of Directors. G-L-E-N-N-H-E-N-D-R-I-C-K-S. So, a horrible tragedy has happened today, and our thoughts and love goes out to the VTA family, the organization, and what they’ve had to go through. I could not be more proud of the VTA organization. As I drove here, I saw VTA buses out on the road. As I said, this is just a horrible tragedy that has occurred. One piece of information, the event did happen on the VTA light rail yard, but it did not happen in the operations control center. It did happen on the yard.

Glenn Hendricks: (05:43)
I want to go ahead and let people know that as of noon today, VTA light rail service will be suspended and additional bus bridges will be put in place so that we can continue to provide service to our county residents. And I also just want to remind people that the reunification center is here at 70 West Hedding for where people can get together and get information about their loved ones. Thank you very much.

Glenn Hendricks: (06:19)
That we’re so sorry this event happened. We are there for you. VTA is in the process of getting grief counselors in place to help them. As I said, VTA is a family, people in the organization know everyone. This is a terrible tragedy and we will do everything we can to help people get through this. [crosstalk 00:06:48] I have no information about the investigation or what happened.

Speaker 5: (06:51)
What about the facility. Can you just kind of describe the facility and how many employees regularly work there, that sort of thing. What’s to be expected at 6:30 happening there?

Glenn Hendricks: (07:01)
I don’t have the number of people that are normally there, but it’s early in the morning when light rail service is starting. This is a maintenance yard where we do maintenance on the vehicles, and also it’s where the vehicles are dispatched.

Sam Liccardo: (07:18)
My name is Sam Liccardo and the Mayor of the City of San Jose. And I also serve on the VTA Board with Chairman Hendricks. This is a horrific day for our city, and it’s a tragic day for the VTA family. Our heart pains for the families and the coworkers, because we know that so many are feeling deeply, this loss of their loved ones and their friends. Now is a moment for us to collect ourselves, to understand what happened to mourn and to help those who have suffered to heal.

Sam Liccardo: (08:08)
That will be my attention today and for the foreseeable future. My attention will then be immediately turned to ensuring we do everything possible to ensure this never happens again in our city. In the next 48 hours, I will be back in communication with you to talk about what we’ve been working on over the last year and a half, and what we intend to do in the weeks to come to ensure we never see a horrific tragedy like this again in San Jose.

Sam Liccardo: (08:46)
We are in a very dark moment, but I am heartened to see the response of the VTA family coming together to help their coworkers. We’re going to do everything we can to support the families of those who have lost their loved ones. And I’m grateful for the immediate response of law enforcement led by the Sheriff’s Office who were able to secure the scene and ensure there would be no more loss of life. Thank you.

Speaker 14: (10:28)
Listening in to the latest briefing from authorities here in San Jose at the scene of an active shooter situation that has resulted in a multiple victims, multiple people injured, multiple people killed. We were hoping to get a finer number on those reports, but we were not able to get one as the spokesperson for the Santa Clara County Sheriff’s Department would not say how many people were directly involved. How many people killed, how many people injured.

Speaker 14: (10:51)
Also, Mike, not too much more information when it comes to the attacker this morning. We do know confirmation that it was a male who opened fire today. The authorities making a point that the shooting happened, we heard from the board president of the VTA, it was not in an operations control center. But again, it is at that VTA light rail facility. We hear these phrases again and again from each person who spoke, “horrible tragedy,” according to Glenn Hendricks, the Board President of VTA. Mayor Sam Liccardo of San Jose called it, “A horrific day for our city.” A lot of sadness and a couple more answers.