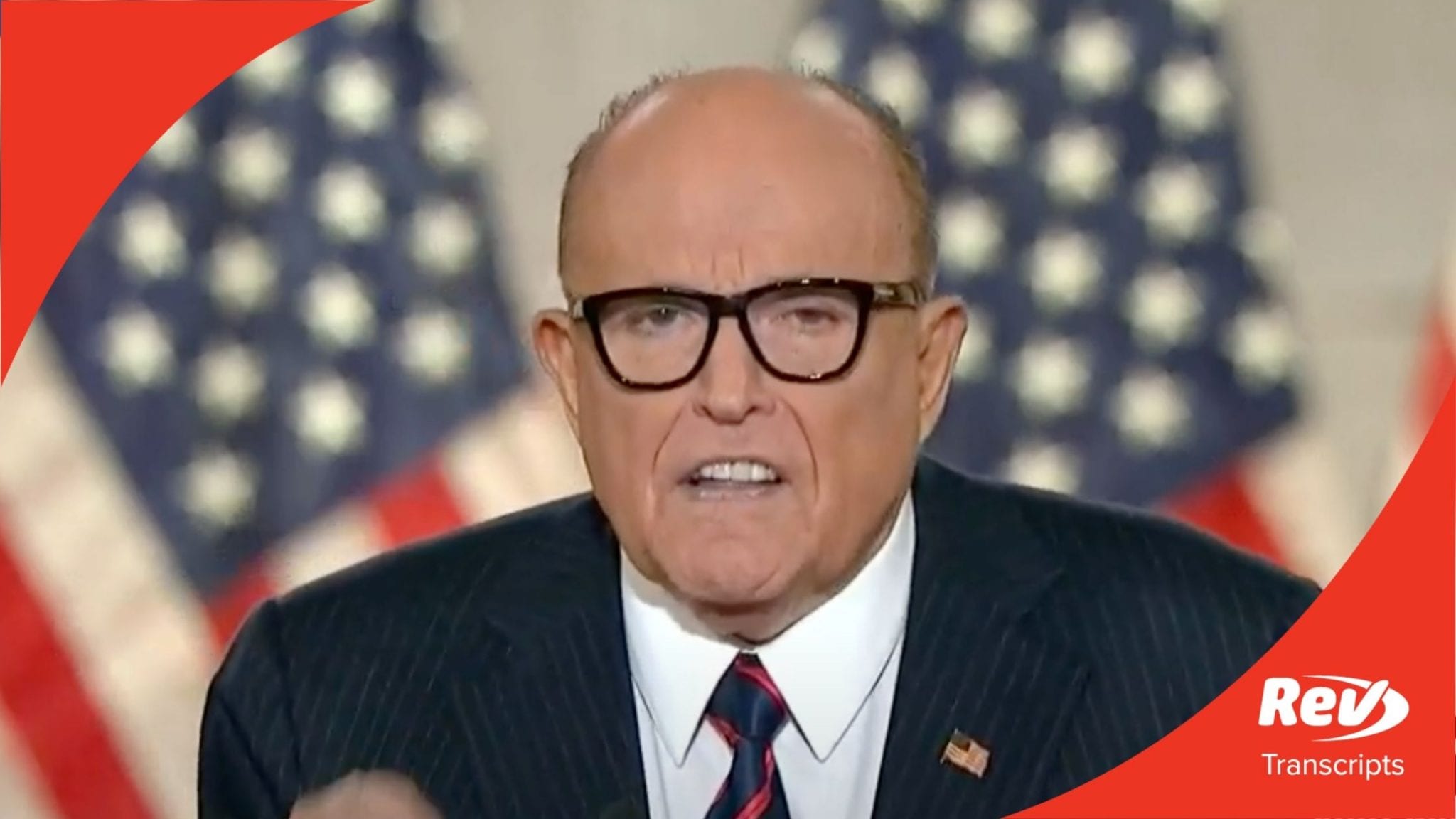 Rudy Giuliani: (00:25)
Now today, my city is in shock. Murders, shootings, and violent crime are increasing at percentages unheard of in the past. We’re seeing the return of rioting and looting. During riots, this Democrat mayor, like others, has often prevented the police from making arrest. And even when arrests are made, liberal, progressive DA’s released the rioters so as not to disrupt the rioting.

Rudy Giuliani: (00:59)
New Yorkers wonder, how did we get overwhelmed by crime so quickly and to decline so fast? Don’t let Democrats do to America what they have done to New York. Again, the Democrats are urging you to vote for an obviously defective candidate. Biden has changed his principles so often he no longer has any principles. He’s a Trojan horse with Bernie, AOC, Pelosi, Black Lives Matter, and his party’s entire left wing just waiting to execute their pro-criminal, anti-police socialist policies.

Rudy Giuliani: (01:41)
The whole unprecedented wave of lawlessness began with a truly just cause, the unforgivable police killing of George Floyd in Minneapolis. Peaceful protests began all over the land. The condemnation of the killing was universal, from President Trump to Democrat leaders. It seemed, for a few brief shining moments, Democrat and Republican leaders would come together with a unified proposal to reduce police misconduct.

Rudy Giuliani: (02:16)
This possibility was very dangerous to the left. They had a president to beat and a country to destroy, and although an agreement on action against police brutality would be very valuable for the country, it would also make President Trump appeared to be an effective leader. They could have none of that. So Black Lives Matter and Antifa sprang into action, and in a flash, they hijacked the peaceful protests into vicious, brutal riots.

Rudy Giuliani: (02:46)
Soon protests turned into riots in many other American cities, almost all Democrat. Businesses were burned and crushed, people beaten, shot and killed. Police officers routinely assaulted, badly beaten, and occasionally murdered, and the police handcuffed by progressive Democrat mayors from doing anything but observe the crimes and absorb the blows. But the worst of it was the slaughter of innocent young people with their whole lives ahead of them.

Rudy Giuliani: (03:19)
The murder of four-year-old LeGend Taliferro in Kansas city shocked the nation, but not Black Lives Matter, or there are many Democrats supporters. 17-year-old basketball star Brandon Hendricks was killed in the Bronx just days after graduating high school and on his way to St. John’s to play basketball. He passed with only a brief mention. One-year-old Davell Gardner Jr. was shot and killed in a stroller at a cookout in Brooklyn, and it caused no outrage.

Rudy Giuliani: (03:57)
For President Trump and for us Republicans, all Black Lives Matter, and the lives of LeGend and Brandon and Davell matter to us, All Lives Matter to us. These continuous riots and democratic cities gives you a good view of the future under Biden. All five of the top cities for homicides, like the top cities for rioting and looting, are governed by progressive Democrats using the progressive Democrat approach to crime, which is to do nothing substantive to reduce it. To release prisoners, as many and as soon as possible, and to go to war with the police, the only group with the capability to protect your citizens.

Rudy Giuliani: (04:48)
It is clear that a vote for Biden and the Democrats creates the risk that you will bring this lawlessness to your city, to your town, to your suburb. There is no question that this awesome job of restoring safety for our people cannot be done from your basement, Joe. There’s also no question that President Trump will fight with all his strengths to preserve the American system of government and our way of life.

Rudy Giuliani: (05:24)
In critical times in our history, America has always been blessed with the right person to handle the crisis. Washington, Lincoln, Roosevelt, Reagan were perfect for the challenges they faced and brought our nation through gloriously. President Trump, with his boundless love of our country and all our people, his disciplined work ethic, his exceptional ability to inspire and his deep understanding of our system of government and the strength of American values is the man we can trust to preserve and even improve our way of life. Mr. President, make our nation safe again.