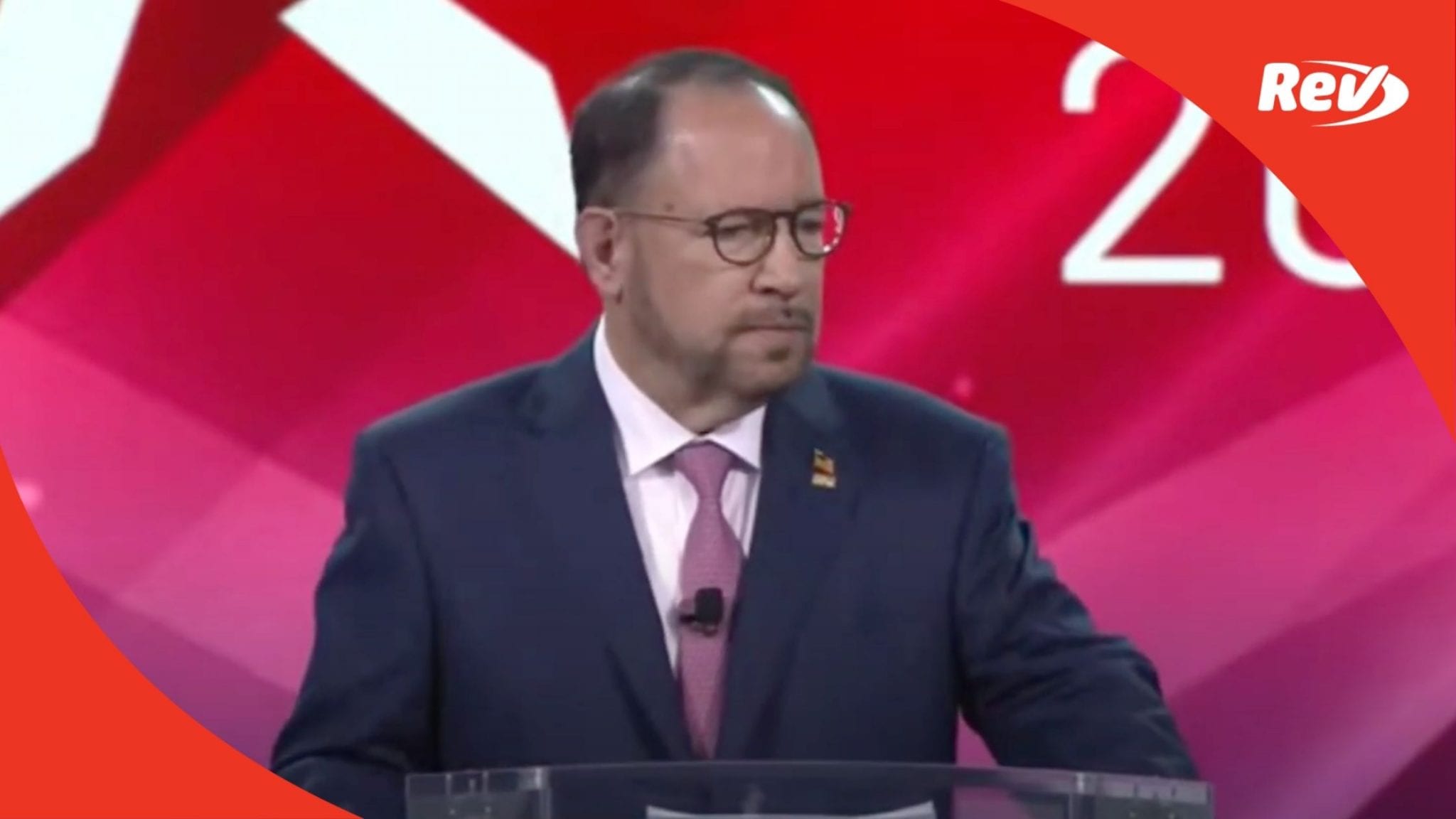 Robert Unanue, owner of Goya Foods spoke at CPAC 2021. He said Donald Trump is “still the actual president of the United States.” Read the transcript of his speech here.

Dan Schneider: (00:13)
This is the first time in years that my mother has not been here. I’m usually it’ll say, Hey mom, but she’s not here. I hope she’s watching live because she can, because Fox Nation is covering CPAC from beginning to end. We are so pleased that Fox nation has been a sponsor for CPAC this year. I’m sure you’ve been to their booth out here. Have y’all seen the booth? And all the interviews, they brought great talent. They’re really doing impressive coverage of CPAC. And we really appreciate it. It was 11:00 on the very first day of CPAC, and somebody in my staff showed me that the market value of our coverage at that point, that was only a few hours into CPAC, was $2 billion worth of marketing coverage. It was fantastic. And when we’ve got great partners like Fox Nation, that really helps, because the world watches. And right now we know that the major media outlets, the so-called mainstream media, and the platforms are really trying to suppress this. So when we’ve got partners and friends like Fox Nation, that really means a lot.

Dan Schneider: (01:01)
That’s how the world gets to know what we really believe. I’m not sure if you’ve seen the different tweets that are going out, claiming all sorts of horrible stuff about us, about what this stage looks like, just evil things being said. So really, Fox Nation, thank you so much for everything you’re doing for us. And for everybody here, they’re also going to have a one year free subscription. Has anybody signed up for that yet? Yes. Most of you have, good. If you haven’t signed up for it, please do. Also, make sure to download the CPAC app, because that’s where you get push notifications. You find out the changes in the agenda, and learn other important things. And you can vote in the straw poll. How many people have not yet voted in the straw poll? I went confessions here, vote. Your vote matters. And this year is a big year because we’ve got a presidential straw poll, with lots of choices. And I promise you, this is going to get major coverage tonight and all day tomorrow. How the CPAC straw poll is faring with regards to the 2024 presidential candidates.

Dan Schneider: (01:51)
I’m sure you all have a favorite, maybe two or three favorites, but you have to download the CPAC app, or you can go to the AC booth right up here and vote in person if you’d like. One other thing before I introduce a very special guest, Liberty HealthShare is another really good friend of ours. How many of you remember who said, “If you want to keep your doctor, you’ll be able to keep your doctor. If you like your health insurance plan, you’ll be able to keep your health insurance plan.” Who said that? Okay. And who at the signing ceremony, and I won’t say the complete sentence, who at the signing ceremony said, “This is a big blanking deal.” So now we’ve got Obamacare 2.0, getting teed up.

Dan Schneider: (02:28)
And if Nancy Pelosi and Chuck Schumer decide that they’re going to get that pushed through the Congress, it’s going to be really hard to stop, but there’s one thing you can all do to avoid what might be coming down the road. A health sharing ministry system gets you around all that. It’s an exception or exclusion. So you really need to learn more about the Liberty Healthcare model, where you can get quality health coverage, where you can actually choose your doctor. Where can actually choose your kind of plan, and you save tons of money because as a health sharing ministry, people are healthier, and they encourage a healthy lifestyle. So truly, Liberty HealthShare, they’ve been good friends of ours for years. Match Lab actually signed up for Liberty Healthcare coverage on the stage at CPAC a few years ago, loves it.

Dan Schneider: (03:05)
So please really consider that. Now we’ve got a special guest that I’m going to announce in the next few seconds. He’s a hero. We all care about elections. We all care about our country. We all pay a price when the cancel culture tries to shut us down. This individual put his money where his mouth is, put his reputation on the line. And when he stood up for President Trump, and when he stood up for the policies of the Trump administration, he was attacked even more aggressively than anybody else in the last four years. And he stood his ground. He’s got an amazing story as a true hero, an American Patriot. It’s my pleasure to welcome an owner at Goya Foods, Bob Unanue.

Bob Unanue: (03:55)
Wow. Oh my goodness. Oh my goodness. God bless you all. We are blessed. That’s what I said that got me in trouble. We are blessed. Such a thrill to be here. This is my first CPAC, and I have to confess that before I got here, I was a little bit downtrodden with what’s happened. But being here with so many incredible Patriots and faith-filled people, it’s so uplifting and encouraging, it’s fantastic. And I want to thank Dan and Mercy and Matt for inviting me here. And they’re good friends for some time now. And it’s just an honor to be here. But my biggest honor today is going to be that I think we’re going to be on the same stage as, in my opinion, the real, the legitimate and the still actual president of the United States, Donald J Trump. Sorry, Twitter. I’ve already been canceled. You can’t do it again. No way. Obviously, I think as many people I know and maybe many of you, unsolicited ballots. So I mean, as a citizen of United States, I think I’m allowed to vote once, once. Not twice or three times or 10 times.

Bob Unanue: (05:10)
But we still have faith that the majority of the people of the United States voted for the president, someone in my family got harvested to vote, to go from Texas to Georgia to vote. So not only the presidential election, the Georgia election where it was not legitimate. But we also welcome, because I think a great majority of the people in the United States voted for President Trump, and even a few Democrats, but the far left, in communism, the few control the many, and that’s what’s happening in this country, because there are good people on both sides, and people that make mistakes. We got allow them to come back to our side. Like the people work on the Keystone pipeline that voted for Joe Biden. I said, “What happened?” They said, “Well, you get what you pay for.” But welcome back. Welcome back to our side.

Bob Unanue: (05:50)
I’m going to do something different today. I figured, I don’t know, but you will have to sign a swear in as jury. I’m going to conduct a little kangaroo court here called the cancel court. Because I don’t have that much time, I’m just going to review a little bit of what happened to me as I was at the Rose Garden on July 9th, 2020. So we’ll begin the court here, the cancel court, the CPAC cancel court. Hear ye hear ye, hear ye, order in the court, order in the cancel court. Come now the plaintiffs Julian and Joaquin Castro, the Castro brothers, not of Cuba, of the United States. AOC and the far left cancel culture. The plaintiffs. Come now the defendants.

Bob Unanue: (06:26)
President Donald J. Trump, Ivanka Trump, the entire Trump family, Bob Unanue, myself, Goya Foods, and the CPAC attendees, and the people of the United States of America. The plaintiffs allege and state that on July 9th, 2020, Bob Unanue, Goya Foods did state in the Rose Garden of the White House that our country and our president was blessed. That we were blessed to have the president Donald J. Trump. High crimes and misdemeanor. A president who wanted the country to stay open, and keep working, as Goya did. A president who had already revitalized our economy, a president who was bringing jobs and prosperity back to America, and a president who defended life and liberty. The following are the charges brought against the defendants, invoking God’s blessings on our country and its president, number one. Number two, Goya Foods and its people staying open and working courageously as an essential business. Charge number two. Charge number three, the Goya family of employees offering the gift of millions of pounds of food to our nation and that is what I was doing at The White House. Ended up giving four million pounds this year.

Bob Unanue: (07:27)
Charge four, President Trump and Ivanka Trump supporting and being appreciative of Goya Foods for the gift of food and nourishment to America and globally during a worldwide pandemic. And by the way, it’s not okay to support, but you can boycott, that’s okay. The plaintiffs seek to boycott, close, and destroy Goya Foods and it’s 4,000 plus direct employees, as well as tens of thousands of indirect jobs and companies. Seek to close down and shutter the US economy, seek to close all churches, seek to close all schools, seek to weaponize a worldwide pandemic in an election year, seek to destroy the Trump family and all who support life, liberty, and prosperity as well as the right to worship, work, love and build. Seek to kill our spirit. Seek to destroy our reason to get up in the morning, God, family, work. Seek to cancel God. The defendants allege, that’s all of us, and pray, we must unite under God. We must love and build, not hate and destroy. We must come together as a diverse nation of all ethnicities in love and respect.

Bob Unanue: (08:37)
We must hear and respect all opinions, even those we disagree with. We have the right to disagree, but we cannot hate and demonize each other. The pledge of allegiance that we’re hearing everyday today of the United States of America says that we are one nation under God, indivisible, but we cannot be a nation that is indivisible, unless we are under God. If we seek to cancel God, then we will never be one nation. Still the greatest nation on the face of the earth. America, CPAC, you, the jury must decide whether we love, build and unite, or hate, destroy, and divide. It’s your decision. God bless you all, God bless America. Thank you.