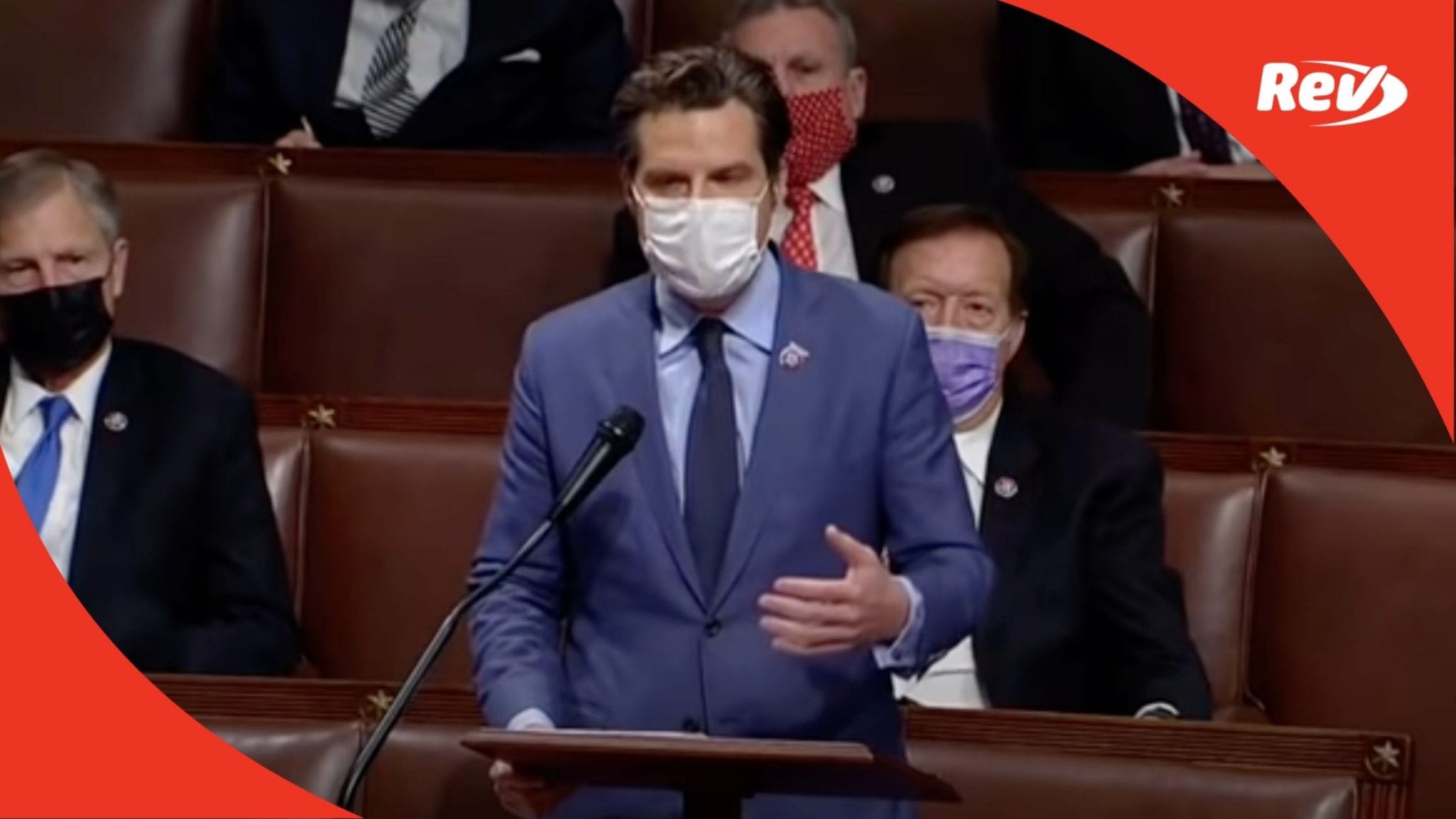 Representative Matt Gaetz spoke on the House floor January 6 after Donald Trump supporters and protestors broke into the Capitol building. Gaetz objected to the counting of electors, citing fraud, and claimed that some of the Trump supporters who breached the Capitol were actually members of Antifa. Read the full transcript here.

Matt Gaetz: (00:05)
Madam Speaker, one of the first things we did when the House convened today was to join together to extend our grace and our kindness and our concern for a colleague who has experienced just an insurmountable amount of grief with his family, and I want all of our fellow Americans watching to know that we did that because we care about each other and we don’t want bad things to happen to each other, and our heart hurts when they due. Now, I’m sure there are plenty of folks over there who don’t like me too much, and there are few of you that I don’t care for too much, but if anybody had been hurt today, it would have been even more of a catastrophe than we already saw and I think that’s an important point for the country.

Matt Gaetz: (00:48)
Another important point for the country is that this morning, President Trump explicitly called for demonstrations and protests to be peaceful. He was far more… You can moan and groan but he was far more explicit about his calls for peace than some of the BLM and left-wing rioters were this summer when we saw violence sweep across this nation. Now, we came here today to debate, to follow regular order, to offer an objection, to follow a process that is expressly contemplated in our constitution. And for doing that we got called a bunch of seditious traitors.

Matt Gaetz: (01:30)
Now, not since 1985 has a Republican president been sworn in absent some Democrat effort to object to the electors but when we do it it is the new violation of all norms and when those things are said, people get angry. Now, I know there are many countries where political violence may be necessary but America is not one such country.

Matt Gaetz: (01:51)
Madam Speaker, it was wrong when people vandalized and defaced to your home, it was wrong when thugs went to Senator Holly’s home, and I don’t know if the reports are true, but the Washington Times has just reported some pretty compelling evidence from a facial recognition company showing that some of the people who breached the Capitol today were not Trump supporters, they were masquerading as Trump supporters, and in fact we’re members of the violet terrorist group, Antifa. Now, we should seek to build America up not tear her down and destroy her. And I am sure glad that at least for one day I didn’t hear my Democratic colleagues calling to defund the police.

Matt Gaetz: (02:34)
Now, I appreciate all the talk. Now, I appreciate all the talk of coming together but let us not pretend that our colleagues on the left have been free of some anti-democratic impulses just because we signed on to legal briefs and asked courts to resolve disputes. There were some in the left who said that we should not even be seated in the body, that we ought to be prosecuted, maybe even jailed. Those arguments anger people, but people do understand the concepts of basic fairness and no competition, contest, or election can be deemed fair if the participants are subject to different rules.

Matt Gaetz: (03:27)
Baseball teams that cheat and steal signs should be stripped of their championships. Russian Olympians who cheat and use steroids should be stripped of their medals and states that do not run clean elections should be stripped of their electors. This fraud was systemic, it was repeated. It was the same system and I dare say it was effective. We saw circumstances where when Democrat operatives couldn’t get the outcomes they wanted in state legislators, when they couldn’t get the job done there, they went and pressured, and litigated, and usurped the constitution with extra constitutional action of some officials in some states. They fraudulently laundered ballots, votes, voter registration forms, and then they limited review.

Matt Gaetz: (04:18)
In 2016, Democrats found out that they couldn’t beat Donald Trump at the ballot box with voters who actually show up, so they turned to impeachment and the witness box. And when that failed they ran to the mailbox where this election saw an unprecedented amount of votes that could not be authenticated with true ID, with true signature match, and with true confidence for the American people.