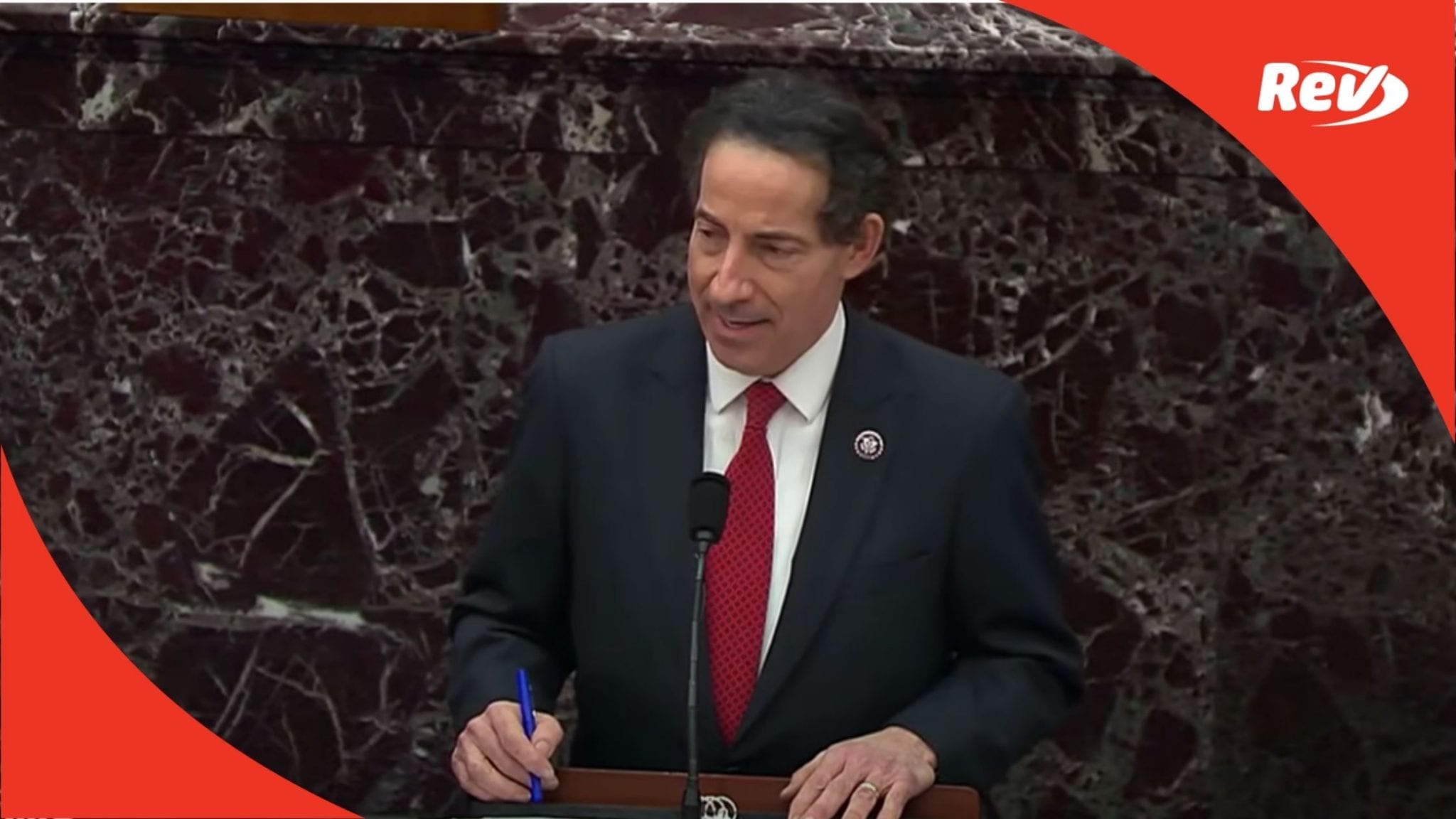 Jamie Raskin: (00:07)
Senators, Mr. President, to close I want to say something personal about the stakes of this decision, whether President Trump can stand trial and be held to account for inciting insurrection against us. This trial is personal indeed for every Senator, for every member of the House, every manager, all of our staff, the Capitol Police, the Washington DC, Metropolitan Police, the National Guard, maintenance and custodial crews, the print journalists and TV people who were here, and all of our families and friends. And I hope this trial reminds America how personal democracy is and how personal is the loss of democracy too.

Jamie Raskin: (00:56)
Distinguished members of the Senate, my youngest daughter, Tabitha, was there with me on Wednesday, January 6th. It was the day after we buried her brother, our son, Tommy. The saddest day of our lives. Also, there was my son-in-law, Hank, who’s married to our oldest daughter, Hannah. I consider him a son too, even though he eloped with my daughter and didn’t tell us what they were going to do. But it was in the middle of COVID-19. But the reason they came with me that Wednesday, January 6th, was because they wanted to be together with me in the middle of a devastating week for our family. And I told them I had to go back to work because we were counting electoral votes that day on January 6th. It was our constitutional duty. And I invited them instead to come with me to witness this historic event, the peaceful transfer of power in America.

Jamie Raskin: (02:09)
They said they heard that President Trump was calling on his followers to come to Washington to protest. And they asked me directly, “Would it be safe? Would it be safe?” And I told them, Of course it should be safe. This is the Capitol” Steny Hoyer, our majority leader had kindly offered me the use of his office on the House floor because I was one of the managers that day and we were going through our grief. So Tabitha and Hank were with me in Steny’s office, as colleagues dropped by to console us about the loss of our middle child, Tommy, our beloved Tommy. Mr. Neguse and Mr. Cicilline actually came to see me that day. Dozens of members, lots of Republicans, lots Democrats came to see me and I felt a sense of being lifted up from the agony. I won’t forget their tenderness.

Jamie Raskin: (03:15)
And through the tears, I was working on a speech for the floor when we would all be together in joint session. And I wanted to focus on unity when we met in the House. I quoted Abraham Lincoln’s famous 1838 Lyceum speech, where he said that, “If division and destruction ever come to America, it won’t come from abroad. It will come from within,” said Lincoln. And in that same speech, Lincoln passionately deplored mob violence. This was right after the murder of Elijah Lovejoy, the abolitionist newspaper editor. Lincoln deplored mob violence and he deplored mob rule. And he said it would lead to tyranny and despotism in America.

Jamie Raskin: (04:14)
That was the speech I gave that day after the House, very graciously and warmly welcomed me back. Tabitha and Hank came with me to the floor and they watched it from the gallery. When it was over, they went back to that office, Steny’s office off of the House floor. They didn’t know that the House had been breached yet and that an insurrection or riot or a coup had come to Congress. By the time we learned about it, about what was going on, it was too late. I couldn’t get out there to be with them in that office. All around me, people were calling their wives and their husbands, their loved ones to say goodbye. Members of Congress, in the House anyway, were removing their congressional pins so they wouldn’t be identified by the mob as they tried to escape the violence. Our new chaplain got up and said a prayer for us. And we were told to put our gas masks on.

Jamie Raskin: (05:26)
And then there was a sound I will never forget. The sound of pounding on the door like a battering ram. It’s the most haunting sound I ever heard and I will never forget it. My chief of staff Julie Tagen was with Tabitha and Hank locked and barricaded in that office. The kids hiding under the desk, placing what they thought were their final texts and whispered phone calls to say their goodbyes. They thought they were going to die. My son-in-law had never even been to the Capitol before. When they were finally rescued, over an hour later by Capitol officers and we were together, I hugged them and I apologized. And I told my daughter, Tabitha, who’s 24 and a brilliant algebra teacher in Teach for America. Now, I told her how sorry I was. And I promised her that it would not be like this again, the next time she came back to the Capitol with me. And you know what she said? She said, “Dad, I don’t want to come back to the Capitol.”

Jamie Raskin: (06:51)
Of all the terrible, brutal things I saw and I heard on that day, and since then, that one hit me the hardest. That and watching someone use an American flag pole, the flag still on it, to spear and pummel one of our police officers ruthlessly, mercilessly, tortured by a pole with a flag on it that he was defending with his very life. People died that day. Officers ended up with head damage and brain damage. People’s eyes were gouged. Officer had a heart attack. Officer lost three fingers that day. Two officers have taken their own lives.

Jamie Raskin: (07:52)
Senators, this cannot be our future. This cannot be the future of America. We cannot have presidents inciting and mobilizing mob violence against our government and our institutions because they refuse to accept the will of the people under the constitution of the United States. Much less can we create a new January exception in our precious beloved constitution that prior generations have died for and fought for so that corrupt presidents have several weeks to get away with whatever it is they want to do. History does not support a January exception in any way. So why would we invent one for the future?