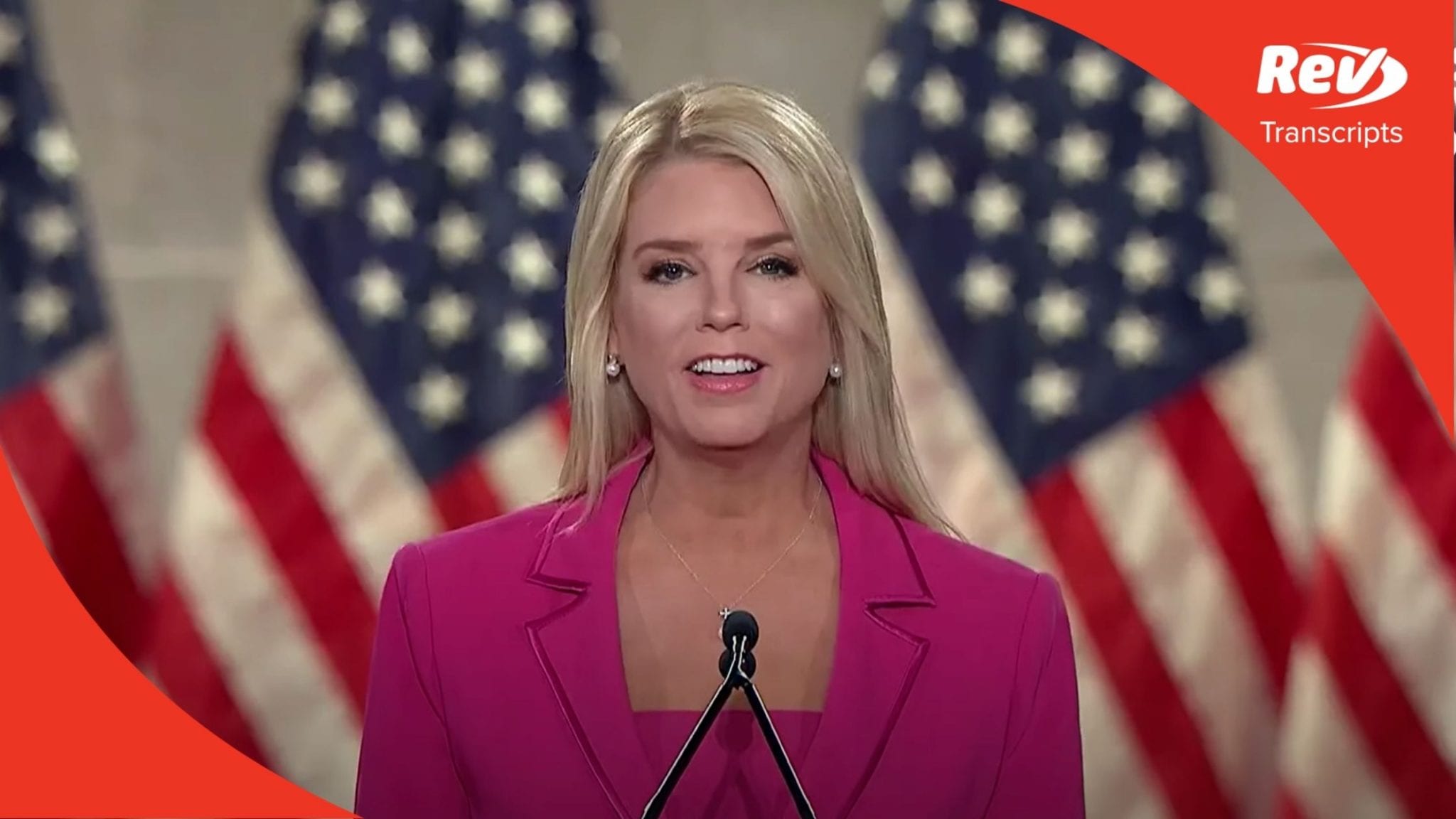 Pam Bondi: (00:00)
I’m Pam Bondi. Our party’s theme tonight is America, the land of opportunity, and listening to the stories of discoveries and deliverance, you can’t help but be proud to call this country home. But for Joe Biden, it’s been the land of opportunism, not opportunity. As a career prosecutor and former attorney general of Florida, I fought corruption, and I know what it looks like, whether it’s done by people wearing pinstripe suits or orange jumpsuits. At the Democrats’ convention, we were told to look at Joe Biden as the model of integrity, but when you look at his 47-year career in politics, the people who benefited are his family members, not the American people.

Pam Bondi: (00:48)
Let’s take a closer look. We all know about Joe’s son, Hunter Biden. A corrupt Ukrainian oligarch put Hunter on the board of his gas company, even though he had no experience in Ukraine or in the energy sector. None, yet he was paid millions to do nothing. He only had one qualification that mattered: he was the son of the man in charge of distributing U.S. aid to Ukraine. And recently reported information revealed that a few months after Hunter Biden joined that corrupt company’s board, the Obama-Biden State Department began doing business with them, even when it remained under investigation for corruption. And it gets worse; that very same company was being investigated by a Ukrainian prosecutor. Joe Biden, the vice president of the United States, threatened to withhold aid to Ukraine unless that same prosecutor was fired, and then he was fired. Hunter only resigned from that board just before his dad announced his campaign for president.

Pam Bondi: (02:03)
Now, let’s talk about China. Fact: Joe Biden flew to China on Air Force Two with Hunter along for the ride. They said he was just there as a family member, but we know that’s untrue. In Beijing, Hunter didn’t just go sightseeing. He had meetings with his Chinese bank partners. Hunter even arranged for his dad to meet with one of the partners. 10 days later, those Chinese communist bankers approved millions to go to Hunter’s firm, and those bankers work for the Chinese Communist Party, which oppresses their people, cheated American workers for decades and covered up a deadly virus. To this day, Hunter controls a 10% stake in that firm. And Joe Biden’s done more than look the other way on China. He said, “The Chinese aren’t our competition. Come on, man. They’re not bad folks.” Come on, Joe. Talk to the folks in middle America who lost countless jobs to China, while your son was getting rich with them.

Pam Bondi: (03:12)
But there’s more. Fact: there have been numerous press reports that have shown other close Biden family members benefited from Joe’s 47 year political career. Joe Biden was point person on Iraq. The president of a construction firm met with Biden’s team in the White House, and then who did they hire to build thousands of houses in Iraq? Joe Biden’s close family member. Who, you guessed it, had no experience in the industry and no experience in Iraq. A company official bragged that it helps to have a family member of the vice president as partner. The family member put it more bluntly by saying there’s a line of 747s filled with cash ready to invest.

Pam Bondi: (04:03)
Now let’s follow the money down South. Again, as reported in the press yet another close family member of Joe’s set his sights on Costa Rica and Jamaica, where millions of dollars flowed from the Obama-Biden Administration in taxpayer backed loans to projects linked to, yes, that same family member. These aren’t isolated incidents. It is a deliberate pattern of conduct, and that’s just what he did as vice-president. Imagine what he’d do as president. How many American families would be allowed to get away with this? Why should there be one standard for the elite political class and another set of rules for the rest of us?

Pam Bondi: (04:51)
When millions of Americans voted for Donald Trump, they knew he’d be different, and he is. He’s a tough, no nonsense outsider who can’t be bought or intimidated. He won’t even take a paycheck from the American people. He donates his paycheck to charities across this country. Democrats have been lecturing America about integrity for four years while their nominee has been writing the textbook on abuse of power for 40 years. If they want to make this election a choice between who’s saving America and who’s swindling America, bring it on. Joe says he’ll build back better. Yeah, build the Bidens back better. Our president is in this to build a safer, better and stronger America, and he will finish what he started to keep this a real land of opportunity for everyone. If you want to check your voting status, secure your ballot or register to vote, text “VOTE” to 88022. Remember, the best is yet to come.