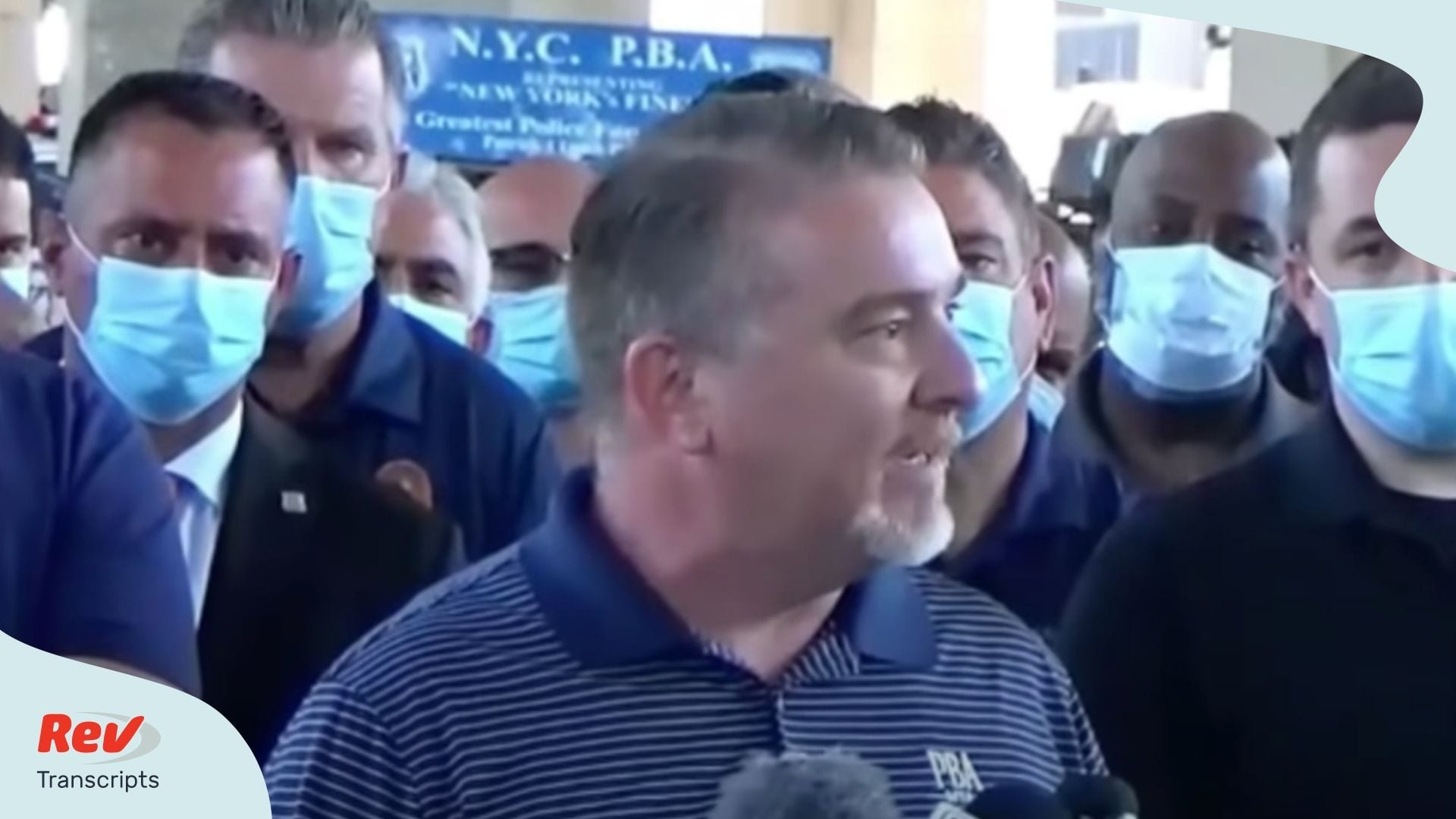 President of the NYPD New York Police Union Mike O’Meara gave a fiery speech on the portrayal of cops over the George Floyd killing. He said the Floyd killing was “disgusting” but that lawmakers and the media need to stop treating the police like “animals and thugs”, and for vilifying the profession. Read the speech transcript here.

Mike O’Meara: (00:03)
Good afternoon. My name is Mike O’Meara. I’m the President of the New York State Association of PBAs, and I just want to talk to you, the press, and I want to talk to the police officers. 375 million interactions with the public every year, 375 million interactions, overwhelmingly positive responses, overwhelmingly positive responses, but I read in the papers all week. We all read in the papers that in the black community mothers are worried about their children getting home from school without being killed by a cop. What world are we living in? That doesn’t happen. It does not happen. I am not Derek Chauvin. They are not him. He killed someone. We didn’t. We all restrained, and you know what? I’m saying this to all the cops, here, because you know what?

Mike O’Meara: (01:08)
Everybody’s trying to shame us, the legislators, the press. Everybody’s trying to shame us into being embarrassed about our profession. Well, you know what? This isn’t stained by someone in Minneapolis. It’s still got a shine on it, and so, do this, so do this. Stop treating us like animals, and thugs, and start treating us with some respect. That’s what we’re here today to say. We’ve been left out of the conversation, we’ve been vilified. It’s disgusting. It’s disgusting. Trying to make us embarrassed of our profession. 375 million interactions. Overwhelmingly, overwhelmingly positive. Nobody talks about all the police officers that were killed in the last week in the United States of America, and there were a number of them.

Mike O’Meara: (02:13)
We don’t condone Minneapolis, we roundly reject what he did as disgusting. It’s disgusting. It’s not what we do. It’s not what police officers do. All legislators abandoned us. The press is vilifying us. Well, you know what, guys? I’m proud to be a cop, and I’m going to continue to be proud to be a cop until the day I retire, and that’s all I have to say.

Pat Lynch: (02:43)
Our professions are under assault, where the signs on the street are dictating the legislation that happens, but it’s worse than that. We here in the city are doing this in the backdrop of a night where we had seven shootings in four minutes, eight shootings in five hours in different parts of Brooklyn, not connected. Last week, 40 shootings, the highest since 2015. Homicides went from five to 13. Burglaries have quadrupled. You may ask why? Why now? How is this happening? How is this happening when we have so many professional caring law enforcement officers out there on the street? The answer is simple. There’s been a message, not only from us City Hall, but from the state house that says there will be a soft touch, and the criminals know it.

Pat Lynch: (04:06)
While folks were protesting, they were breaking down doors, climbing in windows, pulling out their weapons they’re not afraid to carry. Their hatred towards law enforcement is misguided. I have 36 years as a New York city police officer, and I can tell you this unequivocally, not one woman or man that has a shield on their chest, a patch on their shoulder, regardless of what arm of law enforcement they come from will support or defend a murder of an innocent person, and that’s what happened. Let us be unequivocal. In all my time, I’ve never seen a time when not one law enforcement would support. Eight minutes is wrong. There was no struggle, there was no reason.

Pat Lynch: (05:08)
I know I speak on behalf of every police officer here, it was wrong. We denounced it, and we have from the beginning. We’ve had in this city violence on our streets hiding amongst protesters. Folks that believe, that go out on the streets, and bring their signs. We don’t criticize them. We police them. We’re protesters. I’ve protested, we’ve protested. We believe in it, and we believe their rights, but now we’re being guided by those that were intent on violence from outside our communities, that threw the stone, that broke the window, that caused the violence, that injured 300 police offices, some viciously, that’s who we denounce.

Pat Lynch: (06:02)
And then, for our legislators, and I emphasize our legislators to then demonize police offices as if we’re the problem, as if we broke the window, as if we caused the violence. That is absolutely outrageous. We as police officers are citizens of this city, these counties, and our state. Our families live with us too. What we’re seeing now in a rush to pass packages of bills in the dark of night without even reading them. Ask our legislators, have you read the bill? We’ve heard it before. They’ll say they’re busy. They’ll say they don’t have time. The bill is hundreds of pages. Well, it’s your job to read it, and know what it says. The reason I say that is why aren’t you speaking to all the stakeholders? That’s their word, the stakeholders, the stakeholders, our families, the community, the stakeholders.

Pat Lynch: (07:23)
Why aren’t you asking the question of professional law enforcement? Why aren’t you seeking our advice? Is it that maybe we’d be reasonable? Maybe we can see where the problems would be? Maybe because we’re standing on that street corner with our fellow citizens? We know that they don’t want this violence visiting their corners, but we’ve seen it. Didn’t we just visit this problem with our legislature recently? Didn’t they rush through bail reform? Didn’t they have to admit they made a mistake? Why did it happen? It happened because they rushed it in the dark of night without speaking to the stakeholders, the stakeholders. They talk about transparency, me too. We want to be transparent.

Pat Lynch: (08:21)
You can only have transparency if you’re being honest, having the discussion, having the dialogue. Defund the police department, ask different folks. What’s the definition? Get rid of the police. Defund the police, shift the money around. It’s a slogan. It’s a slogan during a protest. I admire it, because it’s open to so many definitions. We went out on the streets to do a job. We went out in the street during this violence. We went out in the street, because we knew we had to. City Hall asked us and ordered us to, and the press put us out there, but then when we found out there was no plan, there wasn’t enough of us. We were not planning on stopping the violence. The violence visited us.

Pat Lynch: (09:26)
We have district attorneys from all our counties, from many of our state saying we will not prosecute criminals who looted, not protested, who looted, who rioted. Our DA’s won’t prosecute them, but you know what’s on the hearts and minds of everybody that has a shield in their hip pocket today? That who did DA did prosecute, was a police officer whose boss sent him out there to do a job, was put in a bad situation during a chaotic time, and you know what? My gray hair told me it was going to happen. Everybody walked away from them. There was no longer a boss standing next to him like it was that night. The brass threw them under a bus, not saying it’s our fault. We didn’t have a plan. We asked them to go out there.

Pat Lynch: (11:34)
They’re following the crowd. What’s the joke? I’m the leader. Where’s my people? Let me catch up with them. They’re legislating by signs in a protest. We have our leadership who think they’ll appease the criminals, who think they’ll appease the rioters, they think they’ll appease our critics. You know what my job as a New York city police officer is when I put that shield on my chest, I put that patch on my shoulder? My job at that protest is to stand on my own two feet. My job and your job is to make sure we protect your right to say what you believe as loud as you want, wherever you want, and we’ll stand that line. We’ll stand that line, and protect that right, but when I’m standing that barrier line, what I don’t have is a personal opinion.

Pat Lynch: (12:44)
My job is to protect yours, so when we see our leaders tactically putting themselves on the grounds, when we see our leaders joining the other side of the barrier, whether we personally agree or not, you’re derelict in your duty, you stand the line. Sometimes you’re happy, sometimes you’re angry, but it makes no difference, because we stand the line. We stand the line on our feet, with our shoulders back, with our shield out saying, I’m here to make sure you’re good. Now, if I want to go across that line, if I’m the brass in this job that wants to jump over the line, and go on the ground, then throwing a 28, take your time, go home, change, and come back, and do it on your own time.

Pat Lynch: (13:37)
Don’t do it on the time of the citizens, don’t do it on my time, don’t do it on the facts of our members, and then, when it goes wrong, and a DA says, “We’re going to lock you up.” You should be standing next to them saying, “I’m the leader. I sent them out. I should take their head. I should get locked up.” But, don’t hold your breath. We’re not going to see that because they’ve walked away.