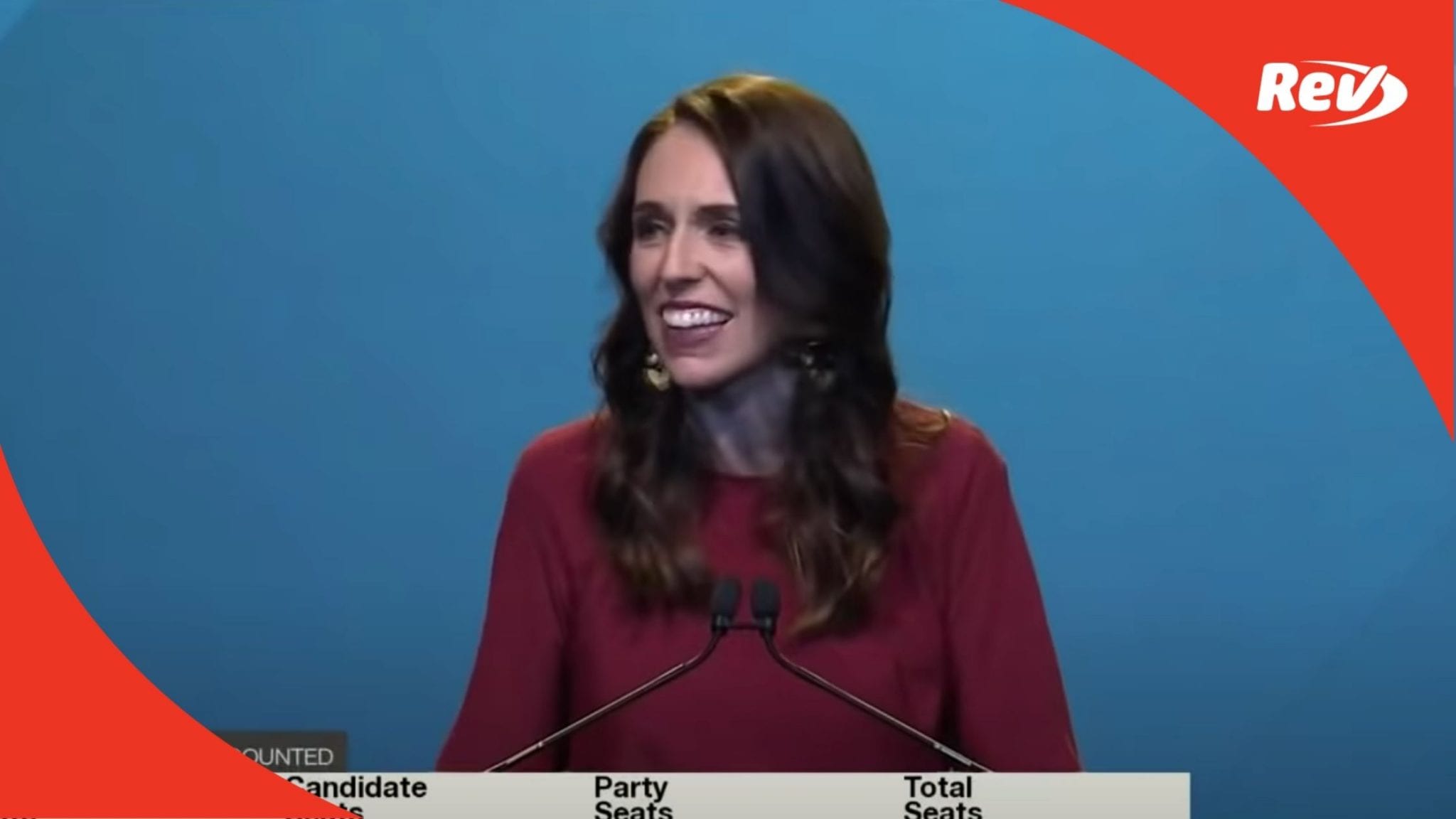 Jacinda Ardern: (00:28)
Tonight, New Zealand has shown the Labour Party its greatest support in at least 50 years. WE have seen that support in both urban areas and in rural areas and seats we may have hoped for, but in those equally we may not have expected. And for that, I only have two simple words. Thank you. Thank you to the people who worked so hard to share our message, who volunteered for us in what felt like an endless campaign. Thank you to the candidates and members of Parliament who worked not just for six weeks, but for three years to earn their community’s support.

Jacinda Ardern: (01:38)
But most importantly, thank you to the many people who gave us their vote, who trusted us to continue with leading New Zealand’s recovery, who backed to the plan we are already rolling out. And to those amongst you who may not have supported Labour before and the results tell me there were a few of you. To you I say thank you. We will not take your support for granted. And I can promise you, we will be a party that governs for every New Zealander.

Jacinda Ardern: (02:30)
The governing for every New Zealander has never been so important more than it has been now. We are living in an increasingly polarized world, a place where more and more people have lost the ability to see one another’s point of view. I hope that this election, New Zealand has shown that this is not who we are. That as a nation, we can listen and we can debate. After all, we are small too lose sight of other people’s perspective. Elections aren’t always great at bringing people together, but they also don’t need to tear one another apart.

Jacinda Ardern: (03:15)
And in times of crisis, I believe New Zealand has shown that. And so again, I say, thank you. This has not been an ordinary election and it’s not an ordinary time. It’s been full of uncertainty and anxiety. And we set out to be an antidote to that. As a nation, we needed a plan for recovery. And so that is what we created. We needed an ongoing health response to the global pandemic to keep people safe. So that is what we’ve done. And we needed a team focused absolutely and entirely on New Zealand and Labour absolutely is.

Jacinda Ardern: (04:11)
Tonight’s result has been strong and it is clear that Labour will lead the government for the next three years. And over the next three years, there is much work to do. We will build back better from the COVID crisis. Better, stronger, with an answer to the many challenges New Zealand already faced. This is our opportunity to build an economy that works for everyone, to keep creating decent jobs, to up-skill and train our people, to protect our environment and address our climate challenges, to take on poverty and inequality, to turn all of the uncertainty and hard times into cause for hope and optimism. It’s an opportunity we have already grabbed and a plan we have laid out to invest in the infrastructure. It sits us up for generations to come while creating thousands of jobs. New state homes to house the homeless. 100% renewable electricity generation. Free trades training and interest free loans for small businesses to expand and to thrive. Our plan is already in action and already working. But after this result, we have the mandate to accelerate our response and our recovery and tomorrow we start.

Jacinda Ardern: (06:08)
We know the next few years will not be easy. The last few have not been easy either, but there have been chinks of light that have shown through even the darkest of times. That light has been our nation’s determination, our support for one another, our sense of resolve. And that light has always been more powerful than the most overwhelming darkness. Yes, policies, ideas, and having a plan matters, but it will only be as good as the people that it works to support. And I cannot imagine a people I would feel more privileged to work on behalf of, to work alongside and to be Prime Minister for.

Jacinda Ardern: (07:07)
We will govern as we campaigned, positively with optimism about our future, with a relentless focus on a recovery that brings New Zealanders with us to deliver long lasting change. Now more than ever is the time to keep going, to keep working, to grab hold of the opportunities that lay in front of us. So let’s step forward together. [foreign language 00:07:33] Let’s keep moving.