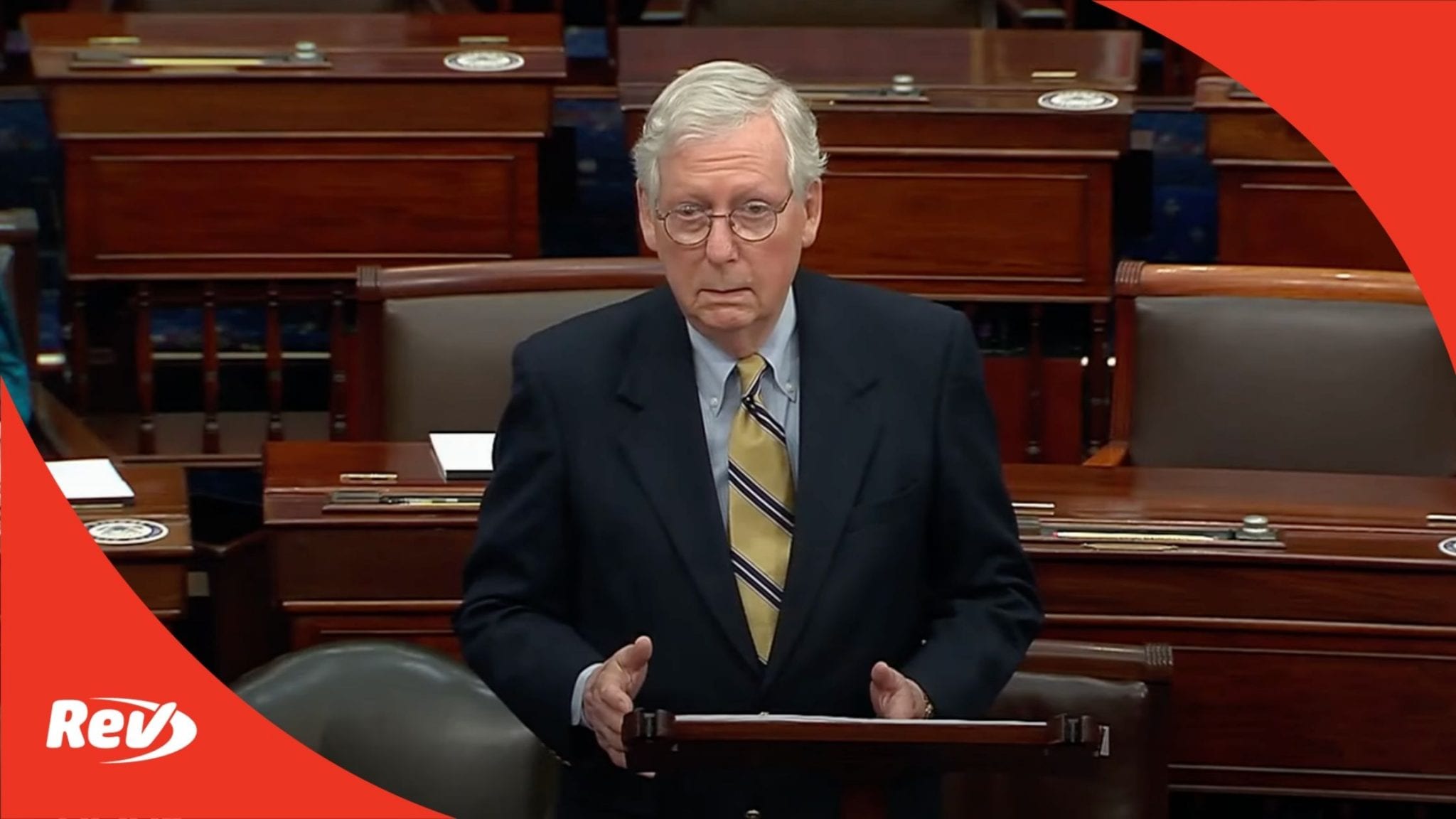 Senate minority leader Mitch McConnell gave a speech on the Senate floor after his vote to acquit Donald Trump in his second impeachment trial. Read the full speech transcript from February 13, 2021.

Mitch McConnell: (00:04)
January 6th was a disgrace. American citizens attacked their own government. They use terrorism to try to stop a specific piece of domestic business they did not like. Fellow Americans beat and bloodied our own police. They stormed the center floor. They tried to hunt down the Speaker of the House. They built a gallows and chatted about murdering the vice president. They did this because they’d been fed wild, falsehoods by the most powerful man on earth because he was angry. He lost an election. Former President Trump’s actions preceded the riot or a disgraceful dereliction of duty. The House accused the former president of quote “Incitement”. That is a specific term from the criminal law. Let me just put that aside for a moment and reiterate something I said weeks ago. There’s no question, none, that President Trump is practically and morally responsible for provoking the events of the day. No question about it.

Mitch McConnell: (01:46)
The people who stormed this building believed they were acting on the wishes and instructions of their president and having that belief was a foreseeable consequence of the growing crescendo of false statements, conspiracy theories, and reckless hyperbole, which the defeated president kept shouting into the largest megaphone on planet Earth. The issue is not only the president in temperate language on January 6th. It is not just his endorsement of remarks in which an associate urged quote “Trial by combat”. It was also the entire manufactured atmosphere of looming catastrophe. The increasingly wild myths about a reverse landslide election that was somehow being stolen. Some secret coup by our now president.

Mitch McConnell: (03:09)
Now I defended the president’s right to bring any complaints to our legal system. The legal system spoke, the electoral college spoke. As I stood up and said, clearly at that time, the election was settled. It was over, but that just really opened a new chapter of even wilder and more unfounded claims. The leader of the free world cannot spend weeks thundering that shadowy forces are stealing our country and then feign surprise when people believe him and do reckless things. I sadly many politicians sometimes make overheated comments or use metaphors. We saw that. That unhinged listeners might take literally, but that was different. That’s different from what we saw. This was an intensifying crescendo of conspiracy theories orchestrated by an outgoing president who seemed determined to either overturn the voter’s decision or else torch our institutions on the way out. The unconscionable behavior did not end when the violence actually began.

Mitch McConnell: (04:47)
Whatever our ex president claims he thought might happen a day, whatever right reaction he’s says he meant to produce by that afternoon we know he was watching the same live television as the rest of us. A mob was assaulting the Capitol in his name, these criminals who are carrying his banners, hanging his flags and screaming their loyalty to him. It was obvious that only President Trump could end this. He was the only one who could. Former aides publicly begged him to do so. Loyal allies frantically called the administration. The president did not act swiftly. He did not do his job. He didn’t take steps so federal law could be faithfully executed and order restored. No, instead, according to public reports, he watched television happily as the chaos unfolded. He kept pressing his scheme to overturn the election. Now, even after it was clear to any reasonable observer that Vice President Pence was in serious danger. Even as the mob carrying Trump banners was beating cops and breaching perimeters their president sent a further tweet, attacking his own vice president.

Mitch McConnell: (07:07)
Now predictably and foreseeably under the circumstances, members of the mob seemed to interpret this as a further inspiration to lawlessness and violence not surprisingly. Later, even when the president did halfheartedly began calling for peace he didn’t call right away for the riot to end. He did not tell the mob to depart until even later. And even then with police officers bleeding and broken glass covering Capitol floors, he kept repeating election laws and praising the criminals. In recent weeks, our ex-president’s associates have tried to use the 74 million Americans who voted to reelect him as a kind of human shield against criticism. Using the 74 million who voted for him as kind of a human seal shield against criticism. Anyone who decries his awful behavior is accused of insulting millions of voters. That’s an absurd deflection. 74 million Americans did not invade the Capitol, hundreds of rioters did. 74 million Americans did not engineer the campaign of disinformation and rage that provoked it. One person did, just one.

Mitch McConnell: (09:13)
I’ve made my view of this episode very plain, but our system of government gave the Senate a specific task. The Constitution gives us a particular role. This body is not invited to act as the nation’s overarching moral tribunal. We’re not free to work backward from whether the accused party might personally deserve some kind of punishment. Justice Joseph Story, our nations first great constitutional scholar, as he explained nearly 200 years ago, the process of impeachment and conviction is a narrow tool. A narrow tool for a narrow purpose. Story explained this limited tool exists to quote, “Secure the state against gross official misdemeanors”, end quote. That is to protect the country from government officers. If President Trump were still in office, I would have carefully considered whether the House managers proved their specific charge. By the strict criminal standard the president’s speech probably was not incitement.

Mitch McConnell: (10:58)
However, in the context of impeachment, the Senate might have decided this was acceptable shorthand for the reckless actions that preceded the riot. But in this case, the question is moot because former President Trump is constitutionally not eligible for conviction. Now this is a close question. No doubt. Donald Trump was the president when the House voted. Though, not when the House chose to deliver the paper. Brilliant scholars argue both sides of this jurisdictional question. The text is legitimately ambiguous. I respect my colleagues who’ve reached either conclusion. But after intense reflection, I believe the best constitutional reading shows that article two, section four, exhausts the set of persons who can legitimately be impeached, tried, or convicted. It’s the president, it’s the vice-president and civil officers. We have no power to convict and disqualify a former office holder who is now a private citizen.

Mitch McConnell: (12:42)
Here is article two, section four, quote, “The president, the vice-president and all civil officers of the United States shall be removed from office on impeachment for and conviction of treason, bribery, or other high crimes and misdemeanors,” end quote. Now, everyone basically agrees that the second half of that sentence exhausts the legitimate grounds for conviction. The debates around the Constitution’s framing make that abundantly clear. Congress cannot convict for reasons besides those. It therefore follows that the list of persons in that same sentence is also exhausted. There’s no reason why one list would be exhaustive, but the other would not. Article two, section four must limit both why impeachment and conviction can occur and to whom if this revision does not limit impeachment and conviction powers then it has no limits at all. The House has sole power of impeachment and the Senate’s sole power to try all impeachments, would create an unlimited circular logic empowering Congress to ban any private citizen from federal office.

Mitch McConnell: (14:25)
Now, that’s an incredible claim, but it’s the argument of the House managers seem to be making. One manager said the House and Senate have quote, “Absolute unqualified, jurisdictional power”, end quote. Well, that was very honest because there is no limiting principle in the constitutional text that would empower the Senate to convict former officers that would not also let them convict and disqualify any private citizen, an absurd end result to which no one subscribes. Article two section four must have force. It tells us the president, the vice president, and civil officers may be impeached and convicted. Donald Trump’s no longer the president. Likewise, the provision states that officers subject to impeachment and conviction shall be removed from office if convicted. Shall be removed from office, if convicted. As Justice Story explained, the Senate upon conviction is bound, in all cases, to enter a judgment of removal from office. Removal is mandatory upon conviction.

Mitch McConnell: (18:04)
Didn’t get away with anything, yet. Yet. We have a criminal justice system in this country. We have civil litigation and former presidents are not immune from being accountable by either one. I believe the Senate was right not to grab power the Constitution doesn’t give us. And the Senate was right not to entertain some light speed sham process to try to outrun the loss of jurisdiction. It took both sides more than a week just to produce their pre-trial briefs. Speaker Pelosi’s own scheduling decisions conceded what President Biden publicly confirmed, a Senate verdict before inauguration day was never possible. Now, Mr. President this has been a dispiriting time, but the Senate had done our duty. The framers’ firewall helped held up again. Oh, in January the sixth, we returned to our posts and certified the election. We were uncowed. We were not intimidated. We finished the job. And since then we resisted the climber to defy our own constitutional guardrails in hot pursuit of a particular outcome.

Mitch McConnell: (19:48)
We refused to continue a cycle of recklessness by straining our own constitutional boundaries in response. The Senate’s decision today does not condone anything that happened on or before that terrible day. It simply shows that senators did what the former president failed to do. We put our constitutional duty first.