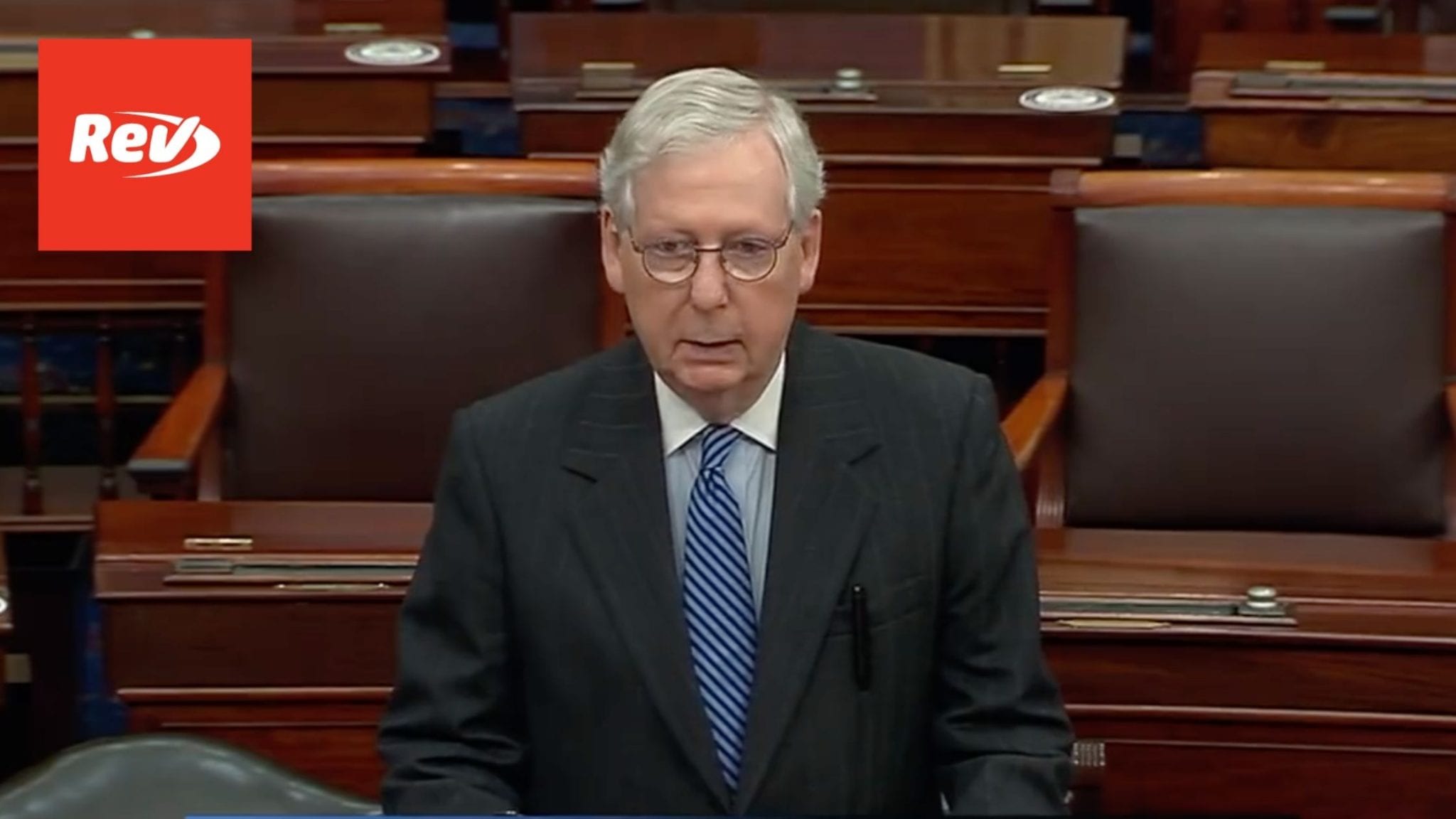 Senate Majority Leader Mitch McConnell congratulated President-elect Joe Biden on December 15, the morning after the electoral college confirmed the election vote. It was the first time he formally acknowledged him as president-elect. Read the transcript of his speech remarks here.

Senator Mitch McConnell: (00:00)
Over the last four years, our country has benefited from a presidential term filled with major accomplishments. President Donald Trump has repeatedly surprised the skeptics, confounded his critics and delivered significant policy victories that have strengthened our country.

Senator Mitch McConnell: (00:21)
Case in point, back in May when the president set the goal of finding a pandemic-ending vaccine by the end of this year, his timeline was literally dismissed by people who assumed they knew better. Here was one quote: “Trump promises coronavirus vaccine by the end of the year,” is scoffed, one headline, but his own experts temper expectations. “Fact-check,” complained another headline. “‘Coronavirus could come this year,’ Trump says. Experts say, ‘Needs a miracle to be right.'”

Senator Mitch McConnell: (01:03)
Well, with the genius of science, support from Congress and the bold leadership of the Trump administration, that medical miracle arrived right on schedule. Americans on the front lines are receiving vaccinations as we speak. This episode offers a kind of microcosm of the last four years on so many subjects, from economic prosperity to foreign policy to protecting American families. The skeptics doubted him. The critics derided him, but President Trump has delivered.

Senator Mitch McConnell: (01:45)
When President Trump ran for office, he promised to help open a new chapter for working families. After eight years of failed policies that concentrated wealth and optimism among the lucky few, prosperity was going to flow to all kinds of workers, in all kinds of communities, he said, and that’s exactly what happened.

Senator Mitch McConnell: (02:09)
Before this pandemic spread from China and the world had to slam on the brakes, the American people had the best job market in living memory. With help from the policies of President Trump and Republicans in Congress, American workers dynamited the stagnation that experts had said was the new normal.

Senator Mitch McConnell: (02:33)
Unemployment hit a 50 year low. Capital markets hit record highs. At this time, all kinds of Americans got to share in the gains. We saw earnings grow faster for workers then for managers, faster for the bottom 25 than for the top 25. This success was fueled in part by the policy leadership of President Trump.

Senator Mitch McConnell: (03:00)
This administration pursued bold regulatory changes. Once-in-a-generation tax reform had alluded prior leaders, this president signed it into law in his first year. And together, we repealed the worst part of Obamacare, the unfair individual mandate was zeroed out.

Senator Mitch McConnell: (03:24)
President Trump also took historic steps to strengthen the future of our trade with the world. He secured the historic United States’ Mexico-Canada Agreement and the bilateral tax treaties with partners in Europe and in Asia.

Senator Mitch McConnell: (03:41)
A nation this productive needs plenty of energy to keep it going. Fortunately, President Trump and his administration ended the ideological war on fossil fuels and hit the accelerator on all-of-the-above American energy dominance. In the last four years, we suppressed Saudi Arabia in oil production. We saw energy exports exceed energy imports for the first year in almost 70 years. Meanwhile, we saw CO2 emissions fall, along with other harmful pollutants. That energy independence dramatically strengthened our hand with respect to the rest of the world, particularly the Middle East.

Senator Mitch McConnell: (04:31)
So speaking of the Middle East, President Trump wasted little time pulling back from the prior administration’s disastrous Iran deal. His team eliminated daylight between us and Israel, and repaired our relationship with Arab partners. And he aligned these relationships around our common shared interests, countering threats like radical Islamic terrorists and Iranian aggression.

Senator Mitch McConnell: (05:01)
Under President Trump’s command, our forces took terrorist leaders like al-Baghdadi and Soleimani off the battlefield. The physical caliphate that ISIS established on the previous presidents watch was destroyed. All of this paved the way for the Abraham Accords, the historic normalization of relationships between Israel and the UAE, Bahrain, Sudan, and most recently, Morocco, and the potential is there for more on the horizon.

Senator Mitch McConnell: (05:38)
Now, the Middle East isn’t the only place where the Trump administration has shored up our footing on the world stage. Our 45th commander-in-chief set out to rebuild and modernize our military and to move our foreign policy from a chapter of weakness on apology into a renewed posture of strength.

Senator Mitch McConnell: (05:59)
Four years later, we have a new national defense strategy to complete with and deter adversaries like Russia and China. We have rebuilt the military and invested in new technologies to ensure America keeps our edge in everything from cyber to space to advanced weapons systems. And the president’s leadership has not stopped with those who are currently serving. He also signed into law the historic VA MISSION Act to ensure our dedication to the men and women in uniform does not end when their tours conclude.

Senator Mitch McConnell: (06:37)
So clearly, Madam President, the list of American accomplishments since 2016 is nearly endless. There are the many miles of new protections on our Southern border. At one point, apprehensions at the border hit their lowest level since the 1970s. The central causes like religious liberty and the most vulnerable, the unborn, have had a champion in this administration, instead of an adversary. There have been historic new steps to conserve our national treasures, like the Great American Outdoors Act.

Senator Mitch McConnell: (07:13)
And perhaps most important of all, President Trump nominated and the Senate confirmed three outstanding Supreme Court justices, along with more than 220 more Article 3 federal judges. These are brilliant, young constitutionalists, men and women in lifetime appointments who will renew the judiciary for a generation, all because President Trump knows we need judges who respect the essential but limited job description the framers wrote for our third branch of government.

Senator Mitch McConnell: (07:49)
As you can see, Madam President, it would take far more than one speech to catalog all the major wins the Trump administration has helped deliver for the American people. The outsider who swore he would shake up Washington and lead our country to new accomplishments, both at home and abroad, proceeded to do exactly that. President Trump and Vice President Mike Pence deserve our thanks and our gratitude for their tireless work and their essential roles in all these victories, and in many more.

Senator Mitch McConnell: (08:28)
Six weeks ago, Americans voted in this year’s general election. The legal and constitutional processes have continued to play out since then. Yesterday, electors met in all 50 states. As of this morning, our country has officially a president-elect and a vice president-elect. Many millions of us had hoped the presidential election would yield a different result, but our system of government has processes to determine who will be sworn in on January the 20th. The electoral college has spoken.