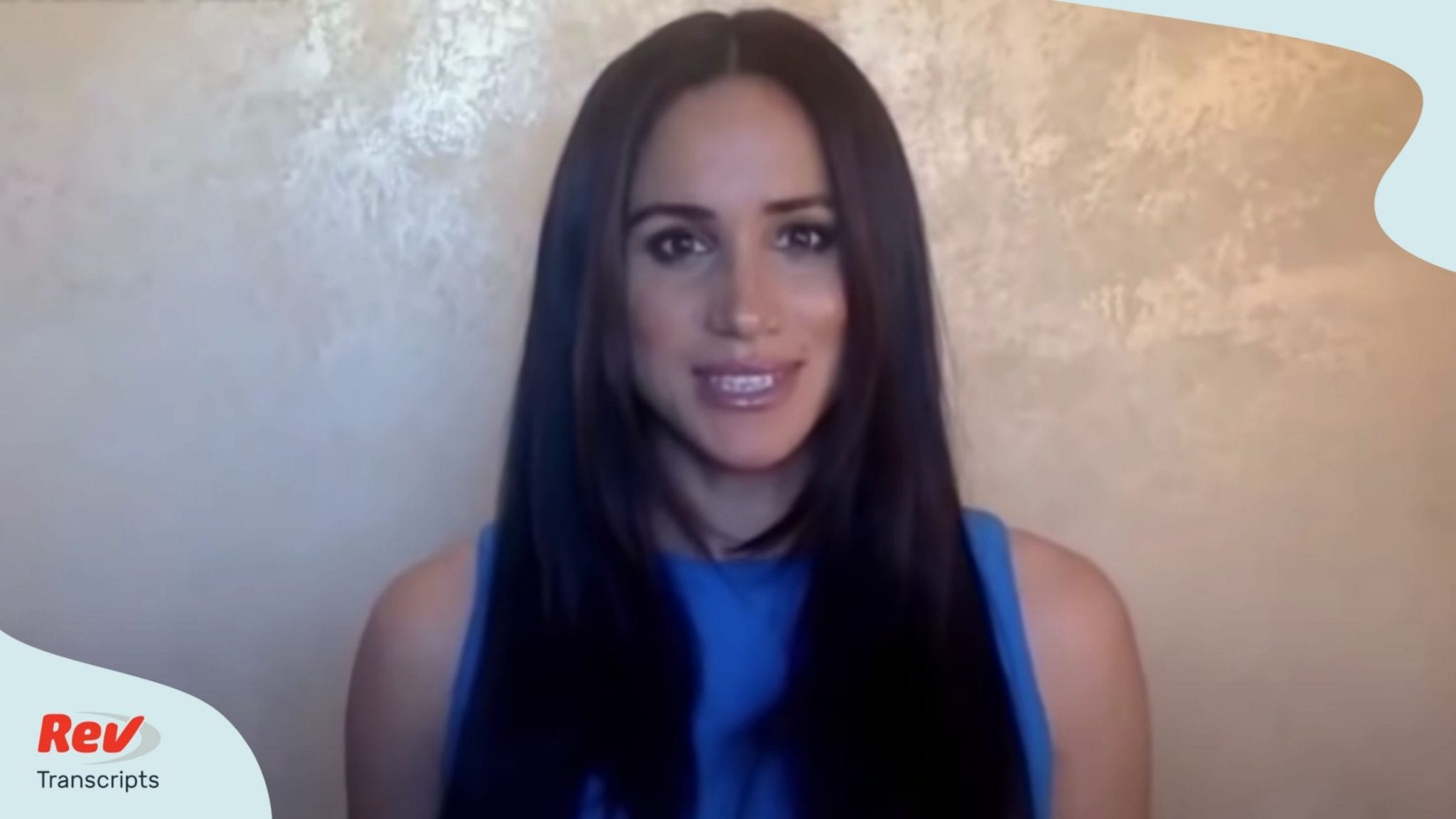 Meghan Markle gave a speech on July 14 for the Girl Up Leadership Summit. She encouraged young women to use their voices to fight for justice and equality. Read the full transcript here.

Meghan Markle: (00:01)
It’s such a joy to speak to you today. To young women around the world who aren’t just poised to change the world, but you’ve already begun changing the world.

Meghan Markle: (00:10)
Last month, I had a chance to speak to the 2020 class at my high school alma mater, which is an all girls school in Los Angeles. And I said that they shouldn’t see their graduation as an ending, but rather as a beginning, the beginning of a journey where they can now harness their work, their values and the skills, all the skills that they’ve learned to rebuild the world around them.

Meghan Markle: (00:33)
Now, many of you have already spent years embodying, and yes, even enacting the change you’d like to see in the world. Yet the opportunity that lies ahead for you is the same one that those graduates and millions of young women around the world have as well.

Meghan Markle: (00:50)
I want to share something with you. If those in the halls and corridors and places of power, from lawmakers to world leaders, to executives, all of those people, they depend on you more than you will ever depend on them. And here’s the thing, they know this. They know that all of you at a younger age than any modern comparison are setting the tone for an equitable humanity, not figuratively, literally.

Meghan Markle: (01:21)
This is a humanity that desperate needs you to push it, to push us, forcefully, in a more inclusive, more just, and more empathetic direction, and to not only frame the debate, but to be in charge of the debate on racial justice, on gender, climate change, mental health and wellbeing, on civic engagement, on public service, on so much more. That’s the work that you are already out there doing.

Meghan Markle: (01:46)
Girl Up members are organizing Black Lives Matter protests around the world. You’re creating films. You’re creating films to encourage your peers to become activist leaders. You are reforming the criminal justice system. You are telling your school boards, “We need more mental health resources for all ages.” You’re leading coalitions to end gun violence. You are standing up and demanding to be heard, yes, but you are also demanding to own the conversation.

Meghan Markle: (02:17)
Another thing about those lawmakers and leaders and executives I mentioned earlier. Now, many of them, better or worse, they don’t listen until they have to, because the status quo is easy to excuse and it’s hard to break, but it will pull tightest right before snapping. Women have always historically gotten a lot of, “What isn’t how it’s done,” or, “Yeah, that’s an idea, but you know what? We’re going to do this instead.”

Meghan Markle: (02:48)
But when do we hear that, as women? We hear that in the moments that we challenge the norms. So, if that’s the case, I say to you, keep challenging, keep pushing, make them a little uncomfortable, because it’s only in that discomfort that we actually create the conditions to reimagine our standards, our policies and our leadership. To move towards real representation and meaningful influence over the structures of decision making and power.

Meghan Markle: (03:18)
Despite what some might say, this re-imagining, it’s not a zero sum game where one side wins and one side loses. Not at all. It is mutually beneficial and better for everyone. Because of that, that path to get us there will take all of us. It will take girls and women. It will take men and boys. It will take those that are black and those that are white collectively tackling the inequities and structural problems that we know exist.

Meghan Markle: (03:49)
I believe we are on the precipice of transformation. We can accelerate the pace of change and you know what? We don’t have to be satisfied with the current speed of progress. What’s more, I think that it’s really important to acknowledge the paradox of how this progress is both aided and impaired by our digital space. Your generation is often referred to as the Digital Natives, and you understand that our online world has the power to affirm and support as much as it does to harm.

Meghan Markle: (04:47)
Because that’s what it is. It’s just noise. But your voices are those of truth and hope, and your voices can and should be much louder. I know that you’ve already done so much and made so many people lives better. The moment we’re living through right now asks all of us to do more. It’s a moment where your voices and your action have never been more urgently needed. And we can take inspiration from women like Prime Minister Jacinda Ardern, who brought New Zealand together to swiftly and boldly tackle COVID-19. Or there’s Maya Moore, the WNBA star who sat out from professional basketball since 2019 to free a man who served 20 years in prison for a crime did not commit.

Meghan Markle: (05:33)
And those are just two examples. As you well know, there are so many others. Believing in true equality is not enough. It will take more than belief. We have to work for it every day. Even when it’s hard, even when it makes others feel uneasy, we have to speak up for ourselves and we have to speak out for others who struggle to be heard.

Meghan Markle: (06:17)
The Dalai Lama famously said compassion is the radicalism of our time. Compassion means seeing the pain and suffering of others and knowing that it’s our duty to try to help relieve it. Continue to believe in yourselves. Believe in what makes you unique. And don’t be afraid to do what you know is right, even when it’s not popular, even when it’s never been done before, even if it scares people, and even if it scares you.

Meghan Markle: (06:50)
Now, under normal circumstances, we would have come together in person for this, and I wish we could. Yet there’s something interesting about each of you being in your own community right now, because our communities are the drawing board for change. They’re where your values and beliefs can be manifested and folded into something tangible.

Meghan Markle: (07:12)
Look, sometimes it’s not obvious what to do. And often, it’s fear that paralyzes us and stops us from being brave and being bold. But don’t underestimate that you have some of those answers within. Don’t underestimate your ability to push through the fear. You have, rooted in your convictions, the ability to craft a rule that you know is just and kind. And your gut will tell you what’s right and what’s wrong. What’s fair and what’s unfair. The hardest part, and it was the hardest part for me, is to chase your convictions with action.

Meghan Markle: (07:52)
You look at the breadth of the issues we’re facing right now, it is easy to get overwhelmed. I understand. So be where you are in the moment. The growth and the change that you’re pursuing might not feel like anything day to day, but when you look back, I promise you will see that it all adds up.

Meghan Markle: (08:14)
We make better communities and a better world for ourselves step by step. And the pace of those steps is getting quicker. It’s in looking at the aggregate, looking at the big picture, that you can see how far we’ve progressed. I am extraordinarily proud of what you’ve already accomplished. Please continue to honor the conviction and compassion that’s awoken within you. I will be cheering you on, so will my husband, so will Archie, as you all continue marching, advocating and leading the way forward.