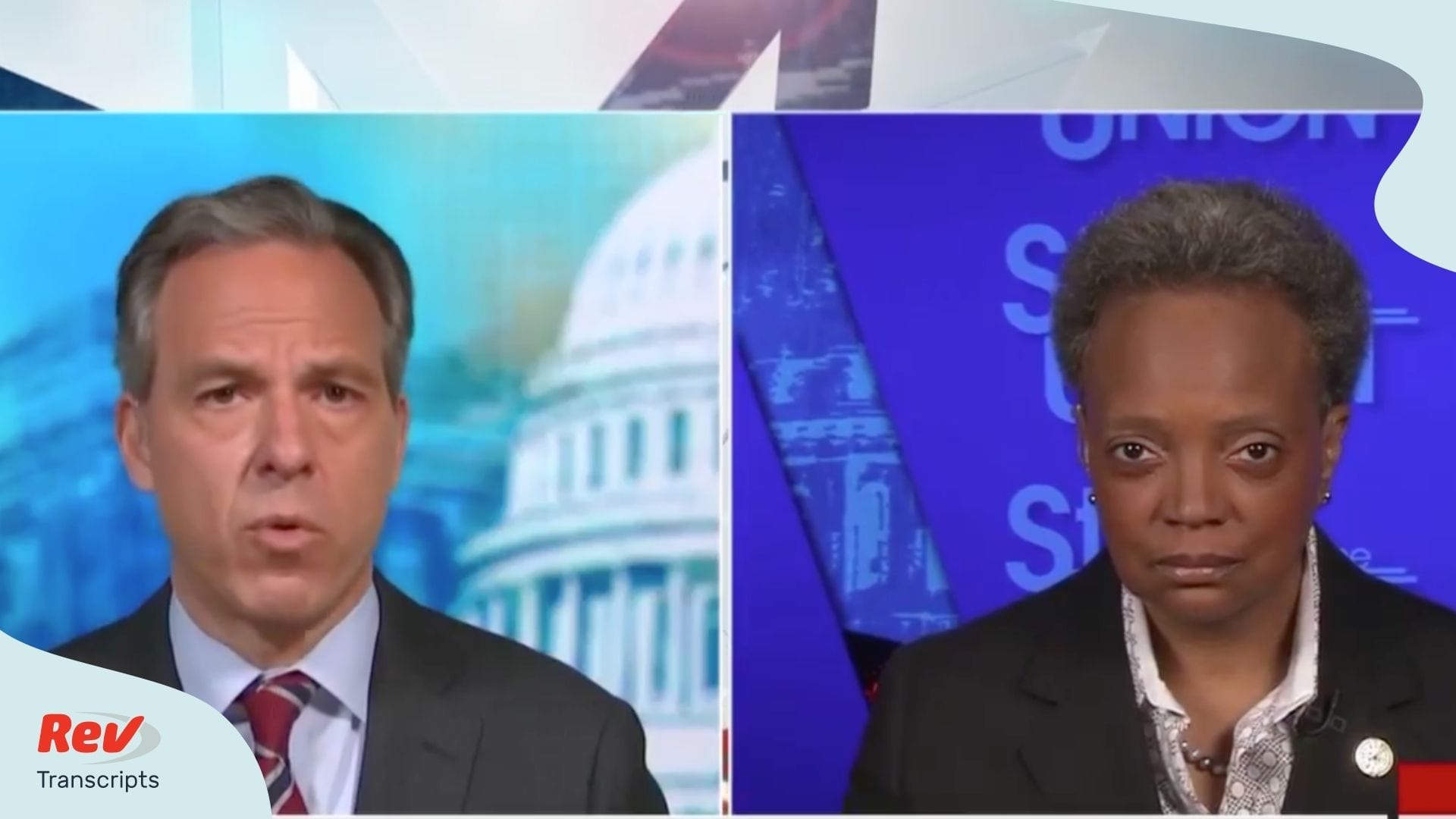 Chicago Mayor Lori Lightfoot did an interview with CNN’s Jake Tapper on federal troops being sent to Chicago. She said, “We can’t just allow anyone to come into Chicago, play police in our streets.” Read the full transcript here.

Lori Lightfoot: (00:21)
Well let me be clear this is not about working with the Trump administration. For decades now in major cities across the country, FBI, DEA, ATF, those agents have been in our districts and do work and work in concert with local law enforcement to help support a number of efforts, not the least of which is violence in our cities, and so the opportunity presented itself under the management of the U.S. attorney here, and I stress that because that’s unlike what we saw in Portland, where the Trump administration parachuted in these additional federal agents without consulting anybody locally and ignoring the local U.S. attorney. Very different circumstance here in Chicago. I’ve drawn a very hard line. We will not allow federal troops in our city. We will not tolerate unnamed agents taking people off the street, violating their rights, and holding them in custody. That’s not happening here in Chicago. So I’ve drawn a very, very bright line. I’ve made that very clear to every federal authority that I’ve spoken with and they understand that if they cross that line, we will not hesitate to use every tool at our disposal to stop troops and unwanted agents in our city. But obviously we have challenges regarding violence.

Jake Tapper: (01:45)
Yeah. Well I was just going to say, President Trump said he had a great talk with you. He also suggested that if he had his way, he would essentially flood the city of Chicago with federal law enforcement. I want to play some sound from him and get your reaction. Take a listen.

Lori Lightfoot: (02:18)
That’s classic Trump hyperbole. I sent him a letter on Monday outlining the very specific things that the federal government is uniquely qualified to help with, starting with common sense gun control. The fact of the matter is our gun problem is related to the fact that we have too many illegal guns on our street, 60% of which, 60% of which, come from states outside of Illinois. We are being inundated with guns from states that have virtually no gun control, no background checks, no ban on assault weapons. That is hurting cities like Chicago. That is the thing that if the president really wanted to help, that and the other things I identified in my letter, he could do today, tomorrow, but he’s not really interested in helping in that way.

Jake Tapper: (03:08)
Well he’s obviously not going to support any restrictions on gun ownership. Would you support an increased federal presence in Chicago as long as they coordinated with local officials, local law enforcement and the U.S. attorney?

Lori Lightfoot: (03:21)
Well I’ve said it before and I’ll say it again. No troops, no agents that are coming in outside of our knowledge, notification and control, that are violating people’s constitutional rights. That’s the framework. We can’t just allow anyone to come into Chicago, play police in our streets and our neighborhoods, when they don’t know the first thing about our city. That’s a recipe for disaster and that’s what you’re seeing playing out in Portland on a nightly basis. We don’t need that here, that is not a value add, and it doesn’t help enhance our public safety.

Jake Tapper: (03:56)
The president of the Chicago Fraternal Order of Police disagrees with you. He says they need federal help. “Mayor Lightfoot has proved to be a complete failure who is either unwilling or unable to maintain law and order here. These politicians are failing the good men and women of this city and the police department.” What’s your response to that?

Lori Lightfoot: (04:15)
There’s no polite response to that, so I’ll just say this. We’re in the middle of contract negotiations with the FOP. He knows that we’re going to have a reckoning with them that imposes accountability measures that they adamantly resist, so he’s pandering to the crowd. He is completely out of touch with reality. He wants to hold on to a status quo that has failed everyone, including his members. We’re not having that, so I expect to hear more nonsensical things from him.

Jake Tapper: (04:47)
Cook County just passed a grim milestone with more than 100,000 coronavirus cases. Chicago public schools have released a draft plan that will reopen schools with a hybrid of remote learning and in-person classes in the fall. A Kaiser study finds that one in four teachers nationwide are at high risk of serious illness from coronavirus because of either age or underlying conditions. Should those teachers come into work or should they stay home?

Lori Lightfoot: (05:13)
First of all what we have released is a framework for further engagement with all of the stakeholders in our school community. Parents, teachers, staff, principals, and obviously we want to hear from our students as well and those discussions are ongoing. Whether we fully open up, whether we go with a hybrid, is going to be dictated by the public health guidance at the time. That’s critically important. Our public health guidance is at the forefront of what we’re doing throughout our city government but particularly in thinking about how our students will start their learning after Labor Day, and obviously we’re aware of the fact that there –

Lori Lightfoot: (05:52)
Are challenges in our workforce.