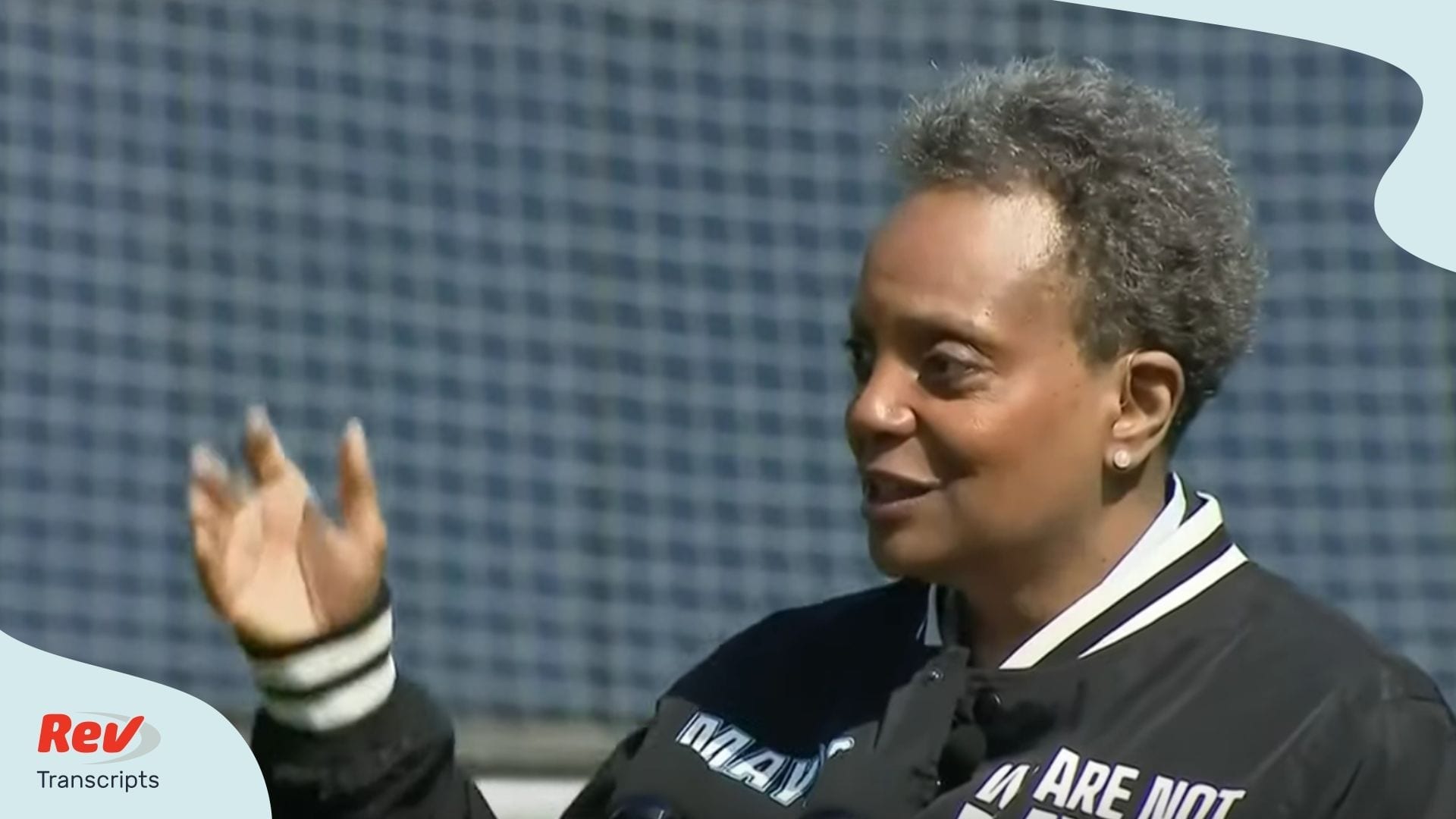 Mayor Lori Lightfoot announces the “We Are Not Playing” initiative involving Chicago professional athletes in a coronavirus press briefing on April 6.

Try Rev for free and save time transcribing. Transcribe speeches, interviews, meetings, town halls, phone calls, and more. Rev is the largest, most trusted, fastest, and most accurate provider of transcription services and closed captioning & subtitling services in the world.

Lori Lightfoot: (00:00)
The city of Chicago several years ago stepped up in a major way, in a major way, and donated 750 N95 masks to the city of Chicago and another portion to the state of Illinois. That, friends, is true civic leadership. Thank you to McDonald’s. We also have to continue thanking and holding in our prayers and doing everything that we can support our healthcare workers, our frontline city workers, and of course our valiant first responders. Those who have been setting up the alternative care facilities and sites like McCormick Place, delivering food to our families and seniors and CPS students and doing so much more every single day to make sure that this city is strong and vibrant even in this very difficult time. We owe them a debt of thanks, now and forever. Before I step away, I want to show you a preview of what’s to come from your favorite sports teams beginning this week. Can we play the jumbotron?

Speaker 8: (01:38)
It would mean the world for the folks who are risking their lives for us.

Lori Lightfoot: (01:51)
Thank you. Happy to take any questions that you have. Yes, sir?

Lori Lightfoot: (02:17)
Well, we’re going to keep stepping up our enforcement efforts. By and large, the vast majority of people have been complying, but we know that the parks continue to be an attraction, and I want to be clear, it’s not that people are going out, although we want people to really stay home. The issue is congregating, and that’s what we can’t tolerate. When we see that, the police had been very aggressive in issuing dispersal orders, citations where necessary, and luckily we’ve only had a small number of arrests, but people have to understand, yes, it’s a beautiful day. The weather’s getting warmer, but we need people to continue to comply.

Speaker 11: (02:58)
Mayor, COVID-19 has hit the African-American community particularly hard. 70% of Chicagoans who’ve died of COVID-19 are African-American, 58% countywide. I wonder if you could share your thoughts on that and what can be done to drive down those numbers.

Lori Lightfoot: (03:15)
Well, we’re going to be holding a press conference a little later today at one o’clock to specifically address it, but it’s devastating. To see those numbers and knowing that they’re not just numbers, they’re lives. There’s families and communities that have been shattered. That’s why we will be announcing a very robust and immediate comprehensive plan to address this, but we also have to think about this in a context of really what the Chicago Department of Public Health has been saying now for years. We have equity and health access disparities all across our city and particularly in black and brown neighborhoods. We know the problems of diabetes, of heart disease, of respiratory illness are really prevalent in communities of black and brown folks. We know that access to healthcare is a similar challenge in a lot of those communities and so this disease that is just ruthless in the way that it attacks.

Lori Lightfoot: (04:17)
That is why we’ve been saying from day one, the vulnerable population, seniors 60 years and older and even more acute at older ages, people with underlying conditions, they are the very vulnerable populations that we’ve been talking about since the onset of this pandemic and with good reason, because we knew that they were going to be the ones that were most at risk and unfortunately the data has proved that out. Now, I’ll say more about this later, but this is something that is a public health red alarm that we have to make sure that we are stepping up as a community to address it and we’re going to be activating every part of the black and brown communities, from the faith community to elected officials, to neighborhood organizations and of course the network of health providers, not just the hospitals but also the doctors, the insurance companies.

Lori Lightfoot: (05:15)
This is something that we have to tackle as a community. Now we’re not going to be able to erase decades of health disparities in a few days or a week, but we have to impress upon people in these communities that there are things that they can do. There are tools at their disposal that they can do to help themselves, but we have to call this out as it is and make sure that we’ve got a very robust multi-tiered response now and going forward, and we will.

Speaker 12: (05:46)
Are there populations you feel like you’re going to be able to access by leveraging athletes to communicate with them and how do you measure success with that goal, that you have communicated with those people?

Lori Lightfoot: (05:56)
Look, this is all about making sure that we can educate people and particularly educate people in compliance about the stay at home order. Obviously athletes have amazing cache. I remember over NBA weekend I was in a group of young people and there were some veteran NBA players that I knew from back in the day, Muggsy Bogues and other folks, and it was a group of teenagers that were there and like, all right, I kind of maybe heard that name, but the minute Zach LaVine walked in the room, it was like the light had shined brightly. We know that in thinking about the stay home, save lives campaign, we’ve got to use multi mini-campaigns and a lot of different tools so we’re reaching every segment of our population. As I’ve said more over and over again, this is a disease that doesn’t discriminate. It really doesn’t.

Lori Lightfoot: (06:48)
Young people. I remember back in the day thinking nothing could stop me, that I was invincible. We can get credible messengers like sports athletes who can really reach sports fans but also young people in particular. That’s why we’re activating this group of people because we know that they have cache. We know that they have reach and having them on board, I can’t be more grateful because I think it is going to have an enormous benefit and end up saving lives.

Speaker 13: (07:22)
On topic question from Bill Cameron. Is it time for teams to play with no fans in the stands?

Lori Lightfoot: (07:31)
Well look, I think we’re not at that point yet but I know that the various sports leagues are talking about a variety of different options depending on how long the public health personnel believe that we need to be reducing the size of crowds. We’re here in beautiful and iconic Soldier Field to really mark the fact that this has affected the sports teams. The NBA immediately canceled its remaining season when we saw that a couple of NBA players were tested positive for the virus and then every other sports league really followed suit. On March 21st we were supposed to be celebrating the home opener of the Chicago Fire.

Lori Lightfoot: (08:16)
This has had a profound effect on who we are as a people. We are a great sports town. We have tremendous sports fans, not only here in Chicago but across the US and the world that follow our teams because they are good and strong but this has also obviously had a dramatic effect on the athletes and the other people that really come together to make sure that sporting events in the city have a reach that’s really beyond a lot of other businesses. The economic impact alone is pretty profound.

Speaker 13: (08:53)
Last two questions from Charlie Mayerson. Is the city tracking reports of tenants evicted for failure to pay rent or the expiration of leases for which they’ve been unable to find suitable replacement housing? What is the city’s latest counsel for those that are displaced?

Lori Lightfoot: (09:14)
Well, what we did initially at the end of March in advance of the April 1 rent date is we set up a fund of $2 million that we’ve now pushed out to people to help them pay their rent. So that’s in place. We’re looking at round two. I have to give thanks to the United Way and the Chicago Community Trust who are also pushing out resources to not-for-profit organizations and their employees to help them really address the economic crisis. We’re in conversation with people at the state level about what we can do to stop evictions in Chicago and Cook County. Our sheriff has said no evictions will be enforced for 30 days and I’ve consistently been calling upon mortgage holders and landlords to make sure that they are giving people grace in this really difficult time.

Lori Lightfoot: (10:07)
We set up the Small Business Resiliency Fund to make sure that we could put money in payrolls and help small businesses be able to pay their workers so that the ripple effect that happens when you’re out of work and you don’t have a job doesn’t create, or we at least put some steps in, to mitigate the economic devastation that too many people are worried about and some are suffering and experiencing.

Speaker 13: (10:32)
Last question also from Charlie Mayerson. San Francisco has moved to shut down almost all of its mass transit. Under what circumstances should or would Chicago and the CTA consider doing the same?

Lori Lightfoot: (10:49)
Well, our CTA is a vibrant part of our community life and the people that are going to work, the healthcare workers, first responders, the frontline workers who don’t have the option but are essential to making sure that city services are vibrant, but also our healthcare system is vibrant, the people who are feeding our children and CPS, those folks ride the CTA. Shutting down the CTA would have a ripple effect in all the negative ways in the areas of our city that we need to stay strong, particularly our healthcare system. I don’t see a circumstance where we are going to shut down the CTA. I also don’t see as a circumstance we’re going to substantially cut services unless that’s absolutely essential because if we cut services, what does that mean?

Lori Lightfoot: (11:37)
That means that people are going to be crowding the buses and the trains even more because they don’t have as many options. This is something that we’re looking at. Dorval Carter, the President of CTA, is in weekly conversations with systems across the country and looking at best practices and the things that they’re experiencing, but our folks really rely upon the CTA and we’ve got to make sure that we’re there for them.