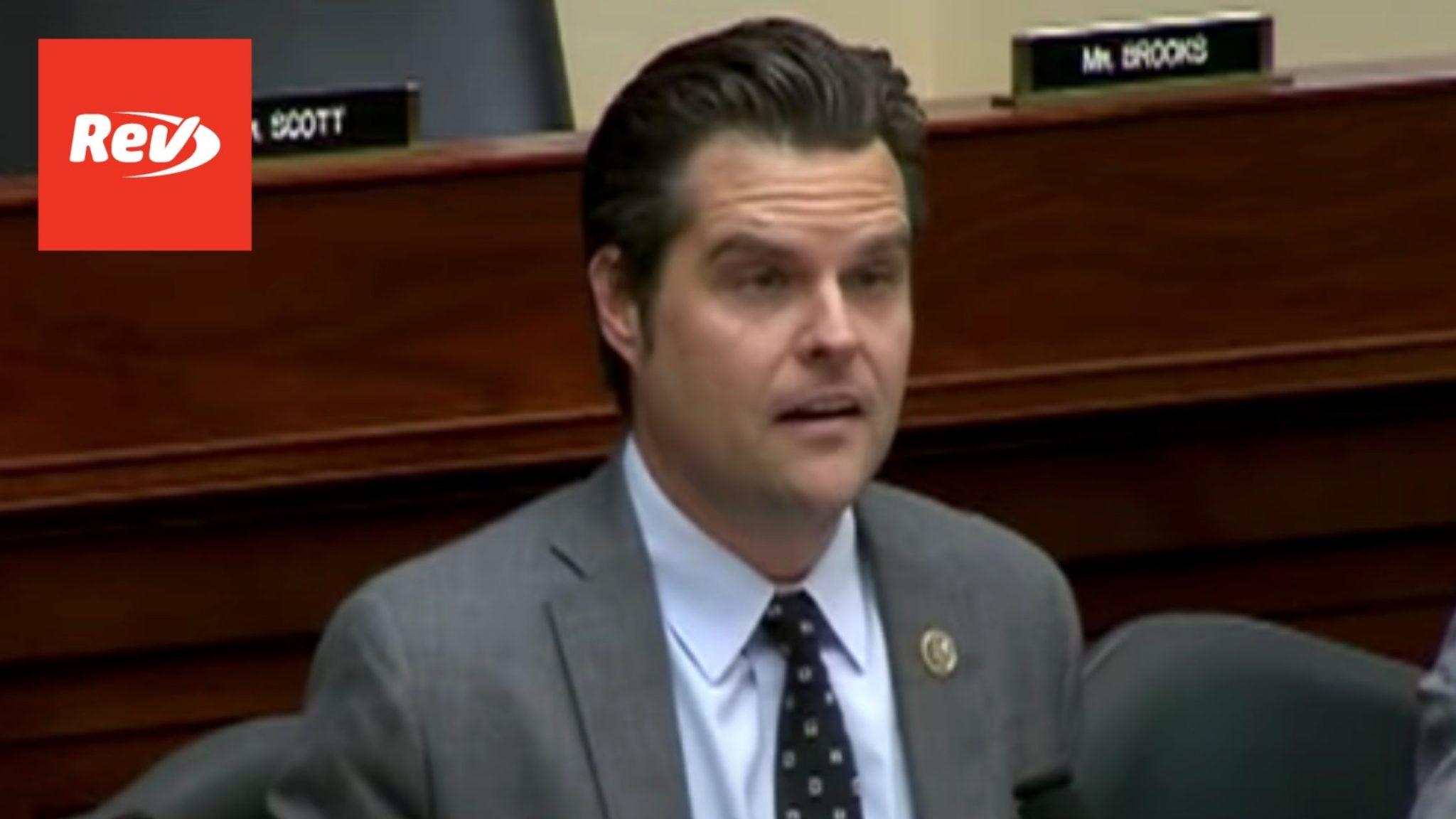 Rep. Matt Gaetz said Gen. Mark Milley and Defense Sec. Lloyd Austin “deserve” to be fired in a heated exchange during a House hearing on the Afghanistan exit. Read the transcript of the exchange here.

General Milley: (00:20)
I believe that that was an issue, a strategic stalemate, and that if we had remained in Afghanistan with the advisory levels of effort than the government of Afghanistan, the Afghan Security Forces.

Representative Gaetz: (00:30)
That’s an interesting answer to a question. It’s just not one I asked. You spent more time with Bob Woodward on this book than you spent analyzing the very likely prospect that the Afghanistan government was going to fall immediately to the Taliban. Didn’t you?

Representative Gaetz: (00:45)
Oh really? Because you said right after Kabul fell that no one could have anticipated the immediate fall of the Ghani government. When did you become aware that Joe Biden tried to get Ghani to lie about the conditions in Afghanistan? He did that in July. Did you know that right away?

Representative Gaetz: (01:03)
You’re not aware of the phone call that Biden had with Ghani where he said, “Whether it is true or not, we want you to go out there and paint a rosy picture of what’s going on in Afghanistan.” You’re the chief military advisor to the president. You said that the Taliban was not going to defeat the government of Afghanistan militarily, which by the way they cut through them like a hot knife through butter. And then the president tries to get Ghani to lie. When did you become aware of that attempt?

General Milley: (01:26)
Two things that are, Congressman, if I may. One is what I said was the situation was stalemate. And if we kept advisers with there, the government of Afghanistan and the army would have still been there. That’s what I said. Whether that’s right or wrong, I don’t know. But …

Representative Gaetz: (01:44)
… With the Taliban in control. I have a question for Secretary Austin. Secretary Austin, are you capable of assessing whether another has the will to fight?

Secretary Austin: (01:54)
No, we’re not. And that’s the point that the Chairman made earlier.

Representative Gaetz: (01:58)
That’s just like an incredibly disappointing thing for the Secretary of Defense to simply say, I can’t assess whether someone has the will to fight, but it is consistent with your record. I mean, during the Obama Administration, I think they gave you about $48 million to go train up some folks in Syria to go take on the Assad government, and I think your testimony was that only four or five survived first contact with the enemy. So what confidence should this committee have in you or should the country have in you when you’ve now confessed to us, and whether it’s the swing and a miss in Afghanistan that General Milley talked to the Senate about yesterday, total failure, or whether it was your failures in Syria?

Representative Gaetz: (02:35)
You don’t seem capable to look at a fighting force and determine whether or not they have the will. Is that an embarrassing thing?

Secretary Austin: (02:41)
You recall, Congressman, that the end result was the SDF that we stood up that was very, very instrumental in turning the tide of a battle up in Syria.

Representative Gaetz: (02:53)
Oh yeah, turned it so much. You’ve got a sod in power in Syria. You’ve got the Taliban in power in Afghanistan. I mean, where have you been?

Secretary Austin: (03:01)
The focus was ISIS, Congressman, and those forces had significant effect on the ISIS network.

Representative Gaetz: (03:11)
It just seems like you’re chronically bad at this. And you have admitted that, I guess, which is to your credit. But when people in the military like Lieutenant Colonel Stuart Scheller stand up and demand accountability, when they say that you all screwed up, when they point out that General Milley statement that the government of Afghanistan is not going to get defeated by the Taliban. Well, he ends up in the brig and you all end up in front of us and your former employer Raytheon ends up with a lot of money and we have poured cash and blood and credibility into a Ghani government that was a mirage.

Representative Gaetz: (03:47)
It fell immediately. And while the guy sitting next to you was off talking to Phil Rucker and was off doing his thing with Bob Woodward, we were buying into the big lie, the big lie that this was ever going to be successful, and that we could ever rely on the Afghanistan government for anything at all. General Milley, you kind of gave up the game earlier when you said you wanted to address elements of your personal conduct that were in question. We’re not questioning your personal conduct. We’re questioning in your official capacity going and undermining the chain of command, which is obviously what you did.

General Milley: (04:24)
Did not undermine the chain of command in any manner that they performed, Congressman.

Representative Gaetz: (04:29)
Well, you know what, you said yesterday that you weren’t going to resign when senators asked you this question, and I believe that you guys probably won’t resign. You seem to be very happy failing up over there. But if we didn’t have a president that was so addled, you all would be fired because that is what you deserve. You have let down the people who wear the uniform in my district and all around this country. And you’re far more interested in what your perception is and how people think about you and insider Washington books than you care about winning …

Representative Gaetz: (05:04)
… Which this group seems incapable of doing.