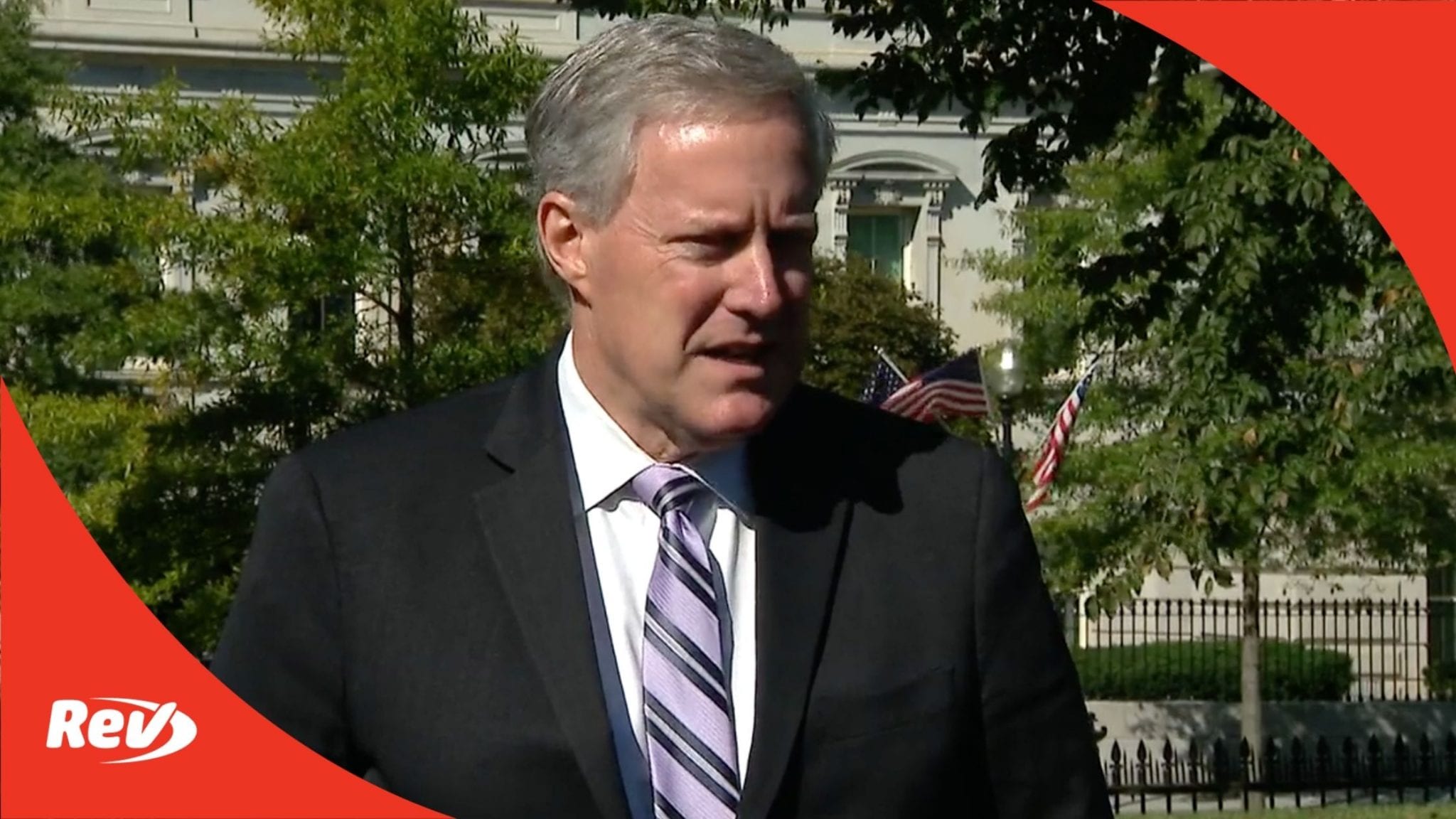 White House chief of staff Mark Meadows spoke to the press on October 2 to address President Trump’s coronavirus symptoms. He said the president is in “good spirits” and has “mild symptoms.” Read the transcript of his remarks here.

Mark Meadows: (00:00)
A great jobs report this morning. Unemployment down below 8% and the economy continues to be robust in its V-shaped recovery and unfortunately, that’s not what everybody’s focused on this morning.

Mark Meadows: (00:15)
As all of you know, the president and the first lady tested positive for COVID-19. They remained in good spirits. The president does have mild symptoms and as we look to try to make sure that not only his health and safety and welfare is good, we continue to look at that for all of the American people.

Mark Meadows: (00:45)
He continues to be not only in good spirits but very energetic. We’ve talked to a number of times this morning. I got the five or six things that he had tasked me to do, like I do every single morning and he is certainly wanting to make sure that we stay engaged.

Mark Meadows: (01:04)
I think the other thing that is critically important, the doctors continue to monitor both his health and the health of the first lady. We’ll continue to do that. They’ll be glad to provide some updates later today as we look at this. But I think the great thing about this president is not only is he staying committed to working very hard on behalf of the American people, his first question to me this morning was, is, how’s the economy doing? How are the stimulus talks going on Capitol Hill? A number of us in the core team of the White House, continue to get tested on a daily basis, like we have been.

Mark Meadows: (01:55)
And as we look to that, we were very excited about making sure that not only that the health and safety of the president and the first lady is addressed, but certainly that we address this battle together, as a nation together, and the American people can rest assured that we have a president that is not only on the job, will remain on the job, and I’m optimistic that he’ll have a very quick and speedy recovery.

Speaker 2: (02:35)
How would you describe your symptoms and is he taking hydroxychloroquine?

Mark Meadows: (02:38)
Well, I’m not going to get into any particular treatment that he may or may not have. He has mild symptoms. As we look at that, the doctor will continue to provide expertise in the residence. He’s in the residence now and in true fashion, he’s probably critiquing the way that I’m answering these questions and I can tell you that a number of us will be reporting back to him on the task at hand.

Speaker 3: (03:14)
What day and time, would you just clear this up? What day and time did you find out that Hope Hicks and tested positive and did you just sit on it until after the president went out to his fundraiser in New Jersey?

Mark Meadows: (03:26)
Actually, as we look at this, I’m not going to get into the tick-tock. I can tell you, in terms of Hope Hicks, we discovered that right as the Marine One was taking off yesterday. We actually pulled some of the people that had been traveling and in close contact. The reason why it was reported out just frankly, is that we had already started the contact tracing just prior to that event.

Mark Meadows: (03:54)
As you know, last night, even in the early hours of this morning, the minute we got a confirmatory test on the president, we felt like it was important to get the news out there at that time and so that’s why we sent out the tweet late or actually early this morning.

Mark Meadows: (04:25)
Yeah. So I’ve obviously been tested. We’re hopefully more than six feet away and if there’s any concern there from a guidance standpoint, we have protocols in place and early on, when we first started to tackle the COVID-19 battle, we actually did two different things in the White House, a number of contingencies, as we looked at not only additional testing but certainly mitigating the risks for social distancing in private meetings and the like.

Mark Meadows: (05:03)
But I think it goes to the broader question is, is even with a lot of the mitigating factors, Jim, what you have is, is a virus that is contagious, that certainly continues to be regardless of whatever protocol we have, that it has the ability to affect everybody. As you know, the president, we keep a pretty wide circle. All of you that have interacted with him know that and so even with that wide circle around the president, we find that he’s having to deal with this, like so many millions of other Americans and people around the world have had to do.

Mark Meadows: (05:41)
I can tell you that what we’re doing is focusing on the therapeutics, the vaccines, continuing to do that and that doesn’t change.

Speaker 5: (05:51)
[crosstalk 00:05:51] Ask really quickly, the officials who were on the flight with the president on Wednesday, including Kushner, Scavino, I think Stephen Miller was there. Are they all quarantining? Have they been tested?

Mark Meadows: (06:06)
We’ve tested all of our core staff and I can tell you that Mr. Kushner, Mr. Scavino, myself, a number of us have been tested, have come back with, with negative results and yet at the same time, I fully expect that as this virus continues to go on, other people in the White House will certainly have a positive test result and we’ve got the mitigation plan in place to make sure that the government not only continues to move forward but the work of the American people continues to move forward. And so even as recent as this morning at a little after eight o’clock, the president was giving me a number of things to make sure that I get done and I’m sure that I will actually have those do outs have to be back to him later today.

Mark Meadows: (07:09)
I’m not going to… So I wanted to come out and give an update to all of you, so that show the courtesy of giving an update. We’ll have future updates. I’ll be glad to do that but any other specifics at this point would be naught.