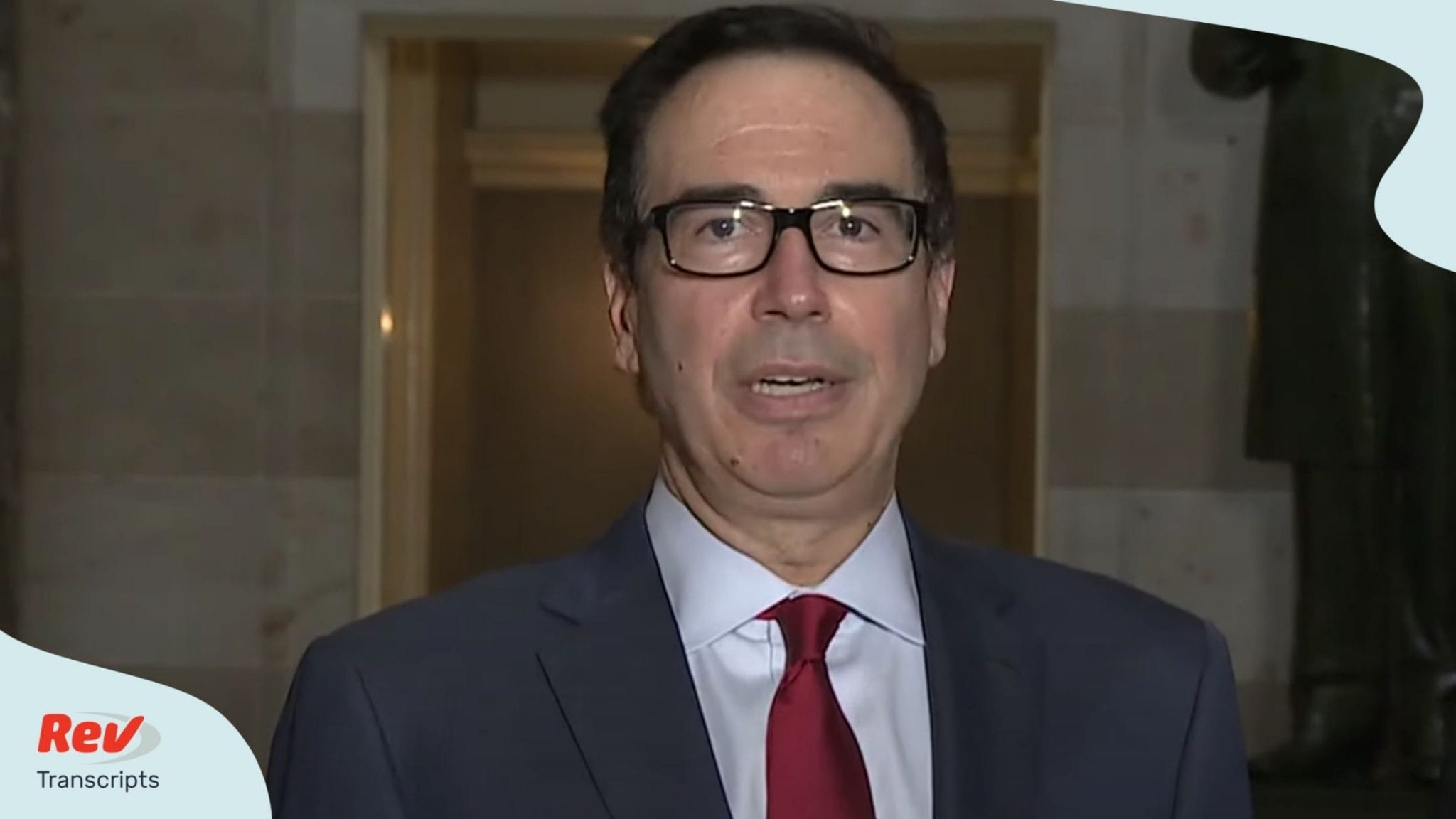 Mnuchin: (00:03)
Well, we were glad to just watch the speaker and hear her say that she wants to get a deal and she wants to compromise because we do agree. Legislation is better for the American people. We are very focused on kids in jobs, and these are critical issues. Despite the fact that we had a very good jobs number this morning, there’s still too many people that are out of work at no fault of their own because of this coronavirus. So time is very important. That’s why we’re here. We have schools that are getting ready to open. We have kids that need to be protected as they go back to school. I’ve reached out between yesterday and today to several Democrat governors, several mayors, to understand what the costs of schools are. I didn’t yet call the Republican, I’ll call some Republican states, the chief and I today. We want to make sure that the states have enough money to open the school safely.

Mnuchin: (01:02)
I think as you know, we’ve allocated what was in the Heroes Act and added a little bit more money. Despite the fact that the Democrats would like more money, we are speaking to the States to make sure that they have enough money. I’ve also heard from many schools and universities, they’re worried about liability. As you know, we think it’s very important that we have Corona related liability protection in here. Now the president would like us to make a deal, but unfortunately we did not make any progress today. We discussed the same issues. We did come back up. We were requested to have another meeting. And let me just say, to the extent that they are willing to make new proposals, the chief and I will be back here any time to listen to new proposals. But we have asked them for a specific compromise on state and local and a specific compromise on unemployment.

Mnuchin: (01:58)
We have not received proposals on that. Let me just say, as I said before, I think there’s other areas we have made a lot of progress on. We know we need broadband for kids to be able to access who can’t get in. I think we can reach an agreement on that. The speaker just mentioned food, we want to make sure that kids have food. We’re not going to agree to longterm policy changes, but the things that they wanted for through next year through January, we’ve agreed to. So I think there’s a lot of areas of compromise. I think if we can reach an agreement on state and local and unemployment, we will reach an overall deal. And if we can’t, we can’t.

Meadows: (02:39)
Yeah, I think it’s interesting just to hear the comments from Senator Schumer and Speaker Pelosi saying that they want a deal, when behind closed doors, their actions do not indicate the same thing. And as we look at this particular issue, this the secretary is right. We’ve offered $105 billion for children to attend school. The Democrats said that’s not enough. At $915 billion for state and local, that’s where they were two weeks ago. Today they’re at $915 billion.

Meadows: (03:24)
Now, if you’re talking about compromise, even with their trillion dollar Washington, DC magical way of saying they’re going to come down a trillion, they can’t come up with any significant cuts in their bill. What they want is a two and a half trillion dollar blank check. And I can just tell you, the president has encouraged us not only to negotiate and as the secretary indicated, to come back and negotiate in good faith. But at this point, I’m extremely disappointed that we came up here today just to hear the same thing repeated over and over again, which is the same thing that we’ve heard repeated for the last two weeks.

Mnuchin: (04:09)
The chief and I will recommend to the president based upon our lack of activity today to move forward with some executive orders. Again, we agree with the speaker, this is not the first choice. But people have run out of the enhanced unemployment, so that is something we will recommend an executive order on. And it relates to rental foreclosures, we will recommend an executive order on that and also student loans. So it’s going to take a little bit of time for us to finalize these and process them, but we’ll do them as quickly as we can because the president wants action. He realizes again, despite what was a big pickup in jobs, there’s still too many people that are impacted by that.

Mnuchin: (05:12)
Again, what I would say is there’s both a topline issue, but there are also policy issues. Again, let me just emphasize, I think there are areas where there is broad bipartisan agreement. It doesn’t mean that we finished all those areas, but whether it’s the PPP, whether it’s other areas. Again, on the school issue, we have a broad understanding of what we want to accomplish. We’re still going back and forth on some numbers and we’re going to be fact-based. As I said, we’re reaching out to states to make sure we have good numbers. But at this point we’re going to recommend to the president that over the weekend, we move forward with some executive actions.

Mnuchin: (05:54)
Again, I think as you know, we’ve made a compromise offer on UI as part of the legislation. I think it’s a very fair proposal that covers the issues. And, and again, we have been willing to compromise on UI. We’ve been willing to compromise on state and local. We understand, there are workers in state and local governments. There’s firefighters, there’s police, there’s first responders, there’s people who are in hospitals that have been working around the clock because of this virus. And we understand we need to pick up those costs. So it, again, it’s something we’re addressing. Thank you.

Meadows: (06:32)
Yeah. I think probably the other thing that is fair to point out is where we hear this compassionate talk. The enhanced unemployment has expired. The Democrats have had an opportunity multiple times to extend even what we’re doing right now. And they have consistently said, “No.” Where is the compromise in any of that? It’s important that as we look at this and the secretary was right, they’ve made no offers as it relates to enhanced unemployment, and they’ve made no offers as it relates to state and local funding. Both of those are still where they were

Mnuchin: (07:11)
And we are very flexible. If there’s areas of agreement that we can agree on, pass legislation and come back to the areas outside of that, we’ll do that. We want to move forward for the American people.

Speaker 5: (07:23)
It seems, just listening to what you guys had said for the past two weeks and what you’re saying now, you’ve been saying the same thing respectfully, the negotiations have been in the same place they’ve not been for two weeks.

Mnuchin: (07:45)
Let me just say, in all fairness, we have cataloged a lot of issues. So there have been times we’ve gone through, we understand their area. They understand us. There are areas I am very confident that we can compromise and reach an agreement.

Mnuchin: (08:01)
She is not willing to do a partial deal. Again, I don’t want to speculate as to whether there is an agreement or not. We will continue to try to get an agreement that’s in the best interest of the people. And that’s why we’re here.

Meadows: (08:12)
But in the meantime, we’re going to take executive orders to try to alleviate some of the pain that people are experiencing. This is not a perfect answer, we’ll be the first ones to say that. But it is all that we can do and all the president can do within the confines of his executive power, and we’re in going to encourage him to do that.

Mnuchin: (08:37)
I mean, I don’t want to anticipate anything. Again, just as they said, we’re open to listen to new offers. Again, if they have compromises on UI and state and local, we’re ready to be here to negotiate.