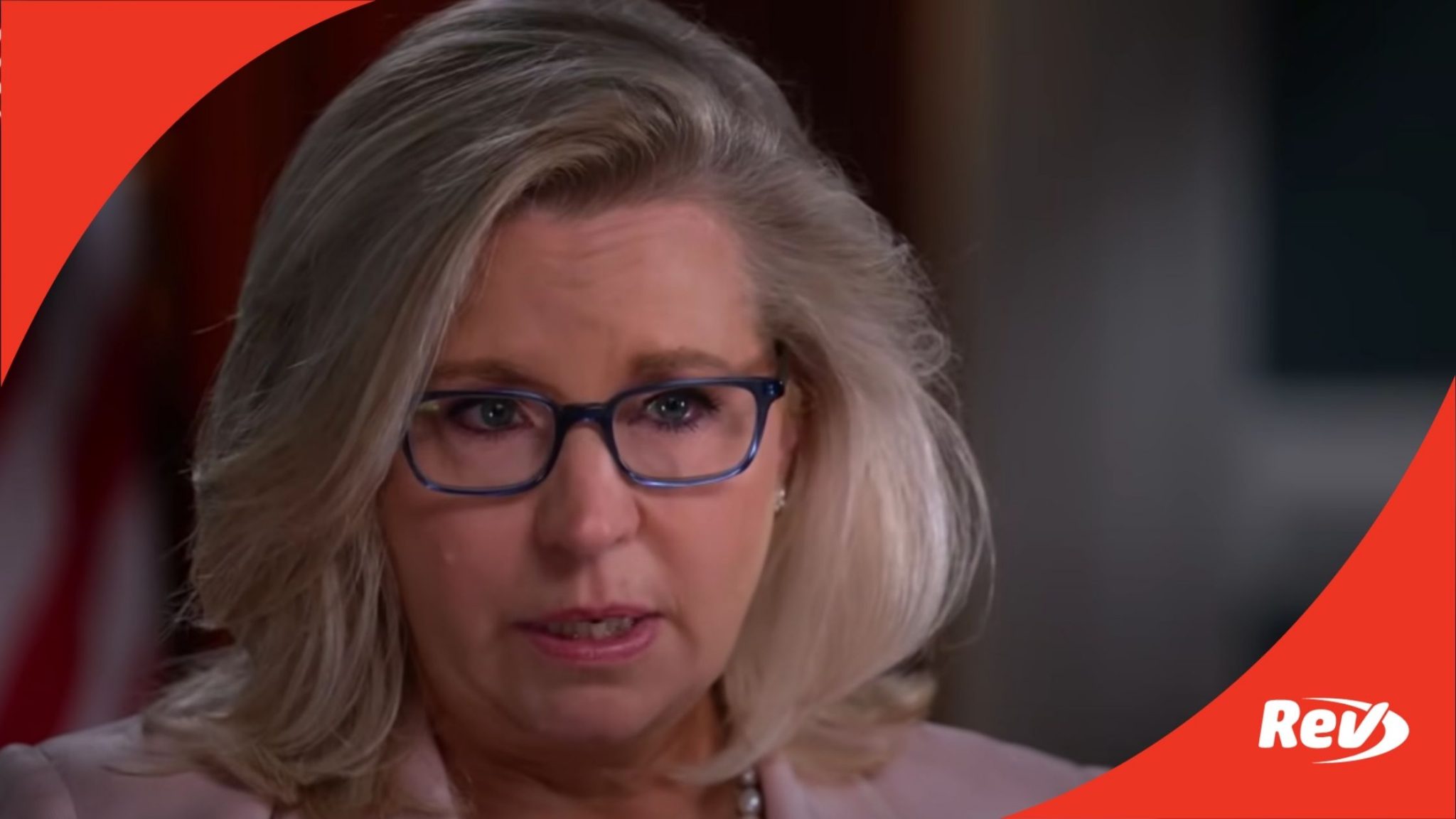 Rep. Liz Cheney was interviewed on 60 Minutes on September 26, 2021. She discussed her re-election campaign as an anti-Trump Republican. Read the transcript of the interview remarks here.

Lesley Stahl: (00:01)
This past week, the House Select Committee investigating the January 6th attack on the Capitol shifted into a higher gear. On Thursday, it’s subpoenaed four of former president Donald Trump’s top advisors, including his chief of staff, for documents and depositions about the former president’s actions on the day of the siege and days leading up to it. At the center of the Select Committee’s probe is Wyoming representative, Liz Cheney. Like a lone ranger riding out of the west, she’s one of the few Republicans willing to, daring to stand up to Mr. Trump and House Republican leaders who opposed her joining the committee.

Lesley Stahl: (00:44)
When we spoke to Congresswoman Cheney at the Capitol on Wednesday, we asked about a call she got from House Speaker Nancy Pelosi.

Liz Cheney: (00:59)
She called me and asked me to be a member of the committee, and I accepted.

Liz Cheney: (01:09)
None. Because it’s so important. And because I also know that that my participation in the committee makes that committee bi-partisan. No one will question my conservative credentials.

Lesley Stahl: (01:24)
But most Republicans in The House see what you’re doing as a betrayal. They look at Nancy Pelosi. Even you have said … you said this. I’ve got a quote here. You said, “The Democrats under Nancy Pelosi’s leadership have become the party of antisemitism, infanticide and socialism.” Direct quote from you. Yet here you are, it’s considered Nancy Pelosi’s committee.

Lesley Stahl: (02:11)
She’s one of only two Republicans on the nine member committee and a prominent face of it, since she was elevated to vice chair.

Liz Cheney: (02:20)
We must also know what happened every minute of that day in the White House.

Lesley Stahl: (02:25)
Republicans in Congress feel that by joining this January 6th panel, you are helping to keep the focus on Trump instead of on the shortcomings of the Biden administration.

Liz Cheney: (02:40)
Those who think that by ignoring Trump, he will go away, have been proven wrong. In my view, the American people, they deserve better than having to choose between what I think are the really disastrous policies of Joe Biden in a whole range of areas. Really bad for our economy. From a national security perspective, what’s happened, what he’s done in Afghanistan. Very dangerous policies for the country. But the alternative cannot be a man who doesn’t believe in the rule of law and who violated his oath of office.

Lesley Stahl: (03:18)
Her unabashed, defiance of Donald Trump has him fighting back.

Lesley Stahl: (03:25)
He singled her out at his rally on January 6th and later said she’s a warmongering fool and a horrible human being. He’s made defeating her next year in her reelection in Wyoming, one of his top priorities. She’s risking her political career.

Lesley Stahl: (03:44)
Most Republicans we’ve spoken to feel that you miscalculated. That you didn’t figure out ahead of time that it was going to be this intense, this hot, this perpetual.

Lesley Stahl: (04:30)
Here in Wyoming, Liz Cheney at 55 is having to fight like hell to win her fourth term as Mr. Trump endorsed one of her opponents, Harriet Hagerman, a long time Cheney supporter and family friend.

Lesley Stahl: (04:45)
The Republican party here has disowned you. They’ve called for your resignation. We’ve been told your approval rating here is down around 30%. Can you win this seat?

Liz Cheney: (04:56)
Absolutely. I think it’s going to be the most important house race in the country in 2022. It will be one where people do have the opportunity to say, we want to stand for the constitution.

Lesley Stahl: (05:32)
Being in trouble in Wyoming is almost unfathomable for a Cheney.

Liz Cheney: (05:37)
Help to ensure that the voice of Wyoming is heard in Washington.

Lesley Stahl: (05:41)
Despite criticism of her father, Dick Cheney’s tenure, as vice-president, when he pressed the case for the broadly discredited war in Iraq and harsh interrogation techniques. He’s been long admired here, having been Wyoming’s congressmen for 10 years.

Lesley Stahl: (05:57)
Did you go to your father and ask for his advice on this? And did he encourage you to wage this rebellion?

Liz Cheney: (06:04)
Well, I talk to my dad probably just about every single day and he sees things the way that I see them.

Lesley Stahl: (06:11)
She was exposed to the highest levels of power in Washington when her father was president Ford’s chief of staff, but she says her roots are in Wyoming where the cowboy ethic of the maverick loner runs deep. She’s been called steely and as emotional as algebra, but she softens up when she talks about her family.

Liz Cheney: (06:37)
I miss these years when they were little babies.

Lesley Stahl: (06:40)
Most people don’t know that she’s been married for 29 years and is the mother of five children ranging in age from 15 to 27. As they grew up, she became a rodeo mom.

Lesley Stahl: (07:06)
She’s having to cowgirl up a lot in Washington. In May, her fellow Republicans stripped her of her leadership position in The House. And she began denouncing minority leader, Kevin McCarthy in scathing and personal terms.

Liz Cheney: (07:21)
What he’s done is embraced Donald Trump. If I were doing what he’s doing, I would be deeply ashamed of myself. I don’t know how you explain that to your children. When you are in a situation where you have somebody who did what Donald Trump did, it is absolutely clear, he cannot continue to be somebody you embrace.

Lesley Stahl: (07:41)
But are you saying you can’t support anybody who supports him?

Liz Cheney: (07:46)
I’m saying that there are people who supported Donald Trump because of his policies, but there’s a difference between somebody who voted for Donald Trump and being the Republican leader after an insurrection and setting all of that aside and going to Mar-a-Lago and rehabilitating him, bringing him back in. That to me is unforgivable.

Lesley Stahl: (08:06)
Once she began assailing Donald Trump and Republicans who support him, a record amount of money has poured into her campaign. Some of it we’re told, from Democrats. You have become in a way a hero to the liberals, which is kind of funny, because as you say yourself, you’re one of the most conservative members of the house. You’re anti-abortion-

Lesley Stahl: (08:32)
You’re pro-gun rights. And you voted to repeal Obamacare. Do you regret that vote?

Lesley Stahl: (08:46)
But you support waterboarding?

Lesley Stahl: (08:50)
And then there’s her long held opposition to same-sex marriage, which prompted a bitter falling out with her sister, Mary.

Lesley Stahl: (08:59)
Your sister’s gay. She’s married. She has children. And in 2013, you came out against same-sex marriage while your father went the other way. It was looked upon as courageous when he did that. How do you defend what you did?

Liz Cheney: (09:47)
This is an issue that we have to recognize as human beings, that we need to work against discrimination of all kinds in our country, in our state. We were at an event a few nights ago, and there was a young woman who said she doesn’t feel safe sometimes because she’s transgender and nobody should feel unsafe. Freedom means freedom for everybody.

Lesley Stahl: (10:19)
Her change of heart is a rare break for her from traditional party orthodoxy. Once Donald Trump became the Republican nominee for president in 2016, she supported him. You stuck with him through the Hollywood access tape, through his insults on John McCain, through his bullying tweets.

Liz Cheney: (10:39)
I supported Donald Trump’s policies. I voted with him something like 93% of the time because his policies were the right ones in many ways. When I disagreed with him, I spoke out, but-

Liz Cheney: (10:56)
On the issues that mattered for Wyoming, I stood with him. You can say you disagree with him. You think that his character was bad, which it was. All of those things. But the line that can’t be crossed is what happened after the election.

Lesley Stahl: (11:13)
It’s not that Liz Cheney doesn’t have any Republican support. Former president George W. Bush is holding a fundraiser for her and senators, Mitch McConnell and Lindsey Graham have sent in donations from their political action committees. But most Republicans in office have shied away. Have members of Congress, Republicans, come up to you privately and whispered in your ear, “Way to go Liz.” And encouraged you, but won’t come forward and say that publicly?

Lesley Stahl: (11:50)
I mean, if they really think what you’re doing is right and they admire it and they encourage it and they won’t do it, what is that?

Liz Cheney: (11:59)
The argument that you often hear is that if you do something that’s perceived as against Trump, you’ll put yourself in political peril. That’s a self fulfilling prophecy, because if Republican leaders don’t stand up and condemn what happened, then the voices in the party that are so dangerous will only get louder and stronger.

Liz Cheney: (12:46)
When you look at the spread of these mistruths and the spread of the disinformation, silence enables it. Silence enables the liar. Silence helps it to spread. The first thing you have to do is say, “No, I’m not going to accept that we’re going to live in a post-truth world.” It’s a toxin, Lesley, in our political bloodstream, because when we allow that to continue to go on in the face of rulings of the courts, in the face of recounts, in the face of everything that’s gone on to demonstrate that there was not fraud that would have changed the outcome, then we all, if we do that, we are contributing to the undermining of our system. It’s a really serious and dangerous moment because of that.