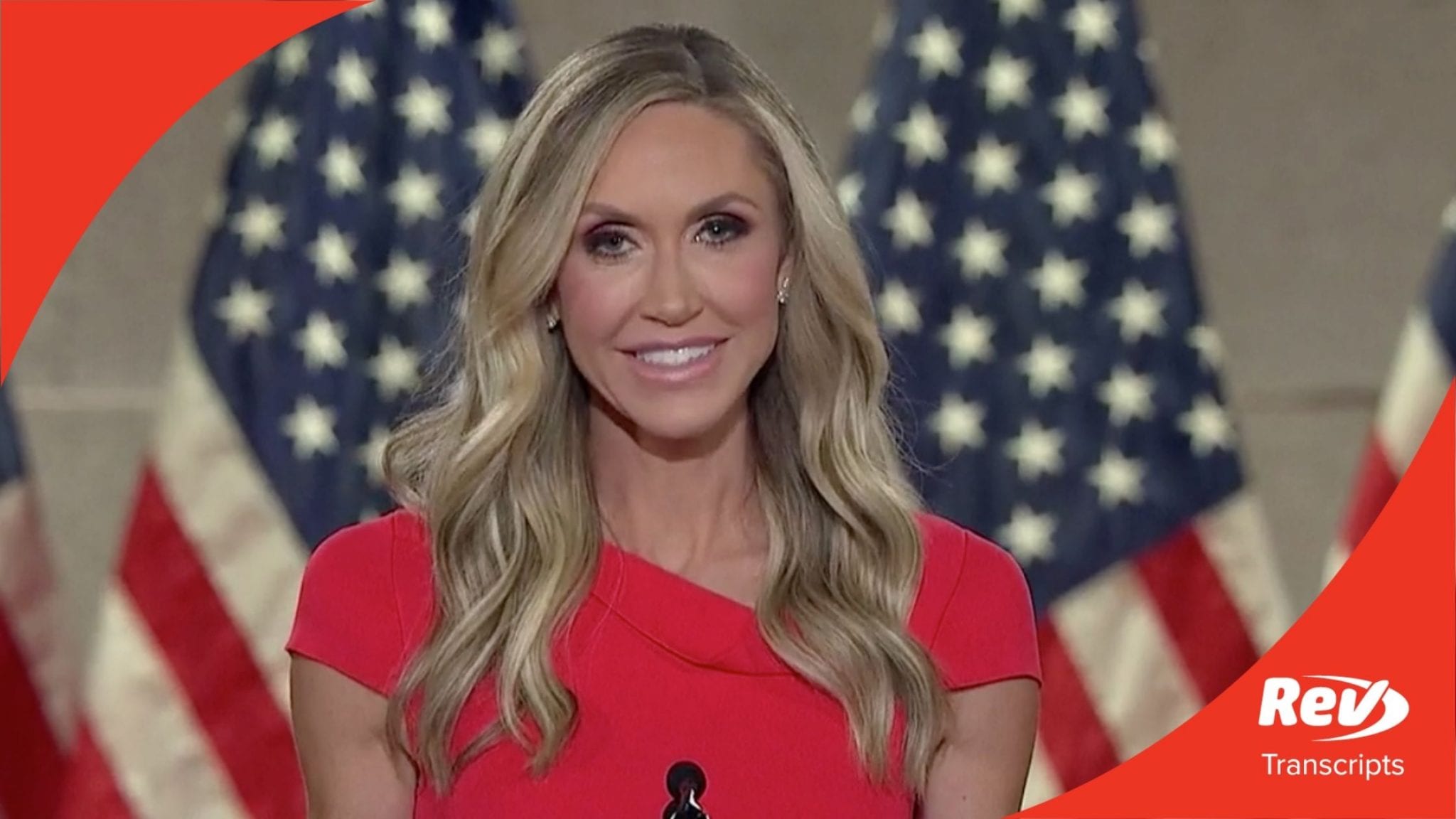 Lara Trump: (00:00)
… of Bob and Linda [inaudible 00:00:01], sister to Kyle, mother to Luke and Carolina, and the daughter-in-law of our 45th president, Donald J. Trump. But tonight I come to you simply as an American. My life began like many in our country. I grew up in Wrightsville Beach, North Carolina. My parents were small business owners and worked hard to make sure that my brother and I had everything we needed, but not everything we wanted. My parents raised me to believe that in America, I could achieve anything with hard work and determination. That the opportunities available to me were limited only by the size of my ambition, that I should dream big, and I did. Those very dreams are what led me to New York City. I’d heard the adage, if I can make it there, I can make it anywhere, and I intended to do just that.

Lara Trump: (00:53)
Never in a million years did I think that I would be on this stage tonight, and I certainly never thought that I’d end up with the last name, Trump. My seventh grade English teacher, Mrs. Bee, used to tell us, believe none of what you hear, half of what you read, and only what you’re there to witness firsthand. The meaning of those words never fully weighed on me until I met my husband and the Trump family. Any preconceived notion I had of this family disappeared immediately. They were warm and caring. They were hard workers and they were down to earth. They reminded me of my own family. They made me feel like I was home. Walking the halls of the Trump organization, I saw the same family environment. I also saw the countless women executives who thrived there year after year.

Lara Trump: (01:43)
Gender didn’t matter, what mattered was the ability to get the job done. I learned this directly when in 2016, my father-in-law asked me to help him win my cherished home state and my daughter’s namesake, North Carolina. Though I had no political experience, he believed in me. He knew I was capable, even if I didn’t. So it didn’t surprise me when president Donald Trump appointed so many women to senior level positions in his administration. Secretary of the United Nations, secretary of the Air Force, the first female CIA director, the first black female director of the Fish and Wildlife Service, and countless ambassadors just to name a few. Under president Trump’s leadership, women’s unemployment hit the lowest level since World War II. 4.3 million new jobs have been created for women. In 2019 alone, women took over 70% of all new jobs.

Lara Trump: (02:42)
Female small business ownership remains at an all time high and 600,000 women have been lifted out of poverty all since president Trump took office. He didn’t do these things to gain a vote or check a box, he did them because they’re the right things to do. 100 years ago today, the 19th amendment was ratified granting the right to vote to every American woman. And since that day, incredible strides have been made by women in America. From Amelia Earhart to Rosa Parks and Sally Ride, women shaped our history and are part of what has made our country the most exceptional nation in the world. I often think back to my 24 year old self driving alone in my car from North Carolina to New York City. And I think about what I tell myself now, as we head towards the most critical election in modern history.

Lara Trump: (03:37)
This is not just a choice between Republican and Democrat or left and right, this is an election that will decide if we keep America America, or if we head down an uncharted frightening path towards socialism. Abraham Lincoln once famously said, America will never be destroyed from the outside. If we falter and lose our freedoms, it will be because we destroyed ourselves. While those words were spoken over 150 years ago, never have they been more relevant. Will we choose the right path and maintain the unique freedoms and boundless opportunities that make this country the greatest in the history of the world? Will we remain the beacon of hope for those around the world fighting oppression, communism, and tyranny? The choice is ours. I know the promise of America because I’ve lived it, not just as a member of the Trump family, but as a woman who knows what it’s like to work in blue collar jobs, to serve customers for tips, and to aspire to rise.

Lara Trump: (05:41)
If you’re watching tonight and wrestling with your vote on November 3rd, I implore you, tune out the distorted news and biased commentary and hear it straight from someone who knows. I wasn’t born a Trump, I’m from the South. I was raised a Carolina girl. I went to public schools and worked my way through a state university, Mrs. Bee from my seventh grade English class was right. What I learned about our president is different than what you might have heard. I learned that he’s a good man, that he loves his family, that he didn’t need this job that no one on earth works harder for the American people that he’s willing to fight for his beliefs and for the people and the country that he loves.

Lara Trump: (06:27)
He is a person of conviction. He is a fighter and will never stop fighting for America. He will uphold our values. He will preserve our families and he will build upon the great American edict that our union will never be perfect until opportunity is equal for all, including and especially for women. Our 40th president, Ronald Reagan, said it best. The dreams of people may differ, but everybody wants their dreams to come true and America above all places gives us the freedom to do that. It’s up to us to keep this country a place where no dream is out of reach for our children and generations beyond. To my father-in-law, thank you for believing in me. Thank you for bravely leading this country and thank you for continuing to fight every day for America. May God bless and protect the Gulf states in the path of the hurricane. May God bless our troops and may God continue to bless this incredible country.