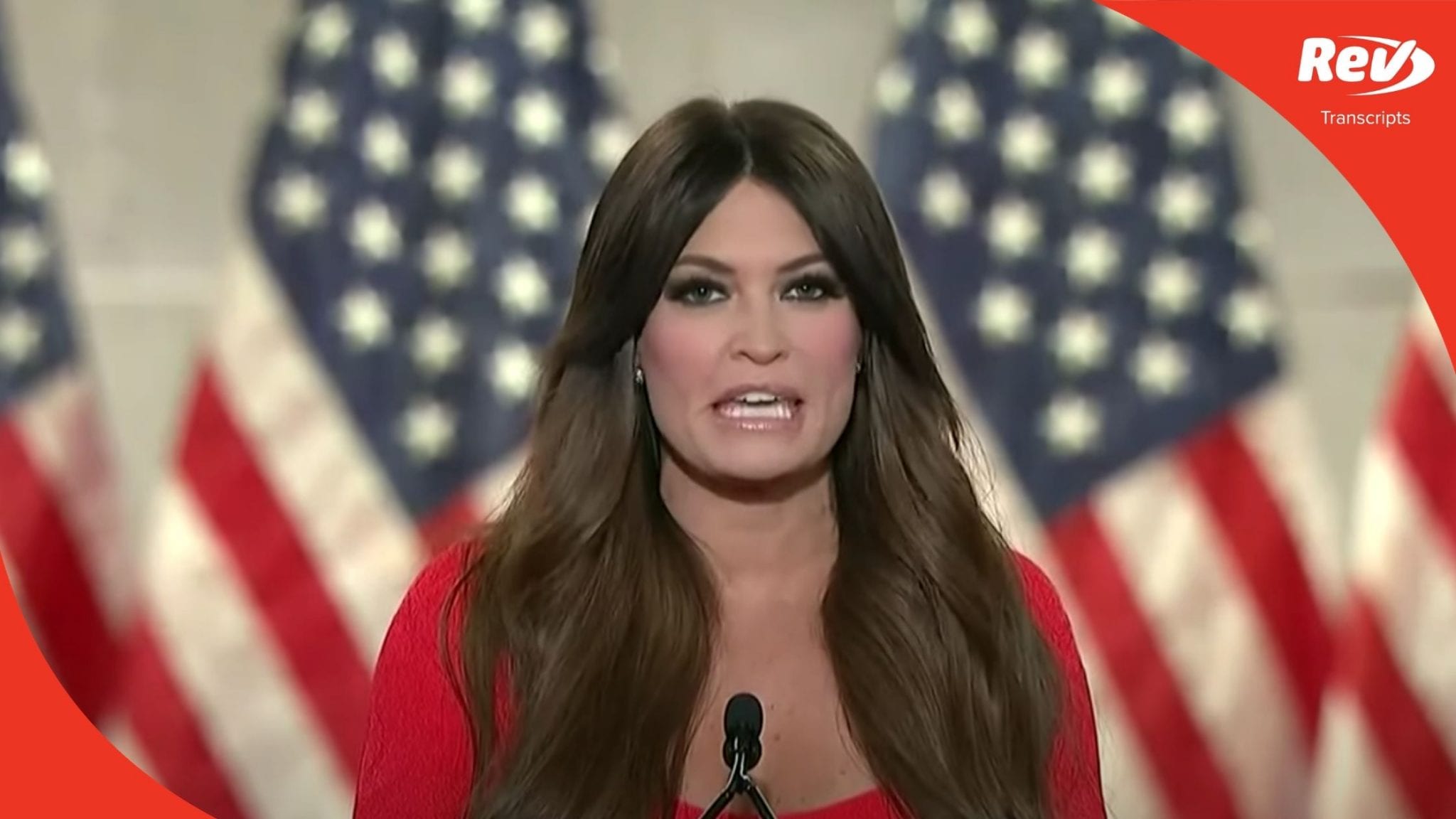 Attorney and girlfriend of Donald Trump, Jr. Kimberly Guilfoyle gave a speech at the 2020 Republican National Convention on August 24, 2020. Read the full transcript of her speech here.

Kimberly Guilfoyle: (00:05)
Good evening, America. I’m Kimberly Guilfoyle. I speak to you tonight as a mother, a former prosecutor, a Latina, and a proud American, and yes, a proud supporter of President Donald J. Trump. Why? He is the President who delivers for America. He built the greatest economy the world has ever known, for the strivers, the working class, and middle class. As Commander in Chief, he always puts America first. President Trump is the law and order President.

Kimberly Guilfoyle: (00:41)
Now, Presidential leadership is not guaranteed. It is a choice. Biden, Harris, and the rest of the Socialists will fundamentally change this nation. They want open borders, closed schools, dangerous amnesty, and will selfishly send your jobs back to China while they get rich. They will defund, dismantle, and destroy America’s law enforcement. When you are in trouble and need police, don’t count on the Democrats.

Kimberly Guilfoyle: (01:14)
As a first-generation American, I know how dangerous their Socialist agenda is. My mother, Mercedes, was a special education teacher from Aguadilla, Puerto Rico. My father, also an immigrant, came to this nation in pursuit of the American Dream. Now, I consider it my duty to fight to protect that dream. Rioters must not be allowed to destroy our cities. Human sex drug traffickers should not be allowed to cross our border. The same Socialist policies which destroyed places like Cuba and Venezuela must not take root in our cities and our schools.

Kimberly Guilfoyle: (01:58)
If you want to see the Socialist Biden/Harris future for our country, just take a look at California. It is a place of immense wealth, immeasurable innovation, and immaculate environment, and the Democrats turned it into a land of discarded heroin needles in parks, riots in streets, and blackouts in homes. In President Trump’s America, we light things up. We don’t dim them down. We build things up, we don’t burn them down. We kneel in prayer and we stand for our flag.

Kimberly Guilfoyle: (02:42)
This election is a battle for the soul of America. Your choice is clear. Do you support the cancel culture? The cosmopolitan elites of Nancy Pelosi, Chuck Schumer, and Joe Biden, who blame America first? Do you think America is to blame? Or, do you believe in American greatness? Believe in yourself? In President Trump? In individual and personal responsibility? They want to destroy this country and everything that we have fought for and hold dear. They want to steal your liberty, your freedom. They want to control what you see and think and believe so that they can control how you live. They want to enslave you to the weak, dependent, liberal victim ideology to the point that you will not recognize this country or yourself.

Kimberly Guilfoyle: (03:44)
From the beginning, when President Trump spoke about making American Great Again, he was speaking about that shining city on a hill and restoring the beacon of light that once shined so bright. His promise was to put America first and he has. When President Trump cut middle class taxes, putting tens of thousands of dollars back in the pockets of working class Americans, that beacon began to flicker once again. When President Trump commanded the defeat of ISIS, took out al-Baghdadi and Soleimani and paved the way for peace in the Middle East, that beacon started to glow. When he negotiated historic trade deals with Canada, Mexico, Japan, and China, bringing back thousands of manufacturing jobs to America, that beacon shined bright once again for the world to see.

Kimberly Guilfoyle: (04:45)
America, it’s all on the line. President Trump believes in you. He emancipates and lifts you up to live your American Dream. You are capable. You are qualified. You are powerful and you have the ability to choose your life and determine your destiny. Don’t let the Democrats take you for granted. Don’t let them step on you. Don’t let them destroy your families, your lives, and your future. Don’t let them kill future generations because they told you and brainwashed you and fed you lies that you weren’t good enough.

Kimberly Guilfoyle: (05:25)
Like my parents, you can achieve your American Dream. You can be that shining example to the world. Manifest and be the change in this country that you dream, that you hope, that you believe in. Stand for an American President who is fearless, who believes in you, and who loves this country and will fight for her. President Trump is the leader who will rebuild the promise of America and ensure that every citizen can realize their American Dream. Ladies and gentlemen, leaders and fighters for freedom and liberty and the American Dream, the best is yet to come!