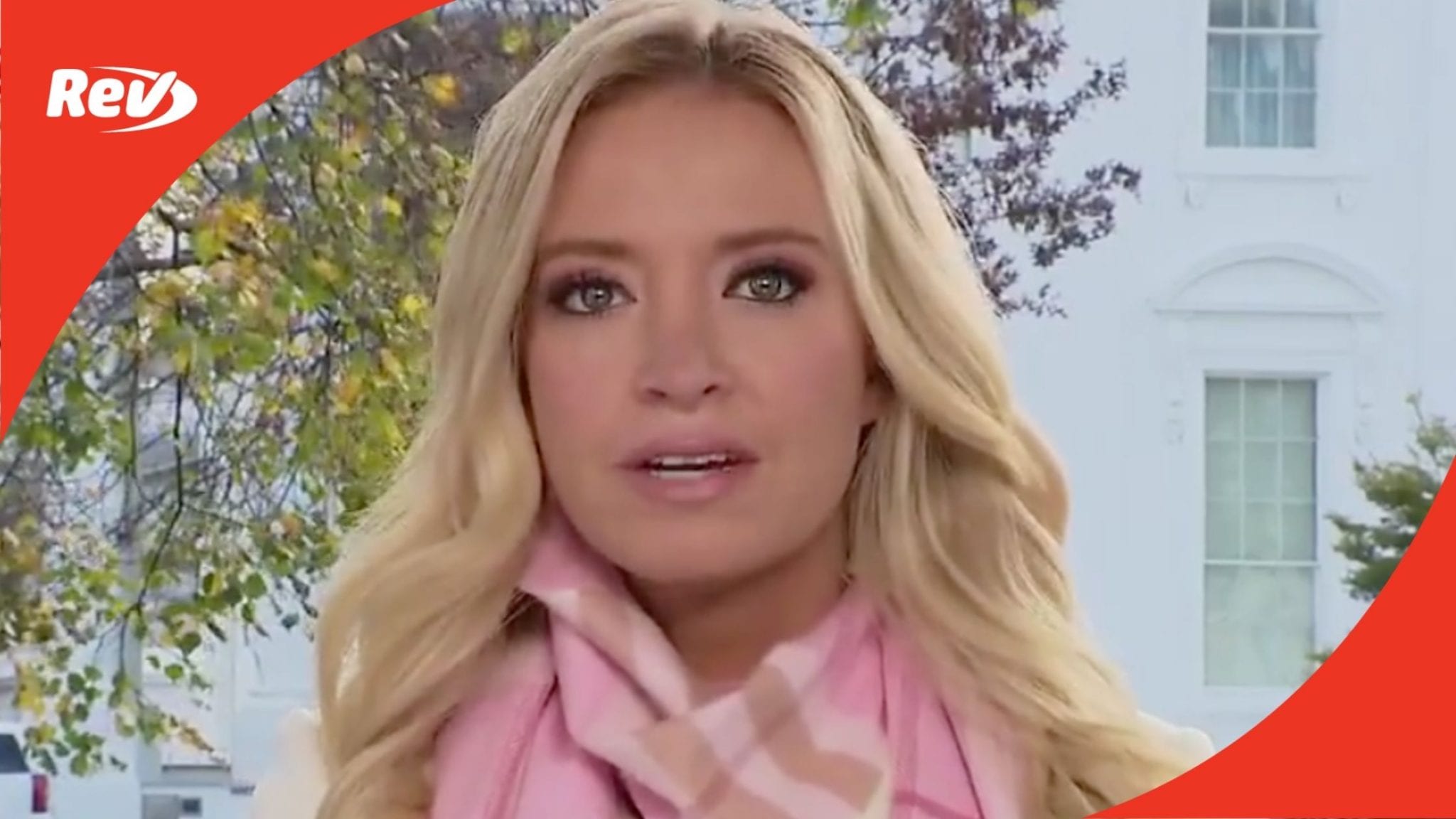 White House Press Secretary Kayleigh McEnany was interviewed on Fox & Friends on November 18. She discussed the Trump Campaign’s claims of election fraud, and called some coronavirus restrictions “Orwellian.” Read the transcript of the interview with her remarks here.

Kayleigh McEnany: (00:00)
Yeah, the president has pointed out that he made an inaccurate statement. He actually made a few if you look at his Twitter feed but look, if you say that this was the most secure election in American history as the president rightly pointed out that may be true from a standpoint of foreign interference but you just heard Griff Jenkins say there were three tranches of ballots uncounted that were found in Georgia amounting to nearly 6,000 votes. You have 234 pages of sworn affidavits in Michigan in one county alone alleging egregious misconduct by poll workers pushing back observers and even allegations of fraud in there. We have real questions in Pennsylvania so to come out and say it’s the most secure election in American history, that’s just not an accurate statement and it seems like a partisan attempt to just hit back at the president as he pursues important litigation.

Speaker 2: (00:47)
So you think that Krebs had a political agenda there? He was trying to take a shot at the president by saying something that he couldn’t possibly have proven?

Kayleigh McEnany: (00:54)
I don’t know if it was a partisan agenda, a personal grievance, what it was, but it definitely seemed to be animated by something and it seemed to go directly at this president and legitimate claims that he is pursuing in court.

Kayleigh McEnany: (01:11)
Yeah, well look down in Georgia. We have one recount going on right now. Just one, there are others that may or may not happen but there’s one going on in and you’ve found nearly 6,000 ballots not counted. Just yesterday we heard about a California man who planned to cast 8,000 votes in the name of deceased people and others that L.A. is now looking at and there’s a good article on the L.A. Times about that so maybe he should look around at just public news information that’s out there and he can find all the evidence he needs but there are real questions that need to be asked because we need integrity in our election system.

Speaker 4: (01:45)
If the president doesn’t win and Joe Biden is … It’s proven that he is the elected president, what happens with the transfer of power? Will it be peaceful?

Kayleigh McEnany: (01:55)
Look, this president has always said he will engage in a peaceful transfer of power if the facts bear out that way but the president believes that, so too do many others that if every legal vote is counted, he will remain president. He is pursuing litigation but this president always wants what is in the best interest of our country.

Speaker 2: (02:12)
Kind of interesting, I hear them [inaudible 00:02:15] taking care of the grounds while you’re out there. I admire your focus Kayleigh, it’s getting a little bit challenging. So we understand that the Biden team is getting concerned because they want to be able to coordinate on the coronavirus as well as intelligence issues. Do you think even if the president is up finding votes that gets him the victory it would hurt just to read the Biden people in, just so months down the line if Joe Biden becomes president, he won’t be able to say, “Hey, those months, if I only had those months back, we wouldn’t have had these negative things happen?”

Kayleigh McEnany: (02:46)
Well a few things. One, the administration is doing everything statutorily required for a transition. It is up to the GSA to what we call reach ascertainment for an election. They’re independent of us and they haven’t declared that just yet. The former vice president receives an intelligence briefing. He does get that, he’s been getting that for months and I’d say this with respect to COVID. What this president has done, a vaccine in record time, ready to be manufactured, already manufactured, but ready to be distributed, a taskforce that’s done an excellent job, a stockpile that was left empty by Obama-Biden that he’s filled up since then. He’s left an infrastructure in place where COVID can be handled and we believe that we will do so going forward in a second Trump administration.

Speaker 3: (03:31)
All right, and the news this morning, I don’t know if you’ve heard about it an hour ago but Pfizer has said that apparently their vaccine is 95% effective which joins Moderna which is terrific so we all want … A lot of people want to get I think the latest public opinion poll was at least 60% of the people out there want to get that as soon as possible, but we know all across the country Kayleigh, cases are spiking unfortunately and this is the week before Thanksgiving when families are going to be together and there are a number of governors who are suggesting, “Look, you don’t need to be in a big group, particularly with people are outside your bubble.” What do you think of these suggestions and guidelines some of the governors had given in advance of this because it is a super contagious disease?

Kayleigh McEnany: (04:24)
Yeah, I think a lot of the guidelines you’re seeing are Orwellian. Let me start by saying the CDC has put out considerations as we prepare to go about Thanksgiving about socially distancing, wearing masks, doing what you can and there’s a whole list, a page of very good considerations and in that they say we’re not recommending a certain number of people but we are giving considerations that you should put in place and I think that’s the American way. The American people know how to protect their health. We’ve dealt with COVID for many months but it’s Orwellian in a place like Oregon to say if you gather in numbers more than six, we might come to your house and arrest you and you get 30 days of jail time? That’s not the American way. We don’t lose our freedom in this country. We make responsible health decisions as individuals.