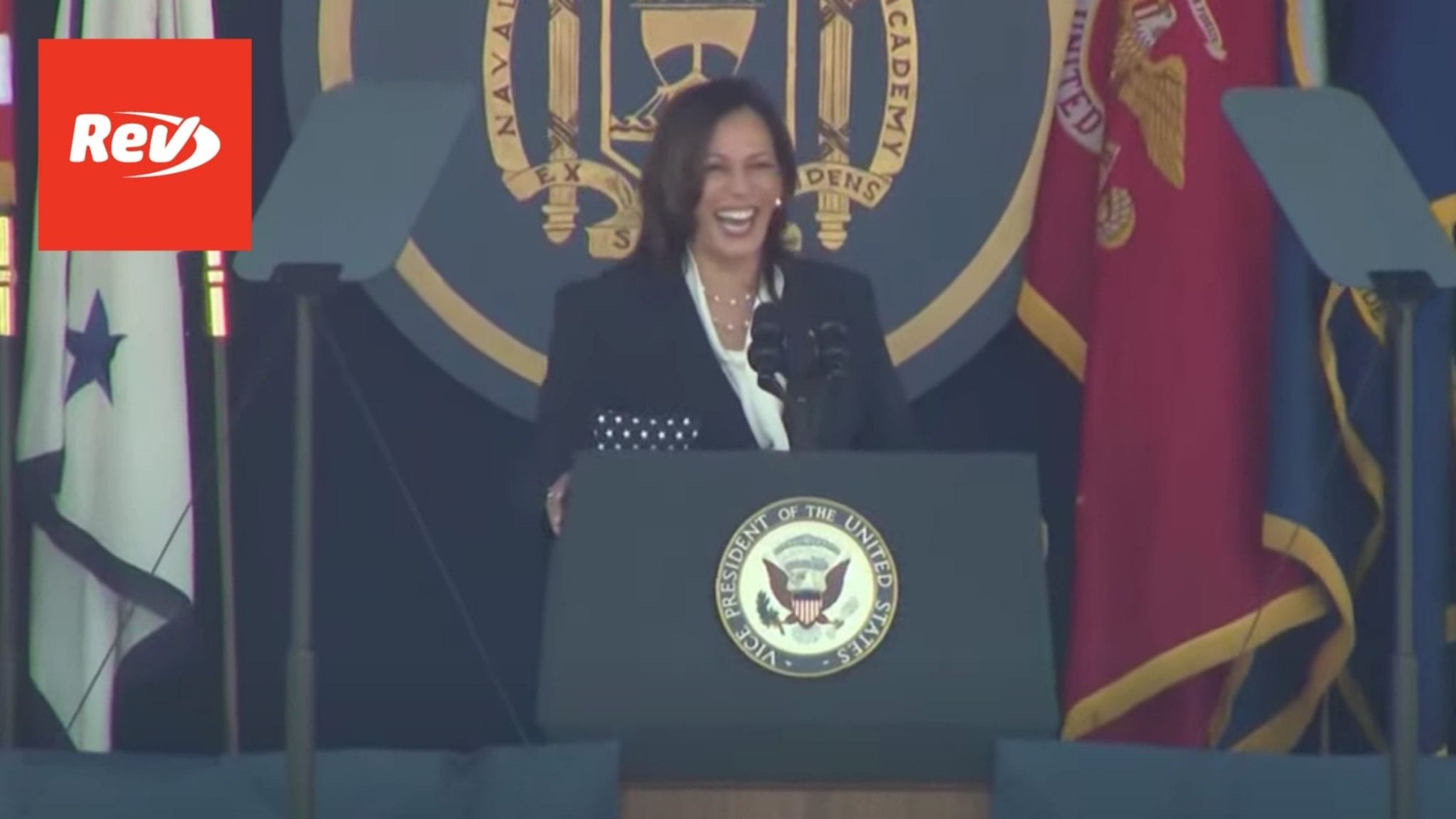 Vice President Kamala Harris delivered the commencement address for the 2021 U.S. Naval Academy graduating class on May 28, 2021. She was the first woman to deliver a commencement speech to the Naval Academy. Read the transcript of her speech remarks here.

Speaker 1: (00:01)
Ladies and gentlemen, the 49th Vice President of the United States, the Honorable Kamala Harris.

Vice President Kamala Harris: (00:25)
Acting Secretary Thomas Harker, General David Berger, Admiral Mike Gilday, looking out at these midshipmen, I know we are all filled with pride. Vice Admiral Sean Buck, Captain TR Buchanan, faculty and staff, thank you for educating such a fine crew. Alumni, thank you for the support you have shown over these years to this great institution. And to my military aid, Lieutenant Colonel Frank Machniak, who graduated in 2004, I’m very proud to have you with me here today.

Vice President Kamala Harris: (01:14)
Family and friends of these graduates, thank you for the sacrifices you have already made and will make.

Vice President Kamala Harris: (01:26)
And I also want to acknowledge Kim and John Johnson. Your son was taken far too soon and I promise you that he will not be forgotten.

Vice President Kamala Harris: (01:57)
And look how far you’ve come. So you endured 05:30 PT and PRONO exams. You excelled on athletic fields and in academic exercises. You enjoyed the fair at Dillows. I know. Karaoke at Harvest. You guys rolled up your sleeves and you got vaccinated and you made it to this day. You made it to this day.

Vice President Kamala Harris: (02:45)
And this day, this day that is not only a commencement, this day that is a commissioning. And in a few minutes, you will take an oath. And it’s actually the same oath I took as Vice President, an oath to support our Constitution and defend it against all enemies, an oath that has its roots in the founding of our nation. And no matter what changes in our world, the charge in this oath is constant.

Vice President Kamala Harris: (03:35)
Remember that as you walk out into the world, because the world you all are walking into is rapidly changing. In fact, we are at a significant turning point. Just look at the last several months and you know what I’m talking about. And look at several moments in our nation’s history for perspective.

Vice President Kamala Harris: (04:45)
At some of these critical moments, our nation was compelled to take a hard look at both our priorities and our preparedness.

Vice President Kamala Harris: (05:00)
And another turning point was September 11th, 20 years ago this year, when airplanes hit the twin towers and our Pentagon, when Flight 93 crashed in Pennsylvania. That day shaped your entire life and it shaped our entire nation. It tested our systems, our structures, our very standing in the world.

Vice President Kamala Harris: (05:37)
Well, midshipmen, we are now entering the next era, a new age, a new epoch with its own tests, with its own challenges, and with its own opportunities.

Vice President Kamala Harris: (06:41)
Just think, a deadly pandemic can spread throughout the globe in just a matter of months, a gang of hackers can disrupt the fuel supply of a whole seaboard. One country’s carbon emissions can threaten the sustainability of the whole earth. This, midshipmen, is the era we are in and it is unlike any era that came before.

Vice President Kamala Harris: (07:19)
So the challenge now, the challenge before us now is how to mount a modern defense to these modern threats.

Vice President Kamala Harris: (07:31)
So let me share with you, for example, a personal experience. A few years ago when I was in the United States Senate, I visited the USS Scranton. It was outside of San Diego, California. And at the time, I was also a member of the Senate Intelligence Committee. So when I was aboard the vessel, I asked the officers, I said, “Hey, tell me, what does it take to protect such a valuable asset against cyber attacks?” And they told me, “You know, it’s pretty simple, equipment and experts.”

Vice President Kamala Harris: (08:10)
Well, the way I see it, midshipmen, you, you, you are those experts on the issue of cybersecurity. Foreign adversaries have their sights set on our military technology, our intellectual property, our elections, our critical infrastructure. The ransomware attack by criminal hackers earlier this month, well, that was a warning shot. In fact, there have been many warning shots.

Vice President Kamala Harris: (09:30)
And just think, from walkie talkies to the internet, to satellite navigation, the United States military has been on the forefront of research, development and technological advancement. That is a point of American pride. And as I look out at all of you, I know you will build on that leadership.

Vice President Kamala Harris: (11:01)
And just ask any Marine today, would she rather carry 20 pounds of batteries or a rolled up solar panel, and I am positive she will tell you a solar panel, and so would he.

Vice President Kamala Harris: (11:31)
The American people are depending on you, the best, the bravest, the most brilliant. We saw this during COVID-19 when Americans watched how members of our military helped vaccinate our nation, because you know biological threats like pandemics and infectious diseases are yet another threat in this era. And you are confronting this threat. Our military helped develop the technology that made the vaccine possible. Naval researchers also figured out how to use 3D knitting machines to make masks. Naval labs monitored the spread of the disease. And the Marine Corps and the Navy are leading on making the connection between the pandemic and medical readiness of our fighting forces for the future.

Vice President Kamala Harris: (13:19)
So as I conclude today, that’s what I want to talk about. I want to talk about you. As Vice President, I’ve come to know the United States Navy quite well. Every day, in fact, I’m surrounded by sailors and Marines and your tradition and your history. And I mean that literally. So I often travel on Marine Two. In fact, that’s how I arrived today. My residence is on the grounds of the United States Naval Observatory. My west wing office features a desk built by [inaudible 00:13:55] from timbers of the USS Constitution. My ceremonial office was once occupied by the Secretary of the Navy, and displayed there, I have placed the shoulder boards of your brigade commander, Midshipman Sydney Barber.

Vice President Kamala Harris: (14:18)
And so here’s what I know. Midshipmen, you are tireless. You are ambitious. You are a fierce fighting force. You are idealists in the truest sense. You are the embodiment of American aspiration. So hold on to that, because in your career, you may witness some of the worst of humanity, but promise that you will never forget the best of who we are, that you will never forget the ideals you stand for, duty, honor, loyalty.

Vice President Kamala Harris: (15:32)
Fight for those ideals and fight for our democracy. And remember, our Constitution is not only something to defend, it is a guide. It is a guide for your service. It begins with three simple words, We the People, not I, we. Our nation was designed to be a team sport and we are in this together.

Vice President Kamala Harris: (16:11)
So finally, I’ll just share with you on my way to the stadium this morning, I stopped by the cemetery to pay my respects to my dear former colleague, a great and courageous American, Senator John McCain. Yes. So most people don’t know he wanted to be buried next to his best friend who he met on the yard, Admiral Chuck Larson. That is the ultimate example of what I mean, in it together.

Vice President Kamala Harris: (17:25)
And so, midshipmen, when you stand to take the oath, I want you to know that as we embark on this new era, President Joe Biden and I, our entire nation have great faith in you and we are proud of you, so very, very proud.

Vice President Kamala Harris: (17:55)
Congratulations again. May God bless you and may God bless the United States of America. Thank you.

Speaker 3: (18:03)
Again, everybody, that was Vice President Kamala Harris making history today by being the first woman to deliver the commencement speech in the Naval Academy’s 175-