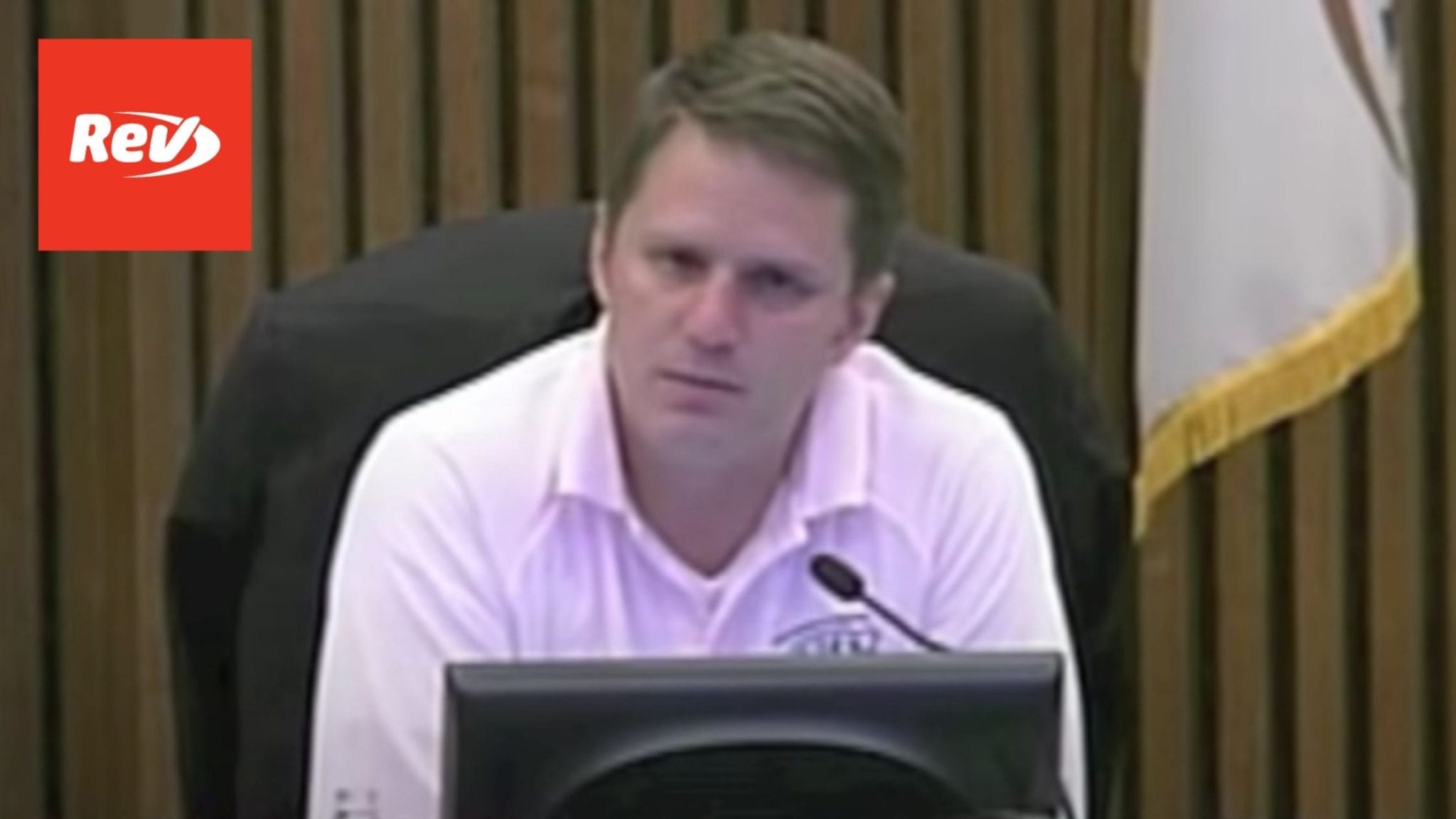 Fort Worth City Councilman Joel Burns spoke about his experience with anti-gay bullying and shared a message of hope on October 13, 2010. Read the transcript of his speech remarks here.

Joel Burns: (00:15)
Yes, sir. Mayor, as you know, we’re gathered here today in our pink shirts to bring awareness to the fight against breast cancer here in Fort worth and across the globe. But tonight, I ask my colleagues indulgence and allowing me to use my announcement time to talk briefly about another issue that pulls at my heart. Ron, would you go ahead and run the…

Joel Burns: (00:37)
The parents of Asher Brown, who you can see above, complained to school officials in the Cypress-Fairbanks ISD outside of Houston, that their son was being bullied and harassed in school. The bullies called him faggot and queer. They shoved him, they punched him. And in spite of his parents calls to counselors and principals, the harassment, intimidation, and threats continued. For years it continued. A couple of weeks ago, after being bullied at school, Asher went home, found his father’s gun and shot himself in the head. His father found Asher dead when he came home from work. Asher was 13 years old.

Joel Burns: (01:17)
I’d like for you to look at his face. Unlike Asher, Indiana teen, Billy Lucas, never self identified as gay, but was perceived to be by bullies who harassed him daily at the Greensburg Community High School. Three weeks ago, he hung himself in his grandparents barn. He was 15 years old.

Joel Burns: (01:40)
Minnesota 15 year old, Justin Aaberg, came out to friends at age 13 after which the harassment and bullying began. It grew as he moved from middle school to high school. When he found the harassment more than he could bear, he hung himself in his room and was found by his mother.

Joel Burns: (01:57)
Classmates started teasing and name calling Seth Walsh in the fourth grade. It continued through his middle school years where other students told him the world didn’t need another queer, and that he should, “Go hang himself.” On September 18th, after being threatened by a group of older teens, he went home, through a noose around a tree branch, and he did just that. He hung himself in his backyard. His mother saw him, pulled him down. Seth survived on loss support for nine days before dying a couple of weeks ago. He was 13 years old.

Joel Burns: (02:39)
Teen bullying and suicide has reached an epidemic in our country, especially among gay and lesbian youth, those perceived to be gay, or kids who are just different. In recent weeks, New Jersey teen, Tyler Clementi, jumped off a bridge to his death after his roommate outed him on the internet. Rhode Island teen, Raymond Chase, hung himself in his dorm room. And we learned just yesterday of Oklahoma teen, Zach Harrington, who killed himself after attending a city council meeting in Norman, Oklahoma, where speakers may disparaging anti-gay remarks.

Joel Burns: (03:16)
There is a conversation for the adults in this room and those watching to have, and we will have it. That this bullying and harassment in our schools must stop, and that our schools must be a safe place to learn and to grow. It is never acceptable for us to be the cause of any child to feel unloved or worthless, and I’m committed to being a part of that conversation.

Joel Burns: (03:41)
But tonight, I would like to talk to the 12, 13, 14, 15, 16, and 17 year olds at Paschal and at Arlington Heights and at Trimble Tech high schools, or at Daggett and Rosemont middle schools, or any school in Fort worth, or anywhere across the country for that matter. I know that life can seem unbearable. I know that the people in your household or in your school may not understand you, and that they may even physically harm you. But I want you to know that it gets better.

Joel Burns: (04:23)
When I was 13, I was a skinny, lanky, awkward teen who had grown too tall, too fast, who would stumble over my own feet. I was the son of a Methodist church pianist named Jeanette, and a cowboy named fittingly, Butch in Crowley, Texas. As their son, and as a kid in a small town, there was a certain image of who I thought I was supposed to be. But as I entered adolescence, I started having feelings that I didn’t understand and couldn’t explain, but I knew they didn’t mesh with the image of what I thought I was supposed to be. I was a sensitive kid, but friendly. I was a band dork. I played basketball, but not very well. I was teased like all kids, but I was fairly confident and I didn’t let it bother me much.

Joel Burns: (05:12)
One day when I was in the ninth grade, just starting Crowley High School, I was cornered after school by some older kids who roughed me up. They said that I was a faggot and that I should die and go to hell where I belonged. That erupted the fear that I had kept pushed down, that what I was beginning to feel on the inside must somehow be showing on the outside. Ashamed, humiliated and confused, I went home. There must be something very wrong with me, I thought. Something I could never let my family or anyone else know.

Joel Burns: (05:58)
I think I’m going to have too hard a time with the next couple of sentences that I wrote. And also, I don’t want my mother and father to bear the pain of having hear me say them.

Joel Burns: (06:20)
So I will just say, and I’ll skip ahead, I’ve never told this story to anyone before tonight. Not my family, not my husband, not anyone. But the numerous suicides in recent days have upset me so much, and it’s just torn at my heart. Even though there may be some political repercussions for telling my story, this story is not just for the adults who much choose or not choose to support me. This story is for the young people who might be holding that gun tonight, or the rope, or the pill bottle. You need to know that the story doesn’t end where I didn’t tell it, on that unfortunate day. There’s so, so, so much more.

Joel Burns: (07:12)
Yes, high school was difficult. Coming out was painful. But life got so much better for me. And I want to tell any teen who might see this, give yourself a chance to see just how much better life will get. And it will get better. You will get out of the household that doesn’t accept you. You will get out of that high school and you never have to deal with those jerks again if you don’t want to. You will find, and you will make, new friends who will understand you and life will get so, so, so much better.

Joel Burns: (07:53)
I look back and my life is full of so many happy memories that I wish I could share with those whose photos were shown up above earlier and those who have taken their lives. Memories that I wish I could share with a 13 year old version of me on that very unfortunate day. If I could, I would take the 13 year old me by the hand and take him to the campaign office in 1992 of then Governor Clinton, where for a very speechless moment, my now partner, JD Angle, and I saw each other for the first time.

Joel Burns: (08:28)
I would take that 13 year old me to the first day of spring in 1999 on a west Texas ranch hilltop, surrounded by a dozen head of black Angus cattle who thought we were there to feed. And as the sun set, turning the sky pink and purple and orange in a way that only a West Texas sunset can, I jabbed my hands into my jeans pocket and pulled out two rings that I had literally spent my last dollar on, and slipped one onto JD’s hand and asked him to spend the rest of his life with me.

Joel Burns: (09:01)
I would take the 13 year old Joel to election night in 2007, in a room filled with countless family and friends erupting and cheers when it became clear that I would win my first election, so that they could see the love and support for me that was in the room that night.

Joel Burns: (09:23)
I would take the 13 year old me to just a few days ago at Baylor Hospital to see our dad. Our dad, who’s no longer the 40 year old tough cowboy that he was when I was 13 who I thought would never understand me, but is now the 67 year old dad. Still a pretty tough cowboy who has grown older. And the 13 year old me would see me today holding my dad’s weathered hand and see my dad as he woke up from his operation, and him squeeze my hand and look up at me and say, “Joel, I’m so glad you’re here today.” And me say back to my dad, “I am too, Dad. I am too.”

Joel Burns: (10:34)
To those who are feeling very alone tonight, please know that I understand how you feel, but things will get easier. Please stick around to make those happy memories for yourself. It may not seem like it tonight, but they will. And the attitudes of society will change. Please live long enough to be there to see it.

Joel Burns: (11:04)
And to the adults, the bullying and the harassment has to stop. We cannot look aside as life after life is tragically lost. If you need resources, please check out thetrevorproject.org online, and you can call me and I will get you whatever resources you need. My number is (817) 392-8809.

Joel Burns: (11:32)
I want to thank those in this room for allowing me this time. And to JD and the rest of my family, I am sorry for you learning of this painful, personal story in this public life for the first time. But know that I’m able to tell it because of your love for me. And mom, dad, I’m alive today because you love me. Again, attitudes will change, life will get better and you will have a lifetime of happy memories if you just allow yourself and give yourself the time to make them. Thank you.