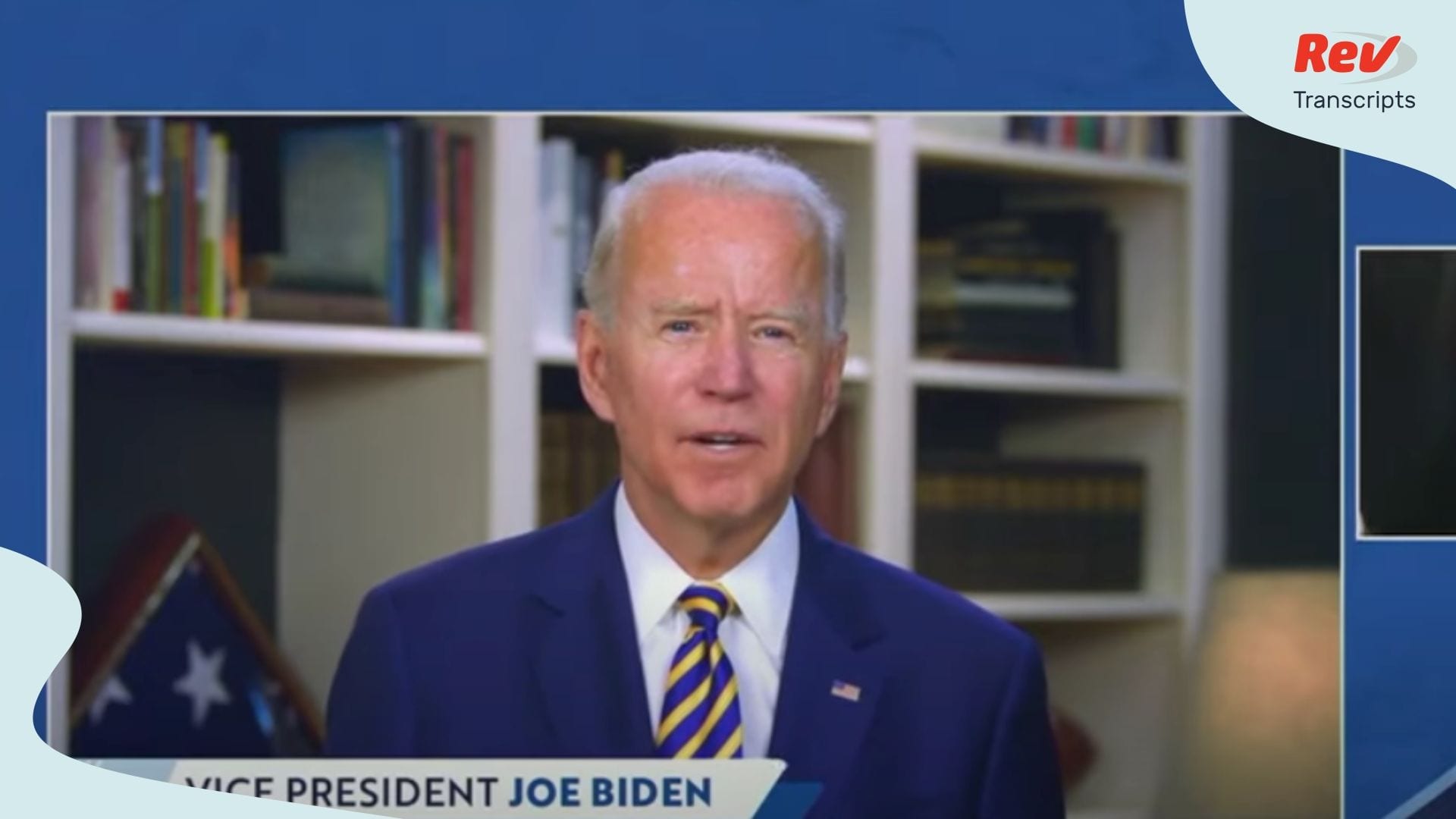 Joe Biden: (01:12)
Good morning. Today we learned the latest job numbers. Like every American I’m happy that millions of American workers are back on payrolls and this historic unemployment we still face has at least come down a bit more. This is a good day for every one of those individuals and their families who regained their security. But as happy as I was for millions of workers returning to their jobs, there is one number that I was stunned that the president didn’t mention even once in the process and the entire time he talked about it, the number was 50,000. Yesterday the number of new COVID-19 cases in America topped 50,000 in a single day. We’ve never hit that number before in the course of this virus. In 45 states, the seven day average of infections are higher than they were a week ago. In some places, hospital ICUs are at the near capacity, near breaking point. And we’re still seeing all across the country spikes in the virus that are causing many states to impose new restrictions again.

Joe Biden: (02:20)
To me and to many Americans this is very worrisome turn in the path and severity of the virus and the president didn’t even address it. Yesterday he reiterated his belief that the virus was going to disappear. Today he described what was happening as fires, quote, fires flaring up in the country. That’s just not an honest assessment of what’s happening. And it’s not just me saying that, the rest of the world knows that as well. Just this week, 27 European countries have banned Americans from traveling there because of the surging number of COVID-19 cases in the United States. The European Union says, “Don’t come.” They’re coming from a dangerous place for the virus.

Joe Biden: (03:08)
Until this president faces what’s going on in our country, our economy is going to remain at risk. Today’s report is positive news, and I’m thankful for it, for real, but make no mistake we’re still on a deep, deep job hole because Donald Trump has so badly bungled the response to coronavirus and now has basically given up on responding at all. You know a million more Americans would, millions of them would still have their job if Donald Trump had done his job and many of the jobs that have now come back should never have been lost in the first place. And for everyone whose job hasn’t come back, for everyone who doesn’t own stock, who can’t get the sweetheart loan through connections, does this feel like a victory? For parents are worried their kids can’t go back to school in the fall, do you feel like this is mission accomplished? Or for the people in states where COVID-19 is spiking and we’re seeing record high numbers of infections, do you feel like this crisis is under control? Of course not.

Joe Biden: (04:14)
People are scared. They’re worried about their families and about their future, but just like last month, President Trump has spiked the ball and made this about him. He doesn’t seem to realize he’s not even on the 50 yard line. Only one third of the jobs that were lost in March and April have now come back. Most of those jobs that returned were people on temporary furlough. That means these were the easiest jobs to get back as we reopen cities and states. It’s only going to get harder from here though. Permanent job lost numbers actually went up 588,000, almost 3 million permanently lost jobs.

Joe Biden: (05:00)
President Trump touted the job gains for African American workers, but unemployment for black men actually rose from 15.5% to 16.3% in June. He touted the numbers for Latino unemployment, but those numbers are still more than three times higher than they were before the crisis started. Look, let’s not lose sight of the critical point. This report measures job gains as of June the 12th, in the days since we’ve seen cases spiking around the country, some businesses closed down again, some states reimposing restrictions. And in the last two weeks, we’ve seen almost 3 million new unemployment filings and another 1.7 million people seeking pandemic unemployment insurance. There’s no victory to be celebrated. We should hope, but there’s no victory celebrate it.

Joe Biden: (05:57)
We’re still down nearly 15 million jobs and the pandemic is getting worse, not better. And it doesn’t have to. Millions of Americans are still out of work wondering when or if their job will come back or worried about how to pay the bills in the meantime. Trump wants to declare his health crisis over and unemployment solved. Unfortunately, he’s deadly wrong on both fronts. We’ve already at more than 128,000 dead. The number keeps climbing. That’s a direct consequence of Donald Trump’s bungled leadership and a total mismanagement of this crisis from the start. His failure to take quick action made this pandemic more costly for American people in every way, in lives lost, in economic impact and economic toll of those living with so much doubt and uncertainty.

Joe Biden: (06:49)
Now, as I said on Tuesday, he surrendered to this virus. Other countries have figured out how to get the virus under control and reopened their economies and put their people safely back to work. Other leaders didn’t waste time they were given from the start for stay at home orders. They got to work solving the root causes of this crisis, the coronavirus. Donald Trump just had given up. He’s not even trying to secure the public health anymore. He’d rather go back to the campaign rallies. He’s not interested in uniting us in this fight of a common threat we face. He’s decided he’s more, has more to gain by dividing this country for his own political purposes.

Joe Biden: (07:31)
Without a uniform plan and guidance from the federal government that state and local leaders can use to inform their reopening plans this is going to continue to be worse than it would have been otherwise. Recovery will be slower. Unemployment will stay higher than it should be. Has he even once expressed any real empathy for the families who’ve never again be whole because of this virus? Has he done anything, anything real to prioritize support for working Americans who need help now? Now.

Joe Biden: (08:06)
Democrats in Congress have put forward legislation to reward and protect our brave frontline workers. Helping working families find childcare, extend the supplemental unemployment benefits for people for the duration of the economic crisis. Meanwhile, the Republicans and President Trump are stalling on support for working families, even as they dole out taxpayer money to big corporations with zero accountability. Has Donald Trump even acknowledged the disproportionate impact this disease is having on black, brown and Native American communities, much less done anything to address those health disparities or underlying systemic racism has shapes them? You know the answer. Of course not.

Joe Biden: (08:52)
That’d require him to step up and lead. It would require him to put the American people ahead of his own interest. Didn’t have to be like this. America has more reported deaths and infections than anywhere else in the world. Our healthcare workers were still rationing personal protective equipment. They still don’t have sufficient testing to allow people to return to work with confidence. President Trump has turned wearing a mask into a political statement. And yesterday, yesterday he was once more claiming the coronavirus would quote, just disappear, I hope. Quote, just disappear I hope. That’s what he said. It’s like deja vu all over again. We’re months into this crisis and that’s still his best answer. Quit hoping for the best Mr. President. Quit claiming victory with almost 15 million un-Americans still out of work because of the crisis. Quit ignoring the reality this pandemic and the horrifying loss of American life. Act. Lead. Lead. Or get out of the way so others can Mr. President.

Joe Biden: (10:12)
God bless you all and may He protect you and may God protect our troops. Thank you.