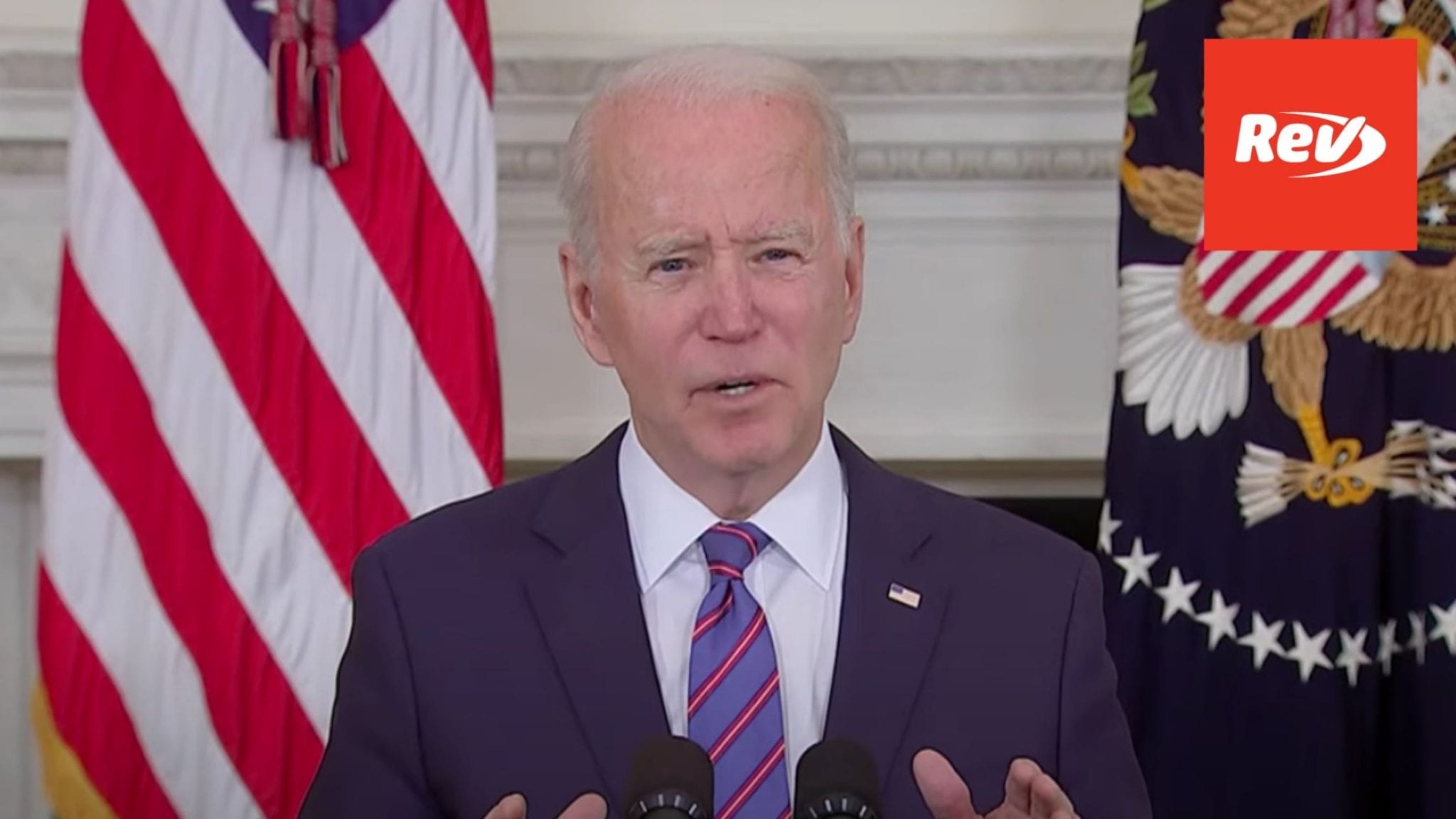 President Joe Biden spoke about the March jobs report on April 2, 2021. He announced that the US economy created 900,00o jobs in March. Read the transcript of his speech remarks here.

President Joe Biden: (00:05)
I’m looking forward to it. I’m looking forward to it. Well, good morning. This morning we’ve learned that our economy created 900,000 jobs in March. Means the first two months of our administration, I’ve seen more new jobs created in the first two months in any administration in history. But we still have a long way to go to get our economy back on track after the worst economic and job crisis in nearly a century. But my message to the American people is this help is here, opportunity is coming, and at long last there’s hope so for so many families credit for this progress belongs not to me, but to the American people. Hard working women and men who have struggled through this pandemic, never given up and are determined to get the country back on track as well as their families. But I think it’s also a reflection of two things we’re doing here.

President Joe Biden: (01:04)
First, the new economic strategy we’ve launched one focused on building from the bottom up and the middle out. And one that puts government on the side of working people and that rewards work, not wealth. When we invest in the American people, it’s not just those at the top that make our economy grow, they’re the ones that make it to grow, ordinary Americans. We saw the economy gain traction in March as the American Rescue Plan moved and got past bringing new hope to our country. And we’re going to continue to implement that law in the weeks ahead. By April 7th, next week, over 130 million households will have gotten their $1,400 per person rescue check. Funds are on their way to local communities to put educators, health care workers, home health care aides, police, firefighters, sanitary workers, back on the job. They’re getting more aid for small businesses. We’re also going to hang on open sign again on a door to rehire folks that had to be let go.

President Joe Biden: (02:13)
And in the months ahead, a new childcare tax credit will cut taxes and provide help to millions of families with young children. There’s nothing, nothing… I know you’re tired of hearing me say this, but I mean, there’s nothing the American people can not do if we give them a chance. And the American Rescue Plan does precisely that for hardworking middle-class folks at long last. Secondly, today’s report also reflects the progress we’ve made on my other key priority, getting the American people vaccinated. We’ve turned around a slow moving vaccination program into being the envy of the world. Yesterday, we set an all-time record for Thursday vaccinations and in a seven day period, that was the first ever where we administered 20 million shots in seven days. That’s 20 million shots in a week. No other country has come close to doing that. So we made significant progress on that front, but the fight’s far from over.

President Joe Biden: (03:18)
We know that vaccines are safe and effective. We’re vaccinating more people than any other country on earth. We also have progress on jobs and progress on vaccinations. But in the face of this great news, I need also to make this clear and direct statement to the American people. The progress we’ve worked so hard to achieve can be reversed. On the economic front, the benefits and the impact of the American Rescue Plan are temporary by design, it is a rescue plan. But as we get the economy back on his feet, we need to do the hard work of building back better not just for awhile, but for good, not just the short-term, but for good.

President Joe Biden: (04:07)
That’s why I proposed the American Jobs Plan on Wednesday in Pittsburgh. It’s an eight year program that invites… Let me put it another way. I’ve heard from everybody all across the country about the need for infrastructure. How many times have we heard this is infrastructure week of the last four years? About every second week was infrastructure week, but no infrastructure was built. Well, this an eight year program that invests in our roads, our bridges, broadband, airports, ports, and fixing our water systems. It’s going to repair our VA hospitals across the country. Many of them are more than 50 years old and are in real need of help. And we’ll invest in research and development to out-compete China and the rest of the world. Independent analysis shows that if we pass this plan, the economy will create 19 million jobs, good jobs, blue collar jobs, jobs that pay well.

President Joe Biden: (05:08)
That’s longterm jobs for pipe fitters, healthcare workers, those who work in the steel factories, and the cutting edge labs as well. The new report out this week shows that nearly 90% of the infrastructure jobs created in the American Jobs Plan can be filled by people who don’t have a college degree. 75% of those good paying jobs, don’t need a associate’s degree. It’s a blue collar blueprint for increasing the opportunity for people. This is an economic through those who’ve helped build the country and have been ignored and neglected for much too long by our government. It’s a once in a generation investment in our economic future, a chance to win the future, paid for by asking big corporations many of which do not pay any taxes all just to begin to pay their fair share. And it won’t raise a penny tax on a family making less than $400,000 a year, no federal tax, no addition.

President Joe Biden: (06:10)
When Congress comes back after this Easter break, I’m going to began meeting with Democrats, Republicans about this plan. I’ve spoken to Republicans on the phone. I’m going to be looking forward to meeting with them. They all have their ideas about what it will take, what they like, and what they don’t like. That’s a good thing. That’s the American way. Debate is welcome. Compromising is inevitable, changes in my plan are certain, but inaction is not an option. The American people have been promised action infrastructure for decades. They’ve been promised that after our leaders would take our country and make it more competitive for decades. I’ve made my plan to address this long overdue need, it is clear. Poll’s already show strong support for infrastructure investment from the American people whether they’re Democrats, Republicans, or Independents. Congress should debate my plan, change it and offer alternatives if they think that’s what they have to do but Congress should act.

President Joe Biden: (07:11)
Likewise on the virus. Our program, there too can be undone. As fast as we’re moving, more adults remain to be vaccinated in April, May, and June than have already been vaccinated in February and March. We’re not even halfway done yet. Too many Americans are acting as if this fight is over. It is not. I’ve told people that if my administration did the hard work of getting shots to all Americans in the next few months, if the American people continued to do their part mask up, practice social distancing, we could have a more normal July 4th. But this is still April, not July. We aren’t there yet. And so cases are going up again. The virus is spreading more rapidly in many places. Death’s are going up in some States. So I ask, I plead with you don’t give back the progress we’ve all fought so hard to achieve.

President Joe Biden: (08:14)
We need to finish this job. We need every American to buckle down and keep their guard up in this home stretch, wear your mask, keep safe distances from one another, wash your hands, get vaccinated when it’s your turn. That’s how we’re going to beat the virus. Cast off the weight of the pandemic that’s holding our economy back. Well, the earliest signs from this job report, this announcing today are promising and the American Rescue Plan is starting to make a real difference. Today’s report also reminds us how deep a whole we started in. After year of devastation, there are still 8.4 million fewer jobs today than there were last March, 8.4 million. We created 900,000 again, but 8.4 million jobs fewer today than last March. So too many Americans have been unemployed for longer than six months, too many women have been forced out of the workforce.

President Joe Biden: (09:21)
Unemployment among people of color remains far too high. Yes, we’ve made progress by starting to build an economy from the bottom up and the middle out. And yes, the American Rescue Plan is laying the foundation for that economy, but we still need the American Jobs Plan to build on that foundation to build this country back better. So the bottom line is this today’s report is good news. Today’s report shows that the country what it can do when we act together to fight a virus, to give working people the help they need, but we still have a long way to go. But I know that we’re going to get there and we’re going to get there together. And may God bless you all and may you have a happy Easter and a holy Easter. Thank you.

Speaker 4: (10:42)
Mitch McConnell says he’s going to fight your administration every step of the way. What is your reaction to that?

President Joe Biden: (10:48)
If the Republicans argue that we don’t need infrastructure, it need not… They’ve been talking about the need for it for years now. If the Republicans decide that we need it, but they’re not going to pay for it, it’s just going to increase the deficit. If Republicans say the next phase of my plan, we don’t need to invest in VA hospitals and keep the sacred obligation we made to so many Americans, if a Republican saved the 400,000 homes and schools and daycare centers that have lead pipes, lead pipes, delivering water to their doors, if they say we shouldn’t be doing that… What do you think would happen if they found out all the lead pipes were up in the Capitol and every time they turned on a water fountain? I think the Republicans voters are going to have a lot to say about whether we get a lot of [inaudible 00:11:47].