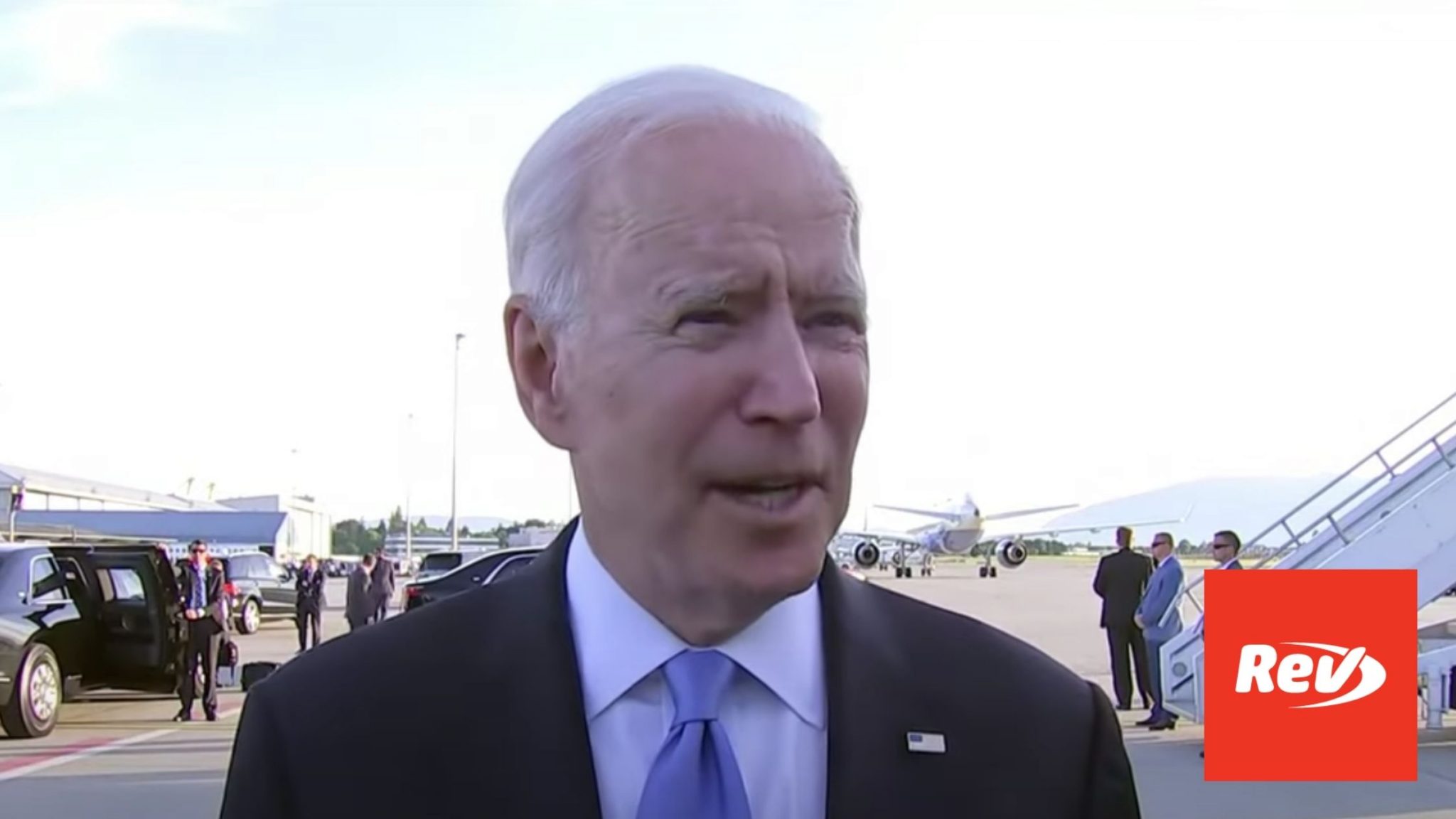 President Joe Biden took questions from the press at the airport before leaving Geneva on June 16, 2021. Read the transcript of his remarks on the Putin summit here.

President Biden: (00:04)
Not me, but I think we, the country, has put a different face on where we’ve been and where we’re going. And I feel good about it. I feel one of the things that I think understandably there was a good deal of skepticism about, would the G7 sign on and give America back its leadership role? I think it did. It wasn’t me, but it meant they’re glad America’s back. They’re glad America’s back and they acted that way. And then when we went to NATO, I think it was the same thing. We had really good meetings there and a real response, as well as the EU. I didn’t get one single person, not one of the world leaders said doing anything other than thanked me for arranging a meeting with Putin. And I thought, quite frankly, that I was in a much better position to represent the West after the previous three meetings with Putin, knowing that the rest of the West was behind us. So I owe them all a debt of gratitude.

Speaker 3: (01:18)
If you could. First would be this fate of the infrastructure bill. There’s now a bipartisan group that has a new offer. Have you had time to see it?

President Biden: (01:25)
No, I’m not [inaudible 00:01:26]. I honestly haven’t seen it. I don’t know what the details are. I know that my Chief of Staff thinks there’s some room that there may be a means by which to get this done. And I know that Schumer and Nancy had moved forward on a reconciliation provision as well. So I’m still hoping we can put together the two bookends here.

Speaker 3: (01:51)
And the second issue is that yesterday, or earlier this week, Mitch McConnell said that if Republicans were to take back the Senate in 2022, he did not see a way that you could get a Supreme Court Justice confirmed. Do you have a response to that? This would be next year.

President Biden: (02:05)
No, I know. I know. The answer is Mitch has been nothing but no for a long time and I’m sure he means exactly what he says, but we’ll see.

Speaker 4: (02:23)
Mr. President, did you talk with President Putin about the Iran nuclear deal?

President Biden: (02:32)
It was about how we would jointly work. And I’m not going to discuss what we discussed.

Speaker 5: (02:36)
Mr. President, Caitlin’s question that you answered at the very end there that you came over to talk about, I think at the heart of it was this question of whether or not you seem overly optimistic, given that what we all listened to President Putin essentially say the same old things that he said forever, rejecting all responsibility for all that stuff. And I guess the question that she was trying to get, and maybe you can take another stab at it, is what concrete evidence do you have from these three plus hours that suggests that any movement has been made? And I don’t mean that to be an-

President Biden: (03:20)
Look, to be a good reporter, you’ve got to be negative. You’ve got to have a negative view of life, it seems to me, the way you all … You never ask a positive question. Why, in fact, having agreement, we’ll find out. We have an agreement to work on a major arms control agreement. I started working on arms control agreements back all the way during the Cold War. If we could do one in the Cold War, why couldn’t we do one now? We’ll see. We will see whether or not it happens. I mean, the thing that always amazes me about the questions, and I apologize for having been short on this before, if you were in my position, would you just say, “Well, I don’t think, man, anything is going to happen. It’s going to be really rough. I think you’re going to really be bad,” you’d guarantee nothing happens. You’d guarantee nothing happens. So, so far-

President Biden: (05:11)
Sure, it’s Vladimir Putin, but look, it was also … I don’t compare him to Putin, but it was the French President said he will never go for more money for NATO. Guess what? He’s agreed. I mean look, guys, I’m going to drive you all crazy because I know you want me to always put a negative thrust on things, particularly in public and negotiate in public. I don’t have to trust somebody. We didn’t have to trust somebody to get, start to. It wasn’t about our trust. Well, I trusted the Russians. Oh man, they’re really [inaudible 00:05:58].

President Biden: (06:06)
Yeah, I know, but here’s the thing. Folks, I don’t see any benefit ever to begin a negotiation, and I mean, you’re the brightest people in the country, you’re the most important people on detail. I’m not being solicited. You are. But it makes no sense for me to negotiate with you. It makes no sense for me to tell you what I’m about to do, not because I want to hide anything from you. Why would I telegraph that?

Speaker 6: (06:49)
Was there any moment that you were really surprised by?

President Biden: (06:55)
No, I wasn’t surprised because I was convinced that … I’m going to choose my words. Russia’s in a very, very difficult spot. They are getting squeezed by China. They want desperately to remain a major power. You all are writing about, not illegitimately, Biden already gave Putin what he wants, legitimacy. He’s standing on the world stage with the United States. They desperately want to be relevant, and they don’t want to be known, as some critics have said, the upper [inaudible 00:07:36] with nuclear weapons. It matters. And I found it matters to almost every world leader, no matter where they’re from, how they’re perceived, their standing in the world. It matters to them. It matters to them in terms of their support at home as well.

President Biden: (07:52)
And so I think that there is … I’m trying to think how to shorten this, so I can get in the plane. I’m of the view that in the last three to five years, the world has reached a fundamental inflection point about what it’s going to look like in 10 year’s time. I mean it literally. It’s not hyperbole. It’s not like I’m trying to pump it up. I think it’s a genuine reality. So each of the countries around the world, particularly those who’ve had real power at one time or still do, are wondering how do I maintain and sustain our leadership in the world? That’s what the United States is going through right now.

President Biden: (08:48)
How do we sustain us being a leading, most powerful and most democratic country in the world? A lot’s going on. I don’t know about you. I never anticipated, notwithstanding, no matter how persuasive President Trump was, that we’d have people attacking and breaking down the doors of the United States Capitol. I didn’t think that would happen. I didn’t think I’d see that in my lifetime, but it’s reinforced what I’ve always known and what I got taught by my political science professors and by the senior members of the Senate that I admired when I got there, that every generation has to reestablish the basis in this fight for democracy. I mean, for real. You literally have to do it. And I’ve never seen, including during since the Civil War, such an outward assault on voting rights. I mean just a flat assault.

President Biden: (09:46)
I didn’t anticipate that happening four years ago, but it’s happening now. There’s a lot at stake here. Each of the countries, we have our own concerns and problems, but we still, as long as I’m president, we are going to stick to the notion that we’re open, accountable and transparent. I think that’s an important message to send the world. Thank you all.