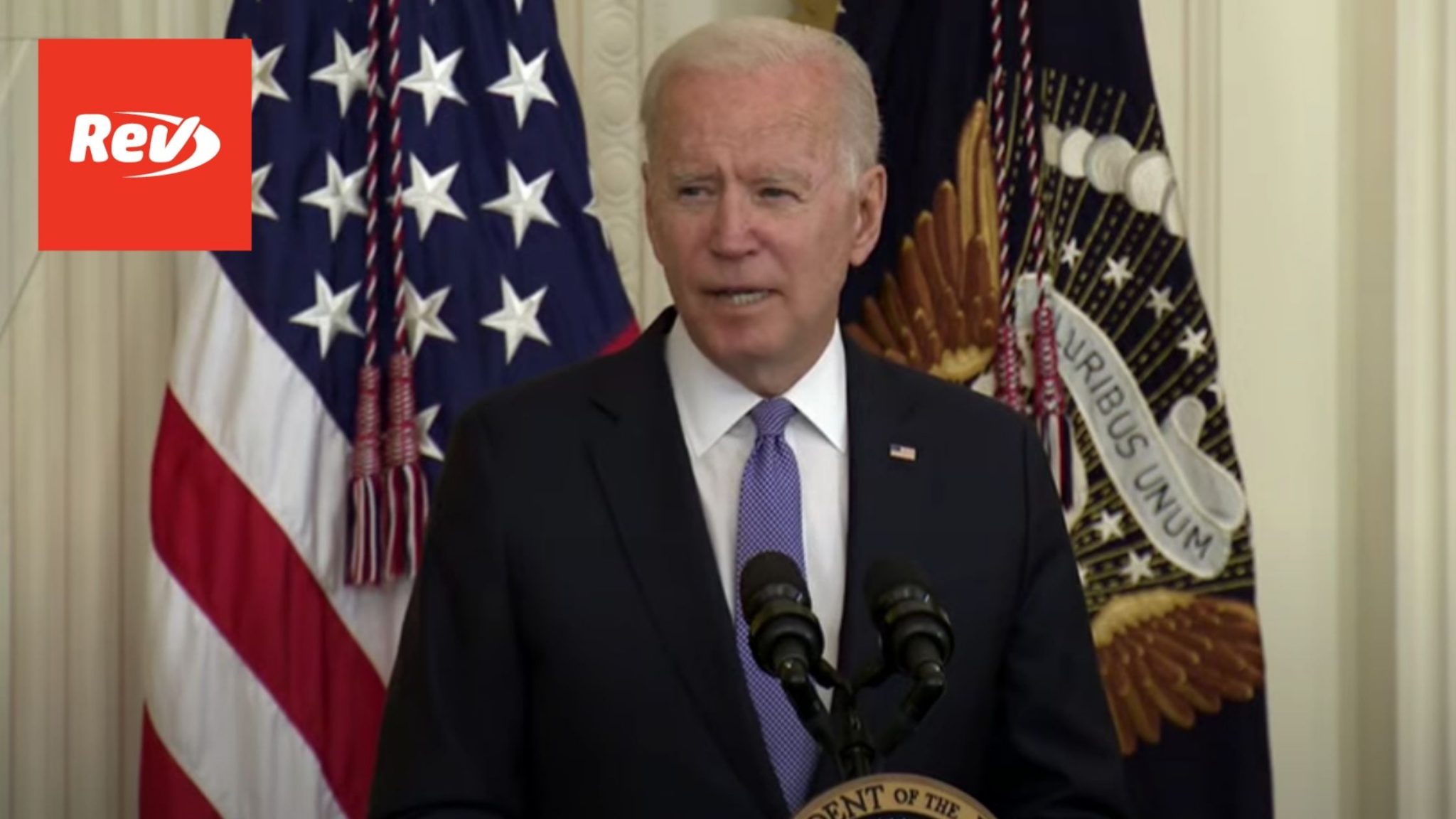 President Joe Biden signed the Victims of Crime Act Fix into law on July 22, 2021. Read the transcript of his speech remarks on the legislation here.

President Joe Biden: (00:00)
Thank you. Every time I hear that, I’m wondering when he’s coming, please. Everybody sit down. Thank you. Let me begin by doing something no speaker should ever do, by apologizing. I got a little tied up in the other office I work in. Pat and I apologize for keeping you waiting because I know you’re all equally as busy as I am. I want to thank you. Today I think is a day of hope. I mean that, a day of hope and healing for victims of crime and organizations that support those victims of crime. And I want to thank the Vice President and the Second Gentleman, Senators Durbin, I think he’s here. I thought I saw him, Senator Durbin and Baldwin and Grassley and Graham and Murkowski, Representatives Nadler and Fitzpatrick and Jackson Lee and Wagner and Scanlon, and everyone who has helped make possible this moment, including so many of you who are here today that I haven’t mentioned.

President Joe Biden: (01:05)
When someone commits a crime, it’s not enough to bring the predator to justice. We also need to support the victims. And it’s something that way back 150 years ago, when I was Chairman of the Judiciary Committee, we spent a lot of time working on setting up victims’ funds. That’s what this Crime Victims Fund does. In many years of working on the issue, I’ve visited an awful lot of domestic violence shelters. Every time I’d go into a city, I’ve quietly, before I went to where I was supposed to be, quietly slipped in and spend time in the domestic violence shelter to speak to the people giving the services, to people getting the services. And you know, many times the body language that you’d see when you walked in was one of the victims of crime find themselves almost curled up in a ball. They were still suffering from a serious, serious, not only physical abuse they received, but quite frankly, emotional abuse.

President Joe Biden: (02:16)
And you can see the pain. You could see the pain was still with them. And you wondered, when was this going to abate no matter what we did. According to the CDC, and I think Senator Feinstein remembers I got in trouble because when I was pushing the legislation way back in those days, I said, “I’m convinced that women who are victims of domestic violence suffer from post-traumatic stress, no different than a soldier being shot at regularly.” They come home and every time your significant other would come home, if dinner wasn’t ready, they smashed your head against the wall. There’s no difference than being shot at. And the CDC two years later came out and said survivors can experience mental health problems and such depression and symptoms of post-traumatic stress syndrome. Even before research confirmed it, you could see it.

President Joe Biden: (03:16)
And there are economic costs for survivors as well, medical costs lost productivity from work and navigating the court system. That’s why victims compensation program helped victims and their families cover the costs they’ve suffered from the crime. They can, there can be counseling and medical bills, lost wages because you couldn’t work, paying for temporary housing for a family fleeing abuse, even fixing a broken door kicked down by an abuser. And the vast majority of children out in the street are the children who are in fact, the children of abused women. It can also be a longterm support survivors need to heal every time in every single sense of the word. In 2019, these victims’ compensation funds went directly to 230,000 victims, 230,000. These funds also got to states, territories and tribes to support thousands of victim service organizations. These organizations have provided services and support to over 13 million survivors. And by the way, last night, some of you heard me talk about the need for more policing that understands the need for communities and citizens.

President Joe Biden: (04:32)
These funds also go to law enforcement agencies to support training on how to respond to victims who have experienced trauma. In 1984, I was proud to support the passage of the Victims of Crime Act that created this fund. I’m also proud to sign the law that significantly strengthens it today. This fund doesn’t take a dime of taxpayer’s money. It uses fines and penalties paid by convicted federal criminals. However, fines or what are called non prosecutorial agreements or defendant or deferred prosecution agreements did not go into this victims’ crimes fund in the past. Since there has been more and more of these agreements in recent years, the fund has been depleted. That meant dramatic cuts in the funding it could provide for victims and for organizations to support these victims. Between 2017 and today, the amount of money in these funds has gone down 92%, which has resulted in a 70% reduction in victims assistance programs and grants.

President Joe Biden: (05:39)
This means that for a lot of victims, the help they need isn’t there any longer. When my son Beau was the Attorney General of the state of Delaware, he took pride in getting more support more quickly to victims, especially to protect and care for child victims. And I know that as a San Francisco DA and a California Attorney General, Vice President Harris expanded support for victims of crime and launched one of the nation’s first medical centers focused on treating childhood trauma caused by violence in a home or in a community.

President Joe Biden: (06:14)
This bill is going to allow us to make sure that all the fines and penalties that are from federal cases go into the victims, the Crime Victims Fund to rebuild this fund because it’s badly needed. This is going to enable us to provide more help and support to victims of domestic violence, sexual assault, child abuse, trafficking and other crimes all across America. In order to provide more access and safety and services for victims of gender-based violence, it’s long past time to reauthorize and strengthen the protections through the Violence Against Women Act, please, please.

President Joe Biden: (07:03)
With your experience, you all can come together in a bipartisan bicameral way to pass this bill. We need to do the same thing to reauthorize the Violence Against Women Act without further delay. After these changes in the Victims Crime Act passed this week, a leader from one of the states’ coalition against domestic violence sent a letter to our national organization. And she wrote about working in a shelter where their ability to serve people rose and fell based on the fundings of victim services. She told the story of a client she lost to domestic violence homicide because the budget cuts left them without space at the shelter where staff needed to help this particular woman. Upon learning about the law I’m about to sign today, she wrote, and I quote, I quote, “I think about her every day. This is going to be truly lifesaving.”

President Joe Biden: (08:02)
This is what you’ve done, truly lifesaving. In closing, I want to thank those angels working in the front lines to help these victims, especially during this pandemic. That’s made the work both more difficult, more in demand and more dangerous. And I want to thank the advocates who mobilize and bring together these important changes in the law. There are thousands of people out there who may not know about the work you did to get this bill passed, but they’ll know that they’re getting the help they need to put their lives back together and move toward healing and toward justice. I’ll now have the great honor of signing the bill and I’d invite the sponsors to come on up and stand with me, if you’re willing.

President Joe Biden: (08:52)
Great honor to be able to sign it. Nah, I’m not going to do what Barack used to do, because Barack Obama used nine pens to do it. I’m going to turn and I’m just going to hold you all. You’re not going to know which one was signed.

President Joe Biden: (10:26)
Everybody will have one, I promise you.

President Joe Biden: (11:20)
This is one of those bills where what they did has literally, not figuratively, changed the live and women and children and some men out there. So thank you.