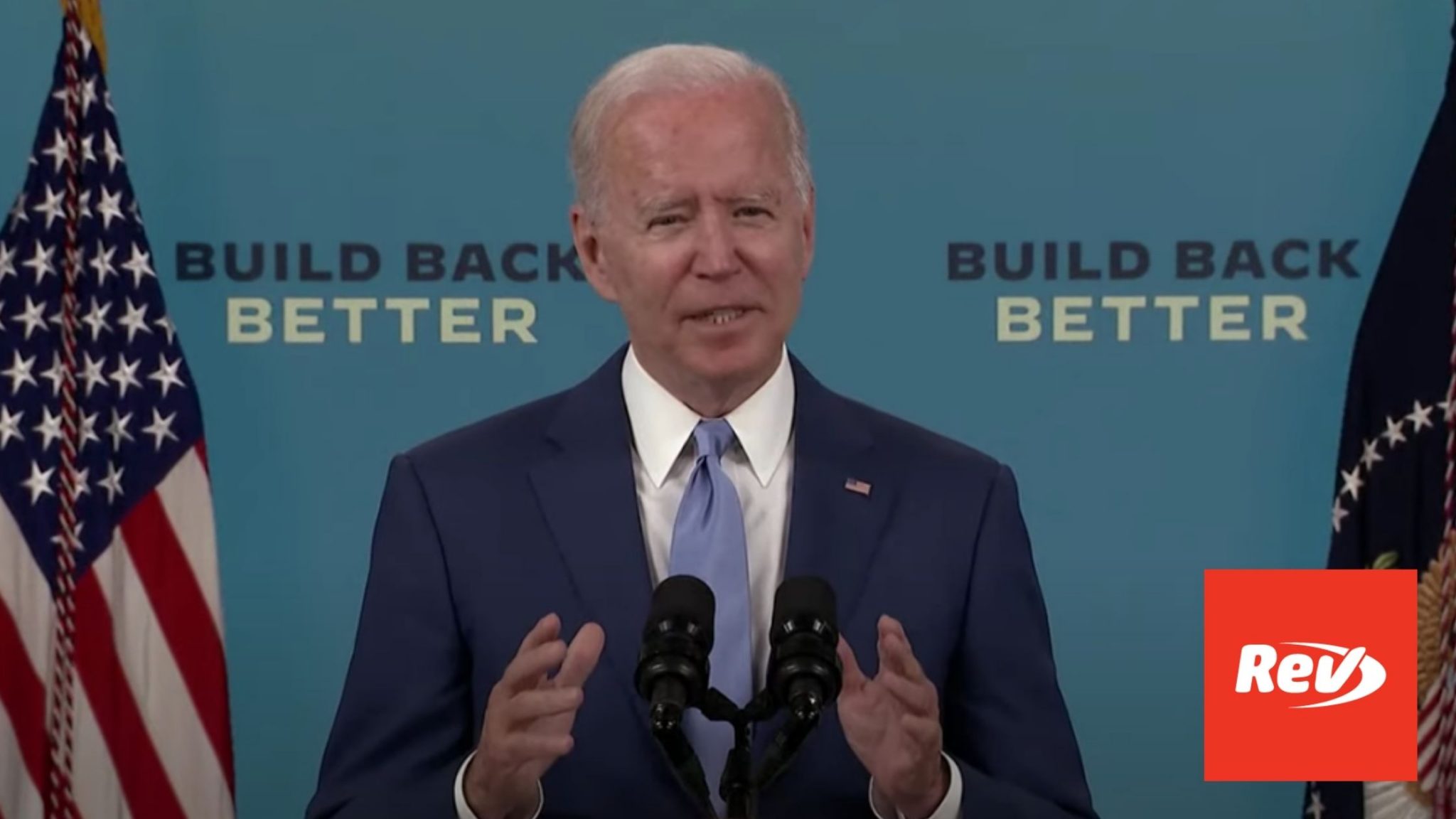 President Joe Biden gave remarks on the September jobs report on October 8, 2021. The economy added 194,000 jobs in September. Read the transcript of his speech here.

President Joe Biden: (05:52)
And working Americans are seeing their paychecks go up as well. In September we saw one of the largest increases in average wages paid to working Americans on record. Today’s report comes one day after the Labor Department found in the third quarter of this year, the number of layoffs in job reductions was the lowest in this country since 1997. Overall, the unemployment report shows almost 200,000 jobs were created last month, over 300,000 in the private sector and 26,000 in manufacturing, offset by some seasonal adjustments in education hiring. The monthly total is bounce around, but if you take a look at the trend it’s solid. On average 600,000 new jobs created every month since I took office. And in three months before I got there, that was one 10th what was being created, 60,000, as opposed to 600,000 jobs a month. In total, the job creation in the first eight months of my administration is nearly 5 million jobs.

President Joe Biden: (07:01)
Jobs up, wages up, unemployment down, that’s progress. And it’s attributed to the hard work and resilience of the American people for battling through this pandemic, working to keep their businesses afloat. Remember, today’s report is based on a survey that was taken during the week of September the 13th, not today, September the 30th. When the COVID cases were averaging more than 150,000 per day. Since then, we’ve seen the daily cases fall by more than one third, and they’re continuing to trend down. We’re continuing to make progress.

President Joe Biden: (07:39)
Right now, things in Washington, as you all know, are awfully noisy. Turn on the news and every conversation is a confrontation, every disagreement is a crisis. But when you take a step back and look at what’s happening, we’re actually making real progress. Maybe it doesn’t seem fast enough. I’d like to see it faster and we’re going to make it faster. But maybe it doesn’t appear dramatic enough, but I too would like to, as I said, move it faster. We’re making consistent, steady progress though. And thanks to bipartisan agreements, we’re making progress on funding the government and raising the debt limit. So people continue to get their social security checks, the military continue to get paid and so much more.

President Joe Biden: (08:21)
We’re making real progress on COVID-19 as well. More than 186 million Americans are now fully vaccinated. More than 75% of eligible Americans have gotten at least one shot, and COVID cases are down 40% in the past month, hospitalizations are down over 25%. In July, when I announced the first vaccination requirement, about 95 million eligible Americans still had not been vaccinated. Today, we’ve reduced that from 95 to 67 million eligible Americans haven’t been vaccinated. That’s still much too much. There’s more work to do, including getting more people vaccinated. But we continue to make progress. And the American Rescue Plan, which we passed shortly after I was elected, we made progress providing rent and mortgage relief to help keep roofs over people’s heads. We provided checks in pockets and other benefits so families can put food on the table for their families, hundreds of thousands of loans to help small businesses stay open and keep employees on a job getting paid.

President Joe Biden: (09:29)
Today, towns and cities and states that were at risk of losing hundreds of thousands of jobs before because they didn’t have the budget to pay, we help make their payroll for them. So they could keep teachers, police officers, firefighters, essential workers on the job. Helping schools stay open with the equipment and resources needed to keep students and educators safe. And we finally gave a tax break, I’ve been working at this for a long time, to families with children. Which as I speak, is providing monthly checks for more families for 60 million children, $300 per month for every child under the age of seven, $250 per month for every child under the age of 17. Keeping the tax cut, it’s a tax cut for these people and cutting child poverty nearly in half, over 40%. We’re making progress, protecting our air and water as well and our natural lands, much more to do. And I’ll have more to say about that later today.

President Joe Biden: (10:30)
The jobs numbers also remind us that we have important work ahead of us and important investments we need to make. America is still the largest economy in the world, we still have the most productive workers and the most innovative minds in the world, but we risk losing our edge as a nation if we don’t move. Our infrastructure used to be the best in the world, today, according to the World Economic Forum, the United States of America ranked 13th in the world, 13th, on infrastructure, roads, bridges, ports, et cetera. We’re among the first in the world to guarantee access to universal education back at the turn of the 20th century. Now, the Organization of Economic Cooperation and Development, catch this, ranks America 35 out of 37 major economies when it comes to investing in early childhood education as a percent of GDP, 35 our of 37. On all of these investments that fuel strong economy we’ve taken our foot off the gas and the world has taken notice, including our adversaries. And now they’re closing the gap.

President Joe Biden: (11:40)
Look, so it’s essential that we have to regain the momentum we lost. As my wife says all the time, a professor she’s, any country that out-educates us is going to out-compete us. The work of our time is to prepare ourselves for it to be competitive to win the fast-changing 21st century global economy. That’s why I proposed two critical pieces of legislation being debated here in Washington right now. One focus on the investments we need to make in the physical infrastructure of America, roads, bridges, ports, et cetera. The second focus on the investments that need to make in the American people to make us more competitive. I know this is my legislation, and I feel strongly about it, but the people who have the most at stake are the American people. So we need to stay focused on what these bills will mean to the people who are just looking for a little bit of breathing room, a fair chance to build a decent middle class life to succeed and thrive is spending just hanging on by their fingernails. We need to keep an eye, an eye, on what’s fundamentally at stake for our country, the ability to compete and win the race of the 21st century as we did the 20th century. A race that other countries are doing everything they can to win.

President Joe Biden: (12:58)
In recent years, China has spent around three times as much on infrastructure, three times as much as a share of its economy than the United States has. Our infrastructure bill makes investments we need to rebuild the arteries of our economy, the roads, the highways, the bridges, the ports, the airports, the rails. And we’re going to allow us to replace led water pipes, which are poisoning our children and families. It’s ridiculous. Build a modern energy grid that we can withstand storms and carry renewable energy across America, make high-speed internet affordable and available to everywhere in America. And create good union jobs in the process of putting that together. We’re going to make the largest investment in public transit in American history, and we’re going to make the most important investments in our rail since their creation of Amtrak 50 years ago.

President Joe Biden: (13:52)
But isn’t enough just to invest in our physical infrastructure. We’re going to lead the world like we used to. If we’re going to do that, we also have to invest in our people. That’s what my second bill does, the Build Back Better Plan, that’s what it does. Today, only about half of the three and four year olds in America are enrolled in early childhood education. In Germany, France, the UK, in Latvia, that number is more than 90%. We’re falling behind. It’s not just early education, according to one study, catch this. American ranks 33rd out of the 44 advanced economies when it comes to the percentage of our young people who have attained a post high school degree. United States, 33rd out of 44. My Build Back Better Plan gets us back on track to making four additional years of public education available for every person in America. Two years of high quality preschool and the front end, which indicates that over 56% of the children be able to go through all 12 years and beyond without any interruption and investments in community college. So our students can gain the skills they need and carve out a place for themselves in the 21st century economy.

President Joe Biden: (15:17)
We’re going to help build families. We’re going to help them afford to care for their new baby, a child, an elderly relative. It’s going to extend the tax credit for families with children. It’s going to help us meet the moment on climate change and become a global leader in the fast growing clean energy industries like solar and wind power. The whole world knows that the future of the auto industry is electric and battery technology. We need to make sure America builds that future instead of falling behind. We should build those vehicles and the batteries that go into them and the charging stations that are going to need, the 500,000 we’re going to build across America. Here in the United States we should be doing this.

President Joe Biden: (16:06)
And look, if we get this done, we’re going to breathe new life in our economy and our workforce and we’re going to breathe cleaner air at the same time. These are the kinds of investments that will get America back in the game and give our workers a chance, a fighting chance. Economists left, right and center agree. Earlier this year Moody’s on Wall Street projected at the investments in these bills will bring us higher GDP and additional 2 million jobs per year in lower unemployment. These bills are not about left versus right or modern versus progressive or anything else that pits Americans against one another. These bills are about competitiveness versus complacency. Competitiveness versus complacency. Opportunity versus decay. They’re about leading the world or whether we’re going to let the world pass us by.

President Joe Biden: (17:04)
The American people understand what’s at stake here. They understand that when workers and families have a better shot, America has a better shot. Give it half a chance to American people have never, never, ever, ever let their country down. Today, we receive more evidence of the progress we’re making and know we can make a lot more in the days ahead.

President Joe Biden: (17:27)
I want to thank you and God bless you all, and may God protect our troops. Thank you very much.