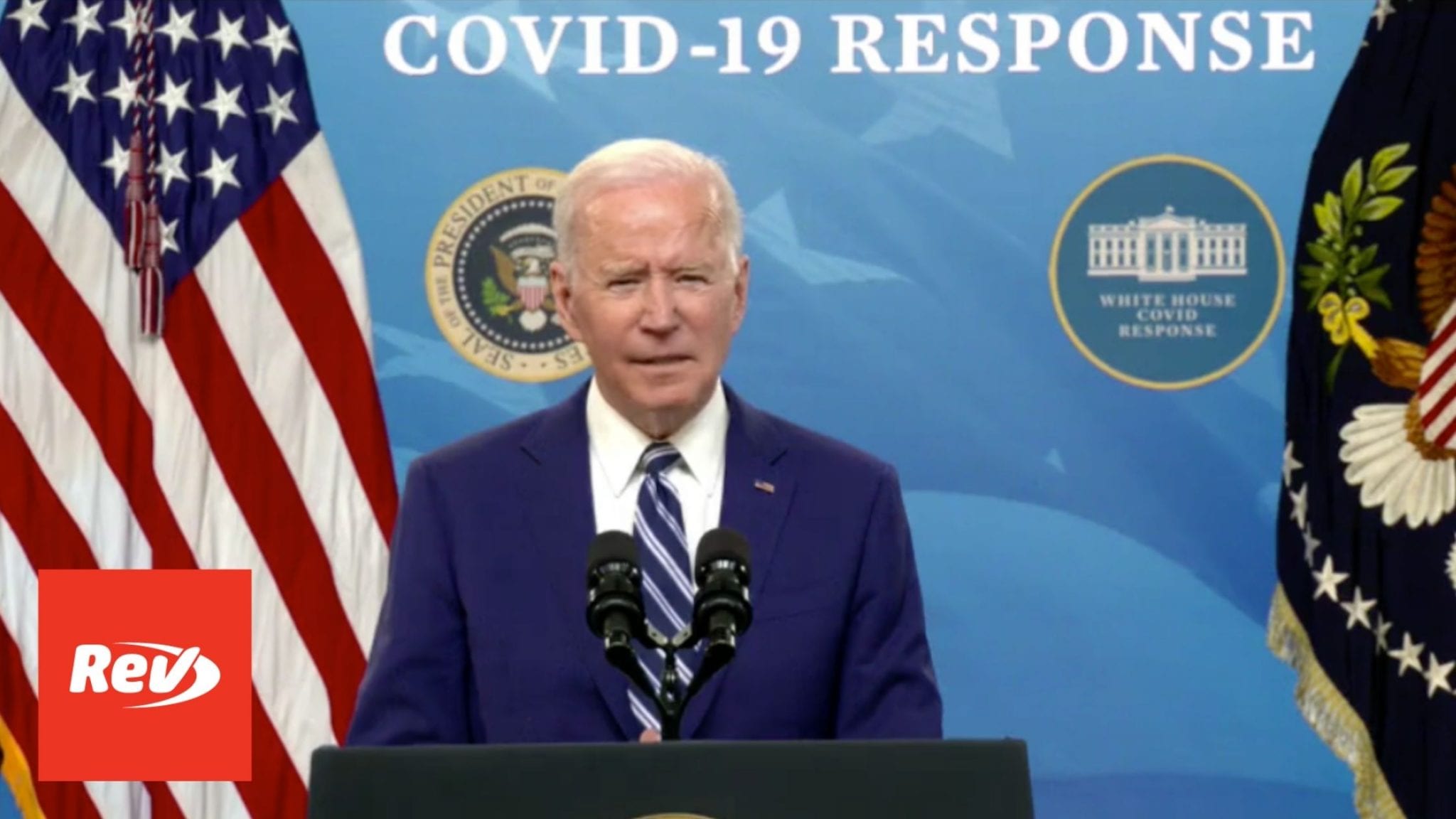 President Joe Biden gave a briefing on the COVID-19 pandemic and vaccine distribution on March 29, 2021. Read the transcript of the briefing speech with coronavirus updates here.

Joe Biden: (01:36)
Good afternoon. Last week we set a goal of 200 million shots by day 100 of the administration, double the original goal that I had said. And to make that progress, over the last three days, we’ve had a record number of shots in arms with over 10 million shots recorded in the weekend. Over 10 million shots in three days, that would have been inconceivable in January. The progress we’ve made on vaccinating this country is a great American story. The federal government has stepped up, taken responsibility and launched a massive federal vaccination program. Governors and mayors of both political parties, Republicans and Democrats have stepped up as well. Our military, our National Guard, FEMA, they have all been incredible, healthcare providers, community leaders from all walks of life.

Joe Biden: (02:36)
So many volunteers of all ages and backgrounds stepped up as well. My fellow Americans, look at what we have done in the past 10 weeks. No other country has come close, 100 million shots in less than 60 days. And now we’re moving to the next 100 million shots in just 40 days. You heard me say many times before, our progress in vaccination is a stunning example that there’s nothing, nothing this country cannot do if we put our minds to it and we do it together. But as I’ve also said, I will always give you it straight, straight from the shoulder, our work is far from over. The war against COVID-19 is far from won. This is deadly serious. We share the sentiment of Dr. Walensky, the head of the Center for Disease Control and Prevention. The CDC expressed earlier today this is not a time to lessen our efforts. That’s what she said.

Joe Biden: (03:38)
We could still see a setback in the vaccination program. And most importantly, if we let our guard down now, we could see the virus getting worse, not better. As many people as we’ve vaccinated, we still have more Americans left to go. We will administer more shots in March than any country on earth. But even so, we have to give more shots in April than we did in March because we’re in the life and death race for the virus that is spreading quickly with cases rising again, new variants are spreading and sadly, some of the reckless behavior we’ve seen on television over the past few weeks means that more new cases are to come in the weeks ahead. With vaccines there’s hope, which is a very good thing to state the obvious, but people are letting up on precautions, which is a very bad thing.

Joe Biden: (04:36)
Look, to this point, cases have fallen two thirds since I took office, deaths have also fallen two thirds, but now cases are going back up, and in some states, deaths are as well. We’re giving up hard fought, hard won gains. And as much as we’re doing, America, it’s time to do even more. All of us have to do our part, every one of us. So let me start here, first, this week, thanks to my administration’s intensive work with vaccine manufacturers and distribution efforts, the amount of vaccines that are going to be available for vaccination sites will be a new record, 33 million doses of vaccine this week. By getting more vaccine supplied to states, community health centers, and pharmacies, we can vaccinate the highest risk Americans even more quickly than we already are.

Joe Biden: (05:38)
And then, and then we make it possible to open up the supplies for all adults and try to beat the renewed spread of this virus. As a result, I’m also pleased to announce that we’re on track this week, just 10 weeks after I became president to achieve nearly 75% of Americans over the age of 65 get at least one vaccination shot. When I took office in January 20th, that number was 8%, it’s going to 75%. That’s a lot of grandparents are now able to safely hug their grandchildren and they couldn’t do so just a short time ago. And with the supply we’re releasing this week, just this week alone, there are more doses of vaccine available for seniors this week than any week thus far. So seniors, please, if you have not gotten your shot yet, get it this week, get it. Second, I’m reiterating my call for every governor, mayor, and local leader to maintain and reinstate the mass mandate.

Joe Biden: (06:46)
Please, this is not politics, reinstate the mandate if you let it down. And business should require masks as well. The failure to take this virus seriously, precisely what got in this mess in the first place, risks more cases and more deaths. Look, as I do my part to accelerate the distribution of vaccinations, I need the American people to do their part as well. Mask up, mask up, it’s a patriotic duty. It’s the only way we ever get back to normal, to cheer together in stadiums full of fans, to gather together on holidays again safely, go to graduations, weddings. Third, I announced on March 11th, I direct every state, territory, and tribe to open up their vaccinations to all adults no later than May 1. I issued that order because moving beyond priority groups to enable all adults to get vaccinated is critical to having a July 4th that’s closer to normal. I want this to come as quickly as possible.

Joe Biden: (08:02)
And I want to thank the governors, Democrats and Republicans who have responded to this directive. In fact, the vast majority of governors have set open access dates even earlier than a deadline of May 1st. But in this race against the rapidly spreading virus, as fast as we are going, we need to go faster. So to make it easier for Americans to get vaccinated as the supply grows and vaccination eligibility expands, I’m directing my COVID team to ensure there is a vaccine site within five miles of 90% of all Americans by April the 19th, three weeks from today. Look, we’re going to do this by growing from having 17,000 pharmacies giving out vaccination shots to nearly 40,000 pharmacies doing it within the next three weeks. That’ll more than double the number of pharmacies where you can go get vaccinated. We aren’t stopping there.

Joe Biden: (09:04)
In the next three weeks, we’ll add 12 more federally run mass vaccination sites. Every day at these sites, tens of thousands of people are able to drive up, get a vaccine shot while in their car and leave in less than an hour. And over 60% of the shots given at these sites goes to minority communities because in minority communities, we have to reach out, they’re the ones most affected by both the vaccine, but also by the pandemic. We’re also going to send more aid to states to expand the opening of more community vaccination sites, more vaccines, more sites, more vaccinators, all designed to speed our critical work. We also need to make it easier for those who want shots but cannot access vaccination sites to get vaccinated. This is also where we’re focused on the seniors most immediately.

Joe Biden: (10:05)
While we have made incredible progress and starting to vaccinate nearly three quarters of our seniors and now putting vaccination sites within five miles of 90% of all Americans, that still isn’t enough as far as we’re concerned. We know that there are a number of seniors and people with disabilities who may be isolated and have lack of access to transportation. And there are community groups that can help, they’re trying to help now. So our fourth announcement today is that I’m sending out millions of dollars through the Department of Health and Human Services to provide assistance, including transportation so more vulnerable seniors and people with disabilities can get their shots, because they get help to physically get there to get the shot. Neighbors helping neighbors, what a truly American effort. We cannot let transportation be a barrier to any senior getting a vaccination.

Joe Biden: (11:07)
And so where does this put us? We’re making progress on vaccinations, but cases are rising and the virus is spreading in too many places still. That’s why today I’m taking these steps to make our American turnaround story, our vaccination program move even faster. Thanks to all the work we’ve done these past 10 weeks, the added steps I’m announcing today with them, I’m pleased to announce that at least 90% of all adults in this country will be eligibly vaccinated by April the 19th, just three weeks from now as we have the vaccines. For the vast, vast majority of adults, you won’t have to wait until May 1, you’ll be eligible for your shot on April 19th. Finally, 10% will be eligible no later than… the final 10%, are eligible no later than May 1.

Joe Biden: (12:11)
And as I just said, due to the steps we’re taking today, 90% of Americans will be within five miles of the location where they can get a shot as of April the 19th. So we’re moving toward 90/90 by April 19th. That is by April 19th, three weeks from today, 90% of adults, people 18 and over will be eligible to get vaccinated. 90% of all Americans will be living within five miles of a place they can get a shot. And of course, it’ll take time for everyone to get their appointment. It’s a big country. And as fast as we’re going, we still have a long way to go to finish this vaccination effort. In fact, we aren’t even there, we’re even halfway yet, but being at 90/90 just three weeks from today should give hope to the country.

Joe Biden: (13:06)
Let me close with this. The progress we’re making is a significant testament to what we can do when we work together as Americans. But as I’ve always said, we still need everyone to do their part. We still are in a war with this deadly virus. And we’re bolstering our defenses, but this war is far from won. Together we have so much to be proud of the past three weeks, past more than three weeks, past 10 weeks. We also have so much to be sorrowful about, nearly 1,000 Americans a day are still dying from COVID-19 as we approach 550,000 deaths in a single year. Until this country is vaccinated, each of us has to do our part. We have an obligation, patriotic obligation. Wash your hands, stay socially distance. Wear a mask as recommended by the CDC and get vaccinated. Get your friends and family vaccinated when you can help.

Speaker 2: (14:49)
Mr. President, Dr. Walensky said she’s scared of an impending doom with COVID cases on the rise, are you?

Speaker 3: (14:59)
Mr. President, do you believe that some states should pause the reopening efforts?