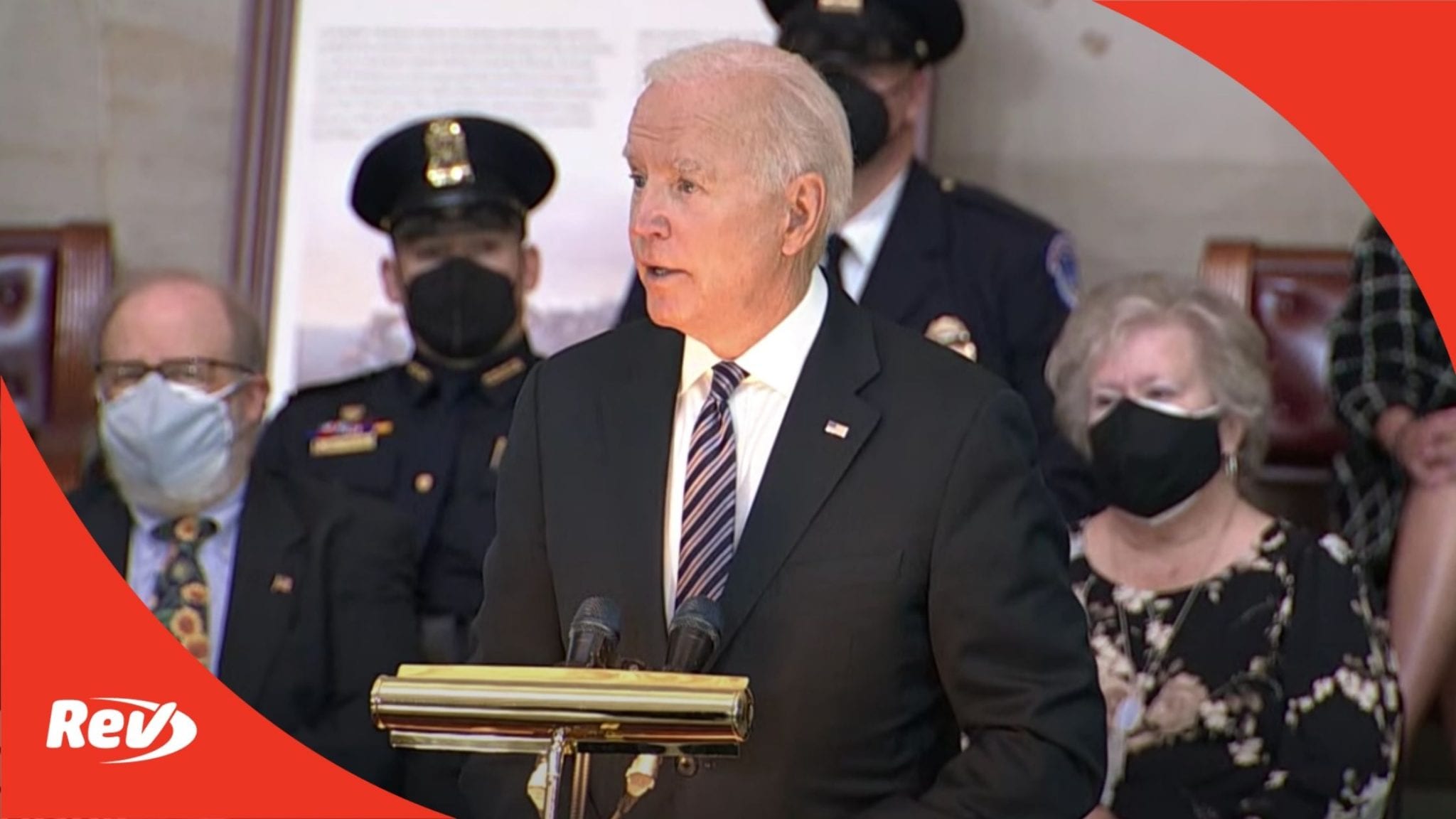 Joe Biden: (00:00)
Capitol Hill police and all that are here to pay tribute to this Capitol Policemen who fell in the line of duty. Acting Chief Pittman and the men and women in the Capitol Police force, I’m sorry this is the second time in two months you have such a ceremony. And mom, I didn’t know Billy, but I knew Billy. I grew up with Billy in Claymont and Scranton, Pennsylvania. Billy was always the kid that if you got in a fight, you were outnumbered three to one, he’d still jump in, knowing you both get beaten. He was the one who always kept his word.

Joe Biden: (01:07)
If he said, he’d be there, he’d be there. He was the one who, just like folks I grew up with, wasn’t capable of saying no when you needed it. Just like you, Officer Kenny Shaver, who was injured in the attack with Billy, and never has there been more strain … And I’ve been here a long time. I’ve been here since 1972 as a US Senator in ’73. So much strain and responsibility have been placed on the shoulders of the Capitol Police. And yet, you hear it, you see it, you watch them, and you watch them do their duty with pure courage and not complain.

Joe Biden: (02:18)
Sergeant Kyle King, I’m sorry you had to make the call. That telephone call that every family dreads when they have a son or daughter, husband, wife, brother, sister in uniform. Because every morning they pin that badge on, go to work, they expect to come home, in the back of your minds, won’t ever get that call. You knew Billy since grade school. I think it was the fourth grade. I got to deal with all the guys that I grew up and knew in fourth grade. When one passes away, the other one has to give up, because he has too much information about you, too much they leave behind. But, I’m sure all those memories of North Adams and Clarksburg never changed who Billy was. He was defined by his dignity, his decency, his loyalty and his courage.

Joe Biden: (03:27)
And mom, that’s because of you and his dad. That’s how it happened. Not by accident. Ms. Evans, I have some idea of what you’re feeling like. I buried two of my children. And people have come up to you and are going to come up to you for some time and say, “I know how you feel.” They’re going to say that to sis. They’re going to say that to the kids. They’re going to say that to his former wife. And after a while, you know everybody means well. You feel like saying, “You have no idea.” But the truth is that a time’s going to come, I promise you. Not believable now. When a memory, a fragrance, a scene, a circumstance, the way his son tilts his head the way he did when he was that age, it’s going to bring back the memory. And for the longest time, it’s going to feel like, at that moment, that memory, is going to feel like you got the phone call just that moment ago.

Joe Biden: (05:08)
And they’re going to be people celebrating Billy’s life. And as much as you appreciate it, all of you, it also is hard. You relive everything again. I got a phone call when I first got here and lost my family, part of my family, from a person I never knew, never met, the former Governor of New Jersey who was literally 40, 45 years my senior. He told me he knew how I felt. And I didn’t say anything. He said, “I know what you’re thinking.” He said, “But I did know. He said, “I used to come home … I was the Attorney General of New Jersey before I was Governor. I’d come home for lunch because I lived just across the green from my office. And one day, a woman who helped out at our home came running across the green, saying, ‘She’s gone, she’s gone.'” His wife had had an aneurysm.

Joe Biden: (06:21)
He said, “You know what I did?” He said, “I kept … I got graph paper. And four months out, I put the month on it and in a horizontal line, I put the date, the month. In the vertical line, I put the numbers one to 10. 10 would be the happiest day of my life and one would be like that moment I got the phone call.” And he said, “And every night before I go to bed, I graph it. I put a dot on that day, where I was.” And he said, “Don’t look at it for three or four months.” He said, “You’ll look at it and you’ll see, put it on a graph.” He graphs it. “The downs are just as far down, but they get further and further and further apart.”

Joe Biden: (07:15)
That you’re all going to know that you’re going to make it by holding each other together. Most importantly, by holding Logan and Abigail as tightly as you can. Because as long as you have them, you’ve got Billy. As long as you have them, my prayer for all of you is that a day will come when you have that memory. And I said, you smile before you bring a tear to your eyes. I promise you, it’s going to come. It just takes a while. It takes a while. But when it comes, you’ll know, because he’s still with you. He’s still in your heart. Losing a son, daughter, brother, sister, mom, dad, it’s like losing a piece of your soul. It’s buried deep, but it comes back.

Joe Biden: (08:27)
There’s a great quote by R.G. Ingersoll. It was read when my son, who was the Chief Law Enforcement Officer in the state of Delaware and the Attorney General came back from Iraq after a year and he died. And they read this poem from RG Ingersoll, who said, “When will defies fear, when duty throws the gauntlet down to fate, one honor scorns compromise with death, this is heroism.”

Joe Biden: (09:09)
Your son, your husband, your brother, your dad was a hero and his [inaudible 00:09:19] is in your blood. My prayer for you is that moment of a smile comes before the tear, quicker, than longer. Thank you.