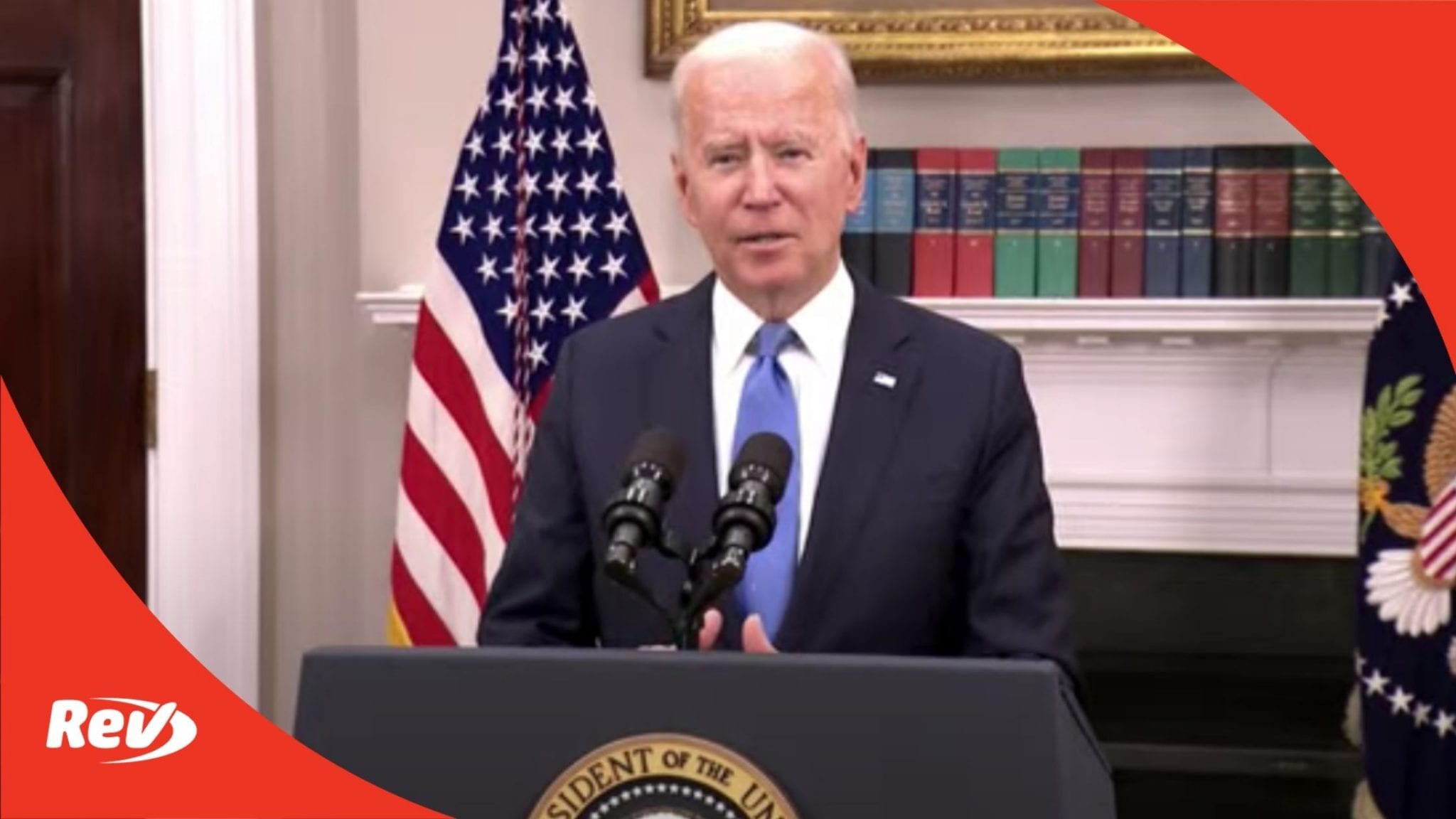 President Joe Biden gave a speech on the Colonial Pipeline cyberattack incident on May 13, 2021. He said: “We do not believe the Russian government was involved in this attack. But we do have strong reason to believe that the criminals who did the attack are living in Russia.” Read the transcript of the briefing here.

President Biden: (01:59)
Hello folks. I want to update everyone on the ransomware cyber attack that impacted on the Colonial Pipeline over this past week. As of yesterday evening, Colonial has begun restarting the flow of refined products in their pipeline. This morning, Colonial reported that fuel is beginning to flow to a majority of the markets that they service, and they should be reaching full operational capacity as we speak, as I speak to you right now. That is good news. But I want to be clear, we’ll not feel the effects at the pump immediately. This is not like flicking on a light switch. This pipeline is 5,500 miles long. It had never been fully shut down its entire history. And so fully, and now they have to safely and fully return to normal operations, and it’s going to take some time and there may be some hiccups like I just had along the way here.

President Biden: (03:11)
Still, we expect to see a region by region return to normalcy beginning this weekend and continuing in the next week. In the meantime, I want to update you on what our administration is doing to accelerate this process, to mitigate shortages and to protect you from price gouging, to protect the American people from price gouging, all those along the line. First, we relaxed the rules for pipeline operators to provide flexibility for emergency personnel, to help manually get portions of the pipeline up and running earlier this week. Secondly, over the weekend, we reviewed and work with the company to get a portion of the pipeline system from North Carolina to Maryland, to operate under manual control and deliver its existing inventory.

President Biden: (04:03)
In addition, we put in place emergency orders that lifts hours, the hours restrictions and allowed states to lift weight restrictions for tank truck drivers to be on the road. This allows those drivers to work more and carry more fuel to the affected regions. Third, the Environmental Protection Agency issued a targeted 20 day waiver of standards in several states to give fuel suppliers more flexibility to use available fuels where they’re needed, which will boost the fuel supply. And those last two actions have made tens of millions of gallons of additional fuel available each day to be able to be distributed. To put it another way, the extraordinary measures the administration has taken, we estimate sent enough gas to stations to fill the tanks over five million vehicles in the last few days.

President Biden: (05:00)
Fourthly, as part of an effort to use every possible means to accelerate fuel deliveries, last night I granted a waiver of the Jones Act to a fuel suppliers. This allows non-US flag vessels to transport refined fuel products from the Gulf of Mexico to affected areas, and we’ll grant additional waivers if necessary. These steps are temporary, but they’ll remain in place until full service is fully restored. This is a whole of government response to get more fuel, more quickly to where it’s needed and to limit the pain being felt by American customers.

President Biden: (05:41)
Now here’s what drives the driver in the states that are affected. Here’s what you can do, the drivers. Don’t panic, number one. I know seeing lines at the pumps or gas stations with no gas can be extremely stressful, but this is a temporary situation. Do not get more gas than you need in the next few days. As I said, we expect the situation to begin to improve by the weekend and into early next week, and gasoline supply is coming back online and panic buying will only slow the process. And I also want to say something to the gas stations, do not, I repeat do not try to take advantage of consumers during this time. I’m going to work with governors in the affected states to put a stop to price gouging wherever it arises. And I’m asking our federal agencies to stand ready to provide assistance to state level efforts, to monitor and address any price gouging at the pump.

President Biden: (06:43)
Nobody should be using this situation for financial gain. That’s what the hackers are trying to do. That’s what they’re about, not us. That’s not who we are. And as for the people who carried out this attack, the FBI’s released details on the attack so others can take steps to prevent from being victimized like Colonial has been. We do not believe, I emphasize, we do not believe the Russian government was involved in this attack. But we do have strong reason to believe that the criminals who did the attack are living in Russia. That’s where it came from. We’re from Russia. We have been in direct communications with Moscow about the imperative for responsible countries to take decisive action against these ransomware networks.

President Biden: (07:33)
And we’re also going to pursue a measure to disrupt their ability to operate. And our justice department has launched a new task force dedicated to prosecuting ransomware hackers to the full extent of the law. And finally, let me say that this event is providing an urgent reminder of why we need to harden our infrastructure and make it more resilient against all threats, natural and manmade. My administration is continuing to safeguard our critical infrastructure. The majority of which is privately owned and managed like Colonial Pipeline. Private entities are in charge of their own cybersecurity, and we know what they need. They need greater private sector investment in cybersecurity, and that’s why we launched a new public private initiative in April, that is focusing on strengthening cybersecurity in the electric sector for natural gas, for pipelines, as well as water systems and other lifeline sectors.

President Biden: (08:39)
And last night, I signed an executive order to improve the nation’s cybersecurity. It calls for federal agencies to work more closely with the private sector, to share information, strengthen cybersecurity practices and deploy technologies that increase reliance against cyber attacks. It outlines innovative ways the government will drive to deliver security and software, using federal buying power to jumpstart the market and improve the products that all Americans use. To assist in this urgent work of protecting our nation against cyber attacks, I’m calling on the United States Senate to move quickly to confirm Chris Inglis as our National Cyber Director and Jen Easterly to be the Director of Cybersecurity and Infrastructure Security Agency at the Department of Homeland Security. In America, we’ve seen critical infrastructure taken offline by floods, fires, storms, and criminal hackers. In Texas last month, we saw what happens when storms hit power systems that aren’t fully modernized or ready for the threats of extreme weather with tragic results.

President Biden: (10:33)
I’m willing to negotiate as I’ve indicated yesterday to the house members and to the leadership. But it’s clearer than ever that doing nothing is not an option. Again, we expect things to return to normal over the next several days. I will be monitoring Colonial’s progress and the federal government support every step of the way. So stay strong, help is on the way. We’re going to get through this as we always do as Americans and we’re going to do it together, and it’s going to be quick. God bless you all and may God protect our troops?

Speaker 2: (11:09)
Mr. President you said the hackers are believed to be living in Russia. At what point does the U.S. start to try to inflict pain on governments who allow this thing to happen in their territory?

President Biden: (11:26)
We are working to try to get to the place where we have an international standard, that governments knowing that criminal activity is happening from their territory. That we all move on those criminal enterprises. And I expect that’s one of the topics I’ll be talking about with President Putin.

President Biden: (11:57)
I am confident that I’ve read the report of the FBI accurately and they say they were not, he was not, the government was not.

Speaker 3: (12:08)
Mr. President when the executive order mentions the Colonial Pipeline directly, but the press release said it only encourages private sector companies to follow the federal government lead, which encouragement is good, but in the face of profit, it’s sketchy. So what concrete steps is the administration taking to ensure that companies are prepared and held accountable for their cyber issues, cybersecurity issues?

President Biden: (12:33)
You’ve asked three different questions in that one thing I think, as I understand it. The bottom line is that I cannot dictate that the private companies do certain things relative to cybersecurity. A lot of you are very seasoned reporters. You’ve been covering this debate up on the Capitol Hill for before I became president and unrelated to President Trump, just the debate internally among senators, as to whether or not the government should be insisting. And that gets into privacy issues and a whole range of things. So that’s going to be an ongoing negotiation. But I think it’s becoming clearer to everyone that we have to do more than being done now and the federal government can be significant value added in having that happen. Yes?

Speaker 4: (13:20)
Will you consider doing any retaliatory cyber attacks to shut down these criminals? Are you ruling that out?

Speaker 5: (13:29)
Is Prime Minister Netanyahu doing enough to stop this violence there from escalating?

President Biden: (13:35)
I had a brief conversation with him yesterday and I have my intelligence community, the Defense Department, as well as the State Department have been in contact with all of their counterparts, not only in Israel, but in the region. And one of the things that I have seen thus far is that there has not been a significant overreaction. The question is how we get to a point where, they get to a point where there is a significant reduction in the attacks, particularly the rocket attacks that are indiscriminately fired into population centers. But I expect I’ll be having some more discussions we haven’t just spoken with Israelis. The Egyptians, the Saudi and others. So, it’s a work in progress right now. So thank you all so very much.

Speaker 6: (14:53)
One more Mr. President, can we just get one more on the ransoms? Were you briefed on the fact that the company did pay the ransom?