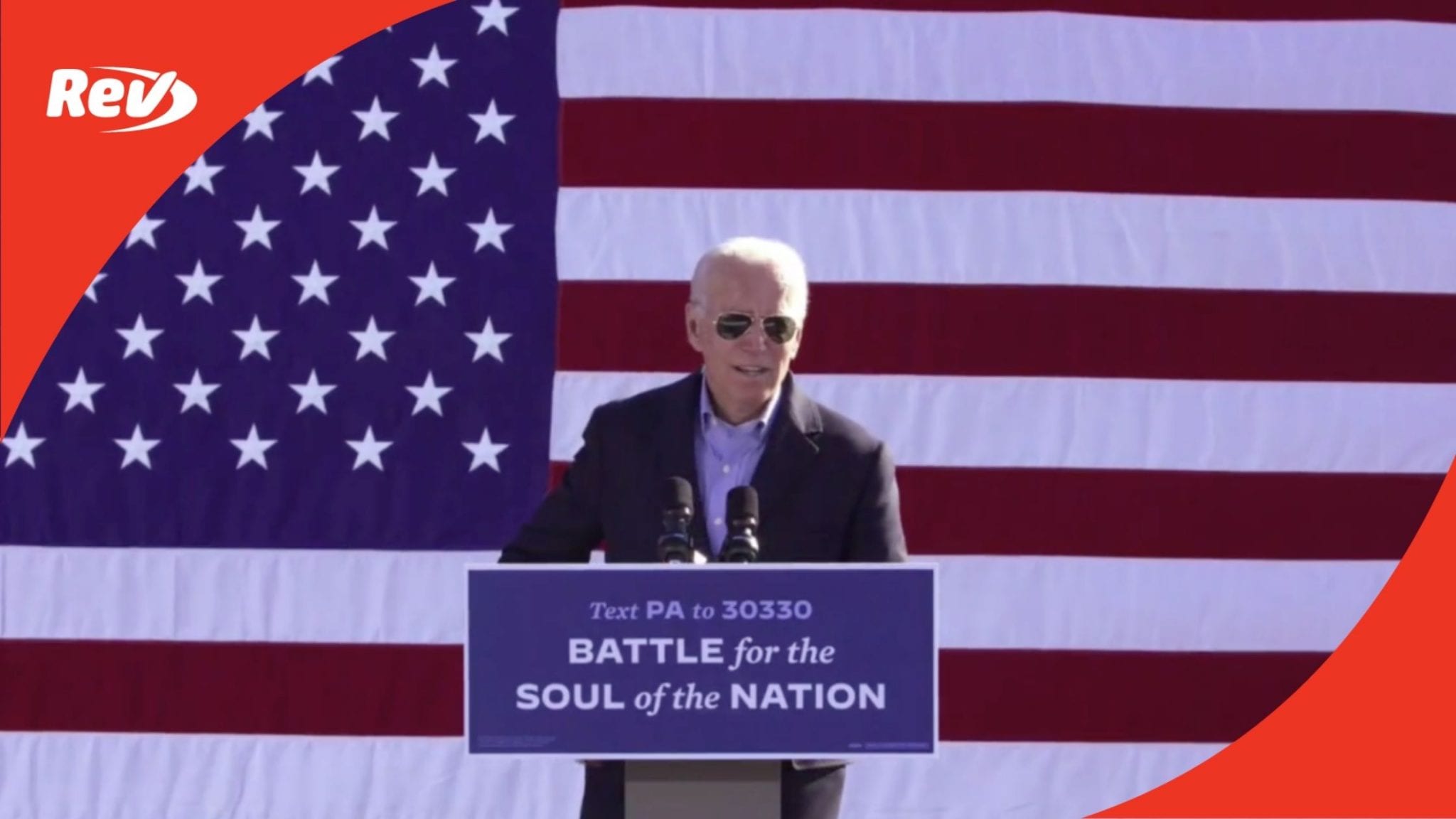 Joe Biden held a campaign event in Beaver County, Pennsylvania on November 2, the day before the election. Read the transcript of his speech remarks here.

Joe Biden: (00:00)
You all must be crazy. As my mother from Scranton said, God love you. Thanks for being here. The one thing I’ve always been able to count on my whole career, unions. I know how to say union. I’m working for those unions. Hey folks, it’s good to be back in Beaver County. The fact is that we’ve been in a situation for a while here that… and Greg, thanks for the introduction, I do appreciate it.

Joe Biden: (00:33)
One of the things about the iron workers is that I think you’re all crazy. You know what I mean? I remember iron workers endorsed me early on when I first ran for the Senate as a kid. A guy name Tommy [Shrank 00:00:47], and I used to walk in the union all the time and say anybody who’s crazy enough to walk up 16 stories on beam and shoot a rivet has to be nuts. But thank God you are. Where I grew up, you either joined a trade, you became a cop, you became a firefighter or a priest. I wasn’t competent at being any one of them, so look what happened to me.

Joe Biden: (01:06)
Folks look, Conner thank you for being here and thank you for all you’ve done. Ladies and gentlemen, this is about more than just an election this time out. There’s an awful lot at stake, and of course you’re going to send Conner back. That’s all right, I’m used to babies. Babies are allowed to cry, and anybody’s allowed to cry if they want. Anybody’s allowed to make noise too. Oh, well, look, I wanted to come by to say thank you personally. Thank you very, very much for what you’ve done. As the Mayor’s here, they tell me… I don’t know where the Mayor is. Where’s the Mayor? There you are, hey Mr. Mayor, thank you pal. Being Mayor’s a real job. They know where you live and Terry and Rob I want to thank you and everybody all over Beaver County.

Joe Biden: (02:45)
Folks, as I said, I wanted to come by and thank you personally for canvassing. And thank the Mayor and everyone else that I just mentioned to you. The fact is that there’s a lot at stake in this election. We are really at one of those inflection points. This is going to be more than just who governs the next four years. What happens now, what happens tomorrow is going to determine what this country looks like for a couple generations. And that’s not a joke. I really generally believe that.

Joe Biden: (03:13)
There’s so damn much at stake. And as we get this home stretch, you find yourself going home. At least I found myself going home. This is like home. I’m from Scranton, Pennsylvania. I grew up in Claymont, Delaware. And it used to be a steel town that had steel workers, used to have 5,800 steel workers in the town. All gone, all gone now. We got to get it back. We’re not going to get it back in Claymont, but we can get it back here in the United States.

Joe Biden: (03:44)
And folks, the fact is that as I said we’re heading to a home stretch. We know the stakes have never been higher. We know they’ve never been higher. My dad used to have an expression. He’d say, “Joey,” he lost a job in Scranton when coal died when I was a kid. And we moved on to Claymont, Delaware. He took us home to my grand pops house. And he made what I call the longest walk a mom or dad has to make. Up a short flight of stairs to the kids bedrooms to say, “Honey, I’m sorry. You can’t go back to that school. You can’t play in that Little League club anymore. Dad lost his job. We’re going to have to move. We can’t stay where we are.” And he made that walk, took us over to my grand pop’s house in Scranton and what happened was he said, “I’m going down to Delaware. There’s jobs down there. I’ll come home every weekend. It’ll probably take me a year to get one. I can bring everybody down.” And so that’s exactly what happened.

Joe Biden: (05:02)
I’ve never forgotten growing up in a hard working family in Scranton. The lesson that Donald Trump has never learned, because he can only see the world from Park Avenue. He can’t see what families like yours and mine have gone through. So he refuses to do the work to get this virus under control. He refuses to do the work to get our schools and our small businesses the resources they needed to stay open. Firefighters, teachers, cops, a whole lot of hard working folks. Refused to bring Congress together. They passed the money, but he refused to bring them together to provide for their families, the working families. Because he thinks Wall Street built this country. Well I got news for him, you already know it, Wall Street didn’t build America, middle class did and unions built the middle class. Unions built the middle class. That’s a fact. That is a natural fact.

Joe Biden: (05:56)
Look, I see the world from Scranton. I see this world from working class towns all around this state. And that’s why I build back better plan that I’m going to do is for the first time in a long time, we’re going to start rewarding work, not wealth. We’re not going to raise taxes for anybody making less than $400,000 bucks a year. If you make more than that, guess what? You’re going to start paying your fair share. You’re going to start stepping up.

Joe Biden: (06:26)
I’m going to ask the big corporations, the wealthy, to step up. 90 of the Fortune 500 companies, trying to railroad you guys, 90 of them, didn’t pay a penny in taxes. We’re going to invest the money that we collect of working people, creating millions of good paying union jobs. Two trillion dollars to build a more resilient infrastructure, roads, bridges, water systems. A whole lot more. Done by certified labor. And by the way, no matter how many times Trump tries to lie about it, I will not ban fracking. I never said I would.

Joe Biden: (07:05)
But I’m going to end Trumps incentives, to send jobs overseas. We have a trade strategy right now where you get 10% cut in your tax if you send a job overseas. We’re going to reverse it. You bring a job home, you get 10% and I want to promise you one thing, the president has control of $600 billion, handing out contracts for construction. For everything from building aircraft carriers, to public housing. Well here’s the promise I’m making to you, not one single contract will be let to a contractor who doesn’t have products that are all made in America. That’s a guarantee. Every one.

Joe Biden: (07:54)
We’re allowed to do that now, but we’ve never done it. It’s about time we stepped up and made sure people… by the way, one other thing I want to mention here. Donald Trump talks about himself as a tough guy. I grew up with guys like him around in Scranton. They thought because they had more money than us they could look down their nose at us. They thought that because they came from well known families, they somehow were better. Well let me tell you something, he talks about how tough he is, how hard working he is, how he’s done so much. Let me tell the things that bothered me most in this campaign and I have to tell you, the way he talked about our veterans as being losers, losers? What’s this guy all about? Who is he? He doesn’t understand what’s going on.

Joe Biden: (08:49)
Folks, my son was the Attorney General of Delaware. He gave up his seat to go fight in Iraq for a year. He won the Bronze Star, [inaudible 00:09:02] service medal. And he came home and he died of cancer, but he came home and guess what? He was no loser. Trump’s a loser. And all of you who served. All of you who have served. I really mean it. Think about it, think about it. Is there any wonder why… this is the first president that I’m aware of. The six top Generals to work for him, six, four star Admirals and Generals, they all left to say he wasn’t worthy of being Commander in Chief. They quit.

Joe Biden: (09:42)
McRaven, [inaudible 00:09:44] Special Forces. There are the guys who did a lot commanding. They both endorsed me and they came along, 22 Four Stars stepped up and endorsed me because they knew I’d have their back as Commander in Chief. This guy doesn’t get it.

Joe Biden: (10:06)
I really mean it, many of you served. Took physical courage to do it. He doesn’t get it. Folks, we owe the military. One percent of the Americans, are protecting the other 99% of us. We owe them big.

Joe Biden: (10:33)
Look, we can only get this done though, we can only get this done in Pennsylvania, Pennsylvanians vote. We got to make sure everybody returns their ballot or votes tomorrow. Make sure everyone, everyone you know does the same. It’s time to rebuild the backbone of this country. The middle class, and this time bring everybody along. Everybody. It’s time to unite this country. There’s an amazing thing about this moment on history; on the one hand we’re facing the biggest threat to who we are, what we believe in our lifetimes, but on the other hand our future has never been more promising.

Joe Biden: (11:22)
I’ve said it many times, I’m more optimistic about America’s future today, than when I got elected as a 29 year old kid to the Senate. Here’s why: we’re in a better position than any nation in the world to lead the 21st century. Our workers are three times productive as workers around the world. We have the biggest economy in the world. The strongest military in the history of the world. We have the most innovative entrepreneurs. We’re virtually energy independent and we have more great research universities than the rest of the world combined.

Joe Biden: (12:00)
No other nation can touch us. No other nation can lead us. We can lead by the power of our example, not just the example of our power. The only thing that can tear America apart is America itself, and that’s exactly what Donald Trump’s been trying to do from the very beginning. Divide America. Pitting American’s against one another. Rural versus urban. Based on race, gender, ethnicity, national origin, our religion. That’s wrong. That’s not who we are. Everybody knows who Donald Trump is. But we’re about honor, integrity, dignity. This is the United States of America. We’ve got to let them show who we are. We choose, we choose hope over fear. We choose unity over division. We choose science over fiction, and yeah we choose truth over lies, constant lies.

Joe Biden: (13:59)
I want to do something that I feel very proud about. The son I told you about who I lost, I want his two children to come up here with me. Come here. This is Natalie, don’t be silly.