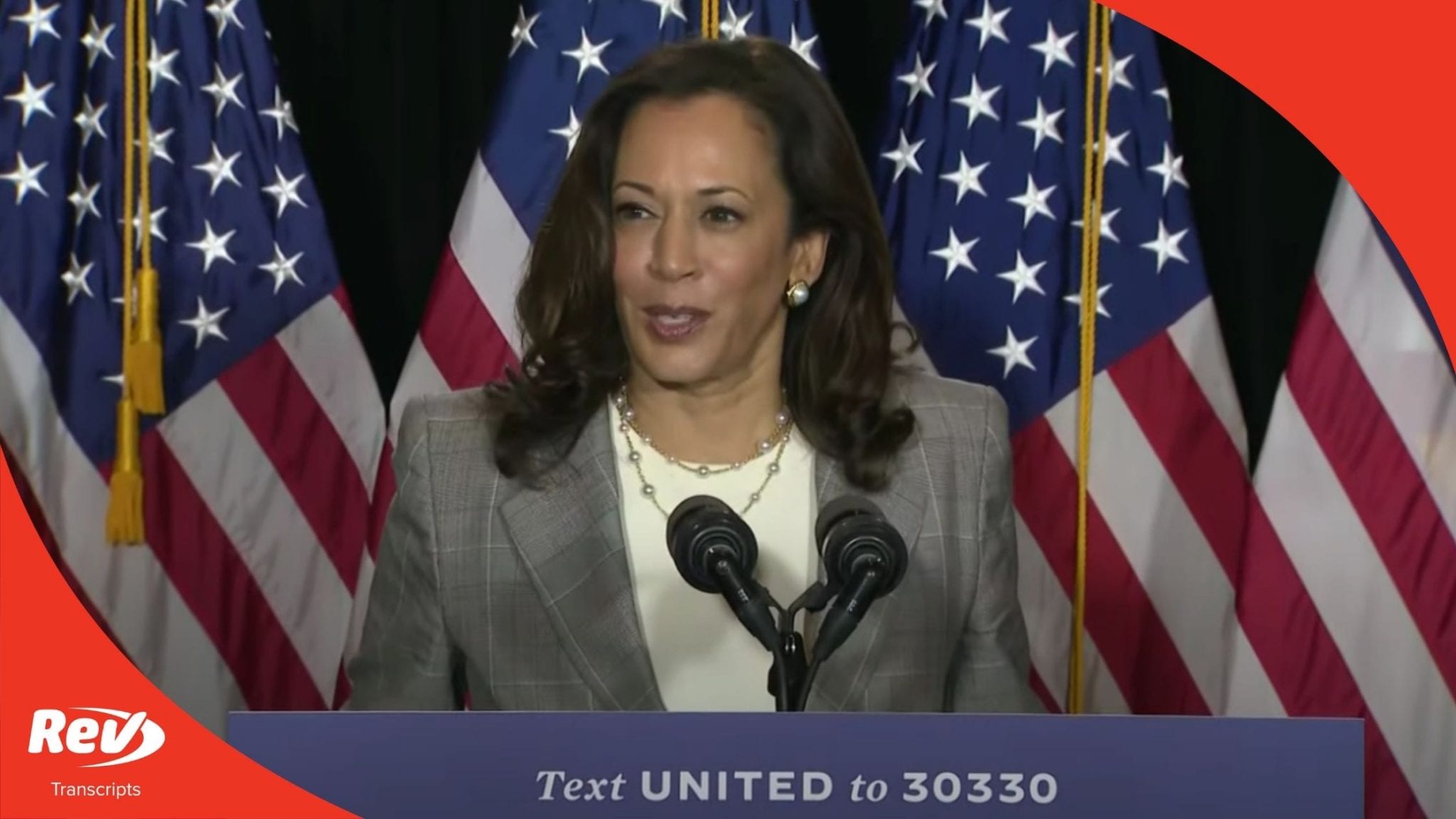 Joe Biden: (00:01)
We talked about school openings. We talked about the distribution of a vaccine, if and when one arrives, and what plans would be made for. We talked significantly about the racial disparities that exist and how COVID-19 is affecting different races differently, and we talked about the continued lack of PPE protective equipment and testing capacity and the like. I’ve put out a comprehensive plan over the last three months on each of these things, but today I want to talk about one thing. Very straightforward. Doesn’t have anything to do with Democrats, Republicans or independents. It has to do with a single simple proposition: every single American should be wearing a mask when they’re outside for the next three months at a minimum. Every governor should mandate. Every governor should mandate mandatory mask wearing. The estimates by the experts are it will save over 40,000 lives in the next three months. 40,000 lives if people act responsibly.

Joe Biden: (01:25)
And it’s not about your rights, it’s about your responsibilities as an American. The fact is that as Americans are lining up to give blood, Americans volunteer all their time for food banks and local charities, supporting their neighbors that are in need. Well, this is no different. Wearing a mask is less about you contracting the virus, although it does help depending on the mask, but it’s about preventing other people from getting sick. Wearing a mask will give the life of a clerk or your local store or your letter carrier, your child’s teacher, it will increase their prospects of not contracting the virus. Even though it’s uncomfortable, we’re not used to it, wearing a mask is going to get our kids back to school sooner and safer. Wearing a mask, every American wearing a mask outdoors, is going to get our businesses back and the full strength long-term, and we’re going to get our country back on track.

Joe Biden: (02:31)
But again, when I get occasionally confronted with a person in the public about wearing a mask, I say, “Look, this is America. Be a Patriot. Protect your fellow citizens. Protect your fellow citizens. Step up. Do the right thing. Do the right thing.” There’s overwhelming evidence that the mask and depending on the type of mask you wear increases exponentially the prospect that you, if you are a carrier and you don’t even know it, that you will not infect anyone when you cough, sneeze, sing, shout.

Joe Biden: (03:17)
A lot of people are dying. We’re up over 160,000 people dead so far. And I’ll end by saying that it goes back to the study some months ago by Columbia University saying that we didn’t have to be this way. If the president had acted sooner, just one week earlier, it would have saved 30-some-thousand lives. Two weeks earlier, I think it was 51,000 or 57,000 lives. I hope we’ve learned a lesson. Hope the president has learned a lesson, but again, this is not about Democrat, Republican or independent. It’s about saving America’s lives, so let’s Institute a mass mandate nationwide starting immediately, and we will save lives. The estimates are we’ll save over 40,000 lives in the next three months if that is done.

Kamala Harris: (04:27)
Thanks, Joe. That’s what real leadership looks like. We just witnessed real leadership, which is Joe Biden said that as a nation, we should all be wearing a mask for the next three months, because it will save lives. And the thing about Joe that the American people know is that his role of leadership in our country has always been about doing what’s best for the people of our country, best for their health, their wellbeing, and for their families. That’s what real leadership looks like. And when Joe talks about his priorities, he knows and he cares about the fact that we have as a nation witnessed 165,000 people, who just in the last few months, have died in our country. We know that those individuals represent families, loved ones, grandparents, parents, sisters and brothers, aunts and uncles of people who are mourning their loss every day, so what real leadership looks like is Joe Biden to speak up, sometimes telling us the stuff that we don’t necessarily want to hear, but we need to know.

Kamala Harris: (05:43)
And the need for this mandatory mask wearing will also be about what Joe has articulated and what a Biden-Harris administration will do in terms of creating a pandemic testing board to get tens of millions of testing kits were needed to build a public health jobs corps, hiring at least 100,000 Americans to lead us through contact tracing as soon as we take office, and to chart a clear path forward for a safe and effective vaccine and guarantee every American, every American equal access to it by investing $25 billion, which is Joe’s plan. $25 billion in manufacturing and distribution. When Joe talks about this, I think it’s important that the American people looking at the election coming up ask the current occupant of the White House, “When am I going to get vaccinated? When am I actually going to get vaccinated?” Because there may be some grand gestures offered by the current president about a vaccine, but it really doesn’t matter until you can answer the question, “When am I going to get vaccinated?” So again, Joe Biden is about real leadership in our country, and I’m honored to be with you, Joe. Thank you.