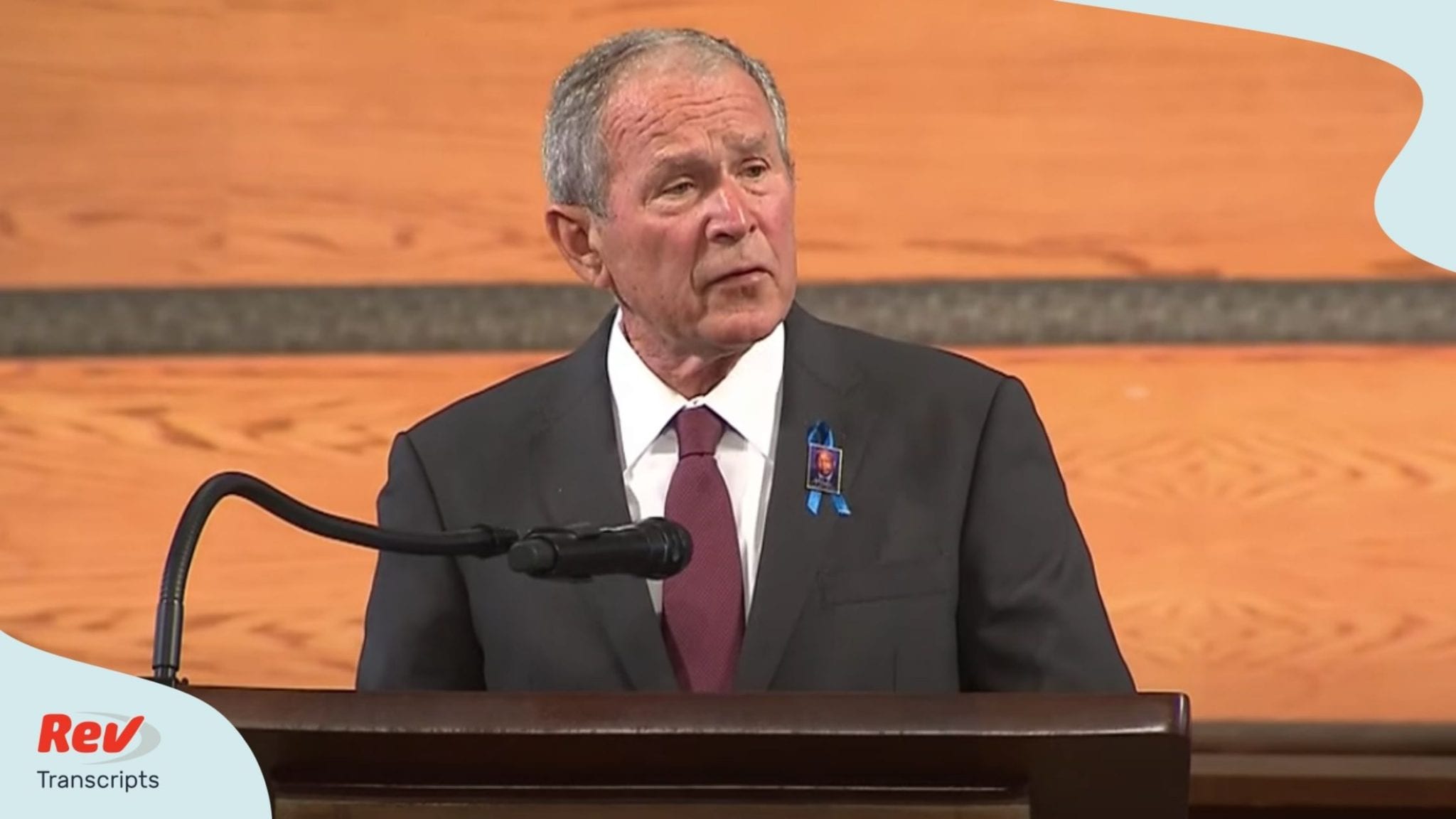 President George Bush gave a eulogy at John Lewis’ funeral on July 30. He said: “We live in a better and nobler a country today because of John Lewis and his abiding faith in the power of God, in the power of democracy, and in the power of love to lift us all to a higher ground”. Read the eulogy speech transcript here.

George W. Bush: (00:01)
Good morning. Distinguished guest, John Miles, Lewis family and friends. Lauren, I thank you for inviting us to be here today. John’s story began on a tiny farm in Troy, Alabama, place so small he said you could barely find it on the map. Dr. [inaudible 00:00:28] talked about the chickens. I did a little research. Every morning, he would rise before the sun to tend to the flock of chickens. He loved those chickens. Already called to be a minister who took care of others. John fed them and tended to their every need, even their spiritual ones, for John baptized them. He married them and he preached to them.

George W. Bush: (01:00)
When his parents claimed one from family supper, John refused to eat one of his flock. Going hungry was his first act of nonviolent protest. He also noted in later years that his first congregation of chickens listened to him more closely than some of his colleagues in Congress. John also thought that chickens were just a little more productive. “At least they produced eggs”, he said. From Troy to the sit-ins of Nashville from the Freedom riots to the March on Washington, from Freedom Summer to Selma, John Lewis always looked outward, not inward. He always thought of others. He always believed in preaching the gospel, in word and in deed, insisting that hate and fear had to be answered with love and hope. John Lewis believed in the Lord, he believed in humanity and he believed in America. He’s been called an American saint, a believer willing to give up everything, even life itself, to bear witness to the truth that drove him all his life, that we could build a world of peace and justice, harmony, and dignity, and love.

George W. Bush: (02:35)
And the first crucial step on that journey was the recognition that all people are born in the image of God and carry a spark of the divine within them. Laura and I were privileged to see that spark in John up close. We worked with him to bring the National museum of African American History and Culture to the Washington Mall. He was instrumental in the Emmett Till Unsolved Civil Rights Crimes Act which I signed to seek resolution in cases where justice had been too long denied. And we will never forget joining him in Selma, Alabama for the 50th anniversary of his march across the Edmund Pettus bridge, where we got to watch President Barack Obama thank John as one of his heroes.

George W. Bush: (03:30)
There’s a story in the old scriptures that meant a lot to John. In the Hebrew Bible, the Lord is looking for a prophet. Whom shall I send, God wonders and who will go for us? Isaiah answers, here am I, send me. John Lewis heard that call a long time ago in segregated Alabama. And he took up the work of the Lord through all his days. His lesson for us is that we must all keep ourselves open to hearing the call of love, the call of service, and the call to sacrifice for others.

George W. Bush: (04:18)
Listen, John and I had our disagreements, of course, but in the America John Lewis fought for, and the America I believe in, differences of opinion are inevitable elements and evidence of democracy in action. We, the people, including congressmen and Presidents, can have different views on how to perfect our union while sharing the conviction that our nation, however flawed, is at heart a good and noble one. We live in a better and nobler a country today because of John Lewis and his abiding faith in the power of God, in the power of democracy, and in the power of love to lift us all to a higher ground. T.

George W. Bush: (05:17)
he story that began in Troy isn’t ending here today, nor is the work. John Lewis lives forever in his Father’s house and he will live forever in the hearts of Americans who act justly, love mercy, and walk humbly with their God. May the flights of angels see John Lewis to his rest and may God bless the country he loved.