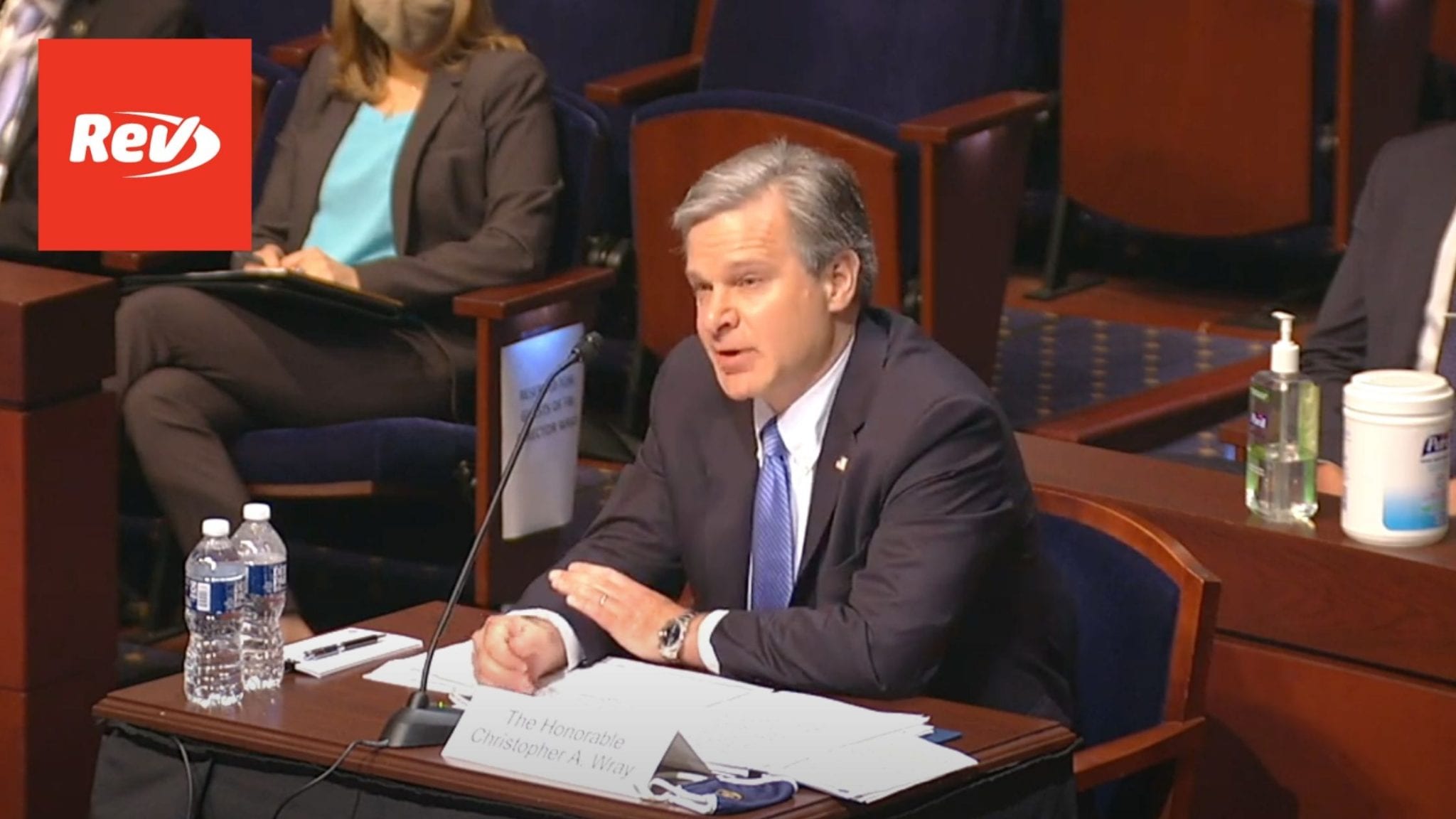 FBI Director Chris Wray gave an opening statement at a House hearing on June 10, 2021. Read the transcript of his speech remarks here.

Chris Wray: (00:00)
To the committee, thank you for this opportunity to talk about the FBI’s enduring efforts to keep the American people safe. As you know, over our almost 113-year history, the FBI has worked tirelessly alongside our trusted partners to confront a host of threats facing our country from the persistent threat posed by terrorists, both foreign and domestic, to the counterintelligence threat posed by the governments of aggressive adversaries, like China and Russia, to the scourge of violence threatening our neighborhoods, to the rising and evolving threat posed by cybercriminals who seek to hold hostage our companies and our critical infrastructure.

Chris Wray: (00:43)
I suspect we’ll be covering these and other topics today, but I’d like to start by discussing an issue that is of utmost concern to me, to you, and to all Americans, which is the prevalence of violence in our country. Over the last few years, we’ve witnessed the troubling phenomenon of people resorting to violence and destruction of property to further their ideological, political, or social goals. Far too often, we’re seeing individuals inspired by one or more extremist ideologies to commit criminal acts against their fellow Americans.

Chris Wray: (01:23)
Now, the FBI does not and should not police ideology. And we do not investigate groups or individuals based on the exercise of First Amendment-protected activity alone. But when we encounter violence and threats to public safety, the FBI will not hesitate to take appropriate action. That is not a controversial issue that should force anyone to take sides. We can all agree that violence in any form, in support of any set of beliefs cannot and will not be tolerated, because violence undermines one of the most basic freedoms of all Americans, the right to feel safe and secure in our own homes and communities.

Chris Wray: (02:10)
We saw this kind of extremist violence on January 6th when an angry mob used violence and the destruction of property to break into the US Capitol in a failed attempt to undermine our institutions of government and our democratic process, an assault where you, the members of Congress were victims, but where all Americans were victimized, and more than 100 law enforcement officers were injured in just a few hours.

Chris Wray: (02:39)
Through the dogged work of FBI agents, analysts, and professionals working alongside federal, state and local partners, we’ve been able to make close to 500 arrests so far with more sure to come. We also so saw extremist violence during last summer civil unrest. And although most citizens made their voices heard through peaceful, lawful protest, others, far too many, persistently exploited those protests to pursue violent extremist agendas. In Portland alone, hundreds of law enforcement officers sustained injuries, and damage to federal buildings was estimated in the millions of dollars. Across the country, federal, state and local authorities arrested thousands of individuals who committed criminal acts surrounding those protests, and nearly every one of the FBI’s 56 field offices opened investigations amounting to hundreds of investigations involving violent and destructive conduct.

Chris Wray: (03:42)
More recently, we’ve seen an alarming increase in hate crimes across the country, many targeting members of the Asian-American Pacific Islander and Jewish communities. In some cases, these crimes are carried out by individuals we characterized as racially and ethnically motivated violent extremists. To confront this threat, we’ve taken a multi-pronged approach focusing on our traditional investigative efforts through our civil rights program and our Domestic Terrorism-Hate Crimes Fusion Cell that we created about a year and a half ago, but also enhancing our law enforcement training, public outreach, and support to our state and local partners.

Chris Wray: (04:21)
Our efforts to stem extremist violence are on top of our continued and extensive work to disrupt violent gangs, drug organizations, and human traffickers, whose criminal acts devastate families and communities. For many of you, violent crime remains the most significant and most pernicious threat you face in your home district. And in difficult times like these, we must never forget the extraordinary bravery of our federal, state, local and tribal law enforcement members who risk life and safety every single day to protect the public and keep the peace.

Chris Wray: (05:04)
I say that because over the past year, we’ve seen a troubling uptake in violence against members of the law enforcement community. In just the first five months of 2021, 36 officers have been feloniously killed on the job. That’s far surpassing the number of by this time last year. To put that in perspective, that’s almost two law enforcement officers shot and killed every week, and that’s not counting all those officers who’ve died in the line of duty facing the countless other inherent dangers of the job, like racing in pursuit of a suspect, and dying in a car accident, or drowning in an attempted rescue, or even the scores of officers who have died from COVID-19, because law enforcement, of course, kept coming to work every day, right through the teeth of the pandemic, nor is it counting all those officers who’ve been badly injured, but thankfully, survived, but whose lives and whose familys’ lives have been forever changed.

Chris Wray: (06:06)
Now, the loss of any agent or officer is heartbreaking for their families, for their departments, for their communities that they serve. We in the FBI know that all too well with the terrible, terrible loss of Special Agents, Laura Schwarzenberger and Dan Alfin this past February, shot and killed down here in Miami. Each one of the officers and the agents we’ve lost this year were people who got up one morning, picked up their badge, not knowing whether they’d make it home that night. And they did their jobs despite all the hardships they’ve faced in this almost epically difficult year, because they were devoted to protecting their fellow Americans, old friends and strangers alike. And we owe these dedicated public servants a debt of gratitude. More than that, we owe them our best efforts to help stem the tide of violence.

Chris Wray: (07:04)
All of us here today have a shared responsibility to take a stand to protect our communities, to support those who serve in law enforcement, and to condemn violence, regardless of its motivation. And we in the FBI are ready to do that exactly, to use all the tools at our disposal to uphold the rule of law, and to fulfill our mission to protect every American, because there is simply no place in this country for hatred, intolerance, or violence, regardless of its motivation, ideology, or otherwise.

Chris Wray: (07:39)
Thank you for taking the time to hear from me today. I look forward to answering your questions.