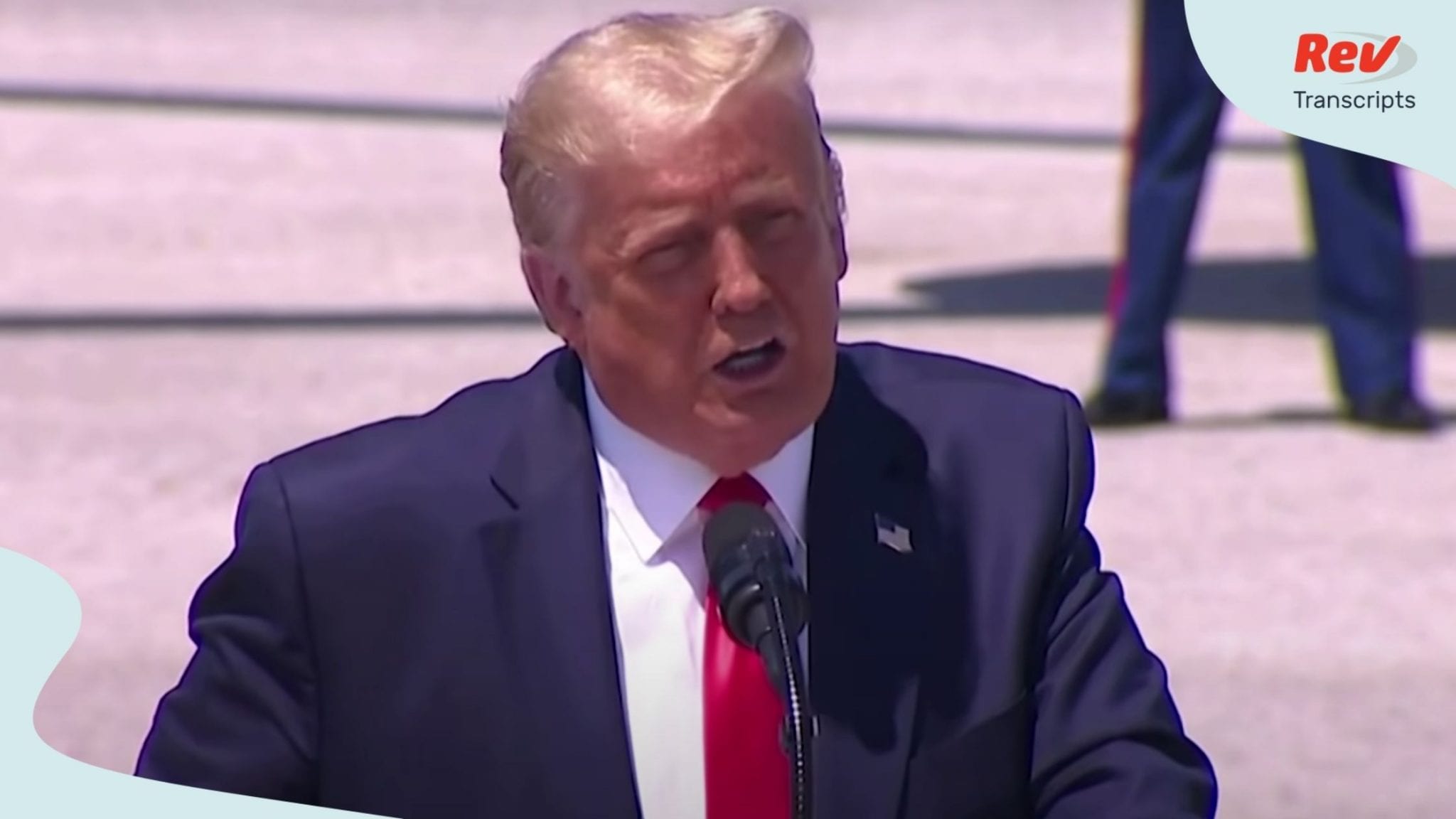 Donald Trump spoke to the press at the airport in Cleveland, Ohio on August 6. He said of Joe Biden: “He’s following the radical left agenda. Take away your guns. Destroy your second amendment. No religion, no anything. Hurt the Bible, hurt God. He’s against God”. Read the transcript here.

President Donald Trump: (00:00)
… number that you can have, and that’s all we’re allowed. So you’re a very special group, and thank you all for coming out here. Thank you, thank you. So I’m thrilled to be back in Ohio, and proud of the hardworking patriots of the Buckeye State. Four years ago, I came here, right in here. That was an amazing four years ago, wasn’t it, when you think how time flies? Right here in Cleveland, to accept the Republican nomination for President of the United States. And we’ve worked hard and we’ve done some job, and they’re finally starting to recognize it, they’ll see. You know when they’re going to recognize it? On November 3rd, that’s when they’re going to recognize it. Three months from now on November 3rd, we will once again win the State of Ohio like we did last time. I just spoke to Bob Paduchik and he says we’re doing better than we did last time, and I think we won it by almost nine points. He said we’re doing better than last time. Thank you, Bob.

President Donald Trump: (01:14)
We’re looking forward to really … I mean, look. We’re running against radical left ideology. Their messenger is Sleepy Joe. He doesn’t know it’s his message, he has no idea what the message is. But he’s going to do whatever they tell him to do, you know it, because he’s not all there. I want to just say that a very good friend of mine just tested positive, do you know that? Our great governor. Governor of Ohio, DeWine, just tested positive just here. And we want to wish him the best. He’ll be fine. I guess he’s going for a secondary test. I just said, “I look forward to seeing the governor.” They said, ” Sir, he just tested positive.” But he’s a great guy, he’s done a fantastic job. And your lieutenant governor, Jon Husted, is here some place. John, hi, John. Thank you, John, very much.

President Donald Trump: (02:04)
Also, House speaker, Bob Cupp. Thank you, Bob. Thanks, Bob. Republican candidate for Ohio’s 13th district, Christina Hagan. Christina, come here. Come up here, John, just come up here. Bob, come up here. Come on up here. Because I don’t know if they hear me with these crazy speakers, but whatever. Just social-distance, Christina. Right there, Christina. So listen, you have a guy, really, he is so terrible, Tim Ryan. This woman is incredible. You got to let her win. Tim Ryan, he talks and he talks and he talks, gets nothing done. I mean, we have to beat this. He only talks about jobs. He does nothing. We have in Christina, an incredible candidate, incredible in every way. She will work so hard for you. Tim Ryan goes out, he runs for President. He got zero, zero, zero, zero. All talk.

President Donald Trump: (03:15)
So I hope, Christina, they’re going to put you there. You have my complete and total endorsement, and that’s meant a lot. That’s meant a lot. I think it’s about 244 to two or three or something. I don’t want you to be number four, okay? You’re going to get it. I promise you’re doing a great job. We appreciate it. Say hello to the governor too, but we’ll finish this up. Thank you very much. Christina, thank you very much. Good luck. We’re with you all they way, Christina. We got to win. Also we have our Republican party chairwoman, Lisa Stickan. Lisa, hi, Lisa. Thank you, Lisa. Great job you’re doing, thank you. Are we doing good, Lisa? Good.

President Donald Trump: (04:02)
And we have, as you know, Gene Scalia. Good blood line, Gene Scalia. There he is. And Bob Paduchik, who was with me from day one in Ohio, and he has done a fantastic job. So I’ve come to visit the workers of a great state and a great American company, Whirlpool. They had a lot of problems until I got involved, and now they’re doing great. It’s the largest washing machine manufacturing facility in the world. It’s in Clyde, Ohio. You know that, that’s where I’m going. Under the last administration, the men and women of Whirlpool saw their job and factories targeted for destruction and yet … You know the story, right? Vice President Biden, he’s a real beauty. He let it happen. Foreign made washing machines were dumped in our market below cost, in order to put Whirlpool out of business.

President Donald Trump: (04:59)
And yet the Obama administration, with Joe Biden watching over, freely allowed this grave injustice to continue. They let other countries pillage American jobs, lay waste to American communities and eviscerate American middle class. So they allowed things to happen, which should never have happened to you, and we brought it back. And you know that. We have brought it back. Under my administration, all of that has changed. We stood up to the foreign cheaters. We defended American jobs. We imposed massive tariffs on foreign washing machines and we saved the workers of Whirlpool. In every thing we do, we are finally putting America first. That’s right.

President Donald Trump: (05:51)
During Joe Biden’s five decades in Washington … Think of it. He’s been in public office for 47 years. He’s done nothing, now he’s going to fix everything. It doesn’t work that way. And I wouldn’t say he’s at the top of his game, would you? You think? But he supported every single globalist attack on American workers. Joe Biden’s policies put China first and America last, and that’s what he’ll continue to do, if he ever got this shot. And you will have a disruption in the market, the likes of which our country has never seen. You will have a crash in the markets, because he’s going double and triple your taxes. He’s going to do things that nobody ever would ever think even possible. Because he’s following the radical left agenda. Take away your guns. Destroy your second amendment. No religion, no anything. Hurt the Bible, hurt God. He’s against God. He’s against guns. He’s against energy, our kind of energy.

President Donald Trump: (07:52)
I’ve been given more credit for that maybe than anything. It gave you back your rights. It gave you back your freedom. I canceled the so called Clean Power Plan, withdrew the United States from unfair Paris climate accord, which was costing us a fortune, which was meant against us, which was pitted against us. And ended the war on American energy. We’re now number one in the world in energy, energy production. We renegotiated the Korean trade deal, which was a disaster. I imported and came in with what we took into our country and then put out. But most importantly, I opposed historic tariffs on China, and stood up to China’s rampant trading abuses. They had the worst year in 67 years. We had the best year we’ve ever had. And now we’re going back to that again.

President Donald Trump: (08:52)
And then of course, I passed the largest tax cuts in the history of our country and the largest regulation cuts in the history of our country. We got rid of all of those job killing regulations. And that’s one of the reasons that not only did we do well, but we’re doing well. And you’ll see numbers coming out, they’re coming out very well. Including, look at the stock market. We’re almost at an all time high. And NASDAQ, a month ago, just hit the highest it’s ever been. So to me, that means jobs. One of the things I did in Lima … Do you know Lima? We saved your tank plant. And I came in and it was gone, and I said, “Give me a tour of the tank plant.” And we went to Lima. I looked at it, I said, “Supposed we need tanks?” “Well, I guess we have to buy them overseas.” That’s no good. And I said, “I canceled the order to…” I saved it. And now is doing business like it’s never done before and I’m very proud. That was a very personal thing for me.

President Donald Trump: (09:58)
I’m pretty good at this stuff. When I went through that plant, I said, “You can’t rebuild this. And more importantly, you’ll never get people that can build. They’re very, very complicated and complex.” And I said, “You’ll never get people to do this job again.” So I just want to thank you, you’ve been with me, all of you, from the beginning. I want to thank you. We’re taking a helicopter ride. You know where we’re going, over to Whirlpool. But I wanted to thank you. I wanted to say you’re a very special group of people. We’re going to win bigger in Ohio now than we did four years ago. And we’re very proud of what we’ve done. We built the greatest economy in the history of the world, better than any other nation by far. And then the plague was released by China. Whether it was incompetent or other reasons, it got out. It didn’t get out to China, but it got out to the US, and to Europe and a lot of other countries, 188 countries. And we will not forget that. We will not be forgetting that.

President Donald Trump: (11:02)
But now, we’re rebuilding. We closed it. We saved millions of lives, and now we’re reopening. We want our schools open. We want our buildings open, our office buildings open. We want to get back to business and we’re doing it. And it’s looking more and more like just as I predicted, it’s going to be V. Did you see yesterday? Auto production, one of the highest numbers they’ve ever seen. Used car sales, one of the highest numbers, I think the highest number they’ve ever seen. Those are big numbers. So we’re doing really well. We’re going to have a tremendous third quarter, but we’re going to have a fantastic next year. Ohio, I love you and I love all of these incredible workers. Thank you. Right from the beginning, thank you…