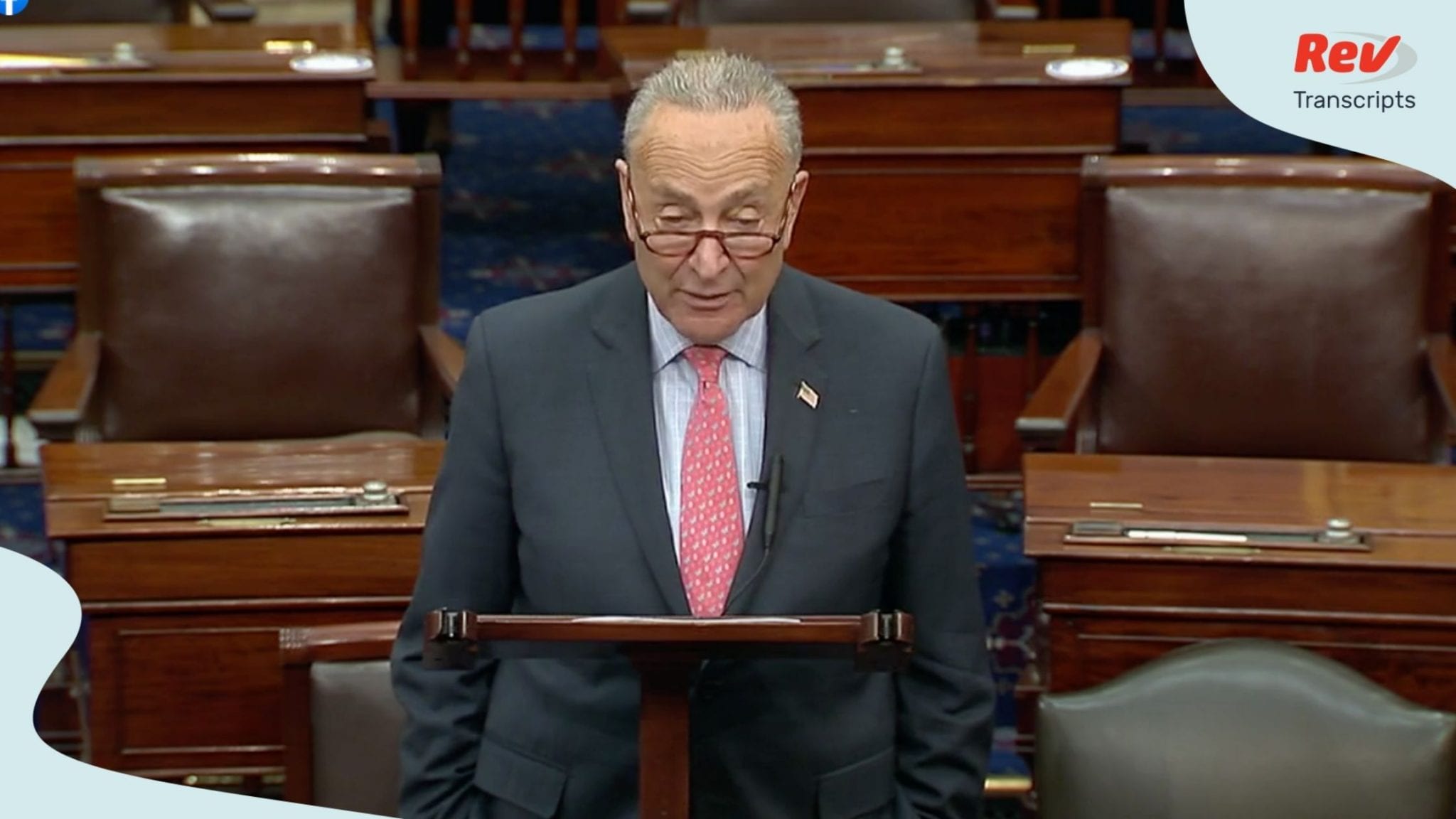 Senate Minority Leader Chuck Schumer spoke on the Senate floor on August 11 about coronavirus and concerns with the US Postal Service. He said: “We need to institute policies and devote resources to make sure every American can vote safely and confidently in person and by mail”. Read the transcript of the speech here.

Chuck Schumer: (00:00)
That exceeds anything we’ve seen in generations. Other countries were able to test their populations, isolate cases, and contain the spread of the disease, but here, the failure of the Trump administration to develop or implement a national strategy to defeat COVID on the health front and economically has meant that the disease has raged through our country for seven months, is still spreading, and the economy is in very bad shape. We have over five million confirmed cases of COVID-19. It just took 17 days to go from four million Americans with COVID to five million. Unemployment is higher than it ever was during the Great Recession. More than 150,000 Americans have died. Small businesses every day are closing and those that are still open are struggling. Families can’t afford to feed their children. Americans can’t pay the rent and will be thrown out of their homes. Millions are out of work and many more worry that they will be out of work in the month or two to come.

Chuck Schumer: (01:12)
This is a huge crisis. In this time of national emergency, Democrats believe we must focus on the health and economic security of the American people. If we don’t address the health crisis, nothing else will matter, but we have to focus on economic security as well. We have to keep Americans in their homes, put food on the table, prevent them from slipping into further hardship and poverty. That’s what animated Democrats to develop a $3.4 trillion plan to finally crush the virus and rescue American families. It was based on the needs of our country, both health and economic. The needs of our schools and businesses and workers in our healthcare system. We Democrats tell America, we have your back. Unfortunately, our Republican friends do not.

Chuck Schumer: (02:13)
In our negotiations with the White House, Chief of Staff Meadows and Secretary Mnuchin were unable to go above $1 trillion and their trillion was far short of the country’s needs. Democrats offered to come down by a trillion. We asked our counterparts, Secretary Mnuchin, Mr. Meadows, to come up by a trillion. Meet us in the middle, they said no. So last Friday, after our negotiating session with the White House, I made it clear that the reasons our talks had stalled was that the White House had basically declared “my way or the high way.” They were unwilling to meet us in the middle. They said that in the room. Well, I guess imitation is the sincerest form of flattery because now Leader McConnell is blaming Democrats for the breakdown in negotiations, using the exact same language. He said Democrats are the ones saying my way or the high way. Seriously, that’s what the Republican leader who wasn’t even in the room and won’t dare go in the room claims.

Chuck Schumer: (03:26)
Let’s go over the facts. We said to the White House we’re willing to come down by a trillion, will you come up by a trillion and meet us in the middle? The White House said no, we are not budging, so to whom does this logic apply? Who is intransigent? Who is really saying my way or the high way? The answer is obvious. This is not a both sides to blame situation. Democrats are willing to compromise, Republicans are being intransigent and will not move from their position which is totally inadequate for the needs of America at the greatest economic crisis we have had in 75 years and the greatest health crisis in 100. That is where we are. Democrats willing to move and meet in the middle, Republicans intransigent. Republicans declared my way or the high way, and rather than defend their position, they falsely accuse Democrats of doing the same.

Chuck Schumer: (04:33)
Now rather than trying to break the logjam as a true presidential leader should, President Trump sits on the sidelines and just issued a bunch of weak and unworkable executive orders. He slashed the enhanced unemployment benefits, asking Americans who are out of work through no fault of their own to take a pay cut. He deferred the payroll tax, which even Republicans admit would do next to nothing to help our workers or the economy and would undermine Social Security and Medicare to boot, and the president’s executive order on evictions is more like an executive suggestion. It doesn’t even guarantee a moratorium on evictions. It merely instructs federal agencies to “review or consider one” and does nothing to help renters actually afford the rent. Here in Congress, the Senate Republican majority delayed for four long months, failed to come up with a proposal that had the support of their own caucus, and then gave up and left it for someone else to figure it out. That’s why McConnell is not in the room. Facing the greatest domestic crisis of the 21st century, where Americans are hurting, healthwise and economically, the Senate Republican majority ran down the clock, tossed up an air ball, and then subbed themselves out of the game.

Chuck Schumer: (06:00)
Even now as Leader McConnell claims that Democrats are blocking relief, there are 20 members of the Republican caucus, according to their own leader, who won’t vote for anything. No more relief. A group of Republican senators came to the floor last week to warn America about the national debt. Not the health crisis, not the economic crisis, not the looming housing crisis, but the national debt. Something that concerned those same members very little when adding nearly $2 trillion to the debt in order to give big corporations a giant tax cut in 2017.

Chuck Schumer: (07:32)
This is not both sides. This is one side only. When President Trump called COVID-19 a hoax and told the country to go take bleach and other quack medicine, some of my friends here made disappointed noises, but when the president said that the virus would just disappear, it seems the Republican Senate bought it. After we came together to pass the CARES Act, Republican senators pushed all their chips to the middle to bet with President Trump that the virus was going to miraculously disappear. The Republican leader said I’m going to put the Senate on pause and see what happens. Last week, he actually defended that position, saying that his delay allowed us to learn the coronavirus didn’t mysteriously disappear. Millions more people out of work, hundreds of thousands of small businesses closing, many more people getting COVID and some more people dying, and now, after all that, the Republican leader says his delay allowed us to learn the coronavirus didn’t mysteriously disappear.

Chuck Schumer: (08:54)
So while President Trump and his aides have certainly been an impediment, an awful impediment, to an agreement, the Republican Senate is equally culpable, and the American people know it. They know Democrats have their back, health-wise, economically. Republicans, so many of them are saying don’t do a thing. Don’t do a thing. They’re glad the negotiations have broken down. We are not.

Chuck Schumer: (09:25)
One final matter. Millions of Americans rely on the U.S. Postal Service to deliver their mail reliably and on time, and for decades, the hardworking people of the Postal Service have been doing just that. During this pandemic, USPS has been providing these critical services day in and day out, up until the new postmaster general, Mr. DeJoy, a top Republican donor and Trump ally with no experience in the postal service, was installed at the helm. Administering a national election is difficult in normal times. In the time of COVID, it will undoubtedly be an even greater challenge. We need to institute policies and devote resources to make sure every American can vote safely and confidently in person and by mail, and by the way, even just as important, we need to make sure Americans get their medicines on time, that the elderly and those with pre-existing conditions who are staying in their homes and not going out or able to get the necessities by the mail. Your pills are a week late, I know what that’s like, it’s happened to me. Fortunately I don’t have medicines that my life depends on, it causes you huge anxiety about your health and this postmaster is cutting overtime, cutting employees, when at a time of COVID, we need more help, not less.

Chuck Schumer: (10:56)
But elections should certainly concern Americans as well. The current issues at the post office alarm every American. The new postmaster general has instituted policies that have contributed to inexcusable delays in mail delivery, but now, topping the cake, the Postal Service has informed some states they may need to pay a first class rate to deliver ballots rather than the normal rate, nearly tripling the cost at a time when people will have to vote by mail in record numbers because they can’t or won’t go vote in person. The postmaster general is saying we should triple the rate of cost to vote by mail? What a despicable derogation of democracy. What is his rationale? It’s a small amount of money. Ballots are a small percentage of the mail that’s delivered. It’s to discourage people from voting. He ought to be ashamed of himself to even consider this. Tripling, tripling what it costs to vote by mail at a time when more people will vote by mail than ever before. If anyone had any thought that this postmaster general was on the level, it’s now dispensed.

Chuck Schumer: (12:26)
To triple the cost of voting by mail would be an outrageous and insidious policy that would make it even harder and more expensive for states, already struggling with depleted budgets from COVID-19, to conduct our elections safely. Democrats will fight this policy with every tool at our disposal. If our Republicans colleagues care about a free and fair election this November, they should as well. I yield the floor.