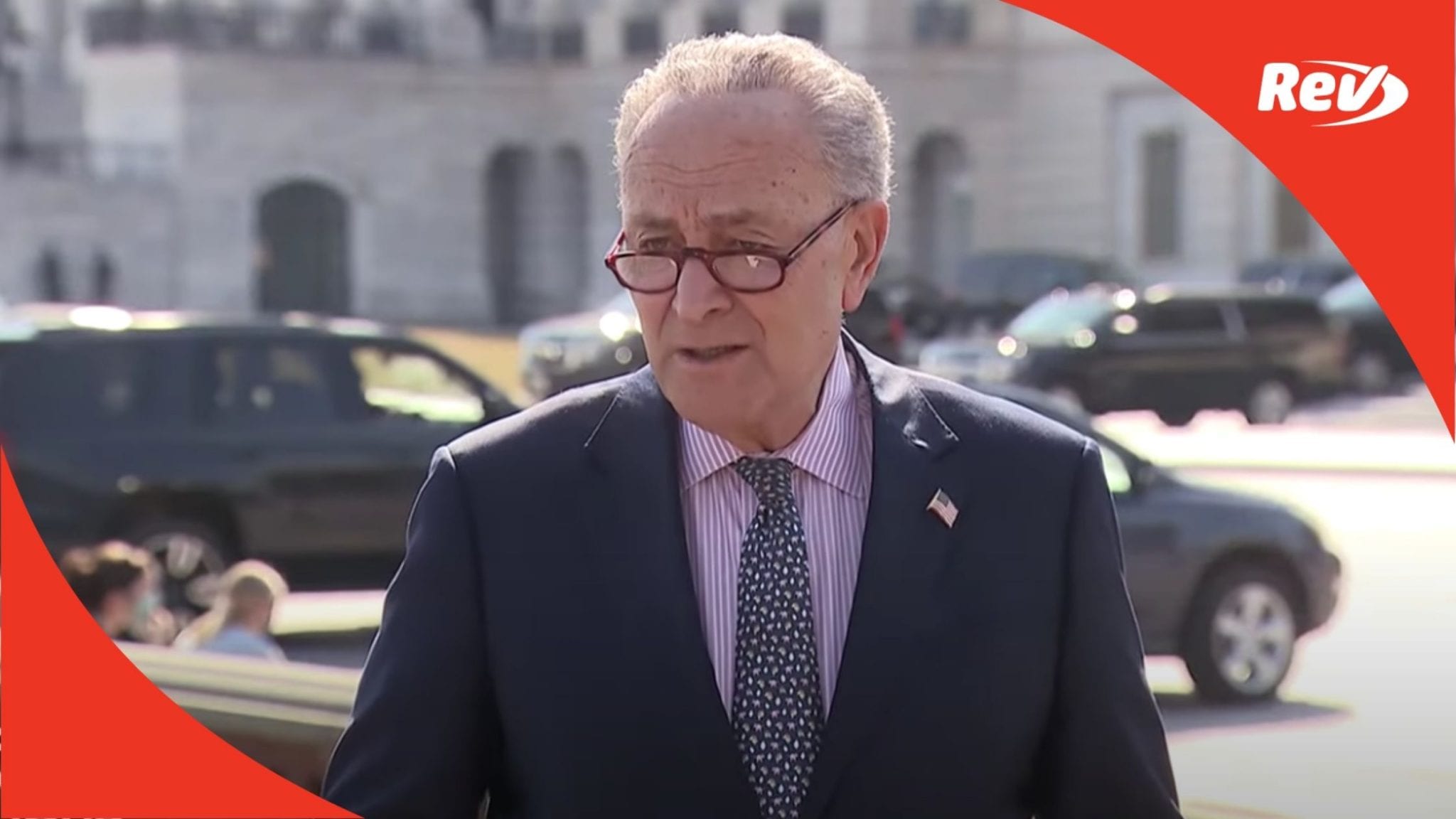 Chuck Schumer: (00:01)
Well, welcome to summer. And when we came over here, we were singing summer songs, including, and I don’t remember who sang it, so this is a press quiz. Who sang summertime? Summertime, summertime, sum, sum, summertime, sum. Ooh, Beach Boys. No.

Chuck Schumer: (00:22)
Okay. Anyway. All right, well thank you and Democrats, we are really proud of the American Rescue Plan that will be headed to President Biden’s desk later this week. This is one of the most significant pieces of legislation passed in decades. It will do more to help the middle-class, poor people, and people struggling to get into the middle-class than any bill in a very long time.

Chuck Schumer: (01:37)
Contrast this to what the Republicans did. They passed a bill of about the same size, $1.7 trillion, that went primarily for the very wealthy and the biggest corporations in America did virtually nothing to help middle-class people. And we believe that this will show the American people that we can get things done to make their lives better.

Chuck Schumer: (02:03)
This is the broadest most comprehensive bill to help the middle class that’s come along in decades. It goes where the needs are the greatest. We’re going to keep working to continue to pass big bold legislation that makes American people’s lives better. Why did so many people turn to a man who was a liar, a demagogue, a bigot with authoritarian personality? Well, many of them lost hope that a positive government can help them. We are in the act and in the process of restoring that hope. And we think it will have significant consequences for the American people economically, politically, and even going to their faith in government.

Dick Durbin: (02:53)
I’d like to beg your indulgence to say something that’s slightly off topic to start with. We can never erase the sad memory of what happened to Judge Merrick Garland five years ago in the United States Senate. But we can give this remarkable man an opportunity to write a new chapter of public service in his life. Within the hour, we will do that. Merrick Garland is the right man for this moment in the history of the Department of Justice.

Dick Durbin: (03:21)
On topic, I thought that the healthcare plan sponsored by President Obama was my most important vote when it came to domestic issues in the time I served in Congress, but in passing the American Rescue Plan, we make the most dramatic change in America in modern times with this legislation. This is historic.

Dick Durbin: (05:12)
When I think of all the Trump administration plans I voted for last year, the CARES act, which passed unanimously 96 to nothing and the December Relief Act under the Trump administration that passed 92 to six, it was a question of serving this country by supporting a plan endorsed by Donald Trump and not a single Democrat voted no. So when it came time to return the favor and have the Republicans stand with the new Democratic administration, it is said that not a single Senate Republican voted yes. Senate Democrats will continue to listen to the American people and public health experts as we work to put this pandemic behind us. After Saturday, the Republicans have to decide whether they want to sit on the sidelines or join us in governing this nation.

Speaker 4: (06:09)
Thank you. Nearly a year ago to the date since COVID-19 was declared a pandemic and despite complete opposition among Republicans in Congress, we’re about to get the kind of help to people they have been saying they need all along. We will get help to get vaccines out to communities and in arms faster, more equitably. We’ll direct resources specifically to communities of color, people with disabilities, tribes, and hard to reach communities who’ve experienced the worst of this pandemic. Schools will get their desperately needed resources to get students back in the classroom for in-person learning safely. Working parents will get help to afford childcare and more childcare providers will be able to stay open. The small businesses we all know and love in our communities will get support to weather this storm. More than 1 million workers and retirees nationwide, including 182,000 people in my home state of Washington will no longer have to worry about losing their hard earned retirement benefits. And people across the country who have struggled the most with the economic consequences of this pandemic will get direct payments, tax relief, and unemployment benefits to ease these impossibly tough times.

Speaker 4: (07:39)
Too often during this pandemic, the message people have gotten from the federal government is you’re on your own. Whether you’re a teacher, a worker at a meat packing plant, or a governor trying to avoid having to fight for resources with other states, but the American Rescue Plan says, let’s make sure we can all get through this. Let’s make sure no one is left behind. To families in Washington state and across this country, help is finally on the way and Democrats are going to get this done and continue the long work ahead to build back stronger and fairer from this crisis. Thank you.

Speaker 5: (08:23)
First, I’d like to take a moment and say thank you to Senator Schumer. We have all been involved in putting this together, but Senator Schumer was the glue holding all of us together and working incredibly hard. And one of the things that we’re so proud of is that when we come together, all of us as Democrats working with President Biden, working with our House Democratic colleagues, we are doing big, important things to help the American people. And the difference is this is about people. This is about people first.

Speaker 5: (08:56)
My colleagues have gone through what is in this, but in addition to me, this is the contrast between who and what Republicans care about and who, and what we care about. When the Republicans were in control of the House and Senate and the presidency, they passed a $2 trillion tax cut for the wealthiest and most well-connected people in our country. When we’re now in the same position, our priority is to cut child poverty in half with a different kind of tax cut. Tax cuts are in this bill, but the tax cuts in this bill will lift people out of poverty and make sure people have a fair shot to succeed.

Speaker 5: (09:43)
Very first thing the Republicans tried to do in 2017 was take away the healthcare of tens of millions of Americans. This proposal increases the capacity for people to get healthcare through the Affordable Care Act and for their employer based insurance like COBRA. It allows them to be able to get the vaccines and the healthcare they need. Very different version, very different vision of what we think is important.

Speaker 5: (10:11)
And I would urge you to take a look at the 505 amendments that were offered. Not all of them voted on, but that were offered by Republicans, that systematically said what they believe and what their values are. There were four amendments alone to cut WIC, Women, Infant, and Children, which is literally taking food out of the mouths of babies. There was an amendment to take away the pension protections for millions of Americans right now who did nothing, but follow the rules and want to have dignity in retirement of a pension. There were amendments to cut police and firefighters and the COVID response locally. They voted to take that away. They voted to take away help for all of the efforts to keep people in their homes and to allow them to have the support they need to get through this pandemic. And they were willing to vote against the efforts to get our kids back in school safely.

Speaker 5: (11:13)
So there’s a big difference. It’s not just the bill, which is incredible. It’s the value statement about what we believe in and what they believe in and who we’re willing to fight for. And those are the folks we’re going to continue to fight for as we go forward.

Chuck Schumer: (11:30)
Thank you, [inaudible 00:11:32], questions. We’ll start here and work our way over. Start with the women first. Fellas. It’s like a Jewish synagogue where the women sit on one side. Go ahead. They’re smarter as always. Well then we’ll have to go over.

Speaker 6: (11:56)
So the aid that went out in December, there’s quite a lot of it that has still not gone out. Rental assistance, [inaudible 00:12:01] that you were instrumental in there. There’s even more now you’re putting in for a restaurant fund agencies like [inaudible 00:12:08]. If you’re having trouble standing up these programs, what are you doing to ensure that [inaudible 00:12:13] would get out the door?

Chuck Schumer: (12:15)
I’ve been talking to both the cabinet level officials, both in and out. I’ve talked to the SBA administrator to try and speed this up as quickly as possible. We want to do it well, but we want to get it out there quickly. And they’re working very hard to get the monies out. Now, we don’t want to make the same mistakes. Like the first PPP went to the big boys and big girls and didn’t go to the average person because it wasn’t done carefully enough, but this administration has all the right priorities and wants the money to go to the people who need it the most. And they’re working very quickly to get the money out.

Speaker 7: (12:54)
Now with COVID relief [inaudible 00:12:55] you’re making good progress on the cabinet nominations. What is your next legislative agenda item for the floor?

Chuck Schumer: (13:01)
Well, we have a lot of things we want to get done. Obviously The Build Back Better Bill is important. Obviously doing something about China’s important. Obviously many of the bills House has sent over are important and our first priority is to fill up the president’s cabinet. We’re making good progress this week and next week. And then we will decide on the next few things to go forward on.

Chuck Schumer: (13:35)
Here’s what the caucus believes firmly. And I think it’s all of us. We need a big bold agenda, just like we passed last Saturday, but on many other areas as well. And we’re going to do everything we can to get that bold agenda done. We want to work with Republicans, any Republicans we can, and we hope they’ll work with us, but job number one, get that bold agenda done. So if Republicans won’t join us in that, our caucus is going to come together and figure out the next steps. As I’ve said, many times before everything’s on the table,

Chuck Schumer: (14:17)
If it needs to be extended beyond March 31st, it’s something I would support and hopefully we can get strong bi-partisan support and just extend it.

Chuck Schumer: (14:36)
Well, look again, as I said, big bold agenda is job number one. Everything is on the table. We will sit down as a caucus and figure out what to do if our Republican colleagues won’t join us.

Chuck Schumer: (14:48)
I work with everybody. I get along very well with Senator Manchin. We don’t agree on some things, but we always talk to each other.

Chuck Schumer: (15:00)
Look, as I said, our number one job is to pass a big bold agenda and we’ll work with any Republican we can to get that done.

Chuck Schumer: (15:30)
We’re going to work with every Republican we can to get a big, bold agenda done. Thank you everybody.