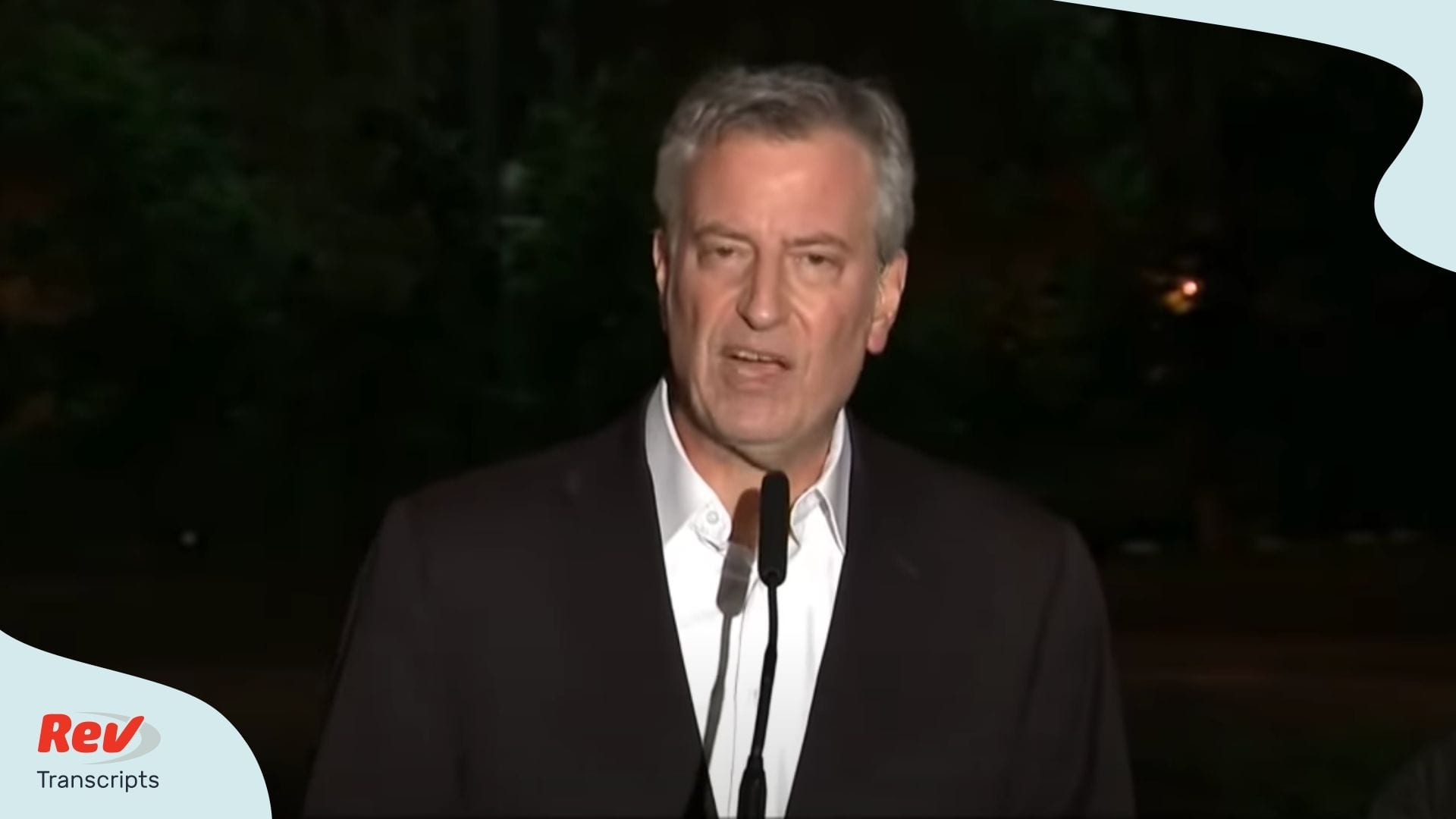 Mayor Bill de Blasio of New York City gave a statement on the night of May 30 during protests. Read the full transcript of his speech here.

Mayor Bill de Blasio: (00:00)
… In this city, except for a very few individuals. New Yorkers have expressed their desire to address real issues, and to address them the right way. And that’s the peaceful protesters who have been out today. And then, the millions of people who watched what was going on, but didn’t participate. But, there were a small number who chose to commit acts of violence. Who are here only, unfortunately, to agitate and to attack those who protect us, our police officers. And that’s just unacceptable.

Mayor Bill de Blasio: (00:36)
I spent a lot of time today in Brooklyn, a lot of time today in Manhattan. And what I saw was some very, very systematic efforts by a very few people, to create a negative atmosphere. And those people do not represent the values of New York City. And what they are doing is not going to help us move forward in New York city. I’m joined here by deputy Mayor, Phil Thompson, by Commissioner Marco Carrión.

Mayor Bill de Blasio: (01:06)
Just like me, they’ve been out around the city. And what we have seen, again, a small number of people in the scheme of things, protesting to begin with. Very few of whom committed acts of violence, but that few, was systematic in their efforts to harm police officers, and to create damage to police vehicles, to storefronts, to other property.

Mayor Bill de Blasio: (01:29)
And again, that’s not going to get us anywhere. So, to the peaceful protestors, if any of you are still out there tonight, or trying to work peacefully for change, let me be very clear. We hear your desire to see these issues, relationship between police and community, the need for justice, the need for real change in our society. We hear you loud and clear. We appreciate and respect to all peaceful protest. But now, it is time for people to go home. If you went out peacefully to make a point about the need for change, you have been heard, and change is coming in the city. I have no doubt about that. It’s time to go home, so we can all move forward.

Mayor Bill de Blasio: (02:37)
So, look, the NYPD, all day long, has been working hard. It’s been a very, very difficult day for our officers. Some of them have been put into very dangerous situations, and that’s not appropriate. That’s not the protest reality and history that we believe in, in this city. We believe in peaceful protest. We believe in civil disobedience. We believe in people exercising their democratic rights. But, not attacking police officers, not attacking communities.

Mayor Bill de Blasio: (03:05)
And what I heard from elected officials today, and community members, was how resentful they were, that people were coming in, in many cases, from outside their community, and creating negativity and violence that did not represent their community.

Mayor Bill de Blasio: (03:18)
So, look, we got a lot of work to do in this city, but this is a place that is capable of great change and great progress. It always has been. And I have a lot of faith in the people of New York city. We will get through this moment. We will make the changes we need to. At the same time, we’re fighting a crisis, a huge crisis of the coronavirus pandemic. And we’re fighting that together, as one New York City.

Mayor Bill de Blasio: (03:45)
The story of these last three months has been New Yorkers uniting, to fight back a crisis that we could never have imagined. To fight back a disease we didn’t even know about. New Yorkers came together to do that. And the reason this city is getting healthier and safer all the time is because New Yorkers banded together. So, we will band together, again, to overcome the challenges we face. That is how New York City moves forward. Let me see if there’s any immediate questions.

Speaker 2: (04:14)
Yeah. Mayor De Blasio, there’s lots of concerns for people in New York City, that could have been present throughout all this. You said you were in Brooklyn, we haven’t seen you. It’s now 11:40, we’re doing this first reveal. What’s the message you want to say, beyond just platitudes of New York being together, but about the violence and the rising concern of what’s going on right now in the city, without using excuses?

Mayor Bill de Blasio: (04:30)
Again, they have been present all day where I needed to be, and our officers have been out doing their job. I’ve been in touch with Commissioner Shea and Chief Monahan. What matters is getting the work done to protect the people of this city, and address this situation. That’s what we’ve been doing. That’s the bottom line.

Mayor Bill de Blasio: (04:51)
No. The fact is, there’s very few people out protesting at this point. The NYPD has been addressing the situation. There’s over eight million people in the city, and the people who are out right now, number in the hundreds. And they’re being dealt with by the NYPD.

Speaker 4: (05:13)
What percentage of the arrestees, sir, are from out of town? Do you happen to know that?

Mayor Bill de Blasio: (05:13)
We certainly know there’s a substantial number of out-of-towners. And we’ll get you the information as we’re processing the arrests. Well, what we know for sure, and I’m hearing it from community leaders and elected officials is, they’re very dissatisfied by the reality of people, whether they’re from out of town or from other parts of the city, coming into their neighborhoods and trying to dictate the terms to them.

Mayor Bill de Blasio: (05:33)
People who represent the communities of our city, and the residents of our city, are not joining negative and violent protests. You can see it with your our own eyes. They’re just not participating in it. Very few people are doing this. And whether they’re from outside New York City, or from one part of New York City, and going into a neighborhood that’s not their own. Unfortunately, a small number of people are creating a lot of violence, and it’s absolutely inappropriate.

Speaker 5: (05:57)
Mayor De Blasio, how could one, with their eyes, determine if someone is a New Yorker? They live here. Maybe they have a license from another place and moved here a year ago. How do you quantify that? I mean, you actually have the data that shows which percentage of New Yorkers are-

Mayor Bill de Blasio: (06:08)
We’re saying, we’ll get the information we have, that I’m hearing directly from the NYPD leadership. But, I’m also hearing from community members about the fact that people are not from their community. And we’re seeing the same phenomenon all over the country.

Mayor Bill de Blasio: (06:20)
I’ve been in touch with fellow mayors today, and people are seeing folks come from outside their cities, to foment these protests. We’re seeing people certainly coming from outside the neighborhoods that are raising the concerns peacefully, and trying to create a violent, negative situation, with police. We can see it with our own eyes.

Speaker 7: (06:43)
Are you planning to bring the Governor into patrolling these protests?

Mayor Bill de Blasio: (06:48)
No, again, we have the NYPD addressing the situation, they’ve been doing it all day long. The number of protestors, again, the city of eight million people. Let’s remember how few people have been protesting, compared to the over eight million people live here.

Mayor Bill de Blasio: (07:02)
And it’s quite clear that a small number of them aim to do violence, and are being addressed, they’re being arrested, they’re being taken off the street. The NYPD is, obviously, the right organization to deal with this problem. They understand New York City, they understand the people of New York City, the streets of New York City. The only way this gets addressed is by the NYPD leading the way. And that’s what we’re going to do.

Speaker 8: (07:32)
Mayor, there’s an incident on Flatbush Avenue, in which a group of people surrounded the vehicle, there was cones, bottles, thrown at the car. They charged at a gate, behind which there were people. So my questions are two fold. First. What do you think of that incident? And two, for the police officers, what is your suggestive best practice for officers who are surrounded by people, to get out of that situation safely?

Mayor Bill de Blasio: (07:44)
Look, I’ve seen that video, and I’ve obviously heard about a number of other instances. It’s inappropriate for protesters to surround a police vehicle and threaten police officers. That’s wrong on its face. And that hasn’t happened in the history of protest in this city. I’ve been watching protests for decades. People don’t do that.

Mayor Bill de Blasio: (08:04)
And so, it’s clear that a different element has come into play here, who are trying to hurt police officers, and trying to damage their vehicles. And if a police officer’s in that situation, they have to get out of that situation. The video was upsetting, and I wish the officers hadn’t done that. But, I also understood that they didn’t start the situation. The situation was started by a group of protestors converging on a police vehicle, attacking that vehicle. It’s unacceptable. So, the officers have to get out of that situation. Where it’s happened in the last 48 hours, they have.

Mayor Bill de Blasio: (08:38)
But what I want to see is, that we get these violent protesters off the streets because the people in New York City, everyday people are not doing this. They just don’t do this to police officers, and they don’t do it to police vehicles. That’s just the fact. We’ve seen it time and time again. What real protest looks like in New York city, it does not look like this.

Mayor Bill de Blasio: (08:55)
This is last call. Katie, in a situation like that. It’s a very, very tense situation. And imagine what it’d be like. You’re just trying to do your job. And then, you see hundreds of people converging upon you. I’m not going to blame officers who are trying to deal with an absolutely impossible situation.

Mayor Bill de Blasio: (09:14)
The folks who were converging on that police car, did the wrong thing to begin with. And they create an untenable situation. I wish the officers would have found a different approach, but let’s begin at the beginning. The protestors in that video did the wrong thing to surround that police car, period. Thank you, everyone.