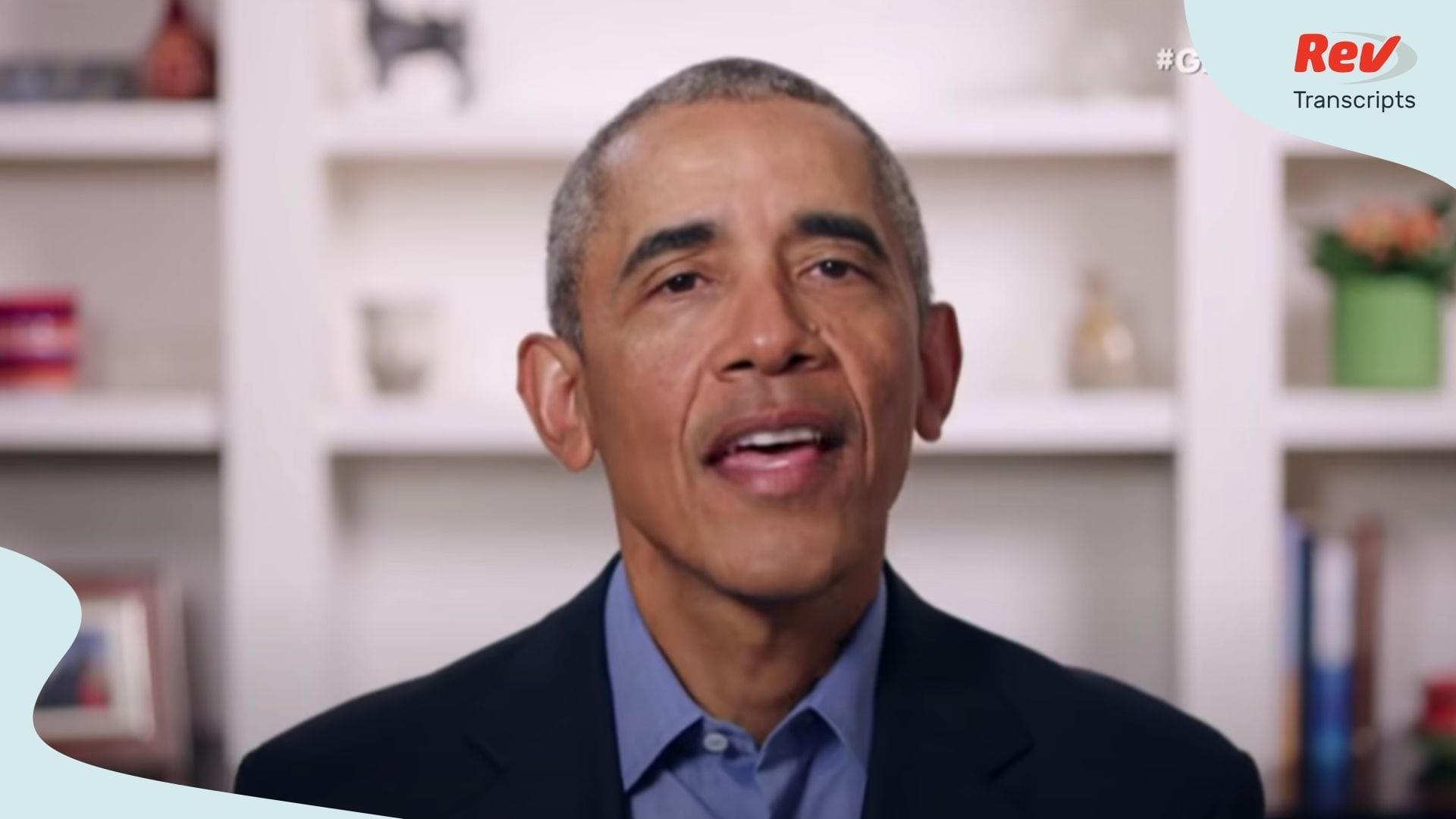 Barack Obama gave a virtual commencement speech in a “Graduate Together” televised event for graduating high school seniors. Read his speech to the 2020 class here.

Barack Obama: (00:00)
Hi everybody. Aniyah, thank you for that beautiful introduction. I could not be prouder of everything you’ve done in your time with the Obama Foundation. And, of course, I couldn’t be prouder of all of you in the graduating class of 2020, as well as the teachers and the coaches and most of all, parents and family who guided you along the way.

Barack Obama: (00:24)
Now, graduating is a big achievement under any circumstances. Some of you have had to overcome serious obstacles along the way, whether it was an illness or a parent losing a job, or living in a neighborhood where people too often count you out.

Barack Obama: (00:41)
Along with the usual challenges of growing up, all of you have had to deal with the added pressures of social media, reports of school shootings and the specter of climate change. And then just as you’re about to celebrate having made it through … Just as you’ve been looking forward to proms and senior nights, graduation ceremonies, and let’s face it, a whole bunch of parties … The world is turned upside down by a global pandemic. As much as I’m sure you love your parents, I’ll bet that being stuck at home with them and playing board games or watching Tiger King on TV is not exactly how you envisioned the last few months of your senior year.

Barack Obama: (01:26)
Now I’ll be honest with you. The disappointments of missing a live graduation, those will pass pretty quick. I don’t remember much of my own high school graduation. I know that not having to sit there and listen to a commencement speaker isn’t all that bad. Mine usually go on way too long. Also, not that many people look great in those caps, especially if you have big ears like me. You’ll have plenty of time to catch up with your friends once the immediate public health crisis is over.

Barack Obama: (02:02)
But what remains true is that your graduation marks your passage into adulthood. The time when you begin to take charge of your own life. It’s when you get to decide what’s important to you, the kind of career you want to pursue, who you want to build a family with, the values you want to live by. Given the current state of the world, that may be kind of scary. If you planned on going away for college, getting dropped off at campus in the fall, that’s no longer a given. If you were planning to work while going to school, finding that first job is going to be tougher. Even families that are relatively well off are dealing with massive uncertainty. Those who were struggling before, they’re hanging on by a thread. All of which means that you’re going to have to grow up faster than some generations. This pandemic has shaken up the status quo and laid bare a lot of our country’s deep-seated problems, from massive economic inequality, to ongoing racial disparities, to a lack of basic healthcare for people who need it.

Barack Obama: (03:15)
It’s woken a lot of young people up to the fact that the old ways of doing things just don’t work. That it doesn’t matter how much money you make if everyone around you is hungry and sick. And that our society and our democracy only work when we think not just about ourselves, but about each other. It’s also pulled the curtain back on another hard truth. Something that we all have to eventually accept once our childhood comes to an end. All those adults that you used to think were in charge and knew what they were doing, it turns out they don’t have all the answers. A lot of them aren’t even asking the right questions. So if the world’s going to get better, it’s going to be up to you.

Barack Obama: (04:06)
That realization may be kind of intimidating, but I hope it’s also inspiring. With all the challenges this country faces right now, nobody can tell you, “No, you’re too young to understand,” or, “This is how it’s always been done.” Because with so much uncertainty, with everything suddenly up for grabs, this is your generation’s world to shape. Since I’m one of the old guys, I won’t tell you what to do with this power that rests in your hands.

Barack Obama: (04:38)
But I’ll leave you with three quick pieces of advice. First, don’t be afraid. America’s gone through tough times before. Slavery, civil war, famine disease, the Great Depression and 9/11. Each time we came out stronger, usually because a new generation, young people like you, learn from past mistakes and figured out how to make things better.

Barack Obama: (05:05)
Second, do what you think is right. Doing what feels good, what’s convenient, what’s easy, that’s how little kids think. Unfortunately, a lot of so-called grownups, including some with fancy titles and important jobs still think that way, which is why things are so screwed up. I hope that instead you decide to ground yourself in values that last. Like honesty, hard work, responsibility, fairness, generosity, respect for others. You won’t get it right every time. You’ll make mistakes like we all do. But if you listen to the truth that’s inside yourself, even when it’s hard, even when it’s inconvenient, people will notice. They’ll gravitate towards you. And you’ll be part of the solution instead of part of the problem.

Barack Obama: (05:58)
Finally build a community. No one does big things by themselves. Right now when people are scared, it’s easy to be cynical and say, “Let me just look out for myself or my family or people who look or think or pray like me.” But if we’re going to get through these difficult times, if we’re going to create a world where everybody has opportunity to find a job and afford college, if we’re going to save the environment and defeat future pandemics, then we’re going to have to do it together. So be alive to one another’s struggles. Stand up for one another’s rights. Leave behind all the old ways of thinking that divide us, sexism, racial prejudice, status, greed, and set the world on a different path.

Barack Obama: (06:51)
When you need help, Michelle and I have made it the mission of our foundation to give young people like you the skills and support to lead in your own communities and to connect you with other young leaders around the country and around the globe. But the truth is you don’t need us to tell you what to do because in so many ways, you’ve already started to lead. Congratulations, Class of 2020. Keep making us proud.