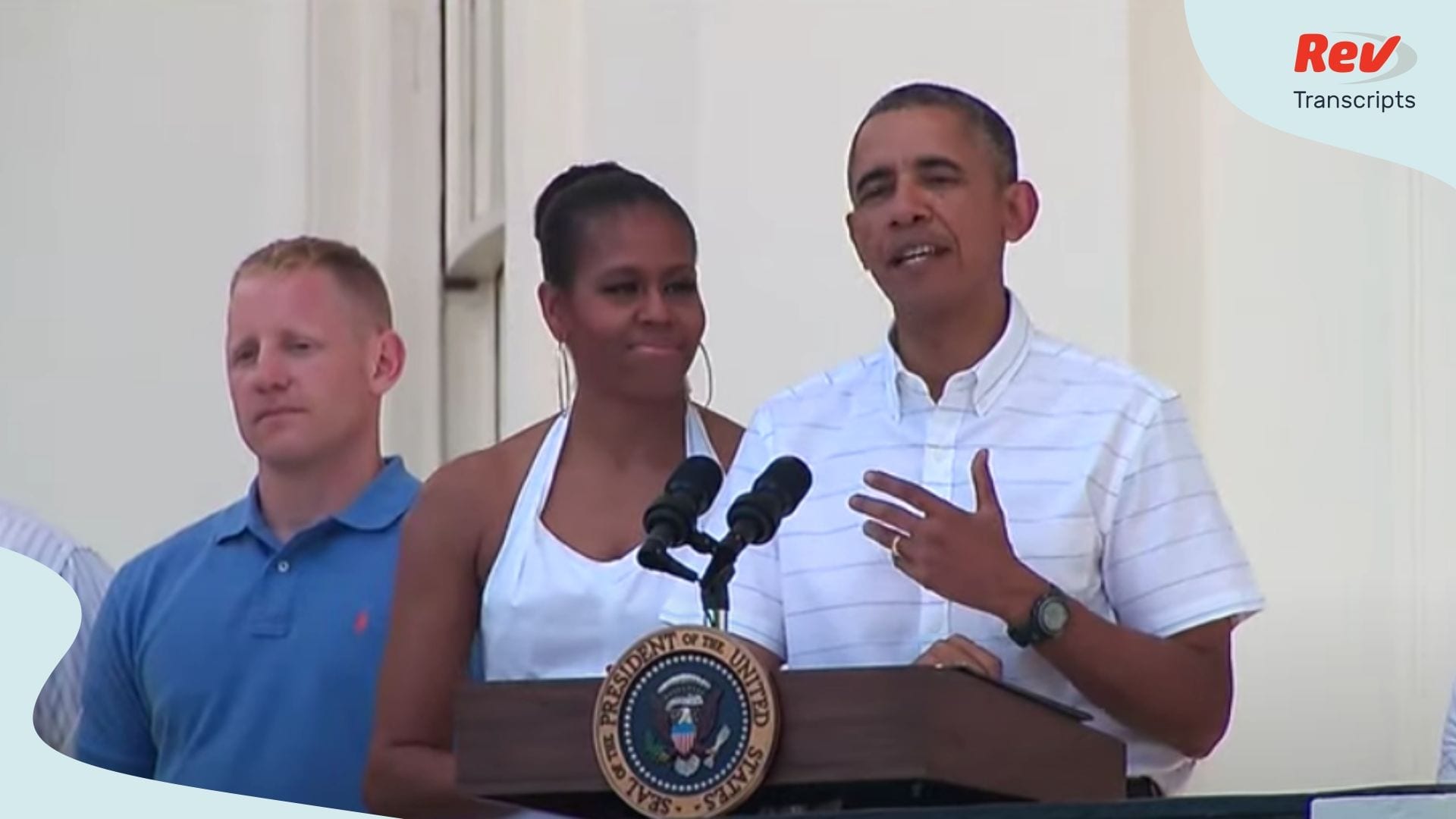 Barack Obama: (00:07)
No, thank you. This little party is something we’ve been doing every year because there’s no group that we’d rather spend time with on this most American of holidays than with you, the extraordinary men and women of America’s military. And, because of you, we’re safe. We’re free. We depend on you for our way of life. And the sacrifices you make are extraordinary. Now, in the house, we’ve got Army, we’ve got Navy, we got Air Force, we’ve got Marines. We got Coast Guard. And most important, we’ve got the incredible spouses and children. Give it up for outstanding military families.

Barack Obama: (01:05)
To help us celebrate, we’ve got our outstanding Marine band. Later on, we’re going to bring up Pitbull and his band. So, we want to see if you like to party. And, of course, this is always a special day for us because this is Malia’s birthday.

Barack Obama: (01:32)
She is. She’s getting her license, but she has to practice a little bit before that happens. Now, this is a gorgeous day. We want you to enjoy yourself. So, I’m going to keep my remarks brief. But it is important to remember why we’re here. 238 years ago, our founders came together and declared a new nation and a revolutionary idea, the belief that we are all created, that we’re free to govern ourselves, that each of us is entitled to life, and liberty, and the pursuit of happiness. And, in the generations that have followed, through war and peace, through depression and prosperity, these truths have guided us as we have built the greatest democratic, economic, and military force the world has ever known.

Barack Obama: (02:21)
So today, immigrants from around the world, dream of coming to our shores. Young people aspire to study at our universities. Other nations look to us for support and leadership in times of disaster, and conflict, and uncertainty. And, when the world looks to America, so often they look to all of you, the men and women of our armed forces.

Barack Obama: (02:43)
Every day, at home and abroad, you’re working to uphold those ideals first declared in that Philadelphia hall more than two centuries ago. Every day, you give meaning to that basic notion that, as Americans, we take care of each other. And so, today we honor all of you. And we salute some of the folks who are here with us on this balcony. We salute our soldiers like Chief Warrant Officer Tom Oroho, who has served this nation in uniform for 27 years, including deployments in Iraq and Afghanistan. Now, two summers ago, Tom was at the beach, saw a young girl and her father had been swept out to sea and jumped into dangerous riptide and pulled them back to safety. That’s the kind of service we expect from our outstanding soldiers. Please give it up for Tom. Thank you.

Barack Obama: (03:42)
We salute our sailors like Seaman Reverlie Thomas who came to America 21 years ago from Trinidad. She served a tour on the Persian Gulf for the Navy. Just a few hours ago here at the White House, I was proud to welcome Seaman Thomas and 24 other service members and military spouses as our newest American citizens. Thank you, Reverlie, and congratulations.

Barack Obama: (04:08)
We salute our airmen like Technical Sergeant Cheryl Uylaki, who manages the Fisher House at Dover Air Force Base, ensuring the families of our fallen are always provided comfort and care worthy of their profound sacrifice. We’re so grateful to you, Cheryl, for your great work.

Barack Obama: (04:30)
We salute our Marines like Sergeant Isaac Gallegos, who was severely wounded after an IED explosion in Iraq eight years ago, suffered burns on almost every inch of his face, was pronounced dead three separate times, undergone 161 surgeries. But he is here standing with us today pursuing a master’s degree, working full time for the Navy. That’s what we’re talking about when we talk about Marines. Give it up for Isaac.

Barack Obama: (05:04)
We salute our Coasties, like Lieutenant Commander Sean Plankey who helped lead a cyber team in Afghanistan that supported our troops during firefights and helped prevent the detonation of remote controlled IEDs, saving countless of lives. So, thank you, Sean.

Barack Obama: (05:26)
And we salute our military families, the spouses who put their careers on hold for their loved ones, the children who pick up extra chores while mom or dad is deployed, the siblings and parents and extended family members who serve the country every single day. You’re the reason Michelle and Jill Biden started the Joining Forces Initiative, to make sure America is supporting you too. And today, we honor your service here today.

Barack Obama: (05:57)
So, as we pause on this 4th of July to celebrate what makes us American, we salute all of you who’s service and sacrifice renews that promise of America every single day. On behalf of the entire country, Michelle and I simply want to say thank you to all of you for your courage, and your strength, and your unending service to this nation. Happy 4th of July, everybody. Have a great party. Have a hot dog. Have a hamburger. We want to see you dancing. God bless you all. God bless the United States of America. All right. Thank you.