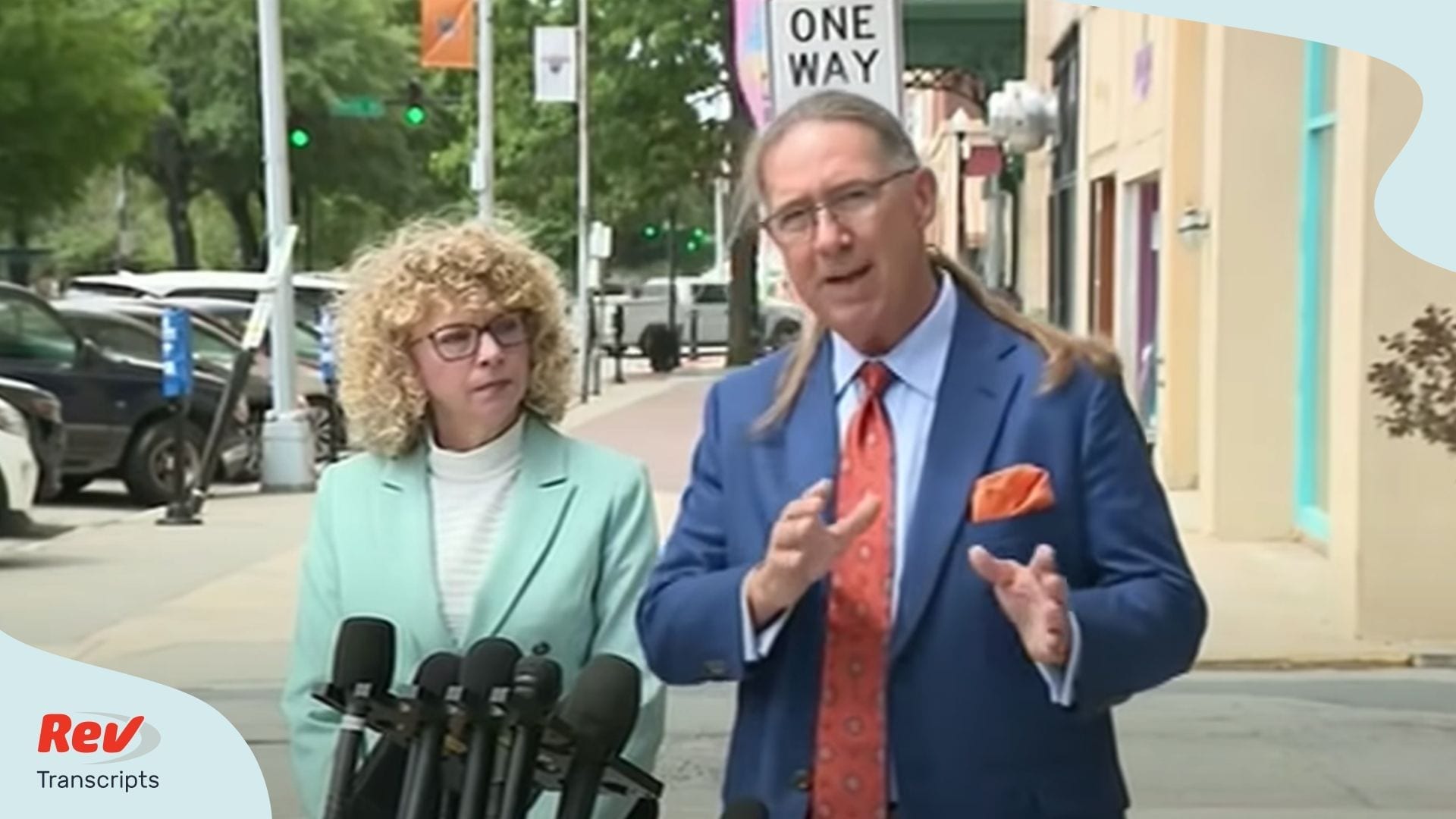 Lawyers for Greg McMichael, who is a suspect in the murder of Ahmaud Arbery, held a press conference May 15. The husband-wife legal team of Frank Hogue and Laura Hogue are representing Greg McMichael.

Frank Hogue: (00:00)
… nationwide interest in this case is that it appears to be yet another in a long line of tragedies we’ve seen too often a young African American man dies senselessly by gunfire at the hands of a white man, either a police officer or one acting in the place of a police officer while that young black man was engaged in nothing more than the innocent act of walking or jogging down in American street while being black. We know those stories. We know those tragedies. We too have grieved for those young men and have been angered by those stories.

Frank Hogue: (00:56)
This case, at first, appears to contain some of the same elements that feed into the despicable and violent history of racism in our country just based upon what little the public knows about this case up until now, but this case is not that story. When we bring it out in the proper venue a court of law at the proper time, the truth will reveal that this is not just another act of violent racism.

Frank Hogue: (01:39)
Greg McMichael did not commit murder. Greg McMichael is not a party to the crime of murder. This is not some sort of hate crime fueled by racism. It is and remains the case, however, that a young African American man has lost his life to violence. That is tragic. His family grieves. The people’s teeth are on edge, but the how and the why of it simply cannot be shoehorned into a narrative that’s being told so far.

Frank Hogue: (02:24)
In just the few days that we’ve been Greg McMichael’s lawyers, we have amassed witnesses, documents, video tape that tells a very different story, both about Greg, about his son, Travis, and about Ahmaud Arbery. Laura and I are experienced criminal defense lawyers. We don’t try our cases on the courthouse steps or even in front of our office building. We try them in the courtroom, but we invited you here today in order to implore you and the interested public to show the respect for our process of criminal law, the respect that it deserves to allow this case to unfold in the courtroom over time until the whole truth comes out.

Frank Hogue: (03:29)
We will soon schedule a preliminary hearing, and there, at that hearing, evidence will come to light. We will schedule a bond hearing at which hearing much about Greg McMichael will come to life. Even then, however, the full story will not be told… all the witnesses have been found and interviewed, all the documents have been gathered and studied, and all the video has been watched. Then if the current district attorney believes that either or both of the McMichaels committed crimes worthy of prosecution, then we will answer those charges in a court of law in a public trial before a jury of 12 people.

Frank Hogue: (04:23)
We believe in our jury system. While it may not be perfect, it was a stroke of genius for our founders to have created a path to justice where anybody accused of any crime, no matter how heinous, whether rich or poor, white or black or brown could make the government prove that case before the state can justifiably take away the liberty or even the life of the accused individual. There is no better way in the history of the world at protecting the innocent from wrongful punishment.

Frank Hogue: (05:10)
Here in America, we provide to every person those basic rights to due process and opportunity to have his side heard, to be represented by counsel, and to a fair trial and to require the state to prove its case beyond a reasonable doubt in a court of law. That is what we intend to provide for Greg McMichael.

Laura Hogue: (05:50)
The role of a criminal defense attorney is multifaceted. We have the honor of standing alongside the accused in any situation where he or she is charged, to advise, evaluate, and advocate for that individual. We have now represented Greg McMichael for just a few days, so we’re focused on the hard and important work of identifying all the places where the evidence can be found, collecting all of that evidence, reviewing that evidence, analyzing it, and assimilating it with other evidence.

Laura Hogue: (06:38)
As we get near to court to work on communicating to a jury the reason why those facts explain the truth of what happened on February 23rd, we know what you know: the statements, the videos, the photos, the records that have been gathered by law enforcement, by the public and by you, the media, and given the daily onslaught over the last several weeks of new information, some credible, some not-so-credible, you must also know how much work there still is to be done, but significantly, we know several other critically important facts, those facts that point to a very different narrative than the one that brings you all here today. Those facts will be revealed where all facts that matter are revealed: in a courtroom.

Laura Hogue: (07:58)
The ABA, our American Bar Association, model rules of professional conduct for attorneys charge us with many more responsibilities than simply the zealous advocacy of an individual charged with crimes. Our profession directs that a lawyer work to elevate the quality of lawyering in her profession. Our system works and requires of us that she vigorously address injustices in our imperfect system that necessarily requires active participation in our important conversations about race, bias, and policing in our nation, but beautifully, our profession goes one step further, placing upon attorneys’ certain duties simply as public citizens.

Laura Hogue: (09:04)
Our profession rightfully places upon every criminal defense attorney the responsibility to further the public’s understanding of and confidence in the rule of law and our justice system. A constitutional democracy depends on the public’s understanding of how all of this works in order for our system to function as it must. It has been said that it is very hard to respect and understand what a criminal defense attorney does until you or someone you love has been accused of a crime. A man has been charged. We are defending that man with pride, with zeal, and with vigor and with the hope that everyone listening will respect the very real damage to our criminal justice system and to our communities when conclusions are reached without all of the facts. We’ll now take a few questions.

Frank Hogue: (10:40)
One of the sacrosanct features of criminal defense law is that the attorney-client privilege must be protected at all times, so we will not comment at all on any dealings we’ve had, conversations we’ve had, his demeanor, nothing like that.

Speaker 4: (11:00)
… a press release that Mr. Arbery’s death was a tragedy, so with these new facts that you’re saying you’re going to present, does that change your thoughts on this being a tragedy?

Speaker 6: (11:20)
Can you shed any more light on your client’s version of events? Can you say what you believe people need to know beyond what was seen in that video?

Frank Hogue: (11:33)
Nothing more than what we’ve alluded to now in the way we will develop the facts, find out the truth, and present it in court. Your question would ask me to reveal, again, conversations with Mr. McMichael, and I won’t do that.

Speaker 6: (11:49)
Or even going into evidence that you found or additional details beyond what the public already knows.

Frank Hogue: (11:55)
Those will begin to come out in the preliminary hearing.

Male: (12:47)
I meant specifically the video of the incident.

Speaker 8: (13:15)
Do you believe that your client should be charged as his son Travis McMichael? Those the same-

Frank Hogue: (13:48)
We don’t have that scheduled yet. We do expect to have it scheduled soon. We’re in touch with the court about that, but we don’t have a date yet.

Frank Hogue: (14:02)
Well, working with, we are in contact with them, but they have their client, we have our client. Mr. Ruben and Mr. Sheffield are good lawyers. We know them, and we will see where our individual cases go.

Male: (14:31)
Would you like the public to know anything about Gregory McMichael?

Frank Hogue: (14:36)
Well, no, that will come out though best at the bond hearing, which will be a hearing after the preliminary hearing, not very far in the distant future, but as you know, if you’ve been to a bond hearing, that’s where we’re going to present to the judge a great deal about Gregory McMichael’s life and who he is. That will be the best time and place to do that.

Speaker 8: (14:58)
Was Gregory McMichael properly certified when he worked for the Glynn County District Attorneys Office?

Laura Hogue: (15:05)
Those will all be issues that have to be addressed later on.

Speaker 11: (15:13)
Do you believe you have information to get Mr. Michael out on bond once that time comes?

Frank Hogue: (15:20)
… we can. We have to persuade a judge to set him up a bond. That’s a tough thing to do in a case like this. Tall order for a judge to set a bond in any murder case, but let alone one that’s got a lot of attention like this one, but we always hope going into court that we have a chance if we have a fair judge, and we will have a good presentation to make for bond.

Laura Hogue: (15:56)
Again, that will be information that’s being gathered, simulated, and will be presented in court.

Frank Hogue: (16:02)
Well, thank you all very much for being here. We appreciate your time.