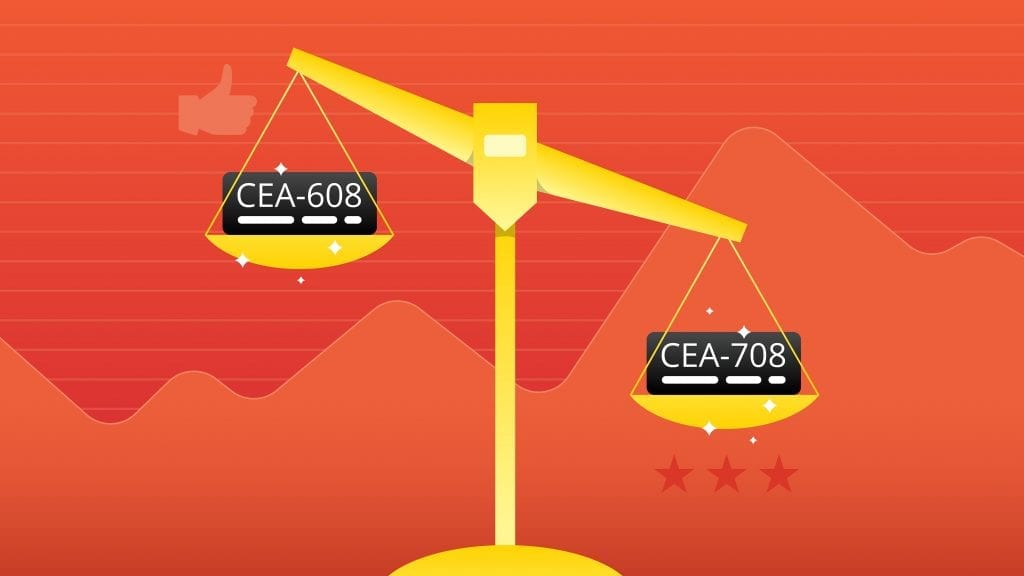 Captions in your video content help you reach a larger audience by increasing accessibility and versatility. Having highly accessible videos helps you make sure every viewer has complete access to your content, expanding your audience and brand reach.

The Federal Communications Commission’s rules about closed captioning include details about caption accuracy, placement, and synchronicity. The video’s audio must display as text on the screen so that every viewer can fully understand the content. While both CEA-608 and CEA-708 captions meet some of the FCC’s guidelines, CEA-708 has the versatility to help your viewers get the most out of your video content.

While you’ve probably heard of CEA-608 and CEA 708 captions, you may not understand the key differences and how the two caption formats interact with various platforms. CEA-608, sometimes called Line 21 captions, were standard with analog TV before the industry transitioned to digital television (DTV) in 2009. CEA-708 is the more modern caption format designed for digital broadcasts.

CEA 608 line 21 captions represent the audio of a program, but may not include noises, punctuation, or indicate which character is speaking. They appear in a fixed position along the bottom of the television screen with a black boxed background behind white characters displayed in all caps. Users select from seven language options; French, German, Italian, Dutch, English, Portuguese, or Spanish. CEA-608 can’t support many special characters or alphabets used with other languages.

CEA-708 captions are the modern standard for captions in North America, supporting nearly every language with user-selectable options for font type, text size, and background color.

Roll-up CEA-708 captions appear with live television broadcasting, scrolling from the top or bottom and spaning two-to-three lines. Pop-on captions, used primarily for online videos and pre-recorded television, are between one and three lines long and appear in sync with the audio. They include punctuation, non-speech noises, and they identify the speaker.

What is the difference between CEA-608 and CEA-708 captions?

With CEA-708 captioning, any content on digital television transitions easily to web content with full accessibility intact. Both Android and iOS devices support CEA-708 captioning. According to FCC rules, all material appearing on U.S. television, video on demand, and live TV must include compliant captioning. While the FCC doesn’t explicitly demand the use of a specific captioning format, it does require that online captions for online viewing appear with the same or better quality than the television captions for the programming.

CEA-608 encodings provide closed captioning for analog television broadcasts and DVDs. The US DTV Delay Act of 2009 spurred the transition from CEA-608 to CEA-708 captions to better comply with FCC regulations about accessibility.

Why are CEA-608 captions an outdated format?

CEA-608 (Line 21) captions work with analog and some digital broadcasts, but their built-in restrictions aren’t in compliance with the new FCC requirements. For example, these limited captions don’t allow users to choose a background color or font color. They may block important on-screen information due to design limitations, restricting the viewer’s understanding of the content.

According to the 21st Century Communications and Video Accessibility Act (CVAA), user control requirements must include options to change text opacity, font, and color. The CVAA also indicates that captioning for IP video must consist of the ability to change window color, character edge attributes, and text size. CEA-608 captions don’t include this functionality.

What file format should I use for CEA-708 captions?

When delivering CEA-708 captions to Netflix or iTunes, a digital broadcast station or film festival, it’s important to have this caption format ready along with your content deliverables.

How to get Scenarist (.SCC) caption files for my content?

When you order captions for your content through Rev’s transcription services, you can download the (.SCC) format, as well as various other formats for video editing, online video players, and other distribution platforms.

Talk with a Rev captioning expert today to learn more about how closed captioning can expand your audience by making your content more accessible while helping your videos rank higher in search engine results.