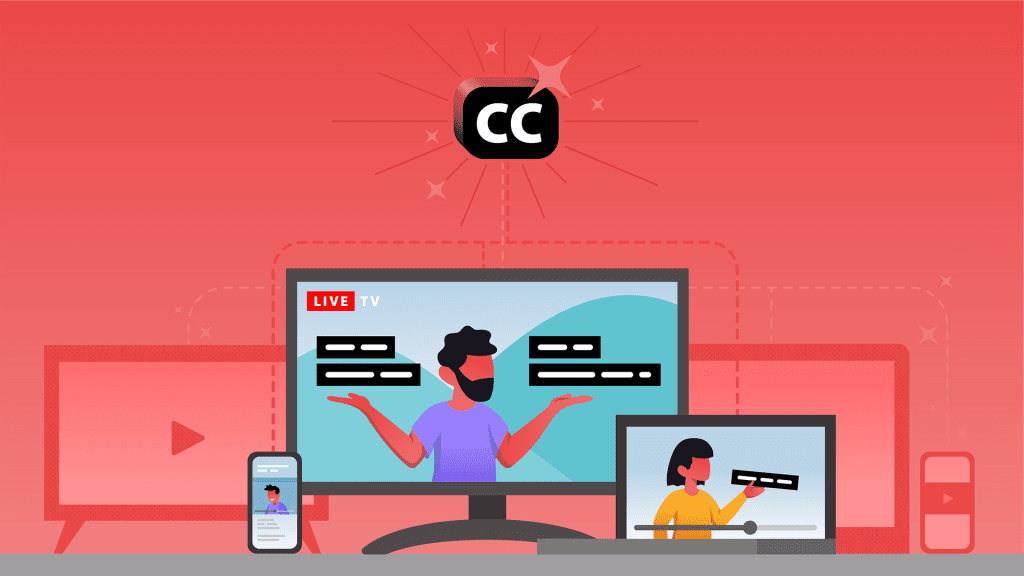 The Laws, Requirements, and Expectations for Captioning TV

Television should be accessible for everyone according to the Federal Communications Commission. To ensure this happens, the FCC has laid out rules that state that broadcasters have to display the audio portion of programming on the screen. The FCC rules state that closed captioning must be accurate, synchronous, complete, and properly placed.

In this post, we’ll cover the closed captioning and subtitle requirements for all of the major platforms:

The Laws and Requirements

While the rules apply to live content and pre-recorded programming, DVDs and video games do not fall under its purview. Exempt from this is brief public-service announcements not funded by the federal government, programming that airs overnight, and textual content that does not need on-screen captioning.

But the FCC isn’t the only government body that has laid out rules for captioning. A 2012 discrimination lawsuit determined that the Americans with Disabilities Act (ADA) also covered streaming programming. Amendments to the 1973 Rehabilitation Act expanded coverage to include certain electronic media, especially educational ones such as college lectures made available for wide release. The 21st Century Communications and Video Accessibility Act, passed in 2010, streamlined the process of determining what required captioning. It states that anything that has been broadcast on television requires captioning.

Deaf and hard-of-hearing individuals have come to expect a high level of captioning for all programming—from broadcast television to streaming platforms and even to YouTube videos where it isn’t yet legally required. Even more, they expect to be able to understand the full scope of the programming. This includes not only the dialogue but also background noises, ambient sounds and more. This way they can attain the same level of entertainment and satisfaction as fully hearing individuals.

Where Closed Captioning Is Implemented in Broadcast Television

Considered the most difficult type of captioning, it is also often the most critical. Live captioning includes news broadcasts, political debates, award shows, and live sporting events. What makes this type of programming challenging is that you often have multiple people talking at once. Take a live sporting event, for example. Usually, this type of television programming has at least two commentators. A sports commentator provides viewers with game statistics and the play-by-play action while a “color” commentator puts it into context for the viewer. Also, each sport has terminology that can make captioning challenging.

With pre-recorded television programming, the content is captioned beforehand. This includes content such as scripted television shows and commercials. As a bonus, it allows advertisers to reach consumers even at a loud bar or other noisy environments.

Some content—especially live-event programming—goes through an extra step before online viewing or streaming. The existing captioning is either improved, cleaned up, or both to ensure the captioning is accurate. This process is also valuable for archival purposes, such as television show DVDs, where people will be watching the content for years.

The post-production details above apply to streaming services in order to meet the FCC’s rules for accurate, synchronous, complete, and properly placed captioning. However, the rules and expectations for these streaming platforms, apps, and websites go beyond these requirements.

Subtitles differ from captions. While captions include ambient noises and music cues in addition to dialogue, subtitles are dialogue translated into another language. Subtitles are often available as an option within streaming television for non-English speakers. Non-English speakers appreciate when streaming sites offer subtitles in their native language. This makes it important for content creators to offer multiple languages for all their content in the major languages of the viewing region.

Anything that has been broadcast on television requires captioning.

Netflix, for example, said in a 2017 blog post that while it originally offered three languages, it now offers more than 20 languages. It was propelled to make this decision by its “desire to delight members in ‘their’ language.”

Real-time closed captioning of live streaming TV doesn’t apply to Netflix, which is packaged content. It does apply to live streaming platforms like Hulu Live, YouTube, network websites, and Facebook. In 2013, the FCC determined that full-length “Internet programming” required captioning when shown online. Four years later, that expanded to include video clips such as news pieces and sporting events.

All recent TVs should have closed-captioning decoding built-in. For older TVs, closed captioning is provided by either a cable company or satellite television provider. To activate closed captioning, viewers mute their TV or turn on CC via their remote or TV menu.

It’s up to the TV network to encode and set the captions in line with the broadcast data.

But how are the captions sent to TVs or set-top boxes? It’s up to the TV network to encode and set the captions in line with the broadcast data.

If you need to deliver captions, use this checklist to ensure the caption files are correct, prompt and go to the right destination.

While there are multiple format types, a few are used by most of the television networks and streaming providers. Consider using one of the following formats:

European markets use Teletext, EBU-STL, and DVB Teletext/Subtitles. For online captioning, the standard formats are TTML, WebVTT, or 608 over 708. 608 allows for the transmission of up to four simultaneous channels of data. You have probably seen some of these within your TV menu as CC1 through CC4. 608 and 708 can be translated into WebVTT for streaming services.

The benefits of providing captions go beyond legal requirements.

Once you determine the ideal format for your purposes, the next step is to create them. You could spend time and energy building a dedicated team or searching for a captionist. Or, you could choose a more economical option. By using a service like Rev for your captions, you reduce the headaches while ensuring the job is done correctly. Rev, at an affordable $1.25/minute, has a 99-percent accuracy rate.

When you deliver your media package, make sure the captions file is in the same media folder for ease of use. You may even consider encoding the captions directly into the media files. Before you do this, check that the equipment the network or streaming platform uses will be able to read your file.

How to Get Captions or Subtitles for Television Media Content

The benefits of providing captions go beyond legal requirements. Besides requiring captions for deaf and hard-of-hearing viewers, it also helps people in places where listening to the TV is difficult, such as fitness centers, restaurants, and bars.

Studies show that more than 80 percent of people who watch content with captions turned on do not actually need them. To meet legal requirements and add value while streamlining the process, consider using Rev’s captioning and subtitling services for all your pre-recorded and post-production content. For live-captioning, consider partnering with the Rev.ai Streaming API.

Speak With a Captions and Subtitles Expert