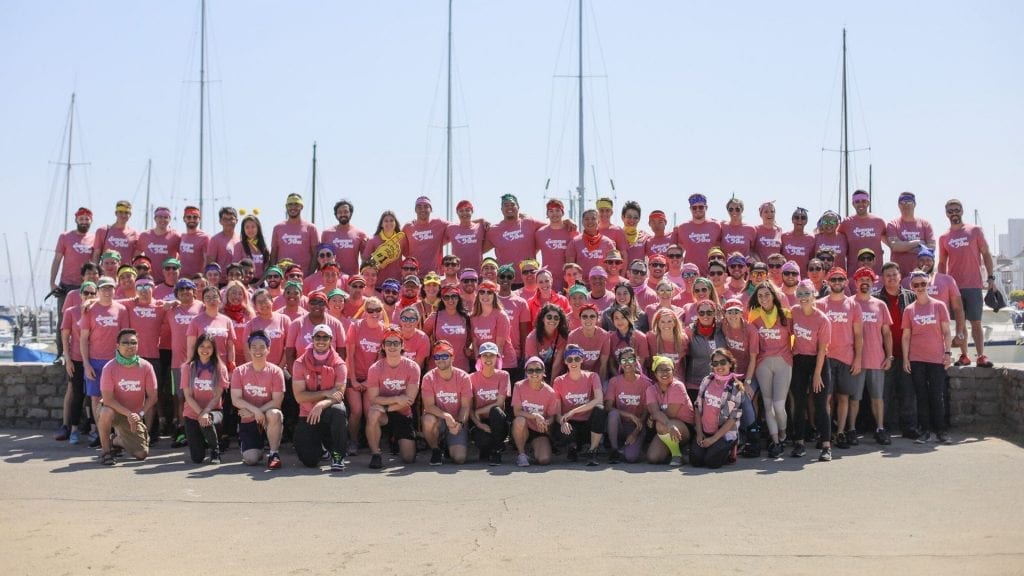 For the near-decade we’ve been around, Rev has worked diligently to improve the quality and speed of our transcription, translation, and captioning services in every way we can, as elegantly as we can, as efficiently as we can.

In terms of that rather lengthy timeline, there may have never been a year we’ve done so much as 2019, which saw across-the-board advancements and some top-of-our-game productivity. Have a look at some of these particularly impressive numbers. 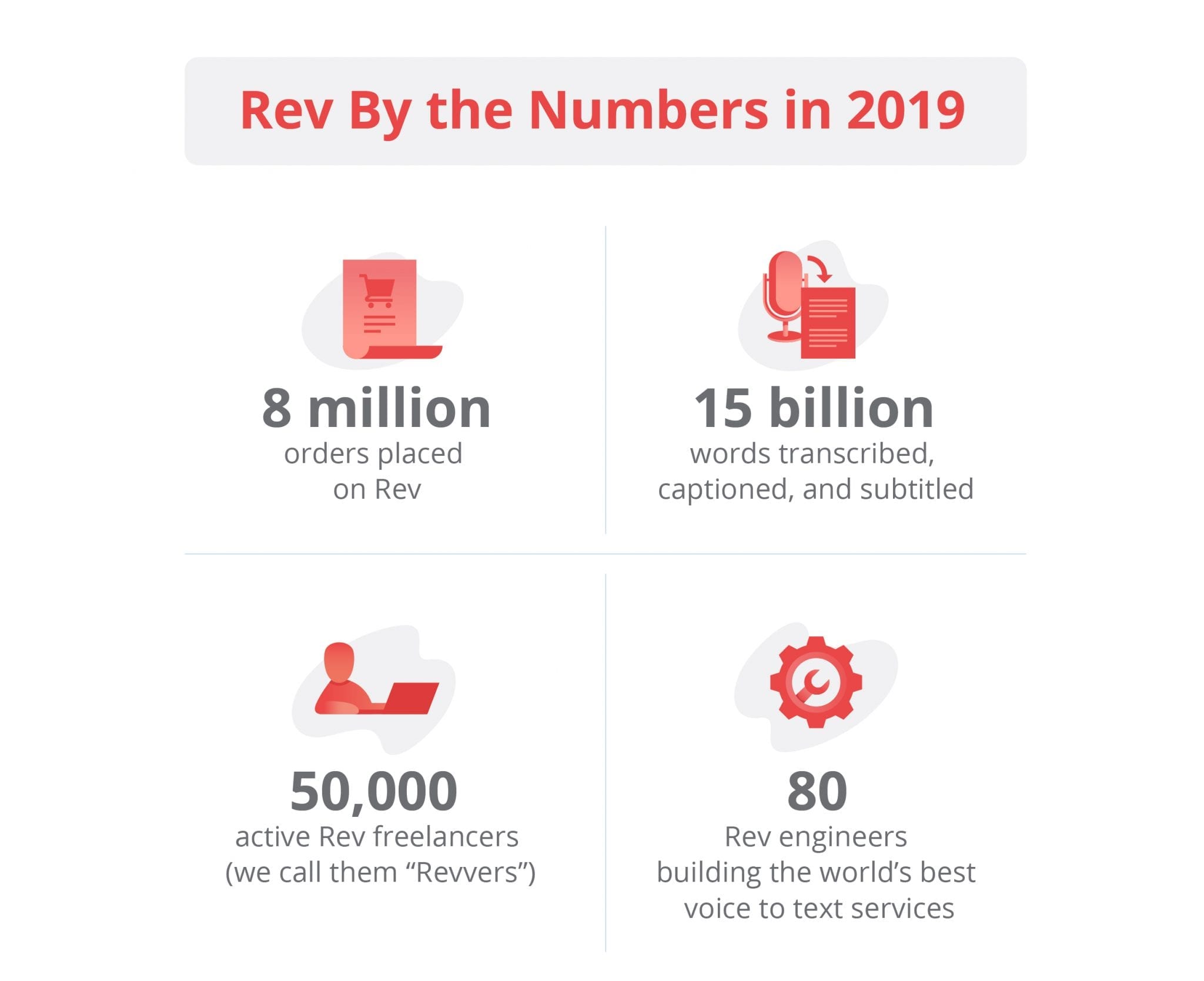 Wow, right? And we couldn’t have done it all without some game-changers in the innovation department. So here’s a rundown — which is (shockingly) in no way exhaustive — of our favorite improvements in just the last year.

For years, folks asked us for a more streamlined way to sort and store their files. This year, we delivered in the form of Folders, which got off to a hot start and quickly followed with updates for file bulk-move.

We Came, We Saw, We Drafted

With what we believe is the world’s best AI for transcribing English audio to text, we unveiled our Rough Draft feature, allowing for instant turnaround times for customers who need basic transcript drafts, not polished transcripts.

We Handed Over a Shiny New Tool

Transcription-based Revvers now have a tool that allows them to start their work from an automated draft. This has increased productivity by as much as 40% — and resulted in even faster turnaround times.

We Named the Unnameable

Well, maybe not “The Unnameable,” but we did provide a way for customers to save speaker names and glossaries (for oftentimes difficult in-group jargon) to both reduce avoidable errors and — you guessed it — quicken turnaround times.

We Earned a Sibling

For software developers who want to build voice-to-text into an app, we unleashed our sister site Rev.ai.

We Helped You Unplug From the Plug-Ins

The browser-based Online Voice Recorder was revealed for all to easily record audio straight from their computer or phone, stripping the need for apps or plug-ins.

We Got Our Helper Badge

We made a new Resource Hub and Help Center and invested in dozens of useful how-to articles focused on video editing, accessibility, and beyond so all customers can make get the most out of their transcripts and caption orders.

We Invested in Our Humans

Our team —  all the beautiful people in San Francisco and Austin you see above —  grew by leaps in bounds in 2019, with many new engineers, customer support staff, and more.

We Made This Handy Chart

For the exceptionally curious among us, we also threw together an in-depth timeline of all the changes we made in 2019. You know, just for old times’ sake. (Click the chart for a larger view) 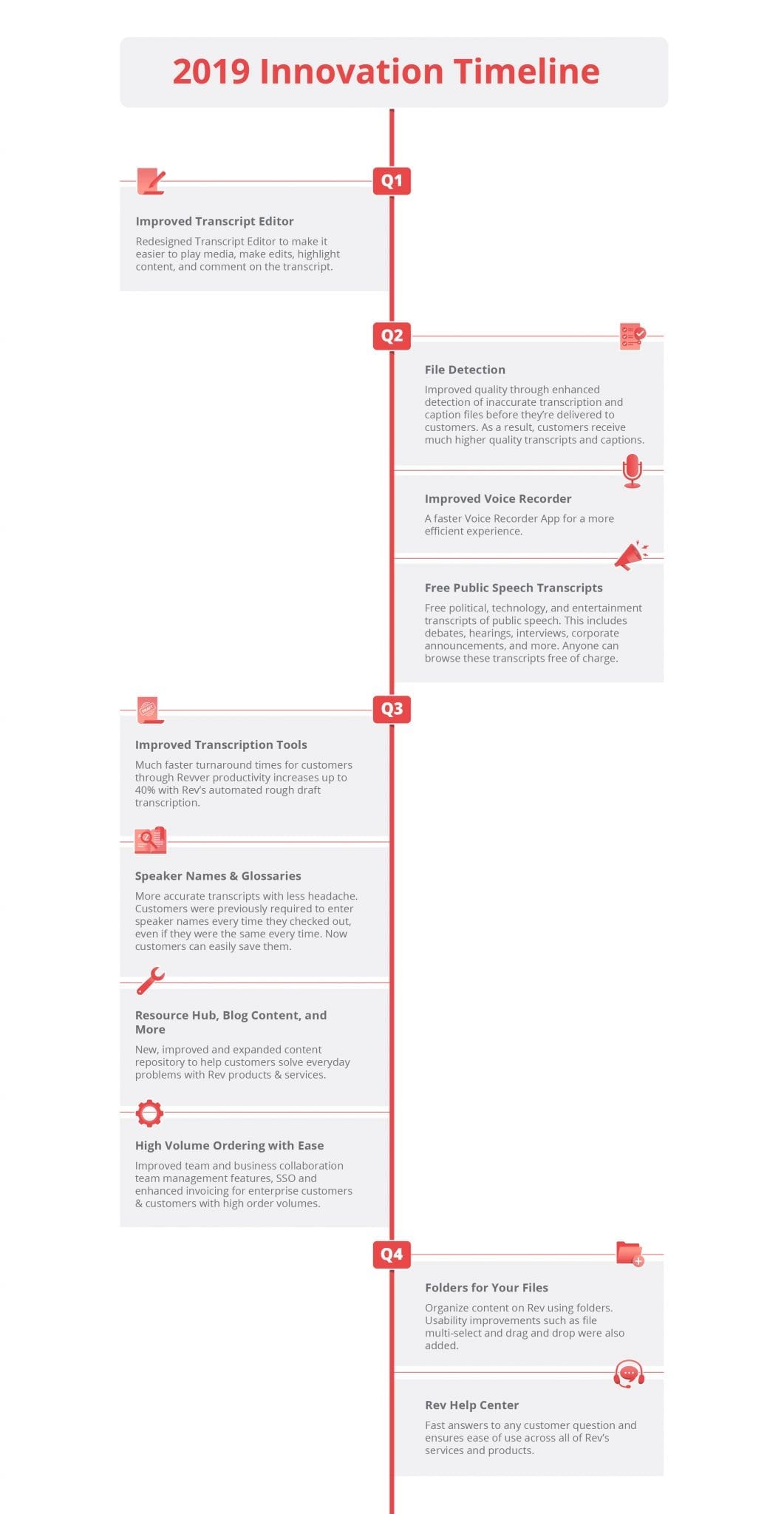