Transcript: Mike Bloomberg Speech After Dropping Out of Presidential Race 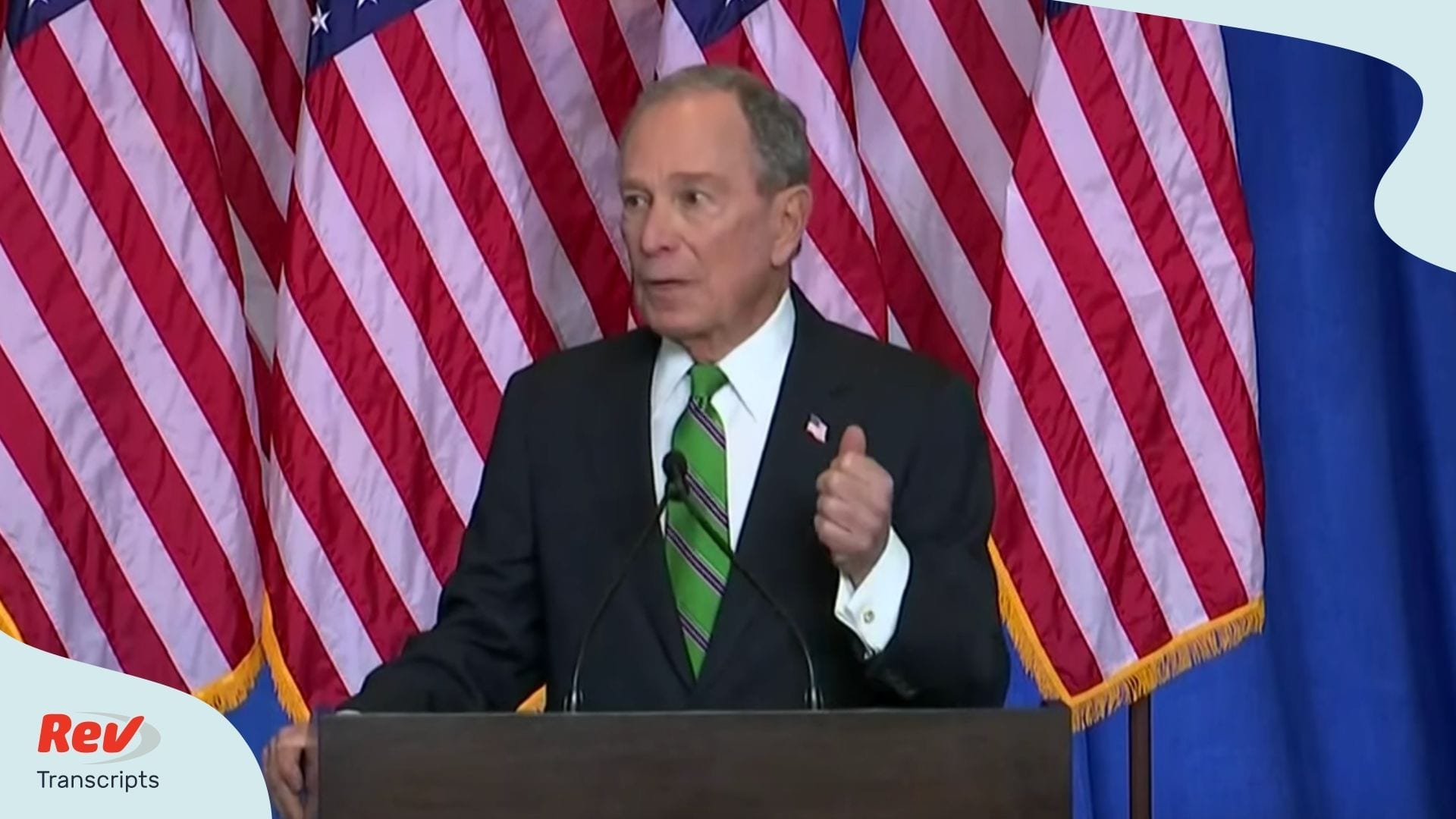 Mike Bloomberg announced today that he is dropping out of the 2020 presidential race after a disappointing Super Tuesday. He is now endorsing Joe Biden for the Democratic nomination. Read the full transcript of his speech today.

Mike Bloomberg: (21:54)
Well hello Bloomberg 2020. I decided we have the slogan wrong. It should be Mike likes you. Thank you. Thank you everyone. Not sure what you say other than thank you to everybody here who’s tried to make a difference and Mayor Nutter, Mike, you really have been amazing. Where are you hiding again, right here. Hiding in plain sight. These past few months have been some of the most inspiring, certainly in my life and I hope in yours. In just 100 days, I have been to 73 cities in 27 states all across the country. We’ve gone from Portland, Maine, all the way to Compton, California, from Detroit, Michigan down to Jackson, Mississippi, and every place I went I listened to Americans of every age and every race and every ethnicity and every religion and every identity and orientation. And I heard about their hopes and their dreams and their fears and their struggles.

Mike Bloomberg: (23:14)
And those come from conversations just affirmed my faith in the work that our team was doing to defeat Donald Trump and bring our… And bring our country back together and get things done for the American people. Now, today I want to say how grateful I am to everyone who has been part of our team and I want to thank you all from the bottom of my heart for your support, your work, and your votes. And I’m just telling you, the American public should be saying thank you to you as well. You really made history. You really did. Yes, that’s true.

Mike Bloomberg: (24:03)
History you really did. Yes, it’s true. No campaign has ever accomplished as much as you did in such a short period of time. If you go back, we started at 1% in the polls, but yesterday, thanks to you, nearly 2 million Americans cast their votes for our campaign. This really is the best, most creative, most hardworking campaign team ever assembled. And I have to say, there is no doubt in my mind we would have beaten Donald Trump in November. And you know who else knows that? Donald Trump. He’s been scared stiff of us and for good reason because every time he hit us we hit back twice as hard. And unlike his jabs, our punches packed the truth. Now look, today I am cleared eyed about our overriding objective and that is victory in November.

Mike Bloomberg: (25:17)
Not victory for me or our campaign, but victory for our country. If you remember, I entered the race for president to defeat Donald Trump, and today I am leaving the race for the same reason to defeat Donald Trump because staying in would make it more difficult to achieve that goal. I’ve always believed that data should inform our decisions. That’s the way I ran my business and foundation and it’s the way we ran city hall. In fact, our campaign slogan was “In God we trust, everyone else bring data.” Well, after yesterday’s results, the delegate math had become virtually impossible and a viable path to the nomination just no longer existed. And I will not be our party’s nominee, but I will not walk away from the most important political fight of my life. And I hope you won’t walk away either.

Mike Bloomberg: (26:22)
I’ve always believed that defeating Donald’s Trump starts with uniting behind the candidate with the best shot to do it. And after yesterday’s vote is clear, that candidate is my friend and a great American, Joe Biden. I’ve known Joe for a very long time. I know his decency, his honesty, his commitment to the issues that are so important to our country, including gun safety, health care, climate change, and good jobs. And I’ve had a chance to work with Joe on those issues over the years, especially when he was Vice President. He fought for working people his whole life. And I’m glad to say I endorse Joe Biden and I hope you will join me and working to make him the next President of the United States of America.

Mike Bloomberg: (27:21)
It is an enormous understatement to say that I’m immensely proud of the campaign that we ran and the issues we raised and the sweeping achievable plans we proposed. And that includes our Greenwood Initiative to write historic wrongs, of fight racial inequality, and make the promise of it equal opportunity real for the black communities that have been doing centuries of exploitation and discrimination. That work I’ve always thought is fundamental to the future of our country and to the more perfect union that each generation is called to build. This afternoon, I want you to all know that I am grateful to everyone who supported us. To everyone at our campaign headquarters here in New York, the work that you did every day, late at nights, early mornings and weekends and holidays was really just amazing. And to our incredible staff and volunteers in the States, you knocked on more than 2 million doors and had more than 12 million conversations with voters. And to the traveling … Yes, you deserve a round of applause. And to the traveling team from advance to press, you made great events look easy.

Mike Bloomberg: (28:36)
You made them look flawless, exciting and energizing. You were the road warriors. Now, no one out worked all of you. And that’s for sure. I’m very proud and you should be too, because you devoted your days and nights doing the most important job in America, beating Donald Trump and working to reclaim our values and rebuild our country. Before I close, I just wanted to thank our campaigns amazing co-chairs, who are among America’s most respected and effective leaders; Steve Benjamin, Greg Fischer, Michael Tubbs, Darryl Bowzer, Stephanie Murphy, Manny Diaz, Gina Raimondo, Bobby Rush, Stephanie Rollins Rake, Antonio vigor Rossa and of course the incomparable Michael Nutter. And I want to thank all the mayors and local leaders and member of commerce, and everyone else who believes in us, who endorsed our candidacy and who worked hard to unite voters around your vision.

Mike Bloomberg: (29:53)
This morning I called about 75 of them just to say thank you, and it was maybe the 75 best compensations I’ve ever had. They really believed, and they were as proud today that they’d endorsed us as they were the day before, when before we were before the voters. Your support and your trust meant the world to me and to them. And I look forward to working with all of you in the months and years ahead. I’ve been doing this for a long time, and every day gets better and I can tell you, today, I’m sorry we didn’t win, but it’s still the best day of my life and tomorrow is going to be even better, and I want you to know that. I’m glad you’re doing, I hope Diana does. I also want to thank a few people who did a spectacular job pulling this whole team together and managing the campaign and always giving me honest advice even when I didn’t want it. Patty Harris, Kevin [inaudible 00:07:14], and Howard Wilson.

Mike Bloomberg: (31:21)
Our campaign offered a clear, simple promise, Mike, will get it done. And today I can promise you I’m going to keep working on it and I hope you will too. And I can tell you my daughters and Diana and all of my friends are committed to doing the same thing because as we all know, it means passing common sense gun safety laws that save lives. It means protecting our communities and climate change. It means improving health and health care for all Americans. It means making sure that every child can attend a great public school, doesn’t matter what zip code they live at. It means fighting against discrimination, inequality, wherever they exist. And it means protecting a woman’s right to choose. That’s it, they just have to.

Mike Bloomberg: (32:20)
Finally, let me just say this, I have never believed in doing anything halfway. When I believe in something, I work like crazy and fight like hell to achieve it. I knew what this race would be about all about. I knew we didn’t have much of a chance, but we did it anyways and I’m just amazed at how many people have stood with me shoulder to shoulder, working and fighting every step of the way. I know you didn’t do it for me. You did it for our country, for America and you do it because you love America as much as I do. And that’s all I could ever ask for. And being part of this campaign is more than a young boy who memorize the midnight ride of Paul Revere ever dreamed of. Today I believe that our great nation still sees that light in the old North Church tower, the light of freedom, the light of Liberty, the light of equality and the light of opportunity. It is the same light that shines from the torch of the Statue of Liberty and inspires the world with our values and our ideals. No wall can block out that light. No lie can deny that light. And we will not allow any president to dim that light. Over these past three months, I’ve seen that light shining in the faces of millions of Americans, in every person who was part of our campaign, and in every one from every political party who believes that we must begin bringing our country back together and putting the United back on the United States of America. And so today, our campaign today for the presidency ends, but our campaign for a better America, a stronger America, a more just America, a more equal America and a more United American continues. And together we will get it done. Thank you.