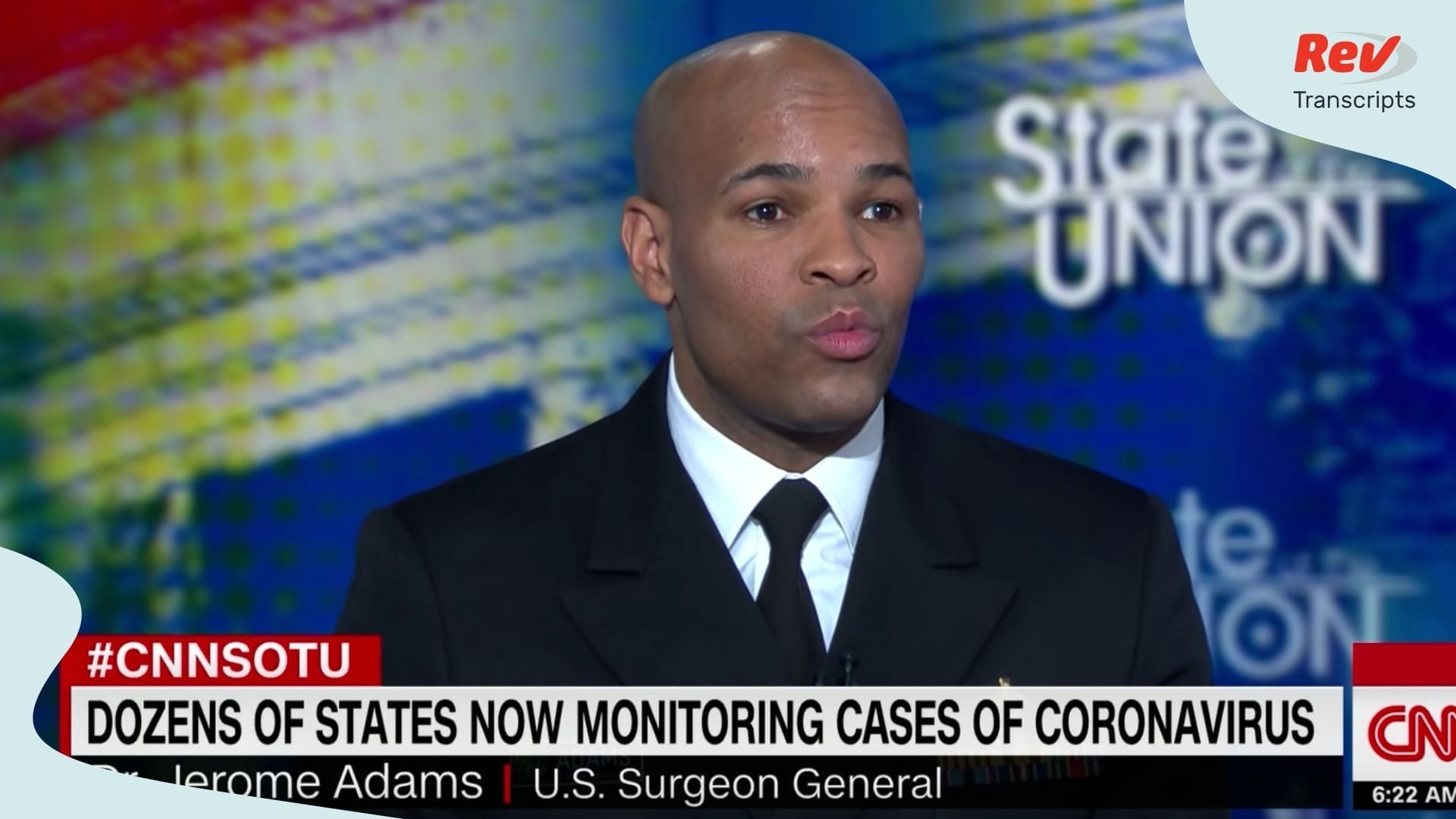 U.S. Surgeon General Jerome Adams did an interview with CNN’s Jake Tapper on the coronavirus. Adams praised Trump and wouldn’t give an answer on how many Americans had been tested for COVID-19. Read the full transcript right here.

Jake Tapper: (00:00)
The US Surgeon General, Dr. Jerome Adams joins me now to talk about this and much more. Dr. Adams, thanks so much for joining us. Six weeks into the crisis, a first responder tells me that he sees this with workers at one of the main clusters, understaffed, under trained, under supplied. How does that happen?

Dr. Jerome Adams: (00:17)
Well, we’ll quickly get into that, but I want to first to help the American people understand the novel coronavirus, which we’re talking about is a respiratory virus that comes from the family of viruses that cause the common cold, MERS and SARS. We’ve successfully handled those in the past and in most cases, 80% plus, it causes a mild disease, and one of the things we’re focused on is helping people know, who’s at risk and what they can do to protect themselves.

Dr. Jerome Adams: (00:41)
Now you mentioned that care facility. The vice president and a team of folks including Dr. Redfield, were out there just a few days ago. It’s important for the American people to know that this response, and in all states is led by the states with a consultation from federal partners and we are constantly in touch with them, making sure they’re getting what they need. We have CDC teams now at that facility providing care. The health and safety of the American people is of our utmost importance. Our number one priority.

Dr. Jerome Adams: (01:29)
Absolutely, and we’ve been saying this all along. Initially we had a posture of containment so that we could give people time to prepare for where we are right now. Now we’re shifting into a mitigation phase, which means that we’re helping communities understand you’re going to see more cases. Unfortunately you’re going to see more deaths, but that doesn’t mean that we should panic. It means that we should take the things that we know work for individuals to protect themselves, and make sure everyone is doing those things, like washing your hands frequently, covering your cough, staying home if you’re sick, and not being around people who are sick.

Dr. Jerome Adams: (02:01)
But it also means communities need to be thinking about things like, should we be canceling large gatherings? What are our tele work policies? Should we be closing schools? And that’s going to be different in Seattle, than what it’s going to be in Jackson, Mississippi. But communities need to have that conversation and prepare for more cases, so that we can prevent more deaths.

Jake Tapper: (02:20)
I agree that there shouldn’t be panic, but I also think there has been confusing information coming from… not from you but from other people in power. Take a listen to two top White House officials in the last few days saying that the virus has been contained when it has not been contained.

Speaker 3: (02:40)
This has been contained because the President took action.

Speaker 4: (02:44)
We don’t actually know what the magnitude of the virus is going to be, although frankly, so far it looks relatively contained.

Jake Tapper: (02:53)
So that’s not true. It’s not contained. It’s not relatively contained. Have you expressed your desire for people in the White House to share the facts, and be honest?

Dr. Jerome Adams: (03:04)
Well, this is a novel virus. It’s a new situation and the messaging quite frankly is hard. But here’s what I want the American people to know. From a public health point of view, and I am a public health expert, the first thing you want to try to do is contain the virus. Some parts of the country have contained it, meaning they’re preventing spread into their communities in the first place but-

Dr. Jerome Adams: (03:36)
Well, what we do know is that if we had massive numbers of cases, we would be seeing more deaths, and so we actually feel pretty good that some parts of the country have contained it. Just like when you look at the flu and when we look at the flu tracker, some parts of the country are having much more severe flu seasons. Some are having a very mild flu seasons. The same thing for coronavirus. So you want to first try to keep it out of your community. Once you know it’s in your community, you want to take the steps to prevent spread within the community and to keep those most at risk safe. A very important point here, we now know more about who is at risk. Average age of death for people from coronavirus is 80.

Jake Tapper: (04:38)
Well, the three people who might be president in January 2021, President Trump, Senator Sanders and Vice President Biden, all of them are in their seventies, all of them have had various health questions. Should those three stop traveling? Should they stop holding rallies?

Dr. Jerome Adams: (04:57)
Well, one of the things we know is that life can’t stop. And there was a great article in the New York Times earlier today about the social costs, the social impact of the draconian measures that have been taken in China. If people are going to go out there, we want them to be extra cautious. We want them to wash their hands frequently. And I was with the president on Friday and I just said, “Sir, when’s the last time you’ve washed your hands?” And he said, “I washed my hands just a few minutes ago.”

Dr. Jerome Adams: (05:20)
We want to make sure folks that are out there who are at risk, they’re taking extra precautions. But speaking of being at risk, the President, he sleeps less than I do and he’s healthier than what I am. And so that’s the other reason that this messaging is hard because there are 70-year-olds who run marathons and are healthier than some 30-year-olds. It’s really well focusing on the comorbidities, on the medical problems, heart disease, lung disease, immunocompromised folks, in addition to that combination of older age that seems to put people most at risk.

Jake Tapper: (05:47)
I want you to take a listen to something President Trump said on Friday when he visited the CDCs. He was talking about whether or not to bring a those infected Americans on a cruise ship off the California coast, back into the United States.

Jake Tapper: (06:17)
That was a shocking comment. I think a lot of health experts were stunned. Is the President’s desire to artificially keep the numbers low by keeping Americans who are off the coast out of the United States. Is that desire impacting health decisions to help save these Americans who have coronavirus or who could possibly have it?

Dr. Jerome Adams: (06:36)
Well, I don’t want to play politics here, but I do want to say I’ve been in the situation room every day. When the president comes in, he makes it clear that he wants the best advice from his health experts. As far as the cruise ships are concerned, our priorities are number one, making sure people who are on those cruise ships and who need medical attention can get it. And we’ve flown people off the ship. We’ve flown CDC teams into the ships to help. Number two, we want to get people off the ships as quickly and as safely as we can. Number three, we want to protect our communities, and that’s a delicate balance that requires the cooperation of many different partners, Department of Defense, Coast Guard and others. But again, we want to make sure we’re taking care of those people on the ship in a way that protects them, but also protects communities.

Jake Tapper: (07:19)
I understand you don’t want to get into politics, but can you assure the American people that decisions are not being made just because the President wants to keep the numbers low, as opposed to helping Americans? I mean, that’s what he said directly. He doesn’t want to bring them in because the number will double. That’s not a medical decision. That’s a public relations decision.

Dr. Jerome Adams: (07:35)
Well, what I can say to you, is based on my experience being on the task force for about a week and a half and being in that situation room every day, that the medical input is taken, tony Fauci, Ambassador Birx, Bob Kadlec, myself, Ben Carson. You have multiple doctors in the room and our voices are in no way, shape, or form suppressed. As a matter of fact, the Vice President usually starts and ends by saying, “Doctors, is there anything that I need to hear that I’m not hearing”

Jake Tapper: (08:02)
Can you tell us how many people have been tested in the United States?

Dr. Jerome Adams: (08:05)
The numbers are tough because they’re changing minute by minute. But here’s what people should know.

Dr. Jerome Adams: (08:09)
Well, but here’s what people should know about the testing. They should know that we have 75,000 tests available right now for folks. By early next week, tomorrow we should have over two million tests available. By the end of the week through partnerships with private industry, over four million test available. But the most important number to the American people is one. They want to know, “If I go in, can I get a test?” And the one thing that I’ve heard, I’ve been to Georgia, I’ve been to Florida, I’ve been to Connecticut in the past week, is that no public health doctor who is asked for a test has not been able to get a test.

Dr. Jerome Adams: (08:57)
I would refer you to the CDC for that because again, the numbers change so rapidly. I don’t want to give you a number.

Jake Tapper: (09:02)
They took it off the website how many people had been tested. They removed it from the website.

Dr. Jerome Adams: (09:05)
Well, actually I would direct you to the transcript from the conversation that FDA Commissioner, Steve Hahn had yesterday where he have very specific numbers. Important thing for the American people to know, again, is talk to your healthcare provider.

Dr. Jerome Adams: (09:18)
If your healthcare provider thinks you need a test, there’s been no indication I’ve gotten from around the country that folks can’t get it.

Jake Tapper: (09:24)
Yeah. The FDA Commissioner gave a number that was in the five thousands but it was how many tests have been given not how many people have been tested. We’re still waiting for a number on that.

Dr. Jerome Adams: (09:31)
Expect millions more with the capability to be tested by the end of this week.

Jake Tapper: (09:35)
Millions more, but the capability end of this week. All right, Doctor, thank you so much. Appreciate your time today.